Blessed be the fruit, ladies! Are you ready to roll The Handmaid's Tale S1:E2? Yeah you are, let's go under his eye to a dystopian nightmare where women are breedstock and men are either gross or suspect.

I just now realised I would be a Martha.

We're in the bedroom with three fully-dressed adults having sex; that's what religion has done to this future world. It's removed all the fun from sex and replaced it with shame of the misogynistic variety, trust.

Offred (Elisabeth Moss) reminisces about the past while Commander Waterford's matter-of-fact demeanor makes me laugh.

Not because it's funny, however, it's the absurdity. Offred meets Ofglen (Alexis Bledel) at her gate, time for shopping. First a stop at the river. 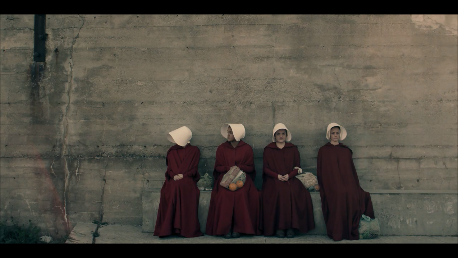 Where they're switching out the hanged people, honestly. I know you can get used to anything, but the bodies are RIGHT THERE.

Offred and Ofglen ditch Ofsamuel (Jenessa Grant) and Oferic (Bahia Watson) so they can have a real talk. Some chitchat about the past: June was an associate book editor and Ofglen (no real name yet) was a scientist / professor? Anyway, her two ovaries saved her from being rounded up with the rest of the intellectuals, yay her?

The tone is flip in a way I am not digging. When Offred says "I wish he'd f*cking hurry up" in the first scene, it makes us start-laugh, but her "it sounds amazing" about her previous job editing seven books in a series about falconry made me wince.

They see a beautiful old church being destroyed, Ofglen heard St. Paul's in New York was completely erased: Offred wants to know how she can know that? And how can she know there's an Eye in her house??

A van pulls up and a man is dragged off; it's okay to be relieved, Offred. Ofglen offers Offred a place in the resistance, "with Us", all she has to do is report on Commander Waterford. The rain starts as Ofglen takes her leave and Offred ponders the nature of what has become.

"It doesn't seem as though it should be the true shape of the world."

There is an Us because there is a Them and that seems straightforward enough.

Back at the house, every move is weighted. Nick (Max Minghella) watches Offred.

He warns her to be careful; her extra time today with Ofglen isn't wise. The Commander wants to see her at 9 pm, don't be late.

The Handmaids are forbidden to be alone with the Commanders, they aren't lovers but rather walking wombs; neither can she refuse a command, so? As she's pondering her options (she has zero options), a red vehicle outside draws her notice. Rita the Martha (Amanda Brugel) brings her coat, the Birthmobile won't wait all day. They smile at each other in a nice moment, trying to get Offred dressed: Rita will pray for good news.

The Handmaids are all packed in the back of the van; some are excited about Ofwarren / Janine (Madeline Brewer) and her baby but the odds are still stacked against them. Only one in five babies makes it. Offred flashes back to when she was June and giving birth to Hannah, supported by Luke (O-T Fagbenle), the hospital ringed with hordes of praying people.

I thought I'd be prepared for anything on The Handmaid's Tale, but for some reason watching the wives of the Commanders help Warren's aged wife pretend to give birth was jarring. It is almost obscene in it's absurdity.

Serena Joy (Yvonne Strahovski) is among the wives, so Offred beats it upstairs where Janine is being encouraged in much more strident tones. Offred comforts her while flashing back to Hannah's birth.

SO TINY AND PERFECT. And healthy! "Praise be" says the nurse and we all flinch, don't we?

An eerie moment in the nursery; there are no babies. Two went to the intensive care and the others are with God, which cannot be good for new mama June's nerves.

You can start to see why people got so scared.

She walks out without swallowing as the wives gossip about the "little whores, all of them." She spits it out in the bathroom; smirking at herself. She still has her dignity and it won't be sold for a crappy orange macaron.

Oh great Aunt Lydia (Ann Down) is leading the charge in the delivery room (aka a bedroom upstairs out of sight) and Janine isn't doing all that well. I just remembered then that they don't care about the women, only the babies, so I'm super worried about one-eyed batshit crazy Janine.

She is led to The Chair and then it's time to push! As a group and then the Commander's wife is brought in to creepily pretend to push behind her while almost sitting on her shoulders. Everything starts to move slowly as she pushes and pushes and then we all hold our breath.

A healthy baby girl, yay! Oh I don't think bringing another girl into this world is anything to celebrate: welcome! You're a slave! I just recognised the new "mother" Naomi Putnam (Ever Carradine) who I called aged but is two years younger than me.

Offred comforts Janine, whose baby is taken to her new mother without Janine even being able to hold her for one minute. Mrs. Putnam names the baby Angela while Janine cries.

That's what the Handmaids are really there for.

In the past, June wakes up alone in her hospital bed, where's Hannah? She finds Luke, but no Hannah and just as she's starting to get alarmed, a real alarm sounds for a Code Yellow. Luke runs off, June limping as fast as she can; someone has murdered Nurse Tania (Karen Robinson) and stolen Hannah.

That someone hasn't made it very far, but she has the very delicate infant in her hands. Luke gets the baby away from her and she's arrested violently while June tries to calm down baby Hannah. Jaysus, so they lived for 8 years like this?

Offred wakes up in the back of the red van full of dozing Handmaids; Ofglen wasn't able to find anything out about what her Commander wanted, that seems dangerous to talk about it openly. She warns Offred to not trust Nick, Offred lobbies back Nick's warning about Ofglen. He's not wrong, you can't trust anybody in these times, "especially a c*rpet-munching gender traitor."

I was wondering how feeding the baby was going to work; Angela is brought to Janine for breakfast and we all cry as she tells Angela about her brother Caleb and sings "Don't Worry." Because every little thing is not going to be all right.

I did worry for a moment that she would hurt the baby, but just a peaceful nursing scene with the subversiveness of not having given up ownership of her baby.

It's the hour of 9 o'clock; the bells chime as Nick watches Offred close her blinds and start her trek to the Commander's office. She wonders if this is like a horror movie, an oblivious, moronic girlfriend about to meet her bloody end instead of an expected sexy prank.

Commander Waterford (Joseph Fiennes) bids her to sit; she scans the room as she crosses, trying to find out its purpose and why she is there. It's full of books, encyclopedias, all knowledge. I'm looking for her seven volume series on falconry. In Gilead, women are forbidden to read. Gives them notions.

He gives her permission to look at him (gosh thanks, Mr. Big), but she's not just there to gaze upon his countenance: he wants to play Scrabble. They start the game; her pleasure is obvious when she realises she has a word, a good word, to play and looks up to see him drinking it in. She's let her guard down and I can't say I blame her for losing it over a word instead of a bullshit macaron.

He barely beats her; they have some fun banter that gets gross and hilarious at the same time right here:

O: I'll check my schedule (about playing another game after he gets back from a trip)

CW: see if you can squeeze me in.

She keeps presence of mind enough to ask about what he'll be doing while away but he gives away nothing specific. Some definite flirting later, it's a date and she's got to go home.

It looks as though his hand is a spider, trying to gather all of her in with it's creepy legs.

And then she's outside and can breathe. WHAT'S THAT ABOUT??

She breaks out laughing back in her room, "wow."

The next morning, Simple Minds "Don't You Forget About Me" plays as Offred has her mojo back, timing her walk to the gate so as to walk partway with Nick, who is all burning eyes and bushy eyebrows. She can't wait to tell Ofglen about the Commander's trip to Washington, she's already got intel one day into the spy game!

But it's not the Ofglen we know waiting at the gate. Offred stammers a greeting then inquires about our missing sneaky member of the Us.

And we're out to Offred's silent "F*CK."

I entreat anyone who hasn't watched the show to do so; the visuals are stunning and so much is done with light and pattern representation that it's almost a completely different show written.

The shot of Janine being comforted by the Handmaids is a beautiful contrast to those same women closing in over the alleged rapist. You can feel the grief in their bowed heads as keenly as you can feel their rage in the red mass.

The Commander and the wives both believe they're kind and generous people for sharing what they have with the not-considered-human Handmaids; that's how it is with racism and misogyny. Your typical virtue signaler, maybe a man who calls himself a capital F feminist; your general overstuffed Liberal: LOOK AT ME, TREATING THEM LIKE PEOPLE. MOST OF THE TIME. Except we were always people, whether it suited you to acknowledge it or not, so that rage response instead of the praise they were expecting is probably pretty confusing to them.

The Commander's decision to flirt and court Offred is particularly grotesque as she has no say in anything. Any compliance or implied consent she gives is tainted by the fact that he is literally her jailer. He jeopardized her life by inviting her to that Scrabble game; good for him if it makes him feel like he'll know her a little better at the next Ceremony. "A soul to make the hole much deeper" as sings Alanis Morrisette.

To be honest, that's why I haven't giffed the Ceremony scenes directly, as visually stunning as they are. Are they consensual?

From Offred's standpoint, you can see how she would carefully grasp at this chance to be treated like a human again; even if the stakes could include her own death. This is life under a regime of oppression, and not so different from where we are. Well. Different from where you and I are, but not very different from other parts of the world that I shouldn't speak out of my ignorant arse aboot.