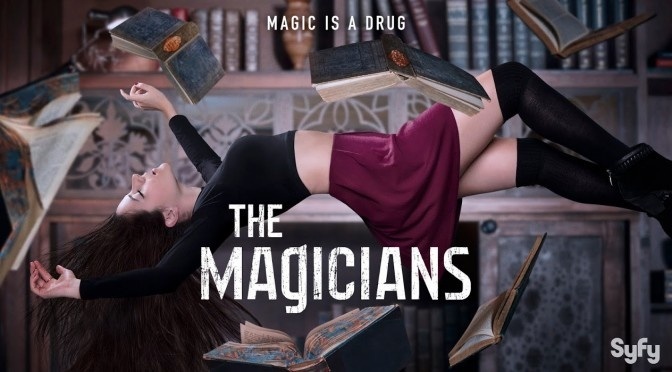 We're getting closer to caught up on The Magicians, y'all! Okay, we're still a couple back, but let's focus on the positive. All the spoilers behind the break!

We're rocking out with Eliot, who is making bevvies for his boyfriend Mike, who only wants beer. He's lucky he's pretty...and we ALMOST getta nother kiss, but Quentin and Alice come up and RUIN it.

They grab the cocktails and Eliot can tell right away about the banging, which they both awkwardly deny and they're off again. Walking away, Mike is looking at Quentin and ELIOT CALLS DIBS ON HIM!! Woo hoo! Queliot shippers everywhere rejoice!

Quentin tries to get round #6 going, but Alice actually meant she wanted a nap, not a "nap" and she says it was just a combination of stress and hormones and blah blah she isn't down to bone, Q. She wants to know if he's in love with her and easy there,Tiger! Pump the brakes! She thinks the fox enchantment is still on them, though, they need some time apart to figure out what is real and what's magic.

Professor Sunderland is going over the star constellations when an extremely wet Penny magicks in.

She's giving him a talking to after school but sorry, was too distracted by the whole shirtless-Penny thing. She's concerned that he isn't following the school's plans for him, or any teaching, really, but he thinks this makes him a man. Still not wearing a shirt. I keep expecting him and Professor Sunderland to make out and he makes a move! He asks her to Travel with him, and offers to teach her a few more things besides. She declines, but she doesn't wanna....

Quentin's figured out a way to get into Alice's study group, extry deodorant on hand! Penny arrives and wants to know why it smells like Axe Body Spray?

Mike and Eliot are sleeping when a giant Beast moth comes in, drawing Mike down the hall to see a tiny little bunny awww! Mike picks it up, it's so adorable and cute and inky dinky WHAT THE FCUK, MAN?? He strangles it, then rips it's head off and pulls out a blade? What's going ON??

So Julia did go to rehab, she pens an Amends letter ("I've given up magic. You suck") to Quentin while practicing her 100-yard stare and guess who's come to see her? NO, GUESS!!! Marina! She just wants to talk, but Julia wants to know how she feels about killing Hannah? Marina claims self defense (I only wish I hadn't been put in that position - nice!) and apologizes! Whut?

I JUST SAW THAT MACKENZIE ASTIN IS IN THE CREDITS AND I AM SO EXCITED!!!!!! Oh, and I'm old, if that totally didn't give it away.

Marina wants to join forces, when Jules sticks to her pouty guns about no more magic and sah sorry Quentin, she threatens Julia: come after her and she'll kill her and everyone she cares about. Well, whoever is left...and come on, was that really necessary, M?

Dean Fogg is getting his hands checked, they've been in weird bloody-looking casts since The Beast broke them (and stole his peepers), he's good to go! Make some magic! He can't just yet, and I don't really understand why The Beast didn't attack while he was out of commission? Maybe he isn't important. Anyway, he'll teach his own damn self magic, thankyouverymuch, just like he did when he was four. He doesn't need your help OR pity, ladies!

Eliot is frantically packing, he has NOTHING to wear! He doesn't want to repeat any outfits for Mike and Margo is still in Ibiza. Quentin tries to help, but he's kinda Anne Hathaway in The Devil Wears Prada and doesn't get it. He is concerned how much Eliot cares, though.

Back at rehab with Julia, group therapy is starting and she comes over to shit all over it. And explain that religion is a crutch. AND goads the chaplain and I understand that there are people that really like Julia's character, but no, that's a lie, I don't understand? The chaplain challenges her to think about what she believes in that is bigger than her.

Alice and Quentin are working on homework, they have to figure out the spell and what it does based on the ingredients required. There's a fern, nope, not a fern, and really, it's so Penny can tell those two to knock it off. And tell them everyone saw them bone as foxes in the snow. He tells Quentin to step up his game or back off entirely, nobody wants to be pursued in a half-ass manner.

Eliot is cooking for Mike, who is overwhelmed by Eliot's knowledge of wine and food and he's worried he's going to bore our Eliot. Eliot takes him aside and explains his...less than fancy beginnings and this must have it's own line:

"Becoming me was the greatest creative project of my life."

Dean Fogg practices while Penny and Quentin work some more outside. Side note: they have some REALLY cool looking spells set up all the time, I wanna see those!! Mike appears, saying he's lost, and then pulls out a knife and goes at Quentin. Penny jumps in and ends up stabbed for his trouble, just before Q gets his finger casting right.

Penny's in surgery and they've tracked down Mike. Dean Fogg is with him in a "clean" (no spells allowed) room; he wants information! Mike says he was in Brooklyn and now here and he doesn't KNOW!

Eliot and Quentin are waiting outside the room when Dean Fogg walks out, what's going to happen? There is a circuit court just for magical crimes, they need to know if it was Mike or if there was mind control, all the scenarios must be looked at. Eliot looks poleaxed.

Penny is trying to be all tough, stomping out of bed, saying "I was stabbed, woman, I'm gonna find the mother..." when he falls to the ground; looks like that knife was poisoned as well.

Quentin and Penny are bonding after (Q owes him a Wookie Life Debt, Penny 100% wants to stab Q himself) and brainstorming, could it be The Beast? And where is Kady?

Eliot talks his way in to see Mike, what he really wants to know is: if he was blacked out attacking Quentin, was he blacked out when meet he met Eliot?

Richard the chaplain (oh sweet baby Jeebus, that's Mackenzie Astin! I am so old) is asking Julia about her tattoos, he knows all about those magical markings. And Brakebills and he calls magic a set of tools left behind after Creation for humans to find. He has some kind of connection to all of it, and leaves her with a note.

Alice is pity-visiting Penny; and I'm just gonna say it: if Penny wasn't so FECKING HAWT, nobody would ever talk to him ever because he is a straight-up one-note ahole. Just then, a giant worm extrudes out of his wound. Er-oooh. Get Quentin!

This side effect is vines, not a worm, and it's in Fillory; Quentin is the expert! He knows how to fix it even! Is it wrong that I immediately think this is exactly the point of the attack, to get Q to try and mess up a spell like when Julia and Marina broke in and the point of their spell was to get the shield lowered? We'll see!

Quentin says in the books, Jane was saved by burning her doll; the Curse of the Virgo Blade accepted it in exchange. So they burn a doll that looks like Penny; nada. Those vines are SO gross, yo.

Eliza is in Dean Fogg's office when he returns from the Healing Ward; she knows all about the Virgo Blade curse and wants to know why she wasn't called in previously? Dean says this is her mess and once it's cleaned up, she is never to come back to Brakebills again.

Quentin follows Eliza through the gardens; he wants to know: is Fillory real? Of course it is, she says, like duh. Then why no Beast? Because they're a child's drawing of Fillory and I love that expression. I feel as though Roald Dahl made child's drawings of the world.

The Beast wants control, of course, and maybe Quentin will find one of those ways into Fillory and he's not having that. Remember that book that Eliza gave Quentin, Fillory and Further, Book Six? Why hasn't he tried to find it again?

Eliza does explain how Q misunderstood the doll in the curse, though, it's importance wasn't that it looked like Jane, it was the single most important thing to her and that's why the curse accepted it instead of Jane's heart. So what is Penny's most prized possession? Q can't find out, Penny's gone all rigid and stare-y.

What Richard the Chaplain handed Julia was a spell, it looks nicer than the back alley stuff she was working through with Hannah and Marina. She doesn't think it worked, but then, as she beseeches, she is raised above the chaff.

Quentin and Alice are tossing Penny's room, but they don't know what to look for and they're still dealing with their own sturm and drang, or rather, NOT dealing with it, so it gets shouty tout suite. She wants to know: what's his special thing? Hers is a quilt covered in cats, and his is, predictably, a first edition of the first Fillory book. She says predictable isn't bad and it hangs in the air.

They find the chocolate bar wrapper that Kady gave Penny in Brakebills South, let's give it a try!

Julia braces Richard, what the Sam Hill was that? It didn't feel like she was casting and he says that's because she wasn't, it was a prayer. To a local harvest deity, and that's why the grain and chaff simile! She's been hanging out with people who handle magic like a drug, dealing it, selling it, fighting for it, but it doesn't have to be that way. He's an example of that, he's a great magician and he doesn't hurt people with his magic.

Eliza is talking to the Beast through Mike, ohhhh! She is Jane Chatwin! And he had the power to walk out whenever he wanted; he was just waiting for her. He hits her and then he strangles her! Until her head explodes! WHUT??

Holy shit, Mike comes out to find Dean Fogg, who he dispatches and then is finally stopped by Eliot, who delivers the coup de grace.

A shaken Dean Fogg is drinking in his study and looks to be packing when Quentin bursts in and braces him as to what they're going to do next time The Beast shows up?? Dean says there aren't any answers and who can tell what will happen.

Quentin returns to the cottage to see Alice, who is so worried about him! And he gets it, and then he gets her, kissing in the hallway before she takes him upstairs and our couple is together. And we oot.

So. Poor Eliot. Eliza was Jane but is now gone, The Beast means business for reals and nobody has any kind of a good idea of how to get rid of him and OH!! That bunny had the blade inside it! That's why Mike killed it like that! Quentin and Alice are a couple, Kady is in the wind but at least Penny is presumably all better. Catch you next time for some super gross magic action, little charmers!

***All photos were borrowed from Tumblr, thank you very much davinafray!