This is it! Something we've been waiting all season for: the ACTUAL Top Chef Finale!! Padma said it and everything in the promo so I know I got it right this time! Woo hoo! Let's see which of our chefs rises to the top; I dig the fact that we're in an all-female finale, let's see who takes it!

It's veteran chefs Brooke Williamson and Shirley Chung battling it out in the last moments; who will be Top Chef of Charleston? HGM and Me and allllllll #TeamBrooke but Shirley's been surprising me lately, although not enough that I want to eat any of her food.

We open at the resort, Secrets Akumal Riviera Maya looks lovely (hard pass) but I still haven't figured out why it's called Secrets. Nothing on their website gives any clue, do you have to wear a mask? Or have embezzled something recently? What's the dealio?

Brooke is READY but also of that same Jeremy mindset from last year: second place is the first loser. I'm trying to think why that bothered me so much last year. I must have recently lost something competitive. Because why would you go on a show and not want to win? I think it was that he was drilling that mentality into his kiddo. ANYWAY, Brooke knows what she has to do: "cook better than Shirley" she says to Shirley's face.

The table they're eating on is one long slab of a tree, beautiful! 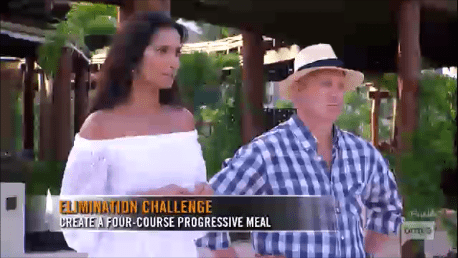 The challenge seems pretty straightforward, yes? Four courses head to head and hey! All the old chefs are back! I think ALL of them! Which means that they all got a trip to Mexico out of the show, that's ossum.

I'm happiest to see Jim Smith, who left far too early as far as I was concerned. The chefs only get to pick three sous chefs, though, so what happens to the rest of the cheftestants? Pool party time, y'all!

Shirley gets first pick and the team breaks down thusly:

Shirley: Casey (which was very obviously an attempt to sabotage Brooke), Katsuji,

Brooke: Sheldon, SAM! Sam Talbot!!! Of the unfortunate bought-bread situation, how AWESOME to see him in play again!, and

But wait! Padma and Tom are choosing the chefs third sous chef, what? Me and Brooke: interesting

You learn to use so many OTHER words than you want when you have children! Everyone knows what "stinker" really means, right?

Oh but it's a good thing! They're not stinkers at all! Top Chef has brought each chef's right hand man to be their third helper! Shirley and I cry

Shirley and Brooke strategize with their teams and I think it's interesting that they are using two very different approaches. Shirley is creating a menu of food memories (including Top Ramen??) but Brooke is letting the local ingredients do the heavy lifting. It's difficult to see which way would be better, since cooking infused with your own personal story is always best but so is using whatever is freshest and nearby. So. We'll see!

Shopping time! Shirley's screaming again, Brooke would really, really like her to take it down just one and a half notches, please.

Brooke made a rookie mistake, though, she forgot to order pork for her pork and beans. Um. Luckily Shirley ordered some pork belly as a backup plan, she should be able to share some with Brooke. Like the way Brooke would totally share the title after if she won on that...SURE

Any other show and I would be shouting PRODUCER MANIPULATION from the rafters right now but I think they keep it relatively real here.

Speaking of reality show producer shenanigans; since I stopped watching shows like The Bachelor (okay I only watched it one season anyway, and that was with a group online so I wasn't exactly a regular or anything), I find I don't really want to watch unREAL either, since it's sort of ipecac for the other. I really enjoyed unREAL while watching Bachelor in Paradise but after, ehhh. Buying into or debunking a fandom: you're still spending a lot of time thinking about surely manipulated situations, yo.

Back at their swank room at Secrets; Shirley and Brooke are talking about the next day, Shirley putting Brooke on notice that she might not be able to share that pork belly if her baby piglets (seriously) aren't up to snuff.

They head over to Dream Tulum for supper, their families are there!! Brooke's kiddo is adorable! She's SO laidback and so is her family. So I'm not the only one excited about a all-female Top Chef finale, this is only the second time in Top Chef history and Brooke has been in both. Can't keep a good woman down! Watching Brooke and her son Hudson, Shirley wants one too!

Shirley has assigned all of her team to certain roles but Brooke's much more of a macro manager: do what you're most comfortable with! She's still complaining about the pork belly but Shirley doesn't have to give you her pork, lady. You were supposed to order it from the hotel, Shirley isn't going to give up an ingredient in the Top Chef finale because of your mistake.

Brooke has incorporated a bit of herself into her menu too, it's not just local and fresh. She's trying to capture a feeling from the past with her oysters and MAN I wish I could understand why people would put those slimy bits of corporeal ooze in their faces.

Shirley is STILL screaming away, honestly. Brooke is so tired of saying "Shirley, can you keep it down?" but Sam actually thinks it's good to know what your competitor is up to. That might be true if you were cooking the same thing, but not if you're trying to prep and SHIRLEY KEEPS SCREAMING ABOUT HER DEAD BABY PIGLETS.

How does baby piglet end up on any menu? You know people keep those as pets, right? They made two movies!! It's like you're serving Lassie!!

Shirley struggles with her top ramen noodles, she's added an extra ingredient for chewiness but she can't get the pasta machine to lock down. She uses Katsuji as a clamp, that's about right. *xxxxselfeditingcommentxxxx*

Brooke's flan isn't cooking at the right speed and who cares, we're into tasting!!! We've got judges Daniel Boulud, Gail Simmons (in a rocking red dress, woo hoo!) as always, Graham Elliot, Jonathan Waxman (where do I know him from??), Nilou Motamed, the new editor of Food and Wine magazine that we met earlier in the year, Martha Ortiz and Joachim Splichal whose name probably doesn't sound like all of us would pronounce it. I missed one: Jonathan Sawyer (whose name we can totally all pronounce) is there too.

They all like Shirley's menu, it's so personal! She definitely connects to the emotional side of food. And her mom is there! Her mom that didn't want her to be a chef and was such a perfectionist, gah! Shirley and I cry again.

Brooke's parents are also there, totally chill and I'm pretty sure her dad is Albert Einstein. First courses! Brooke has made a warm oyster 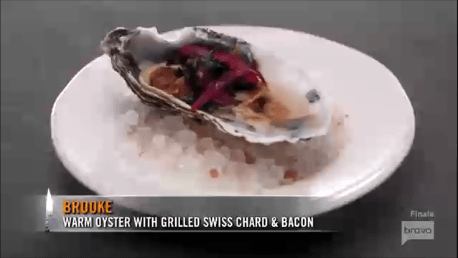 Up against Shirley's snapper crudo with story 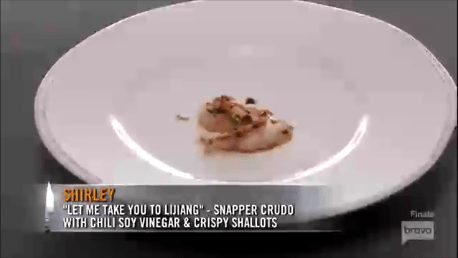 The judges as slightly less impressed with Shirley's tiny crudo; Tom Colicchio says it's not possible to get all the flavours in each bite. John Tesar calls Brooke's dish "soignee" and that was a challenge last year! Woot! 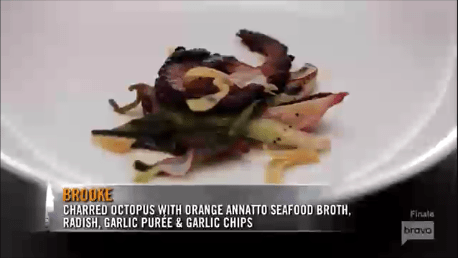 Against Shirley's next cutesy-named dish of Top Ramen 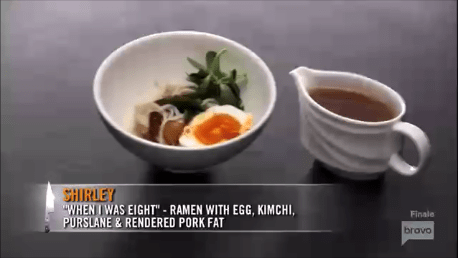 But Shirley's ramen much less. The broth was flat and the noodles were "not supple" which I don't understand but will dutifully transcribe.

Shirley is up first for the third course and I just. I just don't understand why you'd use a baby pig!!!! And a sucking one at that! Rip it away from his or her mama so you can use one tiny portion and I'm sorry. Sometimes I'm a terrible carnivore 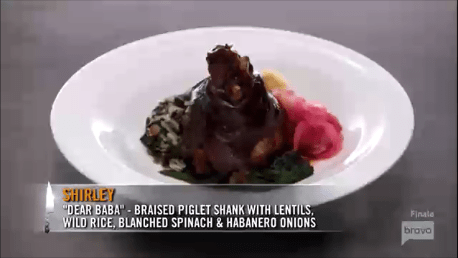 Brooke made pork and beans 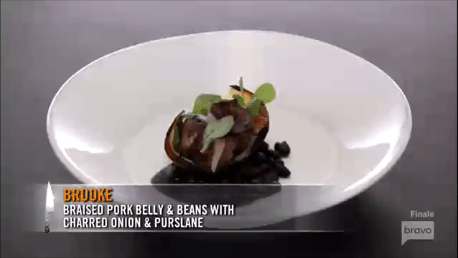 Padma loves Shirley's gutsy pork shank; Jonathan wants to know if he can judge on size?

Tom loves the rice, Joachim digs the pork, it's going very well for her. Brooke gets good reviews as well so nobody knows how that course will shake out.

Dessert time! Brooke's long-cooked flan is for her mom, who just won her second flan cookoff!

There are flan cookoffs? 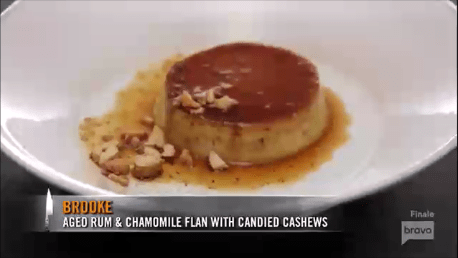 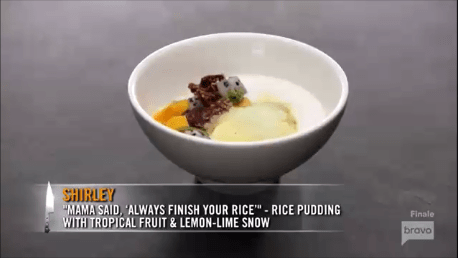 Brooke gets read for her dessert, it doesn't get good reviews at ALL. Shirley's mom practices saying "I'm very proud of you" in English with her sister and we cry some more.

Brooke doesn't cry at all, of course, she calmly stands around with her non-crying family and discuss how much her dessert sucks.

And now we're in deliberations! Brooke owns her "smack in the mouth" opening dish but they handle Shirley with kid gloves. Padma liked Shirley's dessert the most, it was her favourite plate of the night. Shirley cries and me and Brooke look sad.

The judges talk it over while Brooke and an oddly calm Shirley drink wine in the back.

And the winner is:

First Tom wants to thank the chefs' parents for raising such great people and talented artists, THEN we get

The winner is: Brooke!!!

She was so calm!! So chill! Shirley had her heart on her sleeve, I could almost taste how much she wanted it and somehow we're crying AGAIN! But this time Brooke and her family are too, so it's okay.

Congrats Top Chef Brook Williamson!! HGM and I had her picked out as a front runner early on, woo hoo we rock too! By association. Until next season you guys! Thanks to everyone who read along. Cheers