Hi everyone, sorry I'm late! I've had a super busy week and am just getting to Top Chef now, so let's not waste any more time! Woo hoo! Rolling S15:E07 after the break.

We open in the aftermath of Brother Luck's elimination, Joe Sasto III was also in the bottom and is feeling the heat. He finds the solo challenges difficult and my head turned completely sideways at that observation. Gurl: that's what you're HERE for! We also lost Lee Anne Wong as she was having some complications with her first pregnancy.

Last week's winner Tanya Holland is generous in her assessment of Joe's progress, it took her awhile to find her voice and he will too! In his case, he has a massive amount of knowledge of fun ways to manipulate food and he threw them all up all over some poor German food. He needs to learn to winnow.

Tanya is working on equality for young women of colour in the industry; she didn't have anyone who looked like her that could mentor, that's her focus going forward.

But hey, cheftestant Bruce Kalman got an exciting call from home!

He and his wife are expecting a baby through a birth mother, whose water just broke! The whole gang stays up late waiting with Bruce and we get Jade Paul!! Welcome! 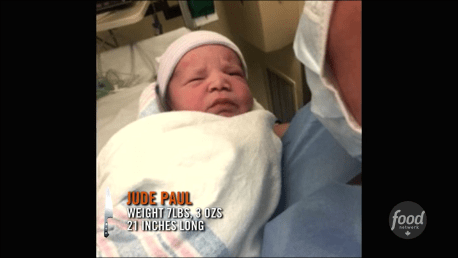 I LOVED Brooke and the expertise and chill vibe she brought to the show, I recapped it and you should totally read those. I'll wait. Gonna make myself a cuppa, ping me when you're done.

ANYWAY Bruce and Brooke are really good friends (course they are, because Bruce knows absolutely everyone) and everyone is so excited about the baby news! That isn't why they're there, however.

Brooke looks FANTASTIC! Not that it matters, I know I know, but she's totally glowing and I dig the braid! 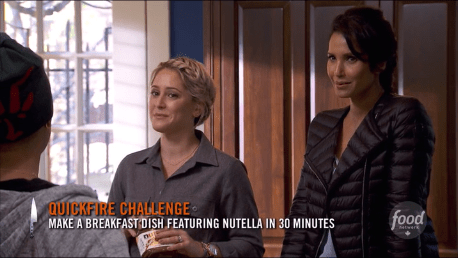 It's a Breakfast Quickfire Challenge with Nutella; they'll be cooking in their own kitchen with whatever is there. The winning chef gets immunity and $5,000, givver chefs!

The chefs fight over space and eggs while Carrie Baird explains her spicy eggs benedict idea and I'm just glad for her that this isn't an elimination challenge because that sounds DISGUSTING. Adrienne Cheatham likes her breakfast with her adorable boyfriend (they are a smoking hot couple) a little more Bloody-Mary-ish.

Everyone is working like crazy in this massive kitchen that looks super tiny with 9 chefs frantically whipping eggs above every available inch of space.

Last week Claudette Zepeda-Wilkins wasn't able to get her octopus on her plate in time to be considered for the challenge, this time it's Adrienne whose time management was off by a minute and she has no Nutella syrup to go over her waffles. There will be no 5K for her. 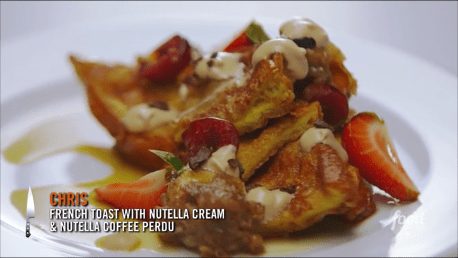 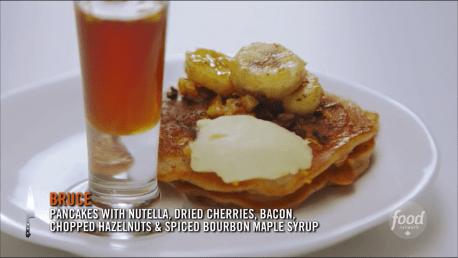 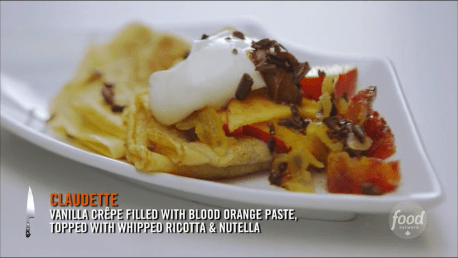 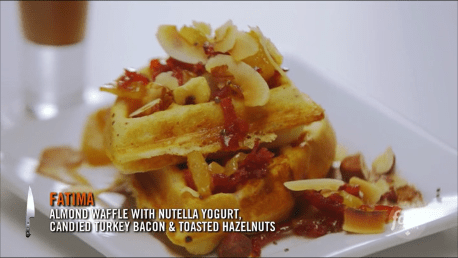 Fatima Ali, Claudette and Carrie are in the top and it's Carrie who wins, which means that I have no taste. It's okay, I can admit it.

Padma says goodbye to Brooke and asks the chefs if they're ready to play some games? Team USA spirit time! Fatima promptly loses her shite over Meryl Davis. 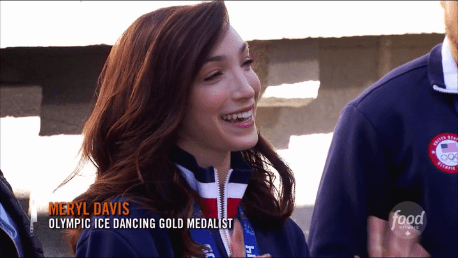 She's not the only Olympiad athlete there, we also have: 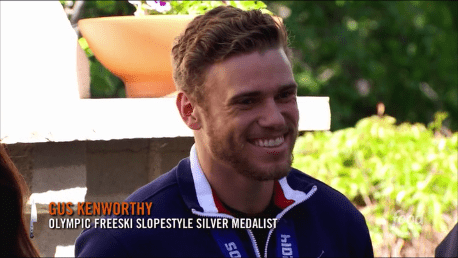 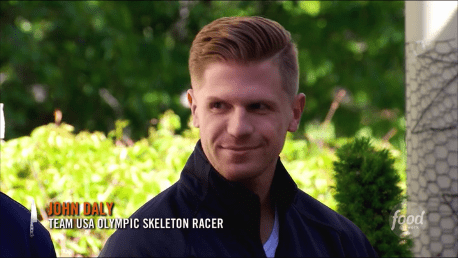 The chefs will be competing in teams of three head to head in front of everyone. There are three rounds like zo: 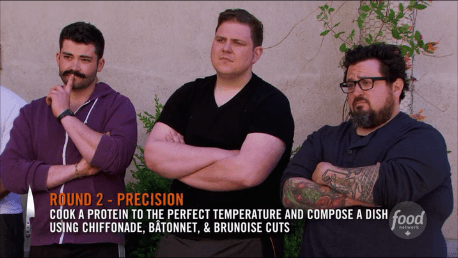 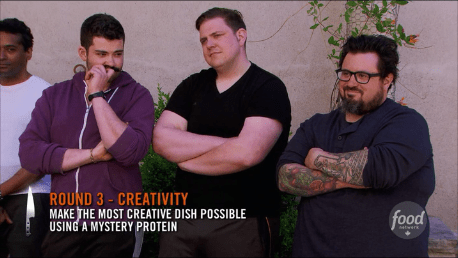 They get to pick their own teams, the Bears of course and then everyone else. Chef Chris Scott is feeling some kind of way about the Bears, but he's happy to be with Claudette and especially Tanya.

SINCE WHEN IS SASTO A BEAR? He weighs like a buckforty!

The teams strategize then we head to Whole Foods to get their Hemp Hearts hand-peeled by Ecuadorians making a living wage. I learn that Adrienne and I are sous-chef soulmates. Years ago (LIKE SO MANY YEARS AGO) I was a sous chef in several restaurants except I never worked anywhere fancy enough that they called me a "sous chef." Prep cook for the win! And I loved reducing ingredients down to uniform stacks of foodstuffs, just like Adrienne does.

The Bears eat their way across Whole Foods, how did they have time to shop?

Carrie, Adrienne and Fatima are in the other team, they strategize while Claudette talks about supporting their team's first leg, which is her speed round.

Bruce is struggling, he wants to be home with his bebeh! Go, Daddy!!

It's showtime! Judges Tom Colicchio and Gail Simmons are ready to eat! Tom asks the chefs what temperature they will be cooking their meat to, Tanya says 145 for her lamb, which gets a "WHAT" face from Tom and some bad news across the board. They have to turn in their thermometers and will be judged according to what they just answered.

Tanya isn't happy with Claudette because she's asking for a lot of help and Tanya's trying to get her prep groove on. Tanya is mad and she's not helping Claudette plate her dish, which every other team is doing.

There is more discord on the White Team, I don't understand the animus between Tanya and Claudette. Tanya claims she's disorganized because she had to help Claudette so much during her round and I don't think we saw that. We saw Tanya be pissed about helping but we didn't see a lot of that help. And where is Chris in this?? I'm concerned about the energy of this team.

I also have no idea why Tanya offered to do the Precision Round for her team, she's an amazing chef (TWO COOKBOOKS) but we've been over before how long it's been since she does prep work herself. You remember, since France in 19mumblemumble!

Now it's time to check the temperature of the meat. Adrienne was aiming for 125 degrees for her filet (which made me very worried about Tanya's 145 degree lamb) and achieved 115 degrees, losing 3 points for her 10 degree difference.

Joseph Flamm is next at 158.5 out of 165, losing two points and yeah: Tanya is down 20 degrees with her perfectly cooked lamb at 125 degrees. Tom asks her where she got 145 from and she's all: I dunno and he laughs and it relieved some of the tension.

The Olympic athletes think it's mad hard to cook to temp without thermometers and YEAH IT IS. It would have been good if Tom or Padma had mentioned that was part of it.

The White Team is in trouble. It's up to Chris to pull them out, but once again I have to wonder why he hasn't been visibly helping until now, although he probably had the most technically challenging dish, being Freestyle. That team is three islands competing as three.

It's between Joe and Chris, nobody liked Carrie's dish at all, which is a shame. Joe edges ahead by half a point and the White Team is in the bottom as we were worried.

The Bears are all happy and drinking beers loudly in the back, which Tanya takes offense to. She calls them out for monopolizing the conversation when they win and when they lose and she's not wrong, but they weren't actually talking at all just then. They were sitting there looking happy and now confused. She asks them to have some empathy.

Carrie and others have also expressed irritation at the Bears this episode, Tanya is just the only one who said it to their faces.

The Blue Team takes the win, course, they were so N'Sync, just like a great boy band! Joe Sasto III takes the overall win.

Now we're in the bottom with the White Team and it's ugly. Chris takes his critique openly, as does Tanya, with a bit of a bite at the end but it's Claudette who does the age-old reality-show throwing Tanya under the bus. It always happens on reality shows but Tanya is not playing. She will not explain "her side" of the story and she will not take Gail Simmons asking her if she was upset for not cooking her dish correctly or for not having help. That was not the problem and she doesn't need your projection, Gail.

It's interesting that Joseph is over in the corner talking to Adrienne about how that was exactly Claudette's attitude when she was in the bottom before and I may have to roll that tape again.

It's so so uncomfortable to watch, everybody is cringing and nobody knows where to look but you know what? Good for you, Tanya, fck that thing where everyone pretends there is just one narrative and they're going to explain it to you and you're going to go along because nobody likes conflict or calling out bullshit. AND where you discuss your animus whenever somebody decides they need to hear it, fck that in the ear.

I have no idea why Claudette chose to single out Tanya and her "under the breath" comment, but she absolutely was alone during plating, which affected her dish and that has to be considered.

The judges start to discuss, Chris isn't going anywhere, of course, but the bs between the team members has actually affected how they view the dishes. That is not cool. People did not like Claudette's dish, not just because of the lack of acid, but the texture as well. They preferred Tanya's, but now they have to "consider." Jaysus wept. I like both of their food, but I will be upset if Tanya is sent home over not knowing a temperature and a personality conflict.

Tanya continues defending herself in the back, which drives some more wedges between her and the gang. Watching Carrie bug her eyes out and make faces at everyone else while Tanya said "we don't experience the world the same way, Carrie. Wake up. Get woke" made me angry. I get that last part was rude, but so was telling someone how they should feel about something. And so is making faces like a five year old.

And it's Tanya sent home this week, right after she won last week. Her knife cuts were not precise and she was not a good team member. She hugs everyone, except maybe Claudette and we're out. I am disappoint because once again: Tanya's dish was much better. Until next time!