Wow, here we are, a few short months after I started Traces, finally about to find out what happened to our long gone Marie Monroe, or Emma Hedges' Mum or even The Body In The MOOC, as we like to call her here. It's going to be confusing, recapping two shows back to back starring Martin Compston, but I'm going to do my best! Rolling this last installment (so far) of our procedural thriller from Val McDermid and writer Amelia Bullmore.

So I mentioned Emma Hedges (Molly Windsor) above, she's been our catalyst this series. Whether she's making bad choices or asking people uncomfortable questions, she's been the driver of this story and so we'll open and probably close with her.

She's just left brand-new much older boyfriend Daniel (Martin Compston of Line of Duty and more recently in The Nest!) because it's entirely probable his dad Phil MacAfee (Vincent Regan) may have murdered her mum Marie Monroe (Carly Anderson) 17 years previous. How Emma and Daniel met  reveals a hallmark of Val McDermid plots: incredibly and intricately linked ideas all connected. I know this series was not written by Val McDermid and instead was penned by Amelia Bullmore (of Happy Valley! and Gentleman Jack!) but it bears her signature.

Long story short: Emma took drugs while partying and blacked out, losing her purse and met Daniel while trying to retrieve it at the nightblub the following morning. They moved in together 24 hours later, which was not enough time for them to realise that she worked at the lab investigating the construction he completed at another nightclub. Then Emma met Daniel's dad and decided almost immediately that he killed her mum.

Emma wakes up resolute, but Daniel is morose and heads to the university to see her. He doesn't know she's been let go of her lab job for now while it helps the police investigate her mum's death.

Receptionist Janine Muir (Andrea Hart) fetches Professor Sarah Gordon (Laura Fraser) to explain that Emma's not there, they share no information but are both charmed by his manner.

Detective Neil McKinven (Michael Nardone) gives a press conference on re-opening the investigation as Sarah and lab helper Louise Chiu Jones (Anna Leong Brophy from Last Tango in Halifax series 5!) discuss the exciting developments in the drugs cases they've been investigating. The police are ready to do a raid!

Daniel headed home to his mum's house to look for information about the nightclub he built that burnt down, his mum Aileen (Stella Gonet) would rather talk about Daniel's dad Phil and where he was the night Marie Monroe was murdered. It seems Phil was putting it about with Marie's best friend Izzy Alessi (Laurie Brett) who lied and said Phil was with Aileen that night. But he wasn't, so where was he?

Aileen finds an invoice from Secrets nightclub before it was a nightclub, it brings Daniel's head up. He gathers all the paperwork and takes it home. He finds something exciting about the doors...

Daniel brings the paperwork of doom to his dad showing they did buy and install substandard materials, Phil is all icy steel resolve. He's not going down for this, he'll use his only son as a liferaft before he does. In the meantime, he blames everything on Shuggie Brook, the manager who killed himself after setting the nightclub on fire and accidentally murdering his niece and her lover.

Daniel's not done, he hesitates but brings up his mum's allegations that Phil was cheating on her, even while she was in the hospital with cancer.

Phil is not taking this dressing down from his son, he can "get to F***" which is an awesomely nonsensical phrase I must use immediately.

Daniel thinks this is the same issue as the work problem, his dad is just used to getting away with it. Phil tears his son into tiny little pieces.

Meanwhile, in a completely unrelated plotline (THERE ARE NO UNRELATED PLOTLINES), Professor Sarah and lab assistant Louise survey the illegal drug lab set up the police have raided. Awwww, Emma would have loved to see all that!

Pia and Kathy are finding bones in their 17-year-old dig site, but that's not all! Look at this perfectly preserved bootprint!

They'll be compared to the shoes sizes of all the men in Marie's life at the time of death, now back to the lab to sift through each and every layer of soil separately. Pia finds the hyoid bone; now they know cause of death!

(I don't know exactly what that small, notched bone signifies but they were very excited and I didn't want to rain on their parade)

Emma watches the excavation of her mum's body at her grave, she gets a call from a very unexpected person: Skye Alessi (Jamie Marie Leary) who held a knife on her the last time they saw each other. Skye is Izzy's daughter and was Emma's best friend when they were little, so the whole Threatening With A Knife bit really took Emma by surprise. Skye was trying to look out for her mum, though, whose currently in the hospital dying of lung cancer. That didn't stop Phil MacAfee from threatening her, mind.

ANYWAY, Skye is calling because her mum Izzy wants to make things right before she dies. (Maybe call the police, Izzy?) But Izzy doesn't even know that married Phil was stepping out on her, so I don't know how much value her information has anyway. She doesn't even talk about the fact that she knew Marie was dismembered, which only the killer or their confidant could have known.

This is feeling like a giant, coughy waste of time until she spits out: "Phil MacAfee knew who did it."

Are we back to alleged rapist Vincent Keir (Ian Pirier)? Phil specifically referenced the dismemberment when threatening moochy Izzy, saying he "knew the guy who did it" etc. That seems like a too-clunky game of Asking For A Friend, so I have to assume he did actually mean someone else.

Phil was very much in charge of their gang, after Marie went missing he told them what to do. They had to stop hanging out entirely and get rid of their extra "Naughty" phones that he'd gotten for them. Izzy melted hers, but Emma remembers seeing one at her dad's place, so that's where she runs.

Her dad Drew Cubbin (John Gordon Sinclair) doesn't want to admit he still has one, but Emma finds it after a short tussle. She talks him into bringing it to Detective Neil and his partner Trina (Morayo Akandé).

Drew doesn't have many answers for the police, but he kept the phone just in case. An uncomfortable question from Neil next; what was the trick Drew had to bring Marie to climax? Nothing rough, and honestly, it feels like such an intrusion that I'm not going to transcribe his answer but the main takeaway is this: he loved his ex-wife very much.

Emma makes the unwise choice to follow Phil MacAfee through Dundee's alleys then approaching him directly in a busy restaurant.

People start to pay attention when she asks if he killed her mum, she leaves shortly after.

Daniel explains his new legal strategy to his solicitor (Janey Godley), sharing with her what he didn't show to his dad. He has evidence that his dad faked invoices for the code-rated materials, this shows clear Intent to Deceive. Daniel will have to testify against him.

It's Human Puzzle Piece Time, with Marie Monroe's exhumed bones to be completed by the ones found under where she was first buried. They can tell how she was dismembered, and the hyoid bone from earlier shows us that she was killed by strangulation.

Professor Kathy delves slightly into the psychological aspects of the murder, I think it's commonplace for people to not give too much thought to the physical apparatus of murder and disposing of a body. But to strangle someone to death takes close to five minutes, then the horror of cutting them up and sawing them apart, it's incomprehensible.

Marie is complete once more. 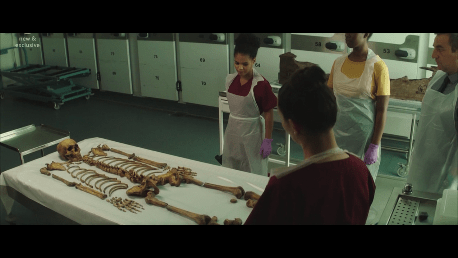 Emma is standing on a windy hill (?) when she gets a call from her former boss Sarah, they meet in a pub so Sarah can pass along the results of Emma's previous lab work.

The police and scientists meet to review the case of Marie's murder, they haven't advanced much, given what information they've literally dug up. They've got three suspects with the same size bootprints and not a bit of DNA to connect anyone to anything. The higher-ups are not very happy with Neil's optimistic press conference implying that they'd be arresting someone at the end of the week.

Emma and Daniel meet. He wants to ask what she thinks his father has done but she's worried they can't be anything if she tells him. They're nothing right now, may as well go for it, Emma! He gives her the missing information that Phil was NOT with his wife at the hospital the night of Marie's murder.

Neil and Sarah are at the pub commiserating over the stalled case when Daniel calls to give it a shot in the arm. One of the invoices he found was for cement and bollards back two days after the Tall Ships Festival the night Marie was killed.

The cement bollards are dug up forthwith, revealing...boots! Phil, you're in so much troublllleeeeeee....He's arrested, protesting that they have the wrong guy.

Neil and Trina interview Phil, whose only contribution is "no comment", even when Trina shows him all the retrieved data from Drew's Naughty Phone and his DNA match with semen found on a bed Marie was known to use for assignations.

The boots found under the bollard had Marie's blood on them and Phil's DNA inside them. That's...pretty damning.

Phil isn't talking but his memories flashing back fill in the blanks for us. He picked her up by coincidence, then reacted with violence to Marie's tipsy remonstrations with him about how he treated Izzy.

That's not really a motive, is it? I know crimes are complicated, that just seems very thin. Did they have previous animus?

Neil calls Emma to tell her the news, she puts it on speakerphone so Daniel can hear about his dad at the same time.

Daniel cries and Emma comforts him, keeping a smile to herself. She has justice for her mum.

The team meets in the pub after, there is definitely something between Neil and our Sarah.

Emma absorbs everything she has learned, letting go of her mother in memory with a funeral re-interring her bones. Everyone but Daniel is there, he thought it would be uncomfortable for everyone else. He's leaving Dundee for good. Ah but he does show up, Emma is so happy to see him! They hug and we're oot for good on the first series of Traces.

What did you think? I really liked the intricate plotting, the humour interwoven and I can't resist a good procedural. Something about watching people sift dirt soothes my soul. I haven't heard anything about a second series yet, but I will keep my fingers crossed! I'd like to see more of the forensic team with Sarah Gordon and Kathy Torrence. Until next time, cheers! I'm off to recap something with zero dead people or brutal murders.