And we're back asail with our intrepid crew on Below Deck Sailing Yacht in the middle of a charter with our favourite type of guests: ultra high maintenance! A green deckhand, a gossipy chief engineer and a libidinous chief steward try to keep up, but will they? Rolling into BDSY S1:E09 Parker's Big Adventure after the break!

So, we're on sailing yacht Parsifal III with Primary Charter Guests Yana and Arthur Greenstein, the former's main goal is to stay skinny.

I'm not going to tell anyone what to do with their bodies, everyone can come to their own conclusions about what works for them on their own. However, if you pay to charter a sailing yacht with a fancy chef aboard and you don't eat any of that food: you're a moron. I did see Primary Yana eating shrimp!

Okay! Back to where we are! We're on the beach with second steward Madison Stalker and deckhand Ciara Duggan, they were supposed to be holding and setting up the beach for a picnic later. Well, they held it! And did nothing besides visit, which caught them flat-footed when the guests wanted to come over and lie out.

The beach was picked by green deckhand Parker McCown who didn't tell anyone they needed shoes on this surface that is mostly broken rocks. The guests bailed almost immediately, Madison and Ciara scrambled to get SOMETHING ready for supper and chief steward Jenna MacGillivray is not.impressed.

It looks so much like a kids' room, seconds after they hear their mom's footsteps coming down the hallway.

Chef Adam Glick's workstation has been set up right by the water, how does that make sense to anyone? The main table is really far up, no umbrellas have been placed, it's just...bad.

Madison didn't bring everything on Jenna's list, and is not wearing a bra. How did Jenna even know that?

The guests dress for dinner as the crew scrambles to set everything up properly. It doesn't take long with everyone helping, I can't be the only one rolling my eyes at Madison screaming about walking on the rocks. Also: why didn't anyone bring over her shoes, she asked for some on the radio, right? I know she told Jenna to wear shoes, even though she isn't wearing them when she crawls into Adam's lap for a snuggle.

Third steward Georgia Grobler serves drinks to the guests back on the ship, I don't know if "drink responsibly?" is what they're aiming for, but I appreciate the thought!

Madison, Ciara and Parker head back to the yacht, when first mate Paget Berry asks what happened on the beach, Ciara just says everyone was bitching about everything. Paget suggests they "solutionize" (not a word) with the interior staff to solve problems while Madison unloads her frustration on Georgia.

The guests are brought to the beach just in time for a glorious sunset, but they're maybe not happy about the level of service they're not getting.

Madison cleans guest cabins while Georgia sets up the surprise birthday party for Primary Yana, that's...backwards. Usually the second stew would be doing things like a party setup and the third stew is always stuck cleaning and in laundry. I think Jenna's preferences for quiet Georgia over loud Madison are showing.

Captain Glenn Shephard likes what Georgia has done with the table, she says "I like doing second stew sh*t" so yeah, I was right.

The guests come back after supper on the beach, they love the surprise party decoration and the two cakes for Primary Yana.

Madison is not doing well. She's tired and frustrated and not getting any positive feedback or break. She stays up until 3:00am cleaning and writes a note for her crush Parker before bed. He reads it first thing before anyone else (thank the gods), he doesn't know how he feels about her. He had a serious relationship and difficult breakup a year before, he just doesn't know.

It's 7:45 in Syvota and we're all up and at 'em! Adam has breakfast rolling and I love that the guests are up and ready right away. There's this one guest...Carla...who does not like the family style platter serving the food comes out on. She asks Jenna to make her a plate, because otherwise it would be...difficult.

She's also the one who wanted to be served at the beach picnic.

Jenna is understanding. The guest paid tens of thousands of dollars for this vacation, as she mentioned about the beach picnic, so she deftly makes up a plate without complaining. Hahahaha, just kidding. She makes up a plate sullenly while screaming at us in Interview that the guest should get OFF HER ASS; does she have to chew it up and baby bird feed it?

Inconsistency, thy name is JENNA.

Parker shows Jenna and Paget the note from Madison, aww man, why would you do that??? Jenna and Paget are on your back constantly, they're not your friends! They make fun of you to your face AND behind your back! Why expose Madison and yourself to ridicule? You can't be that obtuse.

Parker tells us in Interview that Madison is his best friend on the boat, his "Lil' Kim", he would go in a mosh pit with her!

Madison gets up in time to help clear, the guests kind of having nothing planned for the whole day. They did TWO things the very first day, that's nuts, so now the crew wants to know what they're interested in doing. Parker is the most junior person on the deck crew, it should be Paget approaching the guests to ask, but instead it's Parker after he sees that second-in-command Ciara is hesitating.

They vaguely reference snorkeling, so he offers to find a good place, even checking underwater. Captain Glenn and I: really? He cautions Parker not to be too long and THIS is why he should be letting the more senior crew do these interfaces.

Jenna decides that Madison writing Parker a note and pouring him some granola is what kept Madison up until 3 am, she beaks on and on about professionalism while Adam does this:

Jenna. Are you kidding. You're so ridiculous that I'm not even going to point out any more inconsistencies in what you do because it's clearly wasted time. You have decided you don't like Madison and will use anything against her, including the very same things you yourself are doing. You are a terrible manager.

The guests wait and wait while Parker scopes out underwater, chatting with a local who knows where to go. Then the tender overheats and he has to sit and wait. Chief engineer and gossip Byron Hissel talks him though fixing the boat then he finally makes it back to take them out.

The guests are already talking about asking for a refund for some of their time, but they're the ones that didn't plan anything. They maybe just didn't realise they'd put themselves in the hands of someone who knows zero, there is that.

LOOKIT WHERE THEY ARE??

Whoops, nobody has done the guest laundry that was requested, did the chief steward not tell anyone?

14 knots and 8 degrees of heel! Primary Arthur gets to drive the yacht, the guests love this part, even with the dishes flying everywhere.

The sails are put away (booo) and the guests dress for dinner as Parker gets a text from his ex-girlfriend Kaiti. She wants to swim with him in the ocean. Parker is very much open to getting back together with the "love of my life."

I immediately felt bad for Madison, awww, not this one I guess, girl.

The guests are doing yet another photo shoot for Primary Arthur's "young wife" Primary Yana (not a creepy comment at all), Madison didn't interrupt which makes her chief stew mad.

They are LOVING Adam's food, one guest comments that Primary Yana has eaten more on this charter than she has in the past month and that makes me sad.

Georgia and Parker will be singing during supper, Georgia is super happy to accommodate. She loves the chance to practice and play.

Madison gets called to the cabins to be raked over the coals by her chief stew, but it was Georgia who was supposed to? The chief stew comes along to ask what's shaking, but Madison and Georgia are always good.

Georgia's singing goes over so well! Captain Glenn and the guests are blown away!

The chief stew warns Madison to go to bed 30 minutes after the guests go to bed then moves into the crew mess with Adam to make out fully in front of everyone.

Remember Madison was supposed to go to bed 30 minutes after the guests? They crashed at 12:30, three hours later Madison's still cleaning and doing laundry. Is there any way possible that this wasn't to stay up and see Parker when he gets up at 4 for anchor watch? Nope.

They sit out on deck and chat, he's texting Kaiti at the same time. Awww, Madison.

It's the morning and the last day of the charter, so we're in for a complicated docking. They have zero extra room. 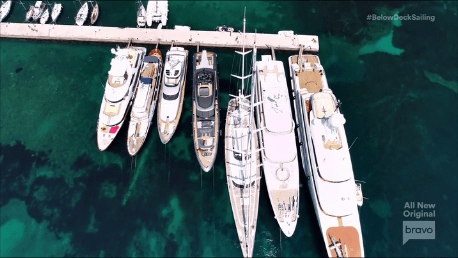 The people on the nearby boats are out there watching too, that was triccckkkkky. Good job Captain Glenn and crew!

Time for the guests departure, they give a lovely speech and a fat envelope...I'm going to guess....$17k based on...nothing. They liked the music, didn't like the sitting around but had a nice beach picnic and party, so. $17k, final answer!

Tip Meeting already, yay! WOOOOOOOO GUESS WHAT IT WAS?? $17,000 USD baby!! Wooooooooooooo!! I was right! And they get $1880 each which is almost as good as being right, wooooooo!

Adam bitches about the beach picnic setup and Madison tries to defend herself but he's rude because he's Adam and honestly: he's right. Just doesn't need to be rude about it.

Tomorrow is a day off, yay, Captain Glenn is taking the crew for a day off to a beach bar. Champagne time, Captain Glenn reminds them all to make eye contact when "cheers"-ing, otherwise it's 7 years of bad sex!

That legit made me laugh out loud. Everyone wants to know why Paget was leering so much; he doesn't need any more bad sex! Ciara laughs along, wait, WHAT? Georgia watches from across the room, deep in thought.

The chief stew goes to Captain Glenn to complain about Madison, he unhelpfully points out how Madison works through her breaks to keep helping and that's NOT what point the chief stew is trying to make. The chief stew even brings up Madison's crush on Parker as the reason Madison is staying up late cleaning, was that really necessary? We end with Captain Glenn asking if Madison needs to be fired, dun dun DUNNNNN.

Whatever, chief stew. Until next week. Cheers!