Hiya and welcome back to Below Deck Sailing Yacht, the most fun on our TV since Below Deck, lo one month ago. We're halfway through our first charter and have already lost one third of the guests, it's going great! Rolling into my recap of BDSY S2:E02 Nookie Mistake after the break!

We left off with green deckhand Jean-Luc Cerza Lanaux searching for lost guests Gregory Richmond and Alex Fernandez, who went off on paddleboards to go snorkeling.

1) How could you lose guests?? Jean-Luc is pretty green, and I get how it might be difficult to sort through the metric tonne of instructions to figure out what's important but. HOW COULD YOU LOSE ONE THIRD OF YOUR CHARTER?

2) The guests went snorkeling, yeah? That's mostly underwater, so shouting at them is probably not as productive as you think. Maybe look near the coats for snorkels, you muppet.

3) I totally get that it's more fun to be flirted with by the attractive guests on board, but you're there to work, right, Jean-Luc? Like for money?

After 90 minutes, the guests are recovered on some rocks in the middle of nowhere in Croatia. That's going to show up on someone's dating profile: 100%. They went hiking.

Inside, chief steward Daisy Kelliher is organizing for lunch, second stew Dani Soares is teaching third stew Alli Dore about where to stow stuff on the boat. I am having some weird feelings about Dani training Alli so thoroughly, we know from the previews last week that she's going to be training Alli on...other skills later in the season. Involving Dani's bathing suit areas. So yeah!

But I think she's just really secure with her food. By that I mean she takes absolutely no criticism or outside direction, which can be a problem.

First Mate Gary King flirts with Alli in the laundry, but he kind of flirts with everyone. She's a full six to twelve inches taller than him, maybe it's not just girls that like to climb friendly mountains (as says Jean-Luc).

I'll mention Chief Engineer Colin Macrae (not capitalizing that R is really bothering me), but he's not doing anything other than smiling and looking adorable.

Everyone gets dressed up for the 80s night, but the young stews have got it all wrong, as expected. Primary Charter Guests Nikki Linn and Rusty Neidwick asked for an 80s hair metal party, so think Def Leopard, Poison, that kind of thing. The crew have just thrown a bunch of random unrelated 80s gear together and it makes no sense! You can't have Duran Duran face paint next to an Ace Frehley eye star mixed in with poodle skirts THAT MAKES NO SENSE. Half of that is new wave, not glam metal!

I wasn't sure which one was Greg but then.

I don't even think he bought an outfit for the party, I think that's all in his regular closet rotation.

Alli is still pretty slow at turndown service so Dani helps her while the guests have a pre-dinner drinkie. Once supper starts, Daisy pops down to see how she's doing to find Alli still slowly gathering things. I agree with Daisy that Alli needs to pick up the pace but I cannea stand a manager standing around telling you you're not getting things done fast enough, help her! Do something while you're standing there talking about how much has to be done! It takes Alli almost two hours to do an one hour job and she gets busted with the hallway a mess when a couple of the guests want to come down and go to bed. 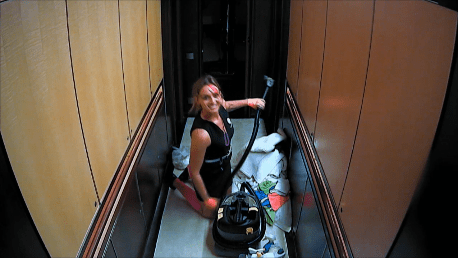 It's totally weird that they want to go to bed at 10:00 pm, though, that's not really an 80s glam-metal band bedtime, is it?

Deckhand Sydney Zaruba is also digging Gary's flavour, I just...don't get it. She calls herself and Gary sailors instead of yachties and that suddenly makes all the sense.

Colin's also a sailor AND he's the only one not single, I think? He has an absolutely gorgeous girlfriend, I could not like his chill vibe more.

So one of the things Dani taught Alli earlier was to stow cushion covers in the bilge during the day. However, nobody told the deckhand working by himself at 11 pm where to find the covers he's supposed to put back on. He looks everywhere (but the bilge, but really, why would he?) and finally has to ask his boss Gary where they could be. Gary is not a great boss for someone unsure of themselves, he is visibly frustrated and dismissive.

Sydney overhears what's going on and pops up to help look for the covers; not even Dani remembers exactly what's where, so things are going great! They are finally recovered in the bilge and two thirds of the deck crew can go back to bed.

I get that the tough stuff happens during the day and night shifts are mostly maintenance, but leaving the new guy alone in the middle of the night without any kind of support is maybe not the best strategy.

Chef Natasha tells us and Colin some about her childhood, she grew up in a toxic environment, perhaps that's why her confidence is bulletproof. She came out the other side of an abusive marriage too, lots going on there.

Minor drama during breakfast, Natasha did a Mediterranean breakfast with pita breads, but not nearly enough. She says she made 20 but there's no way. Maybe a third of that. Daisy questions that, but again: Natasha will not be questioned OR criticized so just comes straight back at her. 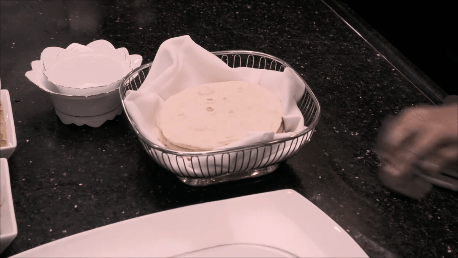 It is very, very quiet in the galley between Daisy and Natasha now.

Sydney finds the guests clutching towels up on deck, would they like to try some water sports? Nope, they're going to dive in naked and so they do, white bums everywhere!

Alli spends ten minutes making a spicy Bloody Mary for guest Alex, then drops it on the stairs without anyone ever getting a chance to taste it's awesomeness.

The charter is almost over, so it's time to stow for sailing. This charter looooves sailing, so Captain Glenn Shephard is determined to find them something fun for their sendoff. It's a beautiful sail.

6 degrees of heel! It's very emotional, watching that, I've always loved the sea but never had any interest in large boats until I saw this beautiful Parsifal III.

It's time to dock, poor Jean-Luc is tasked with throwing the ropes and fails miserably as the entire crew, all the charter guests and the surrounding people watch.

He finally gets it and it's time to say goodbye to our group of sailors. It's interesting that this may be the first time they've met Natasha; I remember Rachel from Below Deck introduced almost every meal.

Primary Nikki gives the speech, this trip honoured her dad and she felt like he was there today. Everyone is now family and if you could show us the tip envelope, we could start guessing and that would be great. Thanks!!

Okay, I'm a jerk, everyone else is crying and we don't even see an envelope, fine. Oh wait, Rusty handed it over, and it's a biggun, woooo! I shall guess $18,000 Croatian Dinars.

Everyone works hard on cleaning the boat after their departure, Gary takes the time to measure his bed and Jean-Luc's, he may switch beds as his is a solid five inches longer than Jean-Luc's. Neither one is his length, it must be said, but Gary's is closer. Hahahaha when Gary asks Jean-Luc if he wants to swich, JL is 100% hell no. He doesn't want to sleep in the same room as the captain!

Natasha gets kudos for her guest-loved food, she ups the stakes by immediately demanding that the crew echo the praise, hm. That's not really ego, that's kind of like insecurity masquerading as aggressive confidence. As is being crazy defensive.

Captain Glenn says they can't go to town (COVID?) tonight, but he's giving them run of the boat with a catered meal and all the booze they can drink wooooooo. No way bad choices will be made on camera for our viewing pleasure!

Everyone gets dressed up fancy and puts on makeup, I would 100% never, ever do that to hang out with people I worked with all day and night. NEVER.

Okay, the guys aren't either, Gary is one shorty pile of grease with a sweaty ring and his hat on backwards. By catering, I mean that Captain Glenn ordered florentine-style pizza, boooo. That's not catering!

Even though Gary is a pile of grease replete with sweat ring and inability to wear a hat properly, he is doing very, very well with the female crew members on board. Sydney watches and listens carefully while Gary flirts with Dani and mostly Alli, we see her making a move shortly.

Time to get in the hot tub for the first time, woo! Alli is worried about her (absolutely awesome) body, so straps on a pair of pants over her bikini bottoms. Daisy is in a very strategically cut swimsuit, she figures she'll be comfortable with her body when she's 65.

The guys have half a dozen asscheeks coming at them from every direction at any time, even Natasha gets in on the "fun". Jean-Luc is 'white-girl wasted' says Colin, "amateur."

He's just super chill! And determined to not share with the Captain, hahah, c'mon, Captain Glenn is Canadian, he couldn't be more relaxed!

Gary, Alli and Sydney get into shots; Sydney takes this opportunity to make her move, kissing Alli. She knows Gary is into Alli, so why not one big fun party?

Alli hears Gary saying "I have better sex when I'm drunk" and drags him over by his neckchain, then there's some cuddling but he tells her to behave. Sydney tells her to go to bed hahaha. Suddenly we're talking about sex toys and you guys: you GUYS.

Natasha hasn't had sex in 5 years, she can't find the intelligence in this generation of men. I don't know if it's a generational thing or that somehow we've depersonalized meeting people while simultaneously weaponizing strangers.

Sydney drags Gary off into the corner for an under-towel cuddle (HOW HUGE ARE THESE TOWELS??? I WANT ALL THESE TOWELS) while everyone watches. He's technically her boss and they work together every single day, this is a terrible, terrible idea.

It's time to call it a night, Sydney and Gary are among the last to leave the deck but Jean-Luc is already downstairs puking up the entire bottle of Jack Daniels that he drank this night.

Gary is sharing with Captain Glenn and he's good with that, just maybe not...tonight. Everyone is ready for bed, though, after Gary watches Daisy, Alli and Sydney dance together covered by communal towels he leaves, to be followed by Sydney. This is such a bad idea! Even Colin tells him that! Sydney works for Gary, but she is determined.

Sydney brings Gary to a guest cabin, he tells her this is just a one night stand, she knows that, right? She says yeah, then locks the door after asking for confirmation that she's the most attractive woman on board.

We're out! Until next time, everyone, cheers!