Hi guys and welcome back to our yachties on Below Deck Mediterranean! We've still got Ken and Amber Novotny aboard, I don't have high hopes re: tip, THANKS ADAM, but you never know! Throw on some long, tacky t-shirts and dance, yachties, dance! Rolling Mo' Onions, Mo' Problems after the break.

So we're back in the galley with Chef Adam Glick blaming chief stew Hannah Ferrier for the delay of the ferry to the Krka Waterfalls, she can't control boats, Adam! She can't! It is hella hot and maybe the food should have been brought back aship as soon as they heard that, but second stew Christine "Bugsy" Drake didn't suggest it either, no matter how much you think she does everything perfectly.

She totally does: she's a great stew, much more organized and empathetic than Hannah, but Hannah has her qualities. Let me get back to you on those. Oh I remember: she has three stripes and Bugsy only has two.

Hannah is FURIOUS. Nobody speaks to her like that, EVAH. EVAH *extra Australian accent*, she's gonna call him MATE any second. Ask Chef Ben from last season.

Bugsy wants zero part of this fight, exactly none parts of Adam vs. Hannah. 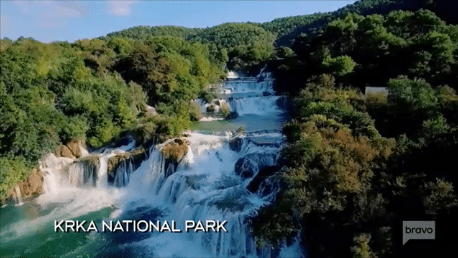 Third stew Lauren Cohen, Bugsy and the crew set up while the guests try to talk each other into a group baptizing. Does...deckhand Bobby Giancola have a wet arse? I saw a big old wet spot when he was bent over. ANYWAY

Bosun Wes Walton and Hannah go provisioning; i.e. getting more booze for the US Binge Drinking Team, aka Ken Novotny and Gang. At least they don't sleep in, they get right back up and at it again, atta Okies!

Adam is carefully watching the guests dig into his snacks; you can tell he's the chef on a huge, expensive yacht because he's wearing a dirty, sweat-soaked grey t-shirt with his hat on backwards and not chef's whites. I hope he didn't put onions in the hummus (KENNY HATES ONIONS) but he still thinks he has to teach Kenny a lesson. Sigh. Kenny the Primary Charter Guest is paying you 5 figures at LEAST to enjoy a weekend however he wants: he doesn't want your lessons, Adam. He wants food free of Allium. Kenny also thinks couscous is ground up corn, so I'm not saying he doesn't NEED lessons.

Adam grabs deckhand Malia White to go for a swim at the waterfalls; I think I actually heard a record scratch 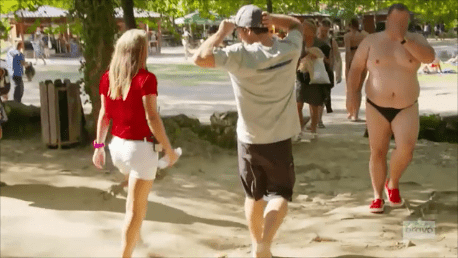 Dude. I don't know who you are, but I fucking LOVE your confidence!! Get it!

Adam and Malia chat and take selfies; he sneaks a kiss behind the trees, which makes Malia bolt to the other side of the path and start walking ahead of him. I don't think she's into any of these guys, truly, she still feels like she's gotta be fair to Wes.

Everyone comes back to the boat; Bugsy serves drinks while Hannah...checks her phone? She just had the afternoon off! I need to slow my roll; I am not a Hannah-H8ter, just appreciate Bugsy's professionalism. The guests have been doing shots all afternoon; now they're into espresso martinis and the hot tub. IN THE DAYLIGHT. MINE EYES

Adam is grating onions into the food; I totally recommended that last episode because that's what I used to do when I had an onion-hater in the hizzay, but you had food sent back TWICE already, Adam. What if Ken notices? That will pass on to the tip and then all of Bugsy's hard work is for nada, you arsehole.

Hannah explains the plans for tomorrow: they'll be doing an obstacle course competing against the crew. If saccharine and condescension had a baby:

Although Amber could just be tired and half cut; they've been drinking in the sun all day. I feel like I know these people! You wait, Dean Slover will show up next and I'll be listing his preference sheet for him.

THE SOUP HAS BEEN SERVED

We're all holding our breath, waiting to see if Primary Kenny will be able to taste the grated onions...

He totally tastes the onions; Primary Kenny is sad.

Deckhand Max Hagley has decided to get to the bottom of this business with Malia dating his coworkers: did she have a good walk with Adam today? And how does she feel about Wes then? And Bobby? Wes and Bobby are pals, but Bobby only because he already did some messing with Lauren. Huh says Max and I

Now Malia and Wes are on a walk, in the dark. With kittens. Wut?

The guests enjoy the rest of the meal (hate lamb); the one walking around bottomless last episode shit his pants earlier in the year and I just. They were eating, Mrs. Bottomless. Nobody needs to know that.

Max just about RUNS to tell Bobby that he still has a chance in the Malia Cup; if only Lauren hadn't screwed it up by sleeping (hopefully banging, not snoozing!) Other Chef Ben Robinson after he brought two extra dates on their date. Did everyone get all that? I can go through it again, but I'll need a laser pointer and a gas mask.

One of the guests Grandpa Greg, has passed out on the toilet; Hannah would like to judge but she's no hypocrite. Toilet bum rings for all!

I have never ever wanted to go to Croatia but this SCENERY!

Bobby takes Malia aside for a chat, to sum up: wouldja be into me, Malia, wouldja? Huh? *big eyes*

Malia grudgingly admits she would maybe go on something like a date as long as it wasn't a date and they were just friends. Bobby lights up like a Christmas tree.

Ohhh the guests are unimpressed with breakfast. They're unimpressed with the food in general, but they're polite so they say maybe their standards are too high. I've been to Oklahoma City, it was my very favourite part of an extended trip to the US I took while pregnant: everyone was very polite. It's just a shame none of their turn signals worked.

Captain Sandy Yawn has been largely absent this episode but when they're anchoring for the obstacle course, she says "you know this is probably normal on boats, this anchoring thing" and I'm STILL laughing.

Time for the obstacle course! If the crew loses, Max has to take his pants off!

They have a really fun time; the guests sabotaged and cheat and carry on, of course, Lauren is disgusted. HAHAHAHAHA. dude. You're the help; you should have fallen off that board on purpose! That is literally why they pay you the big bucks.

Everyone does awesome dives off the boat after! Yeah Malia's looked better than Primary Kenny's dive, but he's twice her size and age, that was fantastic!

Captain Sandy is the only crew member not participating, so she makes shots for the guests, guess who rats out Adam about the onions? No, guess???!!

Hannah and Adam enjoy some more terrible communication while the guests complain about onions to Bugsy. Then Captain Sandy makes her way down to the galley: what's this about onions?

Adam lies right to his captain's face. It was just the first night, because he didn't know; he couldn't read the preference sheet where he'd carefully drawn around the Primary's notation of "Anything without onions!"

The guests are STILL talking about it; Ken tells Hannah while the rest of the crew gossip about it and Amber says no way would the chef do that again after he had two plates sent back the night before. No chef would do that.

Hannah asks Bugsy, who's the only one who saw The Evidence Of The Grated Onions, Bugsy suggests Hannah talk directly to Adam herself. And then runs.

Adam admits it to Hannah right away; he hates her, huh? Hannah cannot understand why he would undermine the tip and guest enjoyment of a returning charter guest.

The guests enjoy their last day and I hope Adam is similarly enjoying his last day too! Because Hannah went up and told the Captain that Adam lied to her face about the onions the second night, which he added because he thought it was funny. She also brings up the disrespect about Bugsy, Captain Sandy says she'll deal with it.

Hannah makes her way around the boat telling everyone what happened, so they don't blame her for what will probably be a shit tip; just kidding, she tells Lauren, who tells everyone else.

Guest leaving time! Wow, I have never seen a guest single out a crew member who didn't deliver before; somehow Adam smiles all the way through it, but he has to know he's in troubbbblllle when a guest recommends you be fired.

Huge tip envelope, tho! Woot, and it's $20,000, which is just what it looked like! Adam gets chewed out before the money is handed out; Captain Sandy even holds his tip portion back for a minute, he has the balls to hold out his hand for it.

Captain Sandy takes Adam aside and gives him one more chance, although that's really more of a Where Am I Going To Find A Chef in Croatia? problem. Call Ben Robinson, he helped out last season when old Beef Cheeks took the tender away.

Time for a crew night out, woo hoo! And it's Friday night, too! Malia looks just so pretty; she said that she didn't get any attention until college, maybe that's why she has a hard time turning down guys definitively. Hannah will not shut up about Bugsy, and Bugsy isn't even the one that said anything, that was Adam!

Adam offers his tip to everyone at dinner, but nobody takes it. As Wes says "Money can't fix being a dick." True story.

Hannah keeps it klassy by moving over to another table two feet away to bitch loudly about Bugsy to Lauren; Bugsy is right there! Right there! She can hear everything and again: she didn't do anything wrong.

Adam isn't having a good night either, he's watching Malia and Wes chat and decides he's had enough of that and this entire night even, so he's gone. Malia follows after she hears; she probably knows it has to do partially with her exercising free will and talking to his roommate and all. Now Wes is sad. He does shots while interviewing that he no longer wants to know Malia if she's into "bad guys." She can keep chasing the "bad guys" and one day she'll turn around and all that will be left is no "good guys" because they're taken. I bet they have the cancer you get from bitterness too, Wes. Honestly.

And we're out; looks like Hannah gets some action from a hawt charter guest, woo hoo! Yay Hannah!