Hi guys! I'm having issues accessing shows, so I thought I would roll on to another awesome Bravo show: Invite Only Cabo since I'm still behind. To sum up: Agu doesn't even like Emily like that and Kamani got hurt, let's find out if she's okay!

At the hospital Bianca Banks leads everyone in prayer for Kamani Alanna, who flew over the handlebars of her quad and has been gone a long time. Three hours later, she comes out in a neckbrace, she's not paralysed, yay! Thank you Jeebus!

Everyone is super helpful to Kamani, except Bianca who has to bring up that they weren't in a good place. Was that necessary? Kamani appreciates it, though, they bond.

Crisis over; what's Larry Sims doing for Bianca's birthday?! Jermane Britton figures Bianca's gonna want a car but Larry is thinking something sparklier! A ring! In fact, the ring that Bianca already saw and loved.

I love Malaku Quisada coz he's like DON'T DO IT: too many mixed messages and hell yeah there are. Larry protests: it's Bianca's birthstone!

He wants the ring to signify them being in each other's lives for the rest of their lives and um. LARRY.

Agu Ukaogo finds Kamani chilling by the pool; she milks allll the sympathy she can out of this fine fella. Then she compares her and Emily to bottles of wine and gurl: what did I tell you about comparing yourself to Emily? Plus if you were a corked bottle that would just mean any server anywhere would have your cork out in seconds flat while your flavours developed and that ain't right.

Bianca's bummed because she's missing her daughter's birthday, well. She SAYS she's bummed and her daughter cried but Bianca is...blank? I keep forgetting that these people have actual lives and maybe they don't wanna hold every single emotion up to us rude bastages to pick over anyway. Right??

Larry grabs Bianca to go out for drinks; they're not used to hanging around this many people and it's cramping their style. Bianca is planning to kick it solo so Larry can wish Bianca happy birthday first.

They have a weird date; WEIRD. All Larry does is slur "happy birthday" and "I love you" at Bianca; is he under the influence? She's got way more patience than me, I'da been gone after the first five minutes.

The boys are gossiping about Larry And The Ring Of Destiny; Agu can't believe Larry bought that ring! RIGHT AFTER BIANCA SAID SHE WANTED TO GET MARRIED.

They confront him as soon as he gets back; Agu lays it out straight

Oh but Larry has somebody else. Somebody on the West Coast and Malaku knows who it is, but he isn't saying. They're carefully using gender-neutral pronouns, I can't help but note. Larry kicks everyone out of his room and

For a guy who doesn't like drama, Larry seems steeped innit up to his eyeballs.

This other person is Cory and there is indeed a history with Larry that ended poorly, but the fellas aren't being very forthcoming. Throw me a bone, Agu!

Emily is LOADED; opening up booze with her teeth and ALSO wanting Agu to throw her a bone, but he is stone cold sober and hella uninterested. She gropes him a little and tries to lure him outside, where she passes out while he stays inside. Hard pass from Agu, sorry Emily.

The next morning, Larry is bright eyed and bushy-chinned, ready to celebrate Bianca's big day. Bianca interviews that she throws multi-day event parties for Larry on his birthday and he's never even acknowledged hers before, so she's excited at what this means.

He did NOTHING for you on your birthday before? And you throw him three-day parties? What's wrong with him? That ain't right. Neither is the speech Larry gives, all about how meaningful their relationship is and how now they'll be in each other's lives forever. And ever. Jermane can't even believe what he's hearing.

It's time for the birthday dinner; these are seriously beautiful people. Eating at the fanciest pizza joint in the world, honestly. KEEP YOUR NAILS ON EMILY.

The talk turns to having children; does Bianca want any more? Noooope but Larry maybe does, again: so glad they're discussing this super important couple stuff in front of everyone when they're not a couple and everyone with a penis at that table knows Larry's with someone else. AWESOME.

Larry's gotta go away for a couple of days to do some work (sell some hair gel?) so he takes Bianca aside to give her the Ring of Totally Not Destiny. Kamani says it for all of us

If I have to hear Larry say "bae! Babe!! Bae" one thousand times a minute again I might lose my mind.

Bianca says "in sickness and in health" back at the table; Emily choke-laughs and swallows her tongue while Larry looks confused and my hand hovers over the Mute button.

There's nothing left to do but play tennis. At night. Malaku makes me laugh

Larry flies out first thing in the morning, leaving Kamani and Jermane to hang out on the beach. They don't know each other well, but they speak the.same.language. Mostly about Agu and Emily and "serving up turkey neck" which I couldn't get Urban Dictionary to explain to my satisfaction.

I am finding I like Kamani the best; except when she's talking about herself in the almost third person. She's pretty cool, and much less hotheaded than she sometimes appears. And she's always ready first, even though she's working around a neckbrace. Respect.

The housemates decide to have Grilled Bianca for supper; has she felt confused at all by anything that's happened....how did she like it when the box came out? Etc et bloody cetra. She ducks and weaves fine until Larry sends Jermane a text: he's coming back the next day with a "friend." Bianca immediately assumes it's a woman, otherwise he woulda said homey and she's already mad. Jermane figures somebody's gonna get their weave pulled. 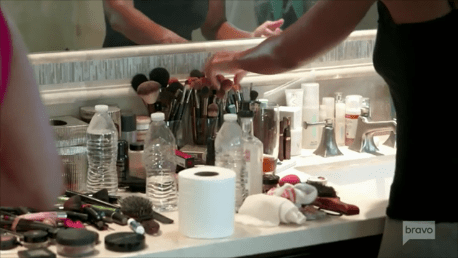 WHAT IS THE TOILET PAPER DOING THERE??

I have a major bro-code violation to report: the guys actually TELL Bianca what Larry said about there being someone else; you can't rat out your dude like that! But they're worried that Bianca is being led down the garden path and they want to be honest, because they're good people. I just don't know if that is how it's going to look from Larry's side of the fence. We're out just as Larry and his "friend" arrive.

So. I don't know, you guys! I like everyone but...Bianca is blank. Beautiful but I am getting zero personality and if I have to hear Larry and her Babe at each other for another full episode, Imma lose it. Agu is alllll over Kamani, so maybe that will make something; Malaku is hilarious and Jermane is all up innit, but this whole BLianca storyline is giving me a headache. Until next time, you guys!

Ps: I totally had an Agu makeout dream after watching, you too??