Hi everyone, I'm late! I'm late and I've been missing our gang of miscreants asea so I will waste no more time flibberty jibbeting. Onward with Below Deck Mediterranean S3:E08 Bizarre Love Triangle!

We're back in the galley with the Primary Charter Guest John Barker asking Where The Food At? while chef Adam Glick bangs his knife around and chief stew Hannah Ferrier tries to smooth things over.

For the record: the guests asked for supper at a particular time then showed up late, then demanded the supper immediately, not respecting Hannah's request for a 10 minute heads-up.

Adam blames it on Hannah of course, and even comes up to introduce and explain the meal since he knows Hannah won't do it justice.

Bosun Conrad Empson, lead hand João Franco and Captain Sandy Yawn eat supper in the crew mess, Conrad mostly chews on his liver while Captain Sandy tells J-WOWW she would totally hire him as her bosun. In front of her bosun.

Third stew Kasey Kohen has made a creepy creepy discovery in one of the guest cabins; plushie animal heads. There's a pig and a cheetah and a unicorn...even a monkey. She calls deckhand Jamie Jason in for an impromptu unicorn twerk session, that's a little personal, innit? Getting your face all up in someone's love puppet mask?

The guests love the meal then head to the jacuzzi to relax in their animal masks. Second stew Brooke Laughton grills Conrad about his relationship with Hannah: exactly what are his intentions towards the young lady??

Well, first off he'd like some time off camera with her, everything on ship is already so intense, throw in a camera crew capturing everything for posterity and you see how crazy that can get.

Kasey is up to serve the guests first thing in the morning, Adam even gives her some serving tips, awww. Deckhand Colin Macy-O'Toole stops by the laundry room to hit on Brooke in the lame/cutest way possible, he neeeeeeds a storyline, Bravo!

Jamie and Conrad drop anchor so that the guests can eat within view of beautiful Capri, oh wait, the guests getta eat on Capri! Wow. That view is amazing! 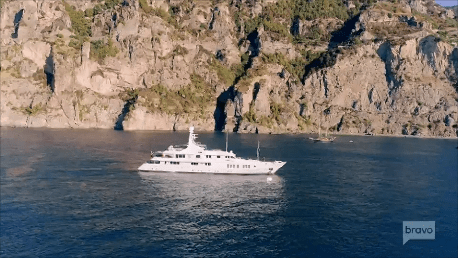 Hannah and Brooke chitchat about Hannah's 30th birthday, it's still awks coz Brooke likes the guy that is determined to battle her boss.

We're off to Capri! Everyone and all the gear is chair-lifted up the hill by guys that look like extras from Casino (still have nightmares) and then it's picnic time! 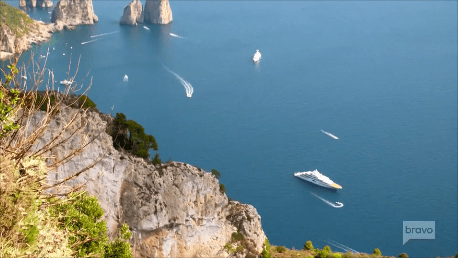 João and Captain Sandy stay back so he can launch all the toys by himself and she can take over presidency of the JFranco Fan Club.

He's so self-sufficient! He's all about the hard work and sets up everything all by himself. WITH NO ATTITUDE. So refreshing.

The guests are overwhelmed with the beauty of Capri, this is such a lovely change from the guests in the early seasons of OG Below Deck who just wanted to get schwasted and have someone else pack their luggage after.

João talks to Colin about his love life, he doesn't really want to date anyone but gets drunk and tries to snog everyone. Kasey and Brooke are the two current objects of his affection.

Awwww, Hannah and Conrad kiss and take selfies by the water, she really likes him! Dun dun DUN

The guests make it back from paradise through giant swells, Adam has a great meal planned but we don't know if the all the guests are gonna make it. There's puking coming from the cabins! And from Kasey's room, which makes sense.

I love this suit! It's like if Elvis Costello spent money. 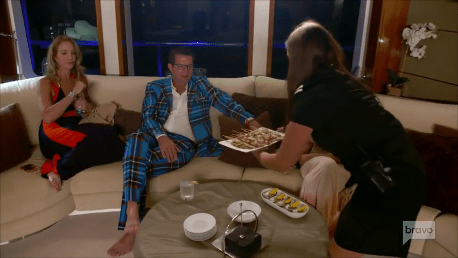 Captain Sandy decides to leave the Capri area and heads slowly for Naples where there is more protection from the wind.

The two sick guests make it up above deck, Damita Ortega-Bishop asks for chicken soup, which sends Adam screaming. He said NO CHANGIES!! It was in the meeting, Hannah! He grouchily throws something together, gaawwwdd, like it's his job and they're paying a hundred thousand dollars or something. He's not wrong however...

Captain Sandy busts Hannah and Conrad canoodling in the hallway, she's hangry and not in the mood for their bullshit.

Second course and the ship has reached its destination for the night, time to drop anchor! The poor Bishop couple just huddle near the railing, seasickness suuuucks.

We're getting a lot of shots of J-WOWW's chest in the crew cabins, aren't we?

Last day of the charter! Kasey is doing so much better with serving! Captain Sandy insisted that Conrad put out the slide at 7 am, even though he'll have to put it back at 10:30, the guest are impressed even if he isn't.

I completely understand her asking Conrad to do that, she doesn't need logic, she's the BOSS.

Let's sing, all together: she's not bossy, she's the BOSS!

All of Captain Sandy's criticism is having the usual effect on Conrad, he's starting to second-guess everything he does, leading to more eye rolling and pfft-ing.

Conrad complains to Hannah about it but is interrupted by Captain Sandy radioing him to come up and fix yet another mistake. Jaysus.

Time for guest departure, they were fun! And hardly any trouble, I hope they leave a good tip! It's a pretty small envelope, but maybe it's in large denominations. Wishing for big bills, y'all!

To his credit, Conrad takes Captain Sandy aside to ask where her change of attitude towards him has come from. She thinks he's spending too much time with Hannah, which Conrad immediately tells Hannah. She takes it well and understands that being professional is about managing your personal issues around your time on duty. JK she bleeps a lot and storms away coz she's "not bleeping dealing with that."

Tip Meeting! $1080 usd each, ooh, that sucks. Hahaha for two days I'm kidding that's pretty freaking awesome. That was the bad news, the good news is that they're going to a resort the next day for some relaxation.

I can think of 1000 things I would rather do than go to a resort with the people I work and live with. One is laundry! Another is pushing short sharp nails into my skin.

The crew will be working towards turning over the boat for the rest of the day, well, except Conrad, who's gone to buy a birthday present for his ladylove. Jamie piles on with the gang complaining about Conrad's lack of attention now that he's in a "special friendship" with Hannah, let's see when this all comes to a head.

Adam and Brooke go shopping with Conrad for the Hannah's birthday party (while everyone else cleans the boat), Adam talks him into getting Hannah Crocs. Dayum.

Colin thinks he and Brooke have a connection, but as he says, he is the WORST at reading girls. Brooke is all João all the time. You're not in the friendzone, Colin, you are zone-less. You are Coworker.

Dockside BBQ but it's cooold. Kasey comes out in a midriff top complaining of the cold so João offers her his sweater, but it's early. She's not ready to put away her outfit yet, first she wants him to look at her bellybutton piercing because it's 2005. Brooke's off in the corner doing her homework with João's best friend Mason, who didn't even rate an intro. It doesn't matter, because João is alllll over Kasey.

Hannah is forced into the Crocs then throws them into the water, sorry about the 40 Euros, Conrad! There's a cupcake battle and Hannah alllllmost gets away but then after some begging to save her expensive shirt, there's some wary kissing under a streetlight.

Back at the table, João slurs about how happy he is with Kasey and he's made his choice...then Kasey gets up for a minute and Brooke moves over into her seat. She begs João to tell her how he really feels and he kisses her.

He just said he was happy with Kasey literally five minutes before then what he wants is to be kissing Brooke? She looks like the canary who got the cream (wait, is that a cat?) and he looks drunk and we're oot.

Sort yourselves, young 'uns! Next week we have Ken and Amber Novotny, which makes that their third appearance on Below Deck Med as there are seasons. Stay thirsty, my friends! Cheers m8t!