Welcome back to Unforgotten, one of my favourite British dramas. It stars Nicola Walker and Sanjeev Bhaskar and is written by Chris Lang. The last series wiped me out, it was wrenching and awful yet so beautifully rendered that you couldn't look away. Let's find out what they've in store for us now.

We open at a busy construction site late at night where an excavator has just uncovered a grisly discovery. A large portion of bone has been unearthed.

DCI Cassie Stuart (the sublime Nicola Walker) heads to the site, where DS Sunny Khan (Sanjeev Bhaskar) is already on scene. She's been having trouble sleeping and if they were to suggest a method to correct that during the series, I am all ears!

DC Jake Collier (Lewis Reeves) fills them both in on the find, Raheem (Liran Nathan) on site believes he found a hipbone.

We've over to Hamhurst, West Sussex now to meet our first suspect! Dr. Tom Finch (Alex Jennings) is explaining the nature of grief to Harry, whose wife of 63 years passed away two years ago and is struggling.

On site, the detectives are staring at the bones in the ground, Cassie asking hopefully if the archaeological appearance of the bones means super old, but Dr. Balcombe (Georgia MacKenzie) will not commit. There are no other clues, just the bones of someone who used to be female. 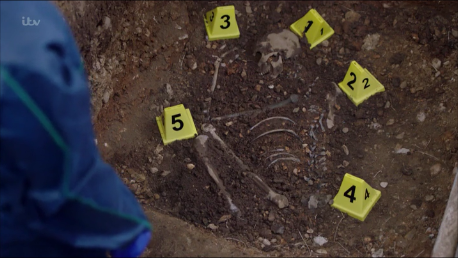 The investigation continues back at the station as Cassie calls her Dad Martin (Peter Egan) who confused her by not coming home the night before. He's got a girlfriend!

A bearded man heads to see his puppy in his Volkswagon caravan, hullo suspect number 2!

An autopsy in underway, the bones do indeed belong to a young woman that was buried within the last 50 or 60 years, tops.

We're on to suspect number 3, he's bucking himself up for a large sale, muttering "find the need, sell the want" to himself for courage. I'm not in sales, but I'd suggest not looking as though you were about to burst into tears myself.

This is Pete Carr (Neil Morrissey from Line of Duty! I need to get back to that, I quite liked that show) and his pitch to Mr. Salthouse (Andrew Neil) is four shades too desperate to work. He gets $3,000 to invest instead of the $10,000 he needed but I'm shocked he got anything, and an unsigned cheque no less. Something is not right with our anxious Mr. Carr.

There is a small piece of metal attached to the bones, it has a mark instead of a serial number, so our team might be looking for a missing person of foreign origin.

Suspect number 4 is a celebrity, James Hollis (Kevin McNally who was in season three of Downton Abbey, I look forward to seeing him if I ever get past season two!) is an author and TV personality. He calls his wife Amy (Emma Fielding who I recognise from somewhere...) in between recording; it appears their son Eliot has gone missing. He's going to meet with daughter? Daughter in law? Mel (Sara Stewart from Doctor Foster!!) later to discuss.

Beardy suspect #2 is artist Chris Lowe (James Fleet), business is quite good! Gallery owner Rob (Mark Fleischmann) is willing to give Chris the $4,000 he asks for but there's a definite pause.

Why does everyone need thousands of dollars/quid?

Dr. Tim sits worrying in his practice, a local woman by the name of Alison Pinion (Gabrielle Glaister) has made some allegations of impropriety, it's making him second-guess everyone's actions. Tim's wife Carol (Amanda Root) does her best to allay his concerns, and hey: the girls are coming over tonight!

A doctor is able to identify the mark made on the metal on the bones, it's a Cypriot company that made it and only since the 80s. This is a brand-new cold case for them!

Cassie and Sunny brief the team on what they know so far, they're looking for a European female teenager between the ages of 13 and 15.

Everyone pauses when she gives the age range, Cassie is visibly affected.

"Somewhere there surely must be parents who have lived in a world of almost unimaginable pain for many many years. Let's give them their child back."

Sunny narrows down the time period between 1995 and 2004, that's excellent news for searching! Cassie's found a hospital in the most likely area for families to visit in Cypress, let's check those records!

Well now, this is quick, we've got James calling Pete (who is very broke and not a very good salesperson, apparently) wanting a meetup with Chris and Tim, all of our four suspects together! How convenient!

Oops, my bad, it seems Mel is James's first wife and the mother of their missing child. This isn't the first time their offspring has gone walkabout, they interview his roommate then separate to start searching the usual spots.

Chris is acting a little sketchy, even for Unforgotten, he calls a woman with killer cheekbones and an accent to ask about a little boy who's been having bad dreams. But not about his dad, meaning that Chris can't be his dad. Hm.

Cassie videochats with her son Adam (Jassa Ahluwalia) who's in New York and has to go rather quickly when a woman's voice is heard. Cassie's dad is out with his girlfriend and even Sunny has a houseful, I bet Cassie is feeling more alone by the minute. Maybe she should date? HAHAHAHA LIKE IT'S THAT EASY

Sunny did find out that the hospital in Cypress has lost its records before his party started, boo!

Tim's dinner with his girls is slightly marred by some slagging of his first wife, mum of his two girls, but he's very gallant about it. As is his second wife Carol, whom he's supposed to be talking about instead, as it's their tenth anniversary.

A man profess his support for Dr. Tim in whispers who responds by taking it out on the server who poured them corked wine.

Cassie leads the team in next steps at the station, this bit is going to be tricky. The "least worst" option is asking each of the families if their missing child broke their arm while on vacation in Cypress, she reminds everyone gently to be careful with their inquiries. For all but one family, this will not be happy news.

Cassie treats all of her cases with such grace and respect.

Pete's marriage is on the rocks, not least because of his inability to properly triage his finances. He tries to talk his wife Maria (Indra Ové) into a quick getaway but hasn't any money to pay for shoes for his kiddos.

DS Murray Boulting (Jordan Long) has a lead! A good lead, as Jessica Reid (Bronagh Waugh from The Fall!) remembers her sister breaking something needing a cast while one holiday in Cypress!

Hayley Reid went missing from a party in 1999, her boyfriend Madrian (?) Mallory was suspected. DC Fran Lingley (Carolina Main) is spooked, she remembers the case because she and Hayley were the same age.

Chris is visiting the woman and child he spoke to on the phone, she is Jamila Faruk (Sasha Behar) and not the least interested in marrying much older Chris. He stumbles through a wrenching marriage proposal which she politely says "wow!" to without answering. He leaves her with a lovely ring, he'll see her at the centre tomorrow. It was all the more sad because he seemed to want to help and to have a family as much as he wanted to marry Jamila.

We're at the first stage hearing for Dr. Tim, who has been accused of verbally abusing a patient, overheard by the patient's daughter Alison.

Jessica Reid wakes up her mum to ask about Hayley's arm, who did indeed have a plate put in her arm in Cypress. Ah but Suzanne Reid is Brid Brennan, the stone cold mum from Come Home, so I will have my eye on her, however frail she appears here.

Oh good, James has found his son Eliot (Tom Rhys Harries), and I'm quite surprised. I was expecting to see someone down on his luck and living out of a gutter like young Steven (John Scougall) we met briefly, but Eliot has on a gorgeous flash outfit, heels and a faceful of expensive makeup. He looks like one of the pimps from The Deuce had a love child with David Bowie. Regardless: he does not want his dad's help.

Pete crosses the line and takes the $3,000 he got from the pensioner at the top of the episode while we get a closing montage of everyone else dealing with everything we've learned.

Chris (he really should at least be a Christopher with that magnificent beard, I'd take an Alistair in a heartbeat) has a cuppa in his caravan with his pup, smiling to himself as Jessica walks to a desolate place to call the police with the news.

Jessica collapses by a bench and her cries take us out of the first episode on Unforgotten series 3.

Whew, so heavy. Nicola Walker handles the subject matter with such care, I love watching her onscreen. It's hard to explain, but it's almost as though her deftness makes everyone else look a little bit like they're shamming, do you know what I mean? At any rate, we've got our victim, what could our four suspects possibly have to do with it? Until next time, when we find out more. Gday.