Okay so I maybe missed the timeline (A WEEK. I had a WEEK), but Below Deck Mediterranean is sure to have lots to keep us occupied, right? Let's roll right into it because I think our lovely chief stew is in troubbbbleeee...

Oop, I forgot the real dramz last week was 23-year-old bosun Conrad Empson accusing his new girlfriend (gf? sorta?) and our chief stew Hannah Ferrier of being a golddigger and she was NOT having it. She likes nice things, Conrad, you'll understand once you're able to shave and your voice changes!

Conrad is trying to enjoy his fugue state in the corner, but his lead deckhand João Franco keeps dicking about trying to get his attention. You steal his shoe and call CONRAD immature, João? I remember that shite from 5th grade, son.

It devolves into a pushy-pushy-shovey-shovey, or rather a "don't talk to me like that!!" - "walk away!" match and both sides regroup to shittalk with their current allies aship.

João thinks he took the high road, even if he can't talk. Or walk. He dronk.

Back on the boat, Hannah's changed into some impractical leggings to sip champagne in and talk some shit to chef Adam Glick. He gives it to her straight: she knew Conrad was a decade younger and broke as a joke, what did she expect? But she liiiiked him.

The next morning second stew Brooke Laughton and Captain Sandy Yawn reminisce about the first day of charter with Ken and Amber Novotny: everything went great! There was no Hannah to fight with...Brooke does excellent service and Captain Sandy digs that, they're talking about her great service when Hannah walks in and walks right back out. She goes out for a smoke, sure.

Third stew Kasey Kohen isn't done with João, who overheard her talking about him to Brooke. She's not "being a friend" when she tells Brooke she'll make sure to keep an eye on her fella so he doesn't make a fool of her. She's massaging her own hurt feelings at not being chosen by undermining their relationship as much as she can.

Conrad comes down in the middle of their talk and decides to go off about the "Jezebel" situation. I assume he means João's alter-ego Jezebob.

They're having the preference sheet meeting 3 hours before charter?? Ohhh, it's another of Captain Sandy's friends, do NOT keep her waiting 23 minutes for a damn egg-white omelet, Adam! Lizzz Kritzer is the Primary, she'd like Captain Sandy to join her as much as possible. Yayyyy says everyone but me! Other guests include Michelle Reilly and Vickie Cardaro, one owns a wine store!

Time to finish flipping the boat, all hands on deck! Well, all the stews but Hannah, she's busy texting in the bridge while the other two do all the work.

Does she know where some Bravo skeletons are buried, y'all? Or is it all the bra shots while dressing?

Deckhand Colin Macy-O'Toole has the same tan on his legs that I have on my feet!

Conrad takes Hannah out on deck to air things out, but Hannah's done. He asks her if they can work back into it?

But they end up kissing and making up somewhat. She thinks it's maybe good that she's stuck in close quarters and has to work through everything.

Lizzz has a super deep voice and a totally chill vibe. The crew works like crazy while Hannah takes everyone on the boat tour.

Adam's got charcuterie and fruits ready already, no messing about on Captain Sandy's friend's charter! He screwed up the last time, so it's all olives and cheese all day. Lookit where they are! 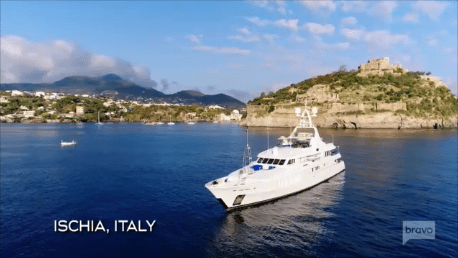 The ladies like their wine chilled, yo! Even red.

The guests head out to play in the water while Brooke cleans up, Hannah naps and João flirts / makes up with Kasey. She's just very used to men chasing and not catching her, it's her thing. João deciding to pursue something with Brooke is not part of that scenario.

Kasey asks Brooke what the theme is for the clambake that evening, isn't a clambake a theme? I don't know, I'm not from the Hamptons! Anyway, isn't it weird that the second stew is setting the theme? Just as I'm thinking that, she tells us that she's set the table every single time this season, so I'm flashing back to last season with Bugsy flipping her wig around this point of the charter season about Hannah never doing the tables.

Even Kasey has been doing more than Hannah, Brooke calls Hannah all "fur coat, no knickers" and now I have to use that within the next 24 hours or I expire. I don't make the rules!

Brooke just had to do all the setup, she doesn't have to serve supper, she can just come back to clean it up, okay? And then Hannah hasn't properly chilled the wine dun dun DUN. There's Captain Sandy sitting there at dinner listening to the guests' disappointment.

She grabs Kasey and positions her near the door to watch the table. Don't move!

Hannah sends Kasey to do the cabins and there's Brooke to help serve after all.

Supper time! We're having a full crab boil, baby new potatoes, corn on the cob with herbs and so much shelfish!

Where's Kasey? Gone and the guests want ice and buckets for their shells and and...Captain Sandy is mad. She knows Rich People Service and this ain't it.

Deckhand Jamie Jason is wondering where supper is for the crew? It's past 10 pm at night and she has to take her antibiotic with food. Adam comes up with the leftovers, no harm no foul.

Brooke and João cuddle in her bunk, it's cute until he says he still plans to break Kasey's 8-year dry spell. Not funny, Brooke's been cheated on by everyone she's been with and she's feeling skittish.

Next morning means lobster benedict and lattes, time to prepare for a trip to Ischia! Captain Sandy makes sure Hannah sends people who haven't been. The crew have to carry a tonne of things up a huge amount of steps, but it looks beautiful up there!

Jamie sets up all the toys back on the boat by herself, woooo!

Hannah texts in the kitchen while the crew works their ass off serving the weathy in the sun at the top of a stone hill. I guess there wouldn't be any way she could go, anyway. She and Conrad decide they'll go to Prague.

João and Kasey are full-on flirting again, right in front of Brooke and I have to wonder if he's one of those people that "joke" about their real intentions and then later say: but I told you!

Adam buys fresh octopus off local fisherman and I am so so very sad. Octopus are creepy and scary but also smart af and they shouldn't be eaten.

Adam forgot to feed the crew again so he could focus on serving the guests, and maybe not kill them.

The food looks lovely, the guests LOVE the poor smart octopus. Hannah gets Colin to watch the table.

Adam comes up in a t-shirt to introduce the main course, I mean COME ON.

Hannah and Conrad cuddle and make fun of Brooke and João, who are having a serious discussion about whether or not he's still a player. Oh Brooke.

Captain Sandy noticed how much work Jamie was doing on board, she rewards her with driving the boat out of dock. Has Conrad done that yet?

The guests are leaving already! They were so lovely and chill! I spy a big tip envelope!

Kasey gets sent to re-check her work in the bathrooms, this is Hannah being nice and not giving her a bollocking. I will say that's exactly the language I use with my six year old: did you clean your room? Did you want to make sure one more time before I come check? I THOUGHT YOU MIGHT.

The gang gets ready for supper, Hannah walking into the room just as João pretends to "snap a dickie" on Kasey's phone after pretend-wrestling with her.

Hannah explains what she saw to Brooke while João and Kasey take cuddle-selfie after cuddle-selfie in the crew mess. Yikes. We're oot!

See, João saw Kasey's reaction for what it was: an expression of interest. Now he's checking on pursuing that 8-year itch, but still keeping Brooke coz he likes her too. It's the human condition to want what you can't have! It can be a lot harder than it looks to let that go. Until next time! Cheers