How are we liking Below Deck Mediterranean season four so far? First off: how is it even S4 already?? and secondly, I'm so happy we got Captain Sandy back! She's definitely my favourite captain of the series to date. Let's roll into S4:E02 because we're already late!

We left our gang of yachties carefully serving microwaved filet Mignon to our charter guests, who think the steak is awesome. That is a testament to how good the meat is, not the skills of Chef Mila Kolomeitseva, who also served them pre-made TexMex.

Every chef in the world has microwaved food; it's just that it's not supposed to happen when you're paying seven figures for a weekend aboard this floating sinwagon.

Chief stewardess Hannah Ferrier blinks extra while Chef Mila pats herself on her tiny Siberian back. She was sick and she still pulled it off!

Deckhands Travis Michazik and Jack Stirrup put the water toys away while Captain Sandy Yawn wanders into the galley to see how everything went. She can't believe that Chef Mila was gonna serve those crappy nachos to paying guests either.

She's extremely relieved to hear that Hannah refused to serve those crappy nachos.

Travis and Jack bond over rolling towels until Captain Sandy calls Jack up for anchor watch.

The guests eat alone at a giant table on the deck while Hannah coordinates scheduling with Bosun João Franco. He'll stay up late to help her. They haaaaated each other last season but now I'm waiting for them to make out.

The guest go to bed as our crew tucks themselves into their tiny bunks below deck.

Second stewardess Ayesha Scott is working the morning shift, Jack and Travis are already on deck and third stewardess Anastasia Surmava is wiping down mirrors like it's her job.

Hannah's being proactive, trying to get ahead of possible issues with food by offering to meal plan with Chef Mila for the evening. They have a beach picnic planned for three and a half hours hence, but not only is it not ready, it's not even been conceived. 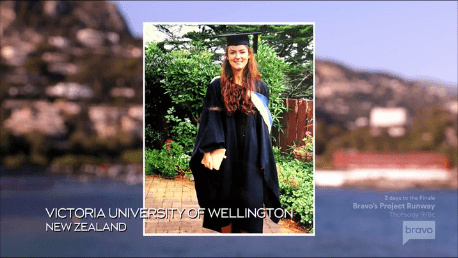 I am all for smart people, but you're not here for either science degree are you, Ayesha? It's more likely those underdeveloped decision-making skills and attention-seeking verbal "accidents."

Dropping anchor in a stunning location!

João fills Travis in on his updated role.

I think I might like Travis after all! They get ready for the beach picnic, which is always a shitshow. There will be wind, ineffectual screaming and at least one dramatic interplay about the food. Someone will forget something important for SURE.

The deck crew and interior gang head to a private little area while João enjoys a break in the galley with his ex-girlfriend's Instagram account. You remember Brooke?! 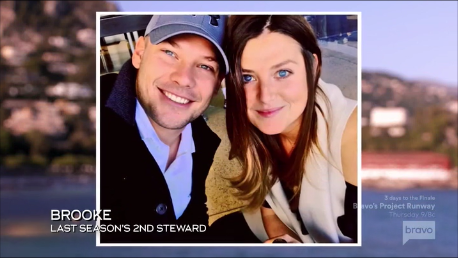 *WHY have we not heard about Conrad Empson, the Bosun that Hannah was bouncing on?

There's no wind yet and the table looks great, but we're almost an hour behind for food so I am still calling myself right. Finally, the food is ready an hour late (SANDWICHES and SALADS) and they're off! Nobody told Ayesha, who's frantically trying to peel off plastic wrap with deckhand Colin Macy O'Toole as the guests speed towards their little alcove. They're a little cranky when they arrive, hopefully all those sandwiches on storebought white bread help smooth things over.

Anastasia is working like a machine on the cabins, Hannah can't believe her luck. All she has to do is check and forget to send tequila to the beach picnic, where the guests have requested margaritas.

João zooms it over on the tender, so Colin can try to catch two in the same hand and breaks them both. Okay, one is saved, the guests are happy.

Jack decides to suck up to Captain Sandy, making her a cuppa and bringing it up to the bridge "like a little roll of silk." Lookit his jaysus HAIR here! That looks like one of those bobblehead cut and paste jobbies!

Hannah and Chef Mila are getting along great!

Thunder clouds are rolling in, so the tender is dispatched to pick up the guests immediately. Jack moves soooo sloooowly. The heavens open up as Jack watches people work. He then goes for a cuppa until dragged back to help.

Except that she doesn't actually measure anything, and baking. is.a.science. BAKING IS A SCIENCE. Baking is a science. It's not a medium that lends itself to experimentation or shortcuts or sloppy measuring with a non-regulation cup.

*I used to be a baker for a living and for funzies, I get that she isn't a pastry chef but the whole world has the internet on their phones (except my mom, who refuses) and it takes exactly 27 seconds to type in "Alton Brown Cake Recipe." Less with auto-fill.

Travis makes us all pause. He's been doing what?

The guests dress for dinner as the stewardesses all try Chef Mila's cake. She went a little heavy on the baking soda, it's essentially one big salt capsule.

Hannah asks if there's a backup plan, Chef Mila is serving that damn cake, it's not that bad. Then she compares Hannah to a deluded donkey and I cannot WAIT for the reunion special!

Hannah brings the cake to Captain Sandy. They're in trouooooble. *dramatic music*

We forgot that third stew Anastasia is a yacht chef too, she jumps in to suggest making cupcakes to rescue the party. She makes a cake instead, it's going to be so much better than the flat little sad soda cake. THEN she serves at the table because Anastasia is going for Below Deck Med Season 4 MVP and so far it's on lock.

"Thank god for your diverse skill set!" squawks Ayesha and true story! Anastasia is already on her way down to the cabins to clean up, see what I mean? MVP

Ayesha gets nasty in the kitchen but she wants us to know that she's all talk.

So Anastasia baked another cake to save the day, we've seen Chef Mila working her Kitchenaid like a rented mule for hours and her icing still looks like shite? Now she's using canned whipped cream and I need to sit down and put my head between my legs for a minute.

The cake finally makes it out of the kitchen, carried by Anastasia, since she made it. Chef Mila is not happy at all at Hannah pointing that out, even less so when the guests ask who baked the cake and Ayesha reveals that it was Anastasia.

I get Chef Mila's point; who would ask such a question on a boat with a chef? But most people know that chefs are not bakers, except on yachts where they must be everything. And you totally airballed that cake, Mila.

The guys make fun of the brewing fight between Hannah and Chef Mila, I think it's extremely lame when men go straight for the catfight description but João's pantomime was AWESOME hahahaha.

Primary Charter guest Jay Robertson is a bit of a silver fox, hey? 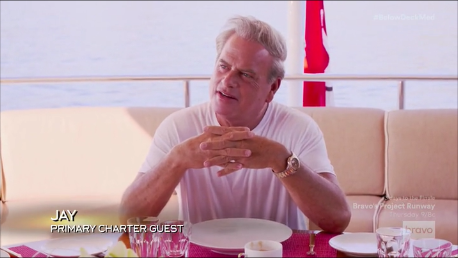 Last morning on charter, the guests are getting ready to leave! I'm surprised that the guests have to pack themselves. Meanwhile João and his crew dock the ship nicely, Captain Sandy is happy.

Ayesha and her unwieldy accent are still trying to shock everyone, she jokes she's inserted a vodka tampon already but tells us privately (privately on TV) that she never has and it's all just so much funny!

Hugs goodbye for everyone! Primary Jay cries even! Awww. Even Colin and João tear up, which freaks out Chef Mila. Men don't cry in Russia, they're making her uncomfortable.

Okay fine, clean up first. Then show us the tip!!!!

The crew sit around and visit, Colin is clueless, Ayesha is inappropriate and all is the same as ever on Below Deck Mediterranean.

Time to turn the boat around then everyone will head for dinner! Chef Mila makes comments about Jack's toothy grin and curly hair then comes out and asks him if he's gay. Happy Pride, by the way!

Captain Sandy calls Chef Mila for a meeting; she's not impressed with her plated service and work. Now that Chef Mila is feeling better, she's expecting the full ninety.

Jack, Travis and the rest of the deck crew drink beers in their bunks and contemplate how Mila will look out on the town with her hair down. Jack is still feeling weird about being mistaken for gay, Travis tells him it's a compliment. It means he looks clean and well put-together! Chef Mila brings down some more beers, the guys all hoot and holler.

Time to go for supper, everyone looks purty and that's just the guys! Hannah, Colin, Anastasia and João pile into one cab so they can shittalk Mila's food, everyone but Hannah is fairly understanding. Hannah's not buying that Chef Mila needs to "warm up."

Meanwhile, Chef Mila is grilling Travis about his nosering in the other cab, he calls her a "classic Russian homophobe." Then we're off and I am counting down the seconds until Mila is kicked off this show.

She can't believe her son might see men kissing each other, how can they even have sex? They need to keep that at home to themselves. Travis has had quite enough, he calls her "an absolute oxygen thief" because he's Australian and they have the best insults.

Is Mila gone yet? How on earth is this going to work? She can't cook and is a vicious homophobe, does she know that Captain Sandy is in a relationship with a woman? I don't believe Captain Sandy identifies as homosexual, but she is definitely dating a woman right now so how does that work? HONESTLY.