Wooooo it's time for Below Deck Mediterranean and we're getting new charter guests, who's excited?? Me too!! I think they're piling in on the third stew too, hey, who's Hannah making out with? Let's find out! Rolling Below Deck Med S4:E09 A Whole Different Ballgame after the break.

We're back at supper in Antibes with chief stewardess Hannah Ferrier putting her third stewardess June Foster on the spot: does she have a boyfriend or not? She does, but it's chill, apparently, or on a break or texting furiously during the meal or anyway: not gonna work out for deckhand Colin Macy O'Toole at this point, who had his eye on the new American.

June takes off for the bathroom, is she barfing or crying into her jacket? I can't tell! Okay, puking. Dance time!

Surprisingly, deckhand Jack Stirrup is the voice of reason. Above when June said she's dating someone she's not talking to (although texting is sort of talking?), he said he calls those ex-girlfriends hahaha. Now he's in the club trying to talk lead deckhand Travis Michazik into slowing down the drinking as they have a double date the next night with Hannah and second stewardess Aesha Scott.

Jack's even trying to be reasonable about kissing, he's doing his best to avoid kissing Aesha because he's drunk but she's deliberately messing with him hahaha. They're a cute couple, even if they're not a couple. Also cute are Travis and Hannah, full on making out.

Hannah swears she's not getting into any feelings this charter season, when queried by a producer as to the making out, she says, disgusted, "That's not a feeling."

The four lovebirds get into a cab together, much spitswapping ensues, until Jack makes a joke that Aesha looks like she's been raped. *record scratch* party over. Aesha's a pretty cool girl and rolls far past the point of most girls/women, but rape jokes are over her limit.

Ah and Aesha has been raped. Aw man. I'm so sorry. That was very painful to watch, I'm so sorry she's been through that.

Jack is in tears the next morning, he can't believe he said such a shitty thing to someone. He goes straight to her and hugs her to bits while she explains that she doesn't want to be defined by what happened to her.

June's been leaning on former third stewardess and now chef Anastasia Surmava for help on her job but Anastasia's pretty busy trying to keep up with her job, so. Figure it out!

Bosun João Franco gossips with Colin while they wash the outside of the boat (you know, the part that's HIDDEN UNDER WATER), he thinks Hannah could do much better than Travis for snogging. Is he...suggesting that he might be a better choice? Weird.

Travis looks perky, but was in a blackout the night before so heads back to his bunk for beers with Jack while João snickers.

Not for long, because it's time for the Preference Sheet meeting, woooo!

Our Primary Charter guests this time are Johnny and Michelle Damon, he's a retired big time ball player? Captain Sandy Yawn is giving the rundown in the crew mess, which is unfortunately too close to where Travis and Jack are partying in their bunks.

Travis is not very...mature, yeah?

Other guests! Anders Apgar has a full page of preferences, damn. Ending with "I am allergic to being hungry, sober and bored. Unless I'm napping" hahaha I can't wait to meet Mr. Personality! Anastasia is feeling comfortable so we know she'll be rocked this charter.

The Black Water System Alarm interrupts the meeting, Mike the Engineer is up on deck doing yoga so Captain Sandy has to interrupt Travis and Jack so they can figure out what to do. Water is leaking, the engineer cannot be found, Captain Sandy is MAD.

Hannah's having second thoughts about dating a day drinker getting over a blackout and you know what? That's maybe a good call.

Captain Sandy finds Jack standing below after finding Mike the Engineer, she threatens his job for not moving. But. They already found the guy. He was fixing it. And now everyone was working on cleanup.

Hannah lets Travis know she will not be going on a date with a guy who's drinking in midafternoon with his 12-year-old coworker, hard pass. João tries to manage his crew, who are drunkenly joking about whether they can drink before or after five pm, jaysus. I wouldn't be their ages again for all the Red Bull in Anastasia's fridge.

Colin's trying to get out there a bit with June.

He says he's working on his game immediately before he references a rash on his midsection, so he might not be there just yet...

Time to get ready for the date between Aesha and Jack, he's still drinking and that's cool, because he's essentially a legal teenager. He puts on a very sexy suit while Aesha borrows a skirt to go "free-balling" in (nice camera zoom, perverts). She has high hopes for the date with Jack.

Travis is also packing a suit, what? I have never seen even one Below Deck Med cast member in a suit, now we have two and they're double dating? Travis is tagging along, just in case Hannah changes her mind. He sneaks up on her smoking on the fore (aft?) BOW! deck and I'm sure that won't be freaky for her.

Travis tells us a little bit about himself, he doesn't come from a family of partiers, but working such a physical job it became habit to throw a few back. Every single day. He and Hannah make up.

And have a lovely date on the bow chatting. 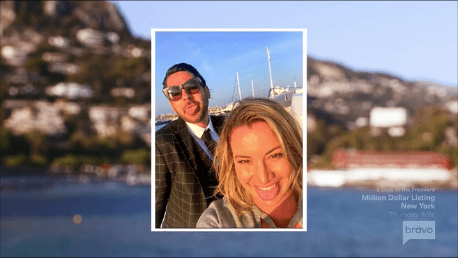 They sit on the bow while Aesha and Jack have a great time. He's not her usual type, she likes the alpha male dudes, but spoiler alert: they're usually arseholes. Jack couldn't be further from that testosteroni stew and she likes it. A guitarist accompanies their first kiss.

June still hasn't figured out when she's allowed to eat, what?

Presented without comment: Aesha climbs on top of Travis for a hug in his bunk as Jack pees with the door open, she scoots over to check out his "willy."

Provisioning time! Hannah takes the opportunity to shittalk June because she has to prepare her lemons and limes booo. Hannah thinks she's paying off a Karmic debt.

Boat tour! Hannah takes the guests around while João is led to the hallowed bridge to start the de-docking process with Captain Sandy. He's frightened but excited, it's his first time!

Inside, Mr. Personality Anders Apgar is talking. And talking. And STILL talking and did you know he's a gynecologist?

João does a decent job of de-docking, getting not enough support from Jack who doesn't mention the boat zooming by the bow. Whoops!

The deck crew unloads luggage while Anastasia preps lunch and Aesha tries really hard to get June up to speed on table/place setting while Hannah glares on.

Anastasia is making grilled chicken ceasar salad for lunch. That's literally all. Hannah and I:

The guests are here for a good time, not a long time, so they are already riding the girls hard. Hannah disappears for a moment and Anders starts screaming for her immediately. This is going to be a loooooong charter. Figuratively as well as literally, they're staying twice as long as most charters. I think.

They love Anastasia's chicken caesar salad, though, whatever.

Travis is working in the galley AND on deck, he's tahred. Hannah makes the unbelievable choice to leave June alone to serve while she takes a nap.

The guests are having an awesome time on the water toys with the deck crew's help, but trouble is brewing asea. The water is starting to rock and Captain Sandy is worried about how choppy it's getting. That means João and Colin have to bring in the water toys by themselves, until Primary Charter Guest Johnny Damon jumps in. Travis and Jack are on their break.

Side note: Johnny Damon is a BEAST.

Once again, June doesn't have her radio on, Hannah has to track her down to start cabins while she serves dinner.

One of the guests (not sure if it's Mr. Personality because there are two gynos aship) insists on talking about circumcision at the table, he even stops Hannah to ask how she feels about it.  Jack and Aesha are discussing his foreskin when Anastasia reminds them that she needs quiet while she's plating, thankyouverymuchbutwithoutathankyou.

Aesha scoffs, but it's worse when June wanders in and overhears Anastasia's "there's too many people in here" followed by Hannah's "I know."

Supper is plated in due time and brought out; but the filet is not cooked enough. Several are sent back and Anastasia whips them back out slightly more done. June is licking her wounds in the crew mess with Colin, why would Anastasia and Hannah mean girl her like that? She's there to help! She's also new and doesn't really know anyone, so go easy, yachties.

The guests leave the table to literally go wrestle each other in the salon. Full on wrassling. On a yacht.

It's 9:00 am the next day and we're heading to Monaco, woooo! Hannah is already on June's case about her phone but nevermind, the anchor is stuck again!

Travis heads to the side in the tender, but someone's going to have to get in the water. Make that two someones, get in there João and Travis!

The guests are being sent to Monaco in the tender after breakfast while the crew works to detangle the anchor.

June continues to not answer the radio so Hannah has to to looking for her. Travis and João head into the deep as the guests go to town and June and Hannah argue. What's on the anchor???

We're not going to find out, because we're oot for this week! Cheers, m8te!