We left off with new/old second steward Christine "Bugsy" Drake arriving in the middle of a storm, she's bringing the thunder! Bosun Malia White is ecstatic to see her, they've been friends since they worked together three seasons ago. Chief steward Hannah Ferrier is not looking forward to her reunion with Bugsy, who called her a lousy chief stew and a lazy worker lo those seasons ago.

To be fair: Bugsy was right.

Malia takes Bugsy to the bridge to see Captain Sandy Yawn, who's the only one who could have talked her into another second stew position. She's been chief stew since she left Below Deck Med, this is why we're in trouble with her and Hannah working together. On the positive side, Bugs is super capable, creative and gives fantastic customer service.

Question: was she always this bedazzled? 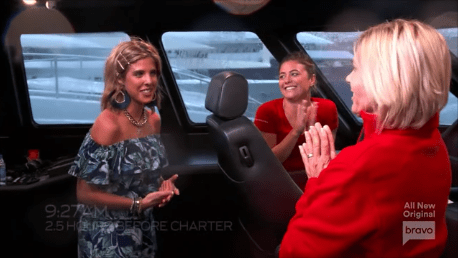 There's a lot going on there *waving hand motion*

Bugsy makes her way down to the laundry room where she meets deckhand Alex Radcliffe for the second time and has an awkward meeting with Hannah. Bugsy asks for a hug, Hannah tries for a handshake, it's just uncomfortable. Previously Bugsy also told everyone Hannah was messaging with a guest after charter, that seems like such a tiny, tiny infraction after the OG Below Deck crew's shenanigans.

To be fair: if someone said I was shit at my job, I'd have a hard time working with them again even if they were right.

Bugsy introduces herself to our adorable Brazilian chef Hindrigo "Kiko" Lorran, look, all the cutsey nicknames!

She has high hopes for the continuation of this season.

Sure! That could happen!

Captain Sandy calls a pre-charter meeting with Malia, Hannah and Kiko, they'll be welcoming Primary Charter guest Justin Thornton (sorry that I had it wrong!) and friends shortly! Also on the trip are Zachary Messenger, Leon Glore and Yuki and Motoko Harata. Rounding out our group are Jane Zhao and Daniel Rauscher.

Okay, I absolutely can't hate Primary Justin because he has a dog named Mr. Scout that's not allowed on board, he plans to visit Mr. Scout on land during his charter. Awwww. I completely understand.

Bugsy has an awkward meeting with Pete, turns out he followed her on Instagram but she was confused because it said "Captain" and he's...lead deckhand? Malia fills her in: Pete's captain of a tender. That's one of those small boats that they tow behind The Wellington.

Robert is from South Africa like Bugsy; third steward Jessica More has been awaiting her arrival with trepidation also. Robert and Jessica have been snogging, Hannah's been relying on her heavily, where will she fit in now? She's relieved that Hannah doesn't like Bugsy, which makes me sad and also not a reality TV performer.

Bugsy sets an amazing table setting, Captain Sandy is happy and Hannah is relieved. She just doesn't like that stuff at all. I'm wondering if I'm going to get a single paragraph started without Bugsy at the front. I cheated and changed the one above.

The guests here! But Hannah is not, she's having a champagne problem and Bugsy has already shown her up in front of Captain Sandy, awww.

Why...is he carrying the adorable puppy? Mr. Scout looks like a puppy who needs to be WALKED and lots. AWWWWWWW 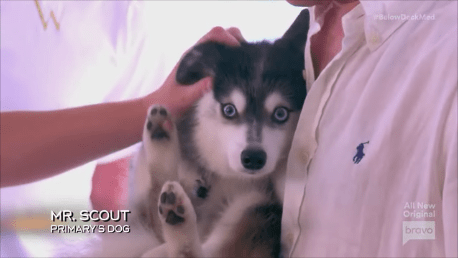 Mr. Scout is brought to a Dog Nanny (HOW DO I GET TO BE A DOG NANNY????) and the charter is underway! Hannah takes the guests on a boat tour while the crew lug their mountains of luggage onto The Wellington in bare feet.

Wow, I already hate one guy and we've not even met. I think it's the Leon Glore I listed above, everything he says sounds rude.

Hannah is caught off guard when Bugsy grabs all the food sitting in the galley and brings it into the salon for munching, Captain Sandy is thrilled. Bugs doesn't sit around waiting for anyone to tell her to do anything, she saw something that had to be done and she's on it. Their tips can only go up from here.

It's okay, Hannah, you're doing great too!!

Bugsy completely takes over guest care after switching to her reds, she heads on deck with a bottle of Belvedere vodka, figures out there are no requested oysters, deflects them perfectly, offers caviar and moves everyone up to the hot tub, all in the 10 minutes it takes Hannah to change into her reds.

Malia comes up with a great fun activity plan for the guests, a little Las Vegas on board! Everyone jumps in to help, Bugsy and Alex working together to set up the table perfectly. He liiiiiikes her, he want to kisssss her or maybe just admire what bright teeth and eyes she has, oh my!

Seriously, Bugs is all eyes and teeth and apparently that's his jam. She had a steady boyfriend last time she was on Below Deck Med, haven't heard nowt as to her status now.

That guy that I said sounds like a moron and is maybe Leon Glore? He just said he'd "hit it" if he was drunk and the "it" was Captain Sandy and I would loathe him but I just have to feel sorry for him. She'd annihilate him.

Pete the deckhand (aka The Unit) was very attached to former second steward Lara Flumiani who just quit, he's texting quasi-sexy stuff at her in the crew mess while we make barfing noises on this side of the screen. Rob's trying to explain his open relationship to Bugs, but since he doesn't really understand it, it's slow going.

Guest Leon is starting to get louder about oysters, Hannah is not as skilled at directing guest satisfaction as Bugs and gets into a tussle right away. She tells him he should have put it on his preference sheet, but he DID. She even brings it out, there it is! Oysters.

*Don't ever let morons have the upper hand by underestimating them, Hannah.

Captain Sandy is on Kiko to introduce himself to the guests, he needs to get his face out there but his English is not excellent (I think it's great! Way better than my Portuguese) and he's a bit shy. He agrees to some out with his paella or seafood something with lots of clams (herk).

The guests play poker until 9, when they come into the main salon to admire another of Bugsy's table settings. 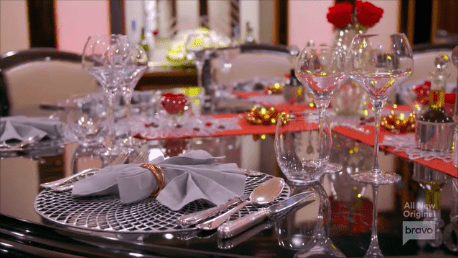 The dinner is delicious, but the guests are ready to party. There's a car coming to get them at 11:30, Hannah is ready for them to goooo.

They party until 3 am while the crew wipes things on deck and waits, Leon's even rude calling asking for a car to pick them up. Honestly.

Alex and Hannah take care of the drunk guests and the friends they brought back from the bar, wheeeee.

Hannah finally calls all the extra guests a taxi at 4:30 am but it's 6:30 before she can go to bed and Alex is still up cleaning. I never understand the guests that want to treat a superyacht like your basic nightclub, they're in SPAIN. You can't even go there right now unless you're already there!

Captain Sandy decides the wind has dropped enough to leave the dock, yay! I'm sure the guests will appreciate that in their hungover state. However. They can't de-dock as one of the guests went for a walk after Jessica said it was fine. Literally seconds after a clueless Jessica escorts the guest off the ship. It takes an hour to gather her up, in that time the wind picks up to 15 knots, which is bordering on dangerous. Typically you wouldn't leave deck at 15 knots.

There's a problem with the ground lines. Basically Pete messed it up and then got sarcastic on the radio. Captain Sandy will not take that, and neither will Malia. She calls Pete on it right away, doesn't look as though they will be hitting the water today after all.

Malia is called to the bridge, she suggests to Captain Sandy that they bring all the boat's toys out to a close-by secluded cove.

*You can absolutely tell I'm Canadian because I immediately thought: can...they do that?

Kiko is working his butt off, he's got a beach picnic to prepare and a six course menu for dinner in between custom omelets and poached eggs. I don't know if anyone ordered those but I would.

Bugsy is still serving breakfast as she's packing the beach picnic, Jessica...is slow. So slow. Even Captain Sandy tells her to HTFU. The four extra guests from the previous evening are coming to the beach picnic, sure! Add one and a half times more work without notice, love it!

Primary Justin wants to see Mr. Scout, so Jessica has to wake up Hannah so she can get the Dog Nanny to bring him for a visit.

Look at this DOG!! 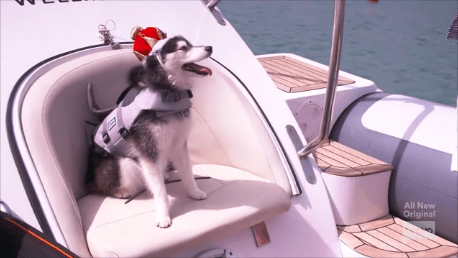 Everything gets set up, the guests are happy and fed (after complainy-asking if there was going to be food) when Captain Sandy gets a call. Glass and tents are forbidden on that beach. I'm surprised they didn't know that.

Hannah does try her best, pouring alcohol into plastic bottles and such but with the tent gone, the guests don't want to stay. She sets them up for a swim and they start takedown.

The real problem is that they look like rank amateurs, not even knowing the regulations around that beach they just decided to dump their stuff on.

Speaking of extra work, there will now be 12 people at supper for Kiko's six course dinner, that makes 72 courses! Yay! I'm sure there's time to provision all that in between afternoon snacks and drink runs.

We're out! See you next week, happy Canada Day!