Ahoy! It's time for Below Deck Mediterranean where we're going to meet another gang of financially secure pretty people, woooooo! Rolling into my BDM S5:E07 No Mushroom For Error recap after the break!

We left off with third steward Jessica More smashing her finger in a cabin door, she thinks it's broken. (I'm not looking). Second steward Christine "Bugsy" Drake finds her crying in the galley and radios Captain Sandy Yawn for advice. Jessica is packed off to the hospital, Captain Sandy calls bosun Malia White, chief steward Hannah Ferrier and chef Hindrigo "Kiko" Lorran down for a pre-charter preference sheet meeting.

Jessica gets back from the doctor with her finger in a splint to be greeted with kisses by crush deckhand Robert Westergaard. Although I guess if you're making out and cuddling, you're past crush territory, right?

Jessica shows her boss Hannah, who hopes she heals as quickly from this as she did from her boob job, only one week off ship!

Captain Sandy warns Jessica that they may have to bring someone else in.

But they have no choice, she'll have to work this charter with her lobster claw.

She cries/pouts down below deck with Rob, she doesn't want to leave this situation. Bugsy takes Malia aside to talk about lead deckhand Pete Hunziker. He's been super inappropriate all along, for some reason he really ramped it up with Bugsy and she's uncomfortable. Malia tells her to take it up with Captain Sandy.

Captain Sandy's busy with Hannah, telling her it's up to her whether they replace Jessica or not. Hannah goes straight to Kiko to have a smoke and strategize, obviously she doesn't want to fire Jessica but she's not sure how much work ol' Lobster Claw is going to be able to get done.

Captain Sandy is extremely unhappy with what Bugsy has to say about Pete's chatter below deck, she calls him up to the bridge right away and tells him she's thinking about firing him on the spot. He stammers through an apology, the thing is that he knew right away what he was in trouble for and where was that knowledge when he was shooting his mouth off in the galley at Bugs?

Pete doesn't say a word to anyone, but this isn't over yet. Malia calls him up on deck too.

Malia goes into more detail than I would have, but she is on reality TV. Once again, Pete nods and doesn't say a word. I'm very surprised we're not seeing any confessionals or producer interviews about what he thinks about being called on the carpet for blatantly sexist and unprofessional conduct.

Provisions are heyah! Kiko hasn't stopped worrying about his lone upcoming vegan but that's because he's amazing. Seriously, if I ever say anything mean about Kiko you just tell me to shut up.

Pete calls Bugsy for a meet on deck while Malia gathers deckhands Rob and Alex Radcliffe to explain Pete's demotion, they're not surprised. Pete apologizes to Bugsy, who is kind and clear and ready to move past this awkward time.

They do not settle it with a hug.

The guest are on their way, time to change into dress whites! Jessica needs help from Rob with buttoning her blouse, first time he's buttoned it UP!

*That reminds me of the time I went for a facial at a spa and the esthetician did UP my bra, first time for that! We had to laugh.

Guests are here! Ohhh they're CUTE.

I love it when men get fancy! Why wear monochromatic colours when there are patterns in the world!??

Hannah takes the guests on a boat tour while the deck crew schlepps in the luggage and Kiko works feverishly in the galley, muttering "vegan. Gluten-free...vegan" under his breath.

Malia leads the...it's not de-docking, it's disembarking! I was sure there was a real word for it and here we are!

One of the guests (Giancarlo, I think? Super hot) is particular about his juice, this somehow leads to a minutes-long discussion in the galley about whether Hannah ordered lemons or not.

*Really, Bravo? You guys have one million hours of footage that you have to distill down to a catchy storyline and you came up with 3 minutes on lemons? That was the GOOD stuff?

Guest Joel Leizan thinks Kiko is cuuuuuute and he issssssss.

One of the other guests is 100% high maintenance, the super hot ones always are. It's just too bad they're down a stew, really, because he wants unpacking and extra mushrooms.

The guest (maybe Edwin) walks in as Lobster Claw is unpacking his suitcase and doesn't even feel bad! Well, maybe he does because he just wants her to unpack one suitcase but that could be if he has all the fun stuff in the other one. He asks for an iron and I don't understand: wouldn't the stews do that too? I know they used to, I still have nightmares about Kat and Amy mocking crotchless ginch some women from New Jersey brought on board on OG Below Deck.

You remember that lemon discussion? I wasn't paying attention, apparently it was Bugsy throwing Hannah under the bus for not ordering lemons to Kiko but Kiko is 100% #TeamHannah so he relays this information to her right skippy. She says "Oh I know, I'm sleeping with one eye open."

Bugsy manages to feed Giancarlo a drink he actually likes! He has a juice thing.

The guests are all gorgeous, they head out on jetskis and paddle boards to have fun in the Mediterranean, the slide is coming down! 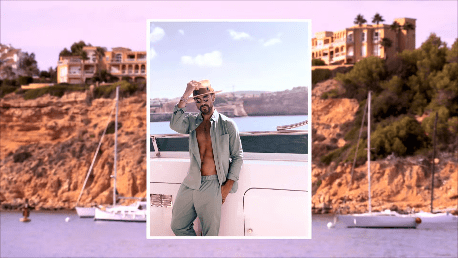 I wish I had five cents for every time Kiko complains about the lone vegan aship.

He's really struggling; I'm trying to figure out why Bugsy decided to serve lunch on wooden boards on the lower deck close to where the water toys are docked.

Edwin The Vegan asks for his clothing to be steamed, the whole crew is exhausted and ready for this day to be over. They haven't even done dinner yet! And they're out of mushrooms so what's the vegan going to eat if they don't get provisions in time?

After this never-ending day, Bugsy is still serving shots with a smile and a dance step.

So Kiko got his mushrooms in time but the mental load he's carrying around has sunk his timing. He's 45 minutes late for dinner and the guests are getting restive. Kiko JUST served a 72-plate dinner two days ago!

Aw man, Kiko, thirty minutes between a caprese salad and the entree has Giancarlo calling you an a**hole, that's still not okay, Giancarlo! These guests are very hungry and there is no stew around to hand-feed them small cheese squares, so they're getting unruly.

It doesn't help that Primary Bernardo is served raw sea bass, booooo. Get out of your head, Kiko, you got this!

The guests are still hungry after being served, Kiko is dispatched to prepare three more portions. That would be fine if it didn't take so long, people don't understand that they're dealing with a lone chef who is prepping, cooking and plating their grub himself.

I can't tell if it's editing or not (probably) but the guests ringing bells and chains to get more food at midnight is...a nice touch.

We're out to Kiko yelling at himself in the kitchen and Rob and Lobster Claw making out in his room. Cheers!