Okay! We left Below Deck Mediterranean in the middle of a cliffhanger last time, which is hilarious because the whole season is continuous and they do things like drag a tip out over three episodes but here we are! Waiting to find out if the drugs found on board are of an illicit nature and if anyone is being walking offship today. Let's roll into my recap of Below Deck Med S5:E12 There's No Place Like Home after the break!

There is Valium and something that looks like a pen? 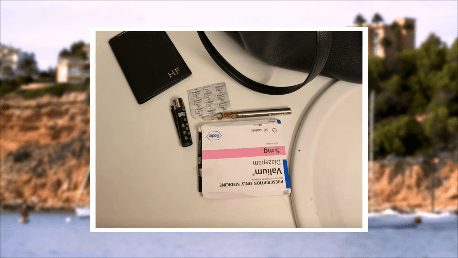 I don't know, I'm not an expert but at the very least the Valium looks like a prescription. Let's see what Hannah has to say internationally about what's in her purse.

Okay, apparently there is marijuana in there, is that illegal there? It's been legal in Canada forever, I forget. Hannah needs to present her prescription for her Valium, before she goes and gets it she tells Captain Sandy she hasn't taken even one Valium while on board.

*Cut to cameras in Hannah's bedroom showing her with the Valium on the bed and then in her hand and yeah. I don't know why you would say something so easy to disprove. There are cameras covering every inch of that place, except for apparently a crew bathroom where members used to hook up. Where were we??

The rest of the crew continues preparing for charter, which is only three hours away. Hannah heads down to her cabin to get the prescription and Captain Sandy realises she may be flushing any more drugs she has. She runs down to check and finds Hannah in the bathroom with her pants undone and about to pee.

There is no prescription for the Valium, I was 100% wrong.

So. Captain Sandy has grounds to fire Hannah, not having a prescription for the Valium gives her that and the illegal pot pen is the icing on the dismissal. Will she?

She will. Hannah is fired and her time on Below Deck Mediterranean is over. Hannah only has one question:

Holy shite. I did not never see that coming ever.

I know I've given Captain Sandy the gears a lot about her management of former chef Hindrigo "Kiko" Lorran but she's devastated having to fire Hannah. They've worked together for the last few seasons. But. It's Maritime Law that the ship's crew are also Emergency Responders, they can't be under the influence. Now I'm wondering about all the times we've seen everyone schwasted, but still.

I am legit totally shocked. I can't believe Hannah Ferrier, the lone original member of Below Deck Mediterranean is gone.

Hannah walks off the boat so she can call her boyfriend Josh, asking deckhand Robert Westergaard for her suitcase. Captain Sandy follows her outside so she can explain again how terrible Hannah has been and what a bad position she is as a Captain, thanks to Hannah.

Okay, maybe that's overstating, but she definitely is just repeating the same stuff she said in her office and Hannah does not care to hear it. Hannah had an anxiety attack on the boat one night, her helpful roommate Malia reported that to Captain Sandy and now I feel like screaming as much as Hannah does.

Hannah has anxiety, she had an attack previously while on charter. Sigh. Whatever. Let the woman go with whatever dignity she has left, Captain Sandy, stop insisting she agree that you should have fired her. Also, stop saying you can't go to sea with someone who might have to take a Valium.

New chef and Mali's boyfriend Tom Chekkets is having a great time playing in his new enourmous galley, he's so English and so proper. I wonder how his food will be.

Everyone on the ship is trying to figure out why Hannah is packing in the main salon, it doesn't help that Captain Sandy got angry with Hannah for not acknowledging that she cares

and started yelling that she DOESN'T care and Hannah should pack her bags right now!

Honestly. These people are making me so tired.

Second steward Christine "Bugsy" Drake keeps working but third steward Jessica More heads down to Hannah's cabin to find out what's going on. She's worried that with Hannah gone, she'll be completely run over by Bugsy. That is a valid concern.

Hannah tells Malia and Bugsy she did have a prescription for her Valium and that's not exactly the case but whatever. This is the longest packing ever!! Hannah kisses deckhand Alex Radcliffe goodbye and is walked off the boat with pal Jessica.

This is how it ends?

We get a review of Hannah's time on Below Deck Mediterranean, from the highs to the lows to everything in between. She's been ready to gtfo of yachting for years, but she would have preferred to leave on a high note, all things considered. Not "literally."

Captain Sandy promotes Bugsy to chief steward, of course, poor Tom is still rushing around the kitchen trying to figure out what to do and what to get ready. The Martinez group will be here in minutes!

Malia and Captain Sandy continue to discuss exactly what was wrong about what Hannah did, I didn't realise how stringent maritime law is. Any type of drug has to be logged and declared, every single dosage. That's kind of nuts, isn't it?

Captain Sandy calls the crew up to the salon for a pre-charter meeting about Hannah's departure. They sit all in their dress whites with too much to do to sit around while Captain explains it in no uncertain terms. Don't take anything, capiche?

Bugsy is Chief Stew finally, she wastes no time giving Jessica 40 things to do in order. The charter guests are here! Hai Primaries Isaac and Ashley Martinez, joined by Jacob Martinez and Whitney Martinez. Dad Jared Martinez is in attendance, as is Tatyana Lanter. 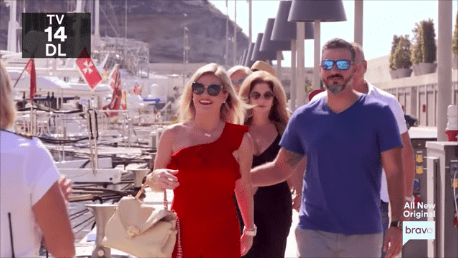 Jared Martinez thinks he's funny; he's going to be a handful, I can tell that already. Bugsy takes the guests on a boat tour, this whole charter is going to be a bit of a cluster.

Malia leads the yacht disembarkment and we're at sea!

I'm still trying to adjust. So is the crew. Deckhand Pete Hunziker asks carefully during supper if Hannah was let go for drugs? Yep, says Malia then they're called down to help wash dishes in the galley.

They anchor in the middle of the ocean and lunch is served! This is Tom's first meal on Below Deck Mediterranean and we've heard all about his classic culinary training so we're expecting LOTS.

The guests give us a hard time but ultimately...they love Tom's food.

The crew cleans up after lunch and the guests head out to the water for diving and water slide shenanigans. This is a large group and they're all doing different things, so Malia is having a hard time making sure there are eyes on each guest or group of guests. There are Martinez' everywhere!

Eventually everyone ends up on the giant deck cushion couch, where I would live had I my druthers. Alex takes drink orders then relays them to Bugsy, who brings up yet more Titos as a giant dild* is being flung around on deck.

*I wonder if this is what it's like for the crew, having to serve drinks and fold towels all while such a disruptive thing just happened. Hannah's bed isn't even cold yet! I'm having trouble focusing.

Oh no. Oh no. The guests ask Bugsy to take the 'sea cucumber' back to their room and there is no way touching someone else's sex toys should be in your job description unless that is the whole job description.

It must be around 4 pm in the afternoon, Primary Ashley casually mentions that they'll be throwing a birthday party that night, cake needed! Sure!

Tom kind of freaks out, it's difficult to bake a cake with no notice and have it look great, you know? Or have it cool  enough to decorate, that's the other thing.

Jessica does the math and promotes herself to second steward as we cut to Captain Sandy requesting another second stew from her staffing agent.

Tom is really freaking out, this is his first day and he's upset in his bunk already, what the.

We've got Jared Martinez taking naked pictures of Tatyana Lanter in the hot tub, then he gets naked and wanders the halls to drop off the giant dild* Bugsy put in his room. Buddy! There are cameras EVERYWHERE.

Tom can't find an oyster shucker so he's using a small knife and pressing really hard and I can't watch!! I literally watched through my fingers.

Guest Jared walks around taking pictures of everything, he wanders into the galley to tell lame jokes to a frustrated 'Tim' whose name he can't even be bothered to get right.

Oh to have money and be the kind of arsehole where you don't even care that you're an arsehole.

Tom's struggling in the kitchen, he's grilling giant steaks (look like Tomahawk?) on deck on a BBQ and working in the kitchen. He asks Malia to flip the steaks, guest Jacob wanders by and cuts off a piece for eating.

Tom was not able to shuck the oysters properly, they're all full of shells and the guests are not happy. He gets to work on another batch for three and I...these guests are not my favourite.

Alex and Jessica met and made friends on another boat, they'll be working together to clean cabins. Alex looks like it's Christmas when he spots the massive dild*, it's "a kickstand!"

Tom follows up his shell-y oysters with raw lobster, he's clearly not used to working alone without a sous chef and he's struggling. I'm wondering if he's walking off tonight to salvage his 'self-respect', at least this is what most fancy chefs are like, right? We had a lovely breather with Kiko, now we're back into the shite with the standard.

Until next time, everyone. Hannah, I'm sending good vibes out to you because that was...that was not cool. Apparently legit, so I'll stop bitching, but wow. Cheers.