Well HELLO everyone, how has your few months been?? Mine's been awesome but now I'm behind Below Deck Mediterranean so we'd better pitter patter get at 'er! Can you believe it's season 6 already?? I hope we get repeaters...and pics of Hannah Ferrier's baby!! Rolling into Below Deck Med S6:E01 A Yacht In Kneed after the break!

Okay! Let's meet everyone, we've got almost a whole new crew aboard. Captain Sandy Yawn is aship, COURSE, and first to arrive is chief steward Katie Flood who has a super wide smile, giant eyebrows and momjorts.

A super awkward greeting later, we learn that Katie is used to directing 7 girls under her which means: she's not used to doing scut work maybe. We'll see how she pans out, giving her sixty seconds break, y'all.

So Malia White is back as Bosun (also known as boatswain, apparently because that's an actual word unlike bosun), interesting choice. Not for Bravo, they live for the drama her presence is sure to create. She was instrumental in getting rid of our last long time chief steward Hannah Ferrier. She was also wifed up to the whiniest chef I ever did see, looks like she and Tom Checketts have called it a day (as if I care).

She arrives at the same time as chef Mathew Shea, but doesn't go say hi to Captain Sandy, instead staying below deck and introducing herself to Katie. Hmm.

How was this guy been a professional chef for the last 14 years? 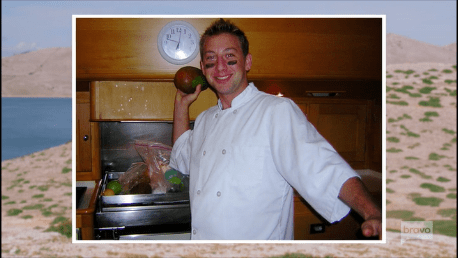 Although. I've been trying to figure out how old my favourite internet chef Matthew Broussard is and he's probably around the same age. Maybe it's just me that's old?

He's enthusiastic and outgoing yet somehow humble, I don't hate him. Yet. He's actually much older looking in the show, with a grizzled mostly bald pate, I buy he's been in the biz for 14 years, I guess. He has a glorious knifebag but it's shiny new so.

Everyone else arrives in a flurry of luggage and boobs as Malia makes her way to the bridge to kiss Captain Sandy's ring. Hm. Malia's been second officer in the Med recently, hm. They're stiff and awkward with each other, which is weird because they've always been close. Are they pretending they don't drink rosé all day and trash Hannah's life choices?

Lexi Wilson is one of Katie's stews, she was Miss Bahamas, which she says she doesn't tell people after she tells people like us and everyone she's met so far, including Katie her boss. 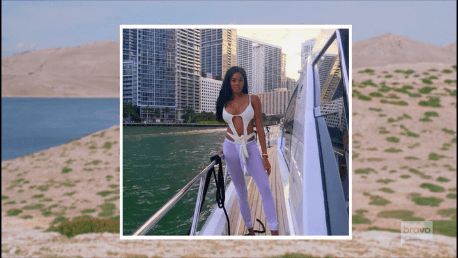 I know what her talent was: remaining upright. Her boobs make my back hurt from here.

Malia's whole deck crew has arrived, we've got Mzi 'Zee' Dempers, David Pascoe and Lloyd Spencer who can only be known as Pornstache, sorrynotsorry. If hapless was a person: 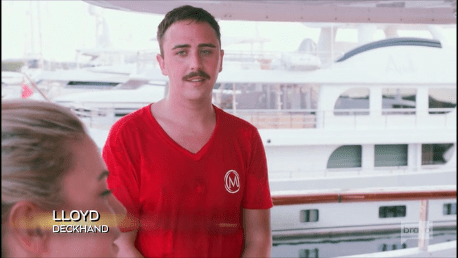 Zee is so young. SO YOUNG. He's also so nervous that he can barely breathe, Malia is very excited that she gets to teach someone this green which is the exact opposite of every other bosun ever on Below Deck.

He introduces himself to the rest of the deck crew as our last steward Courtney Veale arrives. Huh. I didn't think she'd be British, seeing as every single promo shot of her is twerking. Is twerking over in the US? It must be if the Brits are on it. She's the palest person I've seen (except myself), so this pic of her as a "promo girl" is quite something. I smell hickory smoke... 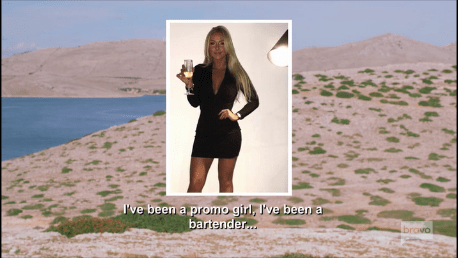 Captain Sandy calls the whole gang to the salon for a team meeting, maybe tell them which wind they are now, hey? Heeeeey the actual crew actually working off camera this season are hella cute, aren't they?? 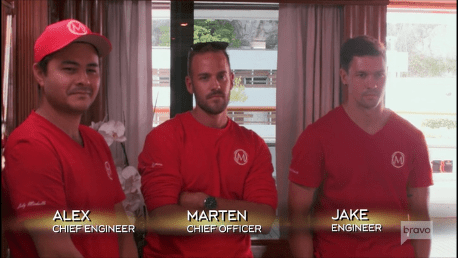 Maybe their life choices disqualify them from making asses of themselves on international TV.

A semi truck pulls up with provisions wooooo! I bet you could stack a shittonne of caviar to lose in there! We've got three pallets of food, what did you order, Mathew????

Lexi is dubbed second steward, edging out Courtney to the less-preferred laundry role. Malia's not naming her lead deckhand (is that a thing?) until she sees what everyone can do, David's eyes narrow in focus and I snort-laugh my water. Eye of the Tiger, David!!

Lexi has a lot of opinions and backstories about people that make no sense to me. Someone(s) treated her like Cinderella because she was in a pageant? Chief stews become lazy bitches when promoted and she just wants to do her own thing? What? People stereotype pageant girls as good cleaners? WHO

Oh no, this boat is gonna suuuuuuck, sorry Lady Michelle, whomever you are/were. The walkin fridge/cooler is two flights down from the galley, how is that going to work for one chef preparing all the food every day? That's a nightmare. Mathew's worried but at least Tom's not here to screamcry in the corner about his reputation.

Pornstache, they lied to you. Your t-shirt is lying to you. You don't look like Nicholas Cage. 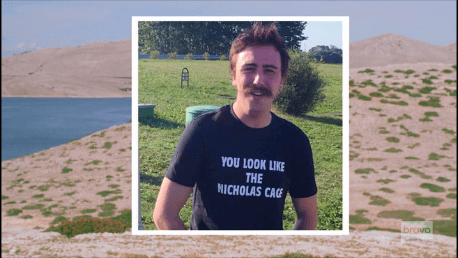 Hold up, we've got another couple of co-Primary guests and you know this is like having four best friends, right? It's an absolute. If everybody is Primary, nobody is, Clint Yoder and Karry Stevens.

Oh wait, those last two are getting married, which makes Katie groan because planning someone else's wedding and making it special in less than 24 hours is...FUN! Think Vegas, Katie! Plus there's a birthday party, bachelor and bachelorette parties, oh yeah, this charter is gonna fly by!

Chef Mat has a story about weddings; his parents look much older and have married each other twice. He was birthed during the divorce so they call him their 'bastard child.' They legit sound like a lot of fun.

OH. OHHHH. Katie is Jack Stirrup's ex girlfriend!!! You remember Jack, he was dating Aesha Scott and it ended weird because she said his psycho ex-girlfriend did some stuff...ooooh. Is that KATIE??

Everyone goes to bed, so I guess we'll find out later FINE. Mat can't sleep, he's up at 3:30 am to get started for the day. He's like me! Too much on the brain, so may as well work (or run) in the middle of the night. Totally normal.

Also like me, Mat's shenanigans running up and down two twisty flights of stairs carrying heavy boxes of food has resulted in one very bad knee. He's going to have to tape that and slam some ibuprofen FAST.

Jaysus, Mat's ready to quit over that knee. He's all nerves, he didn't sleep and his knee hurts and he's ready to go because he can't 'do this properly.' I thought we got rid of Tom already???!!

Captain Sandy stays calm while Mat tries not to cry, he's super freaked out. A good night's sleep would have helped a bunch but he is adamant he needs an X-Ray and an MRI. He's not wrong, good for him! The guests are almost here, but this is his livelihood, I 100% back this choice.

David is helping teach Zee up on deck; David seems nice and competent but so far he's super generic and I couldn't pick him out of a lineup. 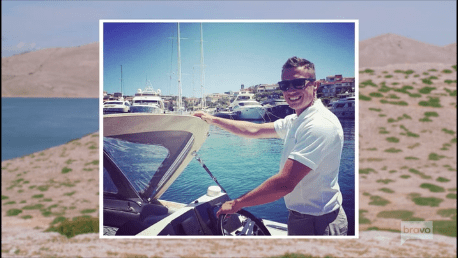 Malia and Katie will be helping sous chef in the kitchen, boy this really is deja vu all over again. Captain Sandy explains to us the protocol for injuries on board; this is absolutely foreshadowing to her freaking out all over Malia later in the season for one of the deck crew getting hurt. Got it: tell Captain Sandy first if anyone gets hurt even a little, she will send peeps out for medical checks, etc.

Captain Sandy explains the chef situation to the crew as everyone listens in disbelief.

Let's do this!! First guest arrival of Below Deck Med season 6 woooo!

And then Captain Sandy breaks the bad news to the guests: no chef right now. Good thing they're already into bottle four of champers; Primary Terez says that's fine, the crew can tip THEM!

This is how rich people stay rich, y'all, they even say stuff like that out loud.

I'm just going to say: I'm not impressed with how Katie interacts with the guests. As a chief stew, she shouldn't look that scared and lost when they ask for stuff.

LOOK AT THE SIZE OF THE LAUNDRY ROOM!!?? 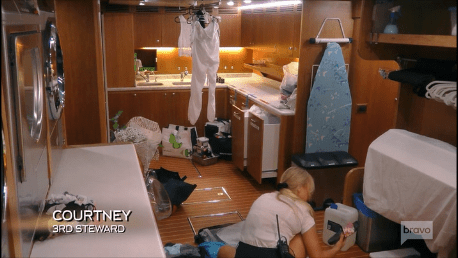 It's usually half a closet, this is MASSIVE! You're not going to be able to punish anyone by sticking them in laundry, look how airy it is!

The guests eat their lunch as the deck crew does their first smooth de-docking. It goes like buttah; as does lunch and look where they are? 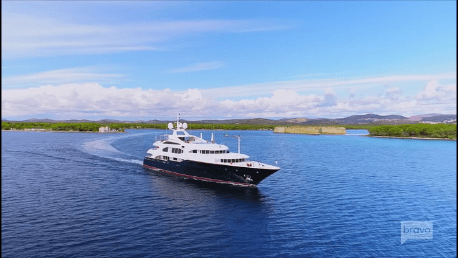 It's a weird blue boat that looks small but apparently is huge (two bath tubs for guests) so I dunno?

Courtney accidentally washed the clothes Primary Terez only wanted steamed, so we're on all the wrong feet today. All of them. Maybe all that air in the laundry room went to Courtney's melon.

She frantically steams some things then hauls them up two flights of stairs in that heat to hang them up for Primary Terez as the rest of the guests get busy on the slide.

Everyone on the crew hates that slide.

Why does everyone drink espresso martinis?? Who wants to be wide awake while schwasted and making unfortunate life choices on international TV??

Captain Sandy has rounded up a sous chef from a neighboring boat to help with supper prep, still no word from Mat. All hands previously on deck are now in the kitchen, frantically Googling how to cook live lobsters.

The sous chef shows up, no idea how to cook the lobsters David has just murdered. Another deckie hits his head on the low ceiling of the swim platform deck, that's going to have to be a drinking game.

Supper is finally served and it is gross. Hella gross and the guests aren't shy about expressing their displeasure. I mean, Courtney tried as hard as she could but that sous chef was no chef at all. I can't believe a dozen lobsters died for this.

Lexi talks with Zee about pursuing an Only Fans career; that's a valid path taken by other other notable Below Deck alumni, so why not? She does seem super impressed with herself. That's important, probably.

We're almost out but then Primary Terez wants to talk to Captain Sandy NOW. Dun dun DUN. I don't know what they think Captain Sandy can do in a global pandemic? The days of freewheeling pulling a chef out of your arse at the last second from the laundry room or Ben Robinson's house are ovah.

I do admire Primary Terez's ability to draw out a syllable for effect, however.

Captain Sandy takes full responsibility but Primary Terez isn't listening, she's too busy screaming on about being on a MEGAYACHT, SANDY. A MEGAYACHT.

And we're oot! See you next time, cheers.