We're back already, trying to get caught up and through this miserable charter on Below Deck Mediterranean with the Percentis and all their co-primaries. LOTS of parties and fancy things are expected but with no chef, Captain Sandy Yawn has been twisting in the breeze.

Let's find out what's gonna shake out tonight in my Below Deck Med S6:E02 It's Not Easy Being Green recap after the break!

Okay, last week we met Co-Primaries Terez Percenti and her husband Lee Percenti, along with co-Primaries Clint Yoder and Karry Stevens who are getting married while at sea with our crew. Sometime between ordering 3 entire pallets of food and dragging it down two twisty flights of stairs, our chef Mathew Shea seriously hurt his knee and bailed for an MRI after preparing lunch for the guests.

The rest of the crew cooked dinner with a clueless assistant chef from another boat, in a word it was:

Captain Sandy Yawn is wiling to take all the blame, but really: her hands are tied. She didn't have a spare chef kicking around and the small fact of a global pandemic means getting another within hours isn't happening, babe, so cool your jets.

They are not cooling their jets.

They're on a MEGAYACHT, SANDY. MEGAYACHT.

She's got this! They're on her team!

The only feedback I found interesting was Primary Terez losing her shite because chief steward Katie Flood didn't put out all her Dollarstore neon party crap. That's Customer Service 101, someone gives you their plastic glowsticks and inflatable Versace floatie? You fcking use that shite. You don't turn your nose up at what someone chose to bring in their luggage from across the world.

Pretty much everyone is new on the crew too, third steward Courtney Veale has been working her arse off in the galley, much more proficiently than the borrowed assistant chef. She had help from deckie David Pascoe, who even did it all with a smile on his face. Impressed. Mzi 'Zee' Dempers is also right in there, second steward Lexi "Miss Bahamas" Wilson has been on service with Katie.

Primary Terez will not be mollified or coddled by her friends, she keeps shouting 'BULLSHIT' while the rest of the guests try to chill and enjoy what they can of the evening.

Including making Katie do an airplane ride with them:

She's working hard for that tip, y'all! The guests stay up until 1 and complete incoherence, time to clean up for breakfast! Bosun Malia White will be prepping for that, she used to help her chef boyfriend do that for Captain Sandy last season but apparently we're not talking about that.

Young English Lloyd Spencer aka Pornstache is on anchor watch, he seems sleepy literally all the time so I don't know how this is gonna go.

Katie heads to bed at 2:30, leaving Lexi and Pornstache to complete cleanup so she can get up to serve breakfast, this has been the worst day one ever. You can't blame the guests for being mad but what is everyone supposed to do? Nobody's got a Ben Robinson just kicking around below deck.

Lexi heads to bed at 3, she calls her mom first and tells us why she's crying. Her dad died unexpectedly only a couple of months before.

The next morning the missing chef hangs heavy in the air. I swear, Mathew just needed some sleep. He skipped it and went right to work at 3:30, no wonder he was so overwrought.

Annnnd he's coming back! Yay! Captain Sandy isn't taking any chances, she calls her recruiter to get another chef headed into quarantine AND a deck crew member. No sense messing around, you can get stuck in an instant, one cough and you could be sunk.

I worked at my worst job ever last year; one week we had five people out waiting for COVID tests, there were only three of us left and if any of us had fallen, the whole place would have shut down. It's a weird feeling, being that dependent on other people's health.

Mathew shows up all perky before 8:30 to an ecstatic Malia and a tough-talking Captain Sandy: she would have dragged his ass back if he hadn't come. Uh huh. I bet he just needed a solid night of sleep and some anti-anxiety meds, don't we all?

Hmmm I'm more right than I thought, he actually left two jobs he hadn't even started because of anxiety, that's hardcore.

Awww Zee has a little crush on Courtney!

He hasn't even seen the trailer with all the twerking yet! This woman would eat him alive, full stop.

Wait. Mathew doesn't want to do crew meals or the wedding cake?

Wow, that's super early for Captain Sandy and I to agree on something. But he's making excuses left, right and center and blowing her off and I'm practically dialing the number to Norma, Captain Sandy's recruiter.

He does talk to the guests; Primary Terez is happy with his proposed menu and I meh in solidarity with the hungover blonde with her tatas out. 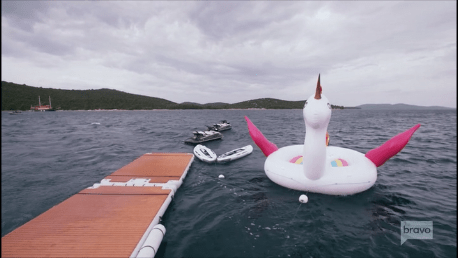 It immediately flips over in the wind.

Katie is running her tiny arse off bringing drinks to the hot tub, they're all mixed and shaken, not one easy beer out of 20. I've never heard a chief stew complain to.the.guests about their complicated order before, that's new. Katie, honestly. Get Lexi up there to help instead of telling the guests they're not getting lunch if they order too much.

Zee rescues Maureen the magical floating unicorn as the crew eats another round of paninis they prepare themselves and Captain Sandy organizes Mat's walk-in cooler.

None of that makes sense, absolutely zero, babe.

Zee wrestles with Maureen for the rest of that morning. He never won, not once.

The guests LOVE Mat's lunch, he's redeemed himself! I mean, I couldn't even see Primary Terez's face because her fork was a blur shoving mussels into it.

Aww I think Mat has a little crush on Lexi, who is absolutely gorgeous and somehow upright. She plays up to him; that's how you get extra food! She flirts when she's bored; if you flirt with her and she has nothing to do, she'll flirt back. She's gonna do great on OnlyFans.

Malia left Zee in charge of the swim platform, specifically telling him to tie on the jetskis but one has gone astray. I can't be mad at him, how could anyone? He's trying so hard! It Ain't Easy Being Green.

Primary Clint is having a bachelor party, fishing with his buddies and I guess Primary Karry is drinking wine with her friends in Maureen. I would be such a better wedding commentator if I didn't hate every single thing about them.

Zee does pretty well taking care of the drunken bachelorettes, who have more fun than the guys coming back empty handed from fishing. They ask Mat to bring them a fish so don't look lame and it's like they didn't even read that sentence back in their heads.

There's a lot of excitement about the upcoming wedding, wow, I hate literally everything about it. Plus we saw in previews that the couple call it off while drunkenly arguing, so I'm having trouble committing.

Dinner time! Mat sends out truffle pasta as his starter, the guests love it but I'm struggling with his plating. If that's what he calls it. I too can dump a bunch of white pasta off center on a plate but why would I?

Why would you, Mat?

A storm is building outside, just as Mat halfheartedly plates some fish everything has to move inside. Fish is difficult to keep warm, so I'm curious as to how this will play out.

Probably with some screaming.

Primary Clint Yoder is a happy drunk, unlike his fianceé Primary Karry Stevens. She's sullen and probably about 5 minutes from asleep upright.

Everyone finishes up early and heads to bed but trouble continues to brew between our betrothed. Guess what sends them into full nuclear mode? A phone charger. And about 16 hours straight of alcohol and sun and one phone call to someone's mother.

That's where we leave it for tonight, with a shirtless Primary Clint looking for his bros and a crying Primary Karry in her room. Until next time! Cheers!