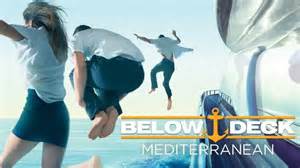 Ahoy mateys! We've got a lively bunch on board Below Deck Mediterranean, let's see if they leave us with one less crew member! Rolling into my recap of Below Deck Med S7:E09 Let Me Be Frank after the break!

Second steward Kyle Vilojen is in luuuurve with guest Frank; a tall 37-year old pancake-nippled dreamy fella with a big smile and just as much interest in our Kyle. It's a LBGTQIA+ charter fo sho with adorable tiny gymnast Liam and many attractively manscaped gentlemen of un-advanced ages. Primary Adam Spinner and his sister Jennifer Spinner are the only full names I got, boooo.

Are we still in the middle of dinner? Because chief steward Natasha Webb's insistence on doing a wine-pairing with each of chef David White's courses slowed everything down wayy too much. There are only two people on service and no deck crew helping, this is a brutal amount of wine glasses to be washing frantically.

Finally it's done, the guests have one hundred glasses of wine in front of them and it's time for a slumber party! Kyle is invited but other second steward Natalya Scudder declines. Tasha jumps in and it's time for mingling with guests!

Even though Tasha's in charge and there are strict boundaries about staff + guest interactions, she's rooting for Kyle and Frank. As we all are.

Kyle tells everyone how much he's attracted to Frank and why, I love it while I worry so much about him being this open with someone he doesn't know.

People can be mean and break your heart and THEY DON'T EVEN CARE.

I mean, not everyone, but sometimes.

Kyle and Frank stay cuddled up together on the sofa for hours until Tasha grudgingly pulls the plug. It's after 3:30 am before they get to bed and they definitely did not get everything done that needed to be done. Nat's pissed at the laundry mess but she also loves laundry so.

Hours of work later, she starts to get mad. Tasha and Kyle did very little, just the basics in between visiting with the guests so Nat has it all to get through.

Out on deck, South Africans provisional bosun Storm Smith and deckhand Mzi 'Zee' Dempers are delighted by deckhand Courtney Veale's impersonation of a German South African. I think. Let's be honest: Mzi is delighted by literally everything Courtney does.

There is an Olympic challenge, I think...between the guests and the crew; Kyle is far too happy to slip into a little red Baywatch one-piece with an obscene back AND front. It's so adorable and so is his face when he puts it on.

We have the Addams Family vs Team Home, go guests! Following rousing rounds of Round The Bow and Tramp Stampede, Eggs Sunny Slide Up and Wrestle My Noodle, The Addams Family is victorious and the crew is back to work.

Captain Sandy watches Kyle go down the slide with Frank hand in hand and ushers her wayward second steward back to work.

Storm is relaxed and completely in charge of what he's doing, it's wonderful to see. He's joking around with Mzi and Courtney (Jason sits glumly nearby), he's the master of his domain and he loves it. After a long late afternoon putting away water toys, Storm sends Jason for a 15 minute break at 7:17 pm.

Kyle is tying himself in knots over this budding romance with Frank; Captain Sandy would 100% not be supportive at all of any line crossing but Kyle doesn't know if he should go for it. This could be a one in a million charter!

Or person. How often do you meet someone you connect with that quickly? Maybe he should tell Frank he's not allowed to hang out, really, and see if Frank can wait.

Dave is making a pink version of the Black Pearl boat made out of cake because sure! Captain Sandy is blown away; she is SO EXCITED.

All day Tasha's boyfriend has been texting and texting, even though he knows she's working and busy and the guests are awake and presumably needing stuff.

Jason takes a 45 minute break instead of 15 so Storm is livid but he also told Jason to have a shower and eat something; Jason and I don't know how you would do that in 15. Jason's sent to help Nat do decor while Kyle flirts with Frank.

Jason comes out on deck with Courtney and Mzi are shittalking about him, does he hear? We don't know. I mean, he's aware that he's not connecting with everyone else, which is unfortunate. We essentially have a built-in clique with Mzi, his lifelong bestie Storm and his massive crush Courtney. Where does a laconic American fit in?

Dave brings out the Pink Pearl for the guests, Primary Adam is not even half as excited as Captain Sandy was.

Nat and Storm are on lates, they cuddle in the crew mess and she tells us about her trust issues. Her longest relationship was seven weeks. Um, sweetie, that's not a relationship, that's not even enough time to get tested.

Jason shows up late for anchor watch; Storm adds that to his list of Jason disappointments. He's going to have to start managing that a little more actively, methinks.

Kyle is working lates on service, which means he spends his time making drinks for Frank and I'm rooting for these two!! Frank is so open, I love it, it's making Kyle open up and I have such hopes for them. So do the rest of the guests, they're watching closely.

Frank just lost 85 pounds? He's 38 and his skin must have snapped right back, good job! He's super shy, too, good thing Kyle is so outgoing.

Omigod the morning sunrise shows us the most beautiful area imaginable in Malta. Below Deck and Below Deck Med are 100% travelp*rn.

The next morning Tasha is dealing with a jealous boyfriend dealing with being at a distance from her and with her working with the guy she cheated on him with. So it's going great!

It's the last day of charter, time to head for docking!

GUESS WHO EXCHANGED NUMBERS AND ARE MEETING UP TONIGHT ON A CREW NIGHT OUT????? I am so happy for Kyle and Frank!! They just have that connection and it's AWESOME.

And! Frank made the move, not Kyle! So he wasn't too shy woooooo!

More problems on deck with Jason, is Storm being unreasonable or is it Jason with the attitude?

Courtney is terrified going into the docking, the width between the dolphins is just so narrow. It is just ridiculous, Storm and Mzi aren't any calmer but they've been stressed out about it the whole time.

Lines are thrown, it's done, it was a great docking!

Time for guest departure, awww! Frank wants to kiss Kyle, he says they will later! I love Primary Adam's goodbye speech, we all tear up because it was really heartfelt and I hate it when trash makes me cry!

Time to flip the boat! And wait for that Tip Meeting call...wooooo and it's time! I haven't been consistent enough in my watching to guess so I will just wait!

After all that excitement, we're back washing a boat with Courtney...rapping? Rapping about twerking? Did nobody learn anything after Iggy Azalea?? Jason isn't completing his work and apparently that's all we're going to focus on this episode FINE.

Dave and Tasha seem to have come to an agreement to be civil and friendly; they have a chat on deck and they make up properly, yay! They really are both lovely people, I'm glad they found their way through.

Time for a night out, Kyle threatens the crew: if they make him late for his man, they're dead!

Dave makes the wise choice to not drink this night, he's getting along so well with Tasha we all know that would be a bad scene.

There's always a party cab and a quiet cab; Nat, Courtney and Mzi are raking it up in the one while Jason and Storm sit in the other and quietly check their own phones.

The team meets up with the recently departed charter guests, Frank and Kyle and ridiculously adorable. Awww Storm and Nat leave early for cuddling, I love that too! Storm likes Nat so much because she's feisty, she gives it right back to him and he digs that!

Frank and Kyle decide to wait for their first kiss for their first real date, awwww! I mean, that's so cute!! It's also almost impossible for them, no way this will last hahaha.

And it doesn't, as they're leaving Kyle shouts out that he loves Frank and they rush out and meet in the middle of the road and kiss for a solid minute.