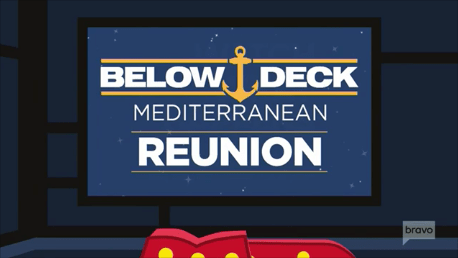 Did you know there was a Below Deck Mediterranean reunion? ME EITHER! I'm so late but I'm still 'cited, reunion shows are either awesome or shite, let's see where Below Deck Med came in!

The first question is a soft lob over the plate: is Captain Sandy a real micromanager? Nahhh

And we're into Bobby fighting with Lauren, boooo! Don't curr, but we got a bit more information. Bobby has been dipping in the groupie pool, that was the other two women on his and Lauren's date. He starts screaming about text messages as we move into Lauren leaving with Ben Robinson from a party.

I mebbe fast-forwarded that part.

Adam's on the chopping block now for his onion attacks, he blames it on everybody but himself. I love how Captain Sandy was completely horrified by Adam's behaviour day in and day out, picking on all the stews and daring to blame it on being heartbroken. Nobody fucking buys that.

Hannah gets called on the carpet for her guest-snogging but somehow Bugsy ends up defending her decision to tell Bobby and not Captain Sandy because another viewer thought that was weird too. Hannah snipes and yes, Bugsy compromised her privacy but it's Hannah that ends up looking bad as Bugsy doesn't back down an inch. She didn't mean any harm, she thought it was funny and then it just wasn't.

Hannah says she never trusted Bugsy after she read that Bugsy had studied acting, but Bugsy isn't taking that either. She's been a yachtie for four years, she wasn't in it just for the fame.

We're at Malia / Adam / Wes finally! I like Wes better and better every time he opens his mouth, he doesn't hold anything against Malia and he's seen everything. PLUS: Adam and Malia never had sex, all they did was kiss, so Adam's asshole move in telling Wes he and Malia had "a physical relationship" meant exactly nothing. What a c-word.

Andy Cohen keeps bringing up that Adam told Malia he loved her right away, that's because his dad knew the first time he saw Adam's mom that he loved her. NO PRESSURE. Whatever, man, I'm sure it happens but it's not the usual and that's pretty heavy to dump on a girl Day Four you psychotic bastage.

After some "We Want Some Privacy!!" bullshite, Wes and Malia are totally a couple, yay! She's going to meet his family!

Hannah plus Bobby: kissing (Hannah's like I used to be while schtipsy, she has a Kissy Phase!)

Bobby plus Bugsy: kissing, which she confusingly refers to as "a brother from another mother". You can see exactly when Hannah decides to make a comment:

Nobody else admits to anything and then we're into The Slut-Shaming of Malia by Adam. Surprisingly, she sticks up for him and HONESTLY.

Let's talk about Malia's promotion! Lots of swearing later, Captain Sandy sticks up for Wes's choice of Malia for Lead Deckhand but max has some stuff to say about that. It's all good, Malia's super chill vibe is keeping everyone calm.

Our final fight of the season is Hannah versus Bugsy and damnit, nobody will step up and say who the best chief stew is. We all know it's Bugsy, come on. Not that Hannah doesn't have her own way, but Bugsy was 100% the better, more professional chief stew with excellent customer service this whole season. Lauren calls their styles different but equal, saying she's a people pleasing team player and I think what she meant was a BACKSTABBING HO. But she was talking pretty fast and has a slight accent, so I may have heard wrong.

A viewer complains about Bugsy complaining about Hannah, who would want to hire someone with such a bad attitude? Bugsy isn't about to let anyone shittalk her and claps back clearly that any negativity was contained to interviews and never entered the workspace. Hannah gets a little jab in but really: she has no game. WHAT HAPPENED TO HANNAH FROM LAST SEASON?? She seems only half there!

Andy can't resist giving Adam another run through the wringer: does he still love Malia? Nope, time's up. For the love of

Once more around the table for our gang, does anyone have any regrets? Malia would have made her decision sooner (duh), and Bugsy would have explained her frustration sooner (Hannah's almost-sneer and deadpan stare in return was AWESOME) and that is it! Okay, Max woulda come up on the bridge once or twice more and we're oot!

I hope Hannah steps out of her slump, Bobby is wrapping it with his groupies, Max and Emily are happy, Malia and Wes get married and have extremely attractive babies years and years from now and that Captain Sandy keeps representing for the Big V Asea.

So was it awesome or shite? Imma give it a solid 5 on the MehMeter, I dug how chill Malia was but Andy repeatedly trying to stir the pot with Adam and his lurve for Malia was ehhhh.

Take care, yachties! Until Below Deck next month, woo hoo!