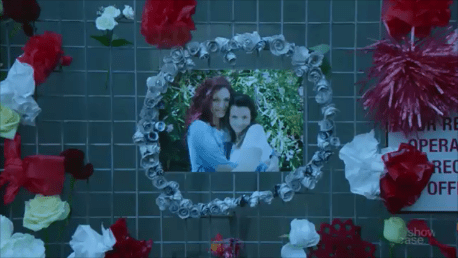 So. I couldn't make up my mind about whether to carry on with Wentworth Prison after the end of season 4

Because for me: Danielle Cormack as Bea Smith started and ended everything for me. After a bunch of months of wishywashiness, I find myself alone in a hotel room two provinces over with S5:E01 staring me in the face. I'll give it a go.

First we have to cry a lot about Bea being gone, every single person we know in prison walking up and bawling while tying something to the fence in Bea's honour. Governor Vera Bennett (Kate Atkinson), former Deputy Governor Will Jackson (Robbie Magasiva) and Franky Doyle attend the actual funeral service out in the real world, Will even getting his job back because as Vera says: now is the time to pull together.

Oh Bea's tombstone. It's next to her daughter Debbie's (who was murdered in season one by another inmate's son) and it says "to the moon and back."

Franky sums it up for everyone

Speaking of The Freak! Joan's lawyer doesn't think much of Joan Ferguson's defense of "she wanted me to kill her!!" (true) plus conspiracy theory (also true), those are both super hard sells to the jury.

And then we're in Vera's office while her walking Sexual Harassment Case CO Jake Stewart (Bernard Curry), who's as dismayed as we are that The Freak, aka Joan Ferguson (Pamela Rabe) won't be moved to another prison to await trial for murdering Bea AND she's got back into General Population.

Of course, the difference is that Jake's upset because he went on a murdery rampage for Joan so she would pay off his drub debts and with her staying in that prison: she has something huge over him. Plus she's capable of anything, as long as she can talk: she's a danger.

I also don't agree that Bea was murdered by Ferguson, she committed suicide using Ferguson as a scapegoat.

There's screaming over in HBlock, Maxine Conway (Socratis Otto) is there blocking a new guard and CO Linda Miles (Jacqueline Brennan) from clearing out Bea's cell. They just need more time! Boomer (Katrina Milosevic) is worried about Maxine's health (she's recovering from breast cancer and chemo and may have knocked Boomer up via hot dog syringe. It's complicated), Liz (Celia Ireland) asks if they can just keep the room the same until Allie gets back, how about that? Sonia Stevens (Sigrid Thornton) seconds that emotion and we're past detente.

Franky's doing great at her new job as a paralegal, being offered a job and everything. She runs out for some lunch and runs into the guy whose face she burned horribly while on a reality TV cooking show. He wants to have a cuppa, but that's against her parole...she caves and sits with him.

Mike (Felix Williamson) wants to talk things over, how he grew from the experience, but I'm starting to get worried that Franky is in trouble. He laughed slightly snidely when she said the kite pendant she wears around her neck symbolised freedom. Girl: you in danger. He knows it's a condition of your parole to be nowhere near him. Is he truly over her horrific attack?

Joan gets in a few licks against Vera while Jake is taking her to the Governor's office: "you'd be amazed what a seemingly respectable corrections officer will do, given the right incentive." Soooo true. She tells him to investigate Vera, she must know something.

Well, we saw earlier that Vera knows EVERYTHING, having found the phone Bea was supposed to be using to tape record Ferguson in Bea's room along with a screwdriver-shaped hole in the wall.

Some verbal jousting in the Governor's office between Vera and Ferguson, come ON!! Honestly. Same samey same same. Vera makes Fergs sign a statement refusing protection, she'll be placed in H5 in the morning.

But she's as wary as I was when Franky brings up Mike Pennini from the reality show, we're both worried he means revenge. But Franky feels free, which makes Gidget and I SURE Franky's about to be carted off.

In a super gross twist of fate, Allie and Joan enter the General Population at the same time, Allie all healed from Joan's attack and Joan not "taking the teal" as she doesn't think she'll be there long.

Kaz Proctor (Tammy McIntosh) is among those happy to see Allie back, she drops the bomb about Ferguson being back in Gen Pop but she will never ever let The Freak near her, which means the exact opposite, I am immediately positive.

Franky finds out very clearly that bygones and not bygones, if they ever were. Mike calls her cell phone, he'd like to meet again. She asks him not to contact her again, but outside is an envelope of pictures of her and Bridget playing grab-ass in front of their large bay window.

Joan's brought in for work duty in the laundry room, just as the guards go for a smoke. CO Miles is really the worst guard ever, but at least we found out the new guard's name! It's Brenda (Not Listed in IMDb) and they won't be watching whatever Top Dog Kaz has in store for Ferguson.

It probably would help if Kaz didn't look so terrified while she's trying to intimidate Ferguson.

Kaz isn't doing the usual hand-burny punishment or beating or (WE'RE NOT TALKING ABOUT GANGING) anything, she's giving Ferguson the silent treatment. She's a ghost. Nobody is to talk to Ferguson, sit with her, acknowledge her in any way. It's genius, really.

We're out in the yard now, let's see how long it takes before Ferguson is totally not a ghost? About 11 seconds, when Allie charges her with a ball in a sock. She's still weak from the attack, so she gets handily tossed aside by The Freak and now we've got everyone out in the yard gunning for a piece of her.

She beats the shit out of every single comer, including breaking someone's arm and almost killing Allie on her third run.

Vera thinks this is time to force Joan into The Slot, but Brenda above is Office Murphy (Katerina Kotsonis) and she backs up Ferguson's assertion that she was only defending herself. Ferguson totally was defending herself!

So Maxie has some news...

Boomer barricades herself in her cell when she hears that Maxine is being transferred to Barnhurst, screw Maxie's treatment, she wants Maxine with her! Everyone who loves her leaves. Ah Booms. It's Sonia who talks Boomer down, she'll only be there for another month so Liz better get cracking on that confession, instead of just having Sonia order her around like a servant.

While Vera does some Nancy Drewing on the side. She talks to Allie, who is all about ratting Ferguson out for the hotshot that almost killed her and then looks up who was on shift when Allie was attacked. Hey boytoy Jake. He says he switched with Brenda to meet with the realtor for his microbrewery (we all snort-laughed then, right?), totally not so he could go shoot and blow up Ferguson's former henchman Nils Jesper, nuh uh.

Ohhh, disguy is a problem

He confronts her at work at it gets physical, she REALLY needs to tell someone. It's starting to affect her work and this guy is a blue-ribbon-grade stalker.

Instead of telling anyone, she chooses to go to his house to talk, where he attacks her with a blowtorch and a neighbour sees her driving off in a hurry. I am afeared Franky's days of freedom are numbered.

So Vera found her scapegoat as suggested by her boytoy Jake Stewart, Brenda will be taking the fall for Vera AND Jake, fanks very much, Brenda. Off you go.

Vera assigns Jake to watch over Ferguson again and for once, Jake actually gets something over our cunning strategist. He tells her Vera had nothing to do with letting Bea Smith out (while we watch Vera destroy evidence) where Ferguson was, so sorry. Ferguson's face after was allllmost worth all the lead up.

Franky is finally about to tell her boss about what's going on and instead: she's arrested for Mike Pennini's murder. Yay, he's dead! Oh. Booooo Franky's going back to prison! I'm wondering if Bridget will go down too, damnit, well, I mean get it trouble. And we're out.

I'm glad I took a few months off because I was very attached to Bea. VERY ATTACHED. She was Wentworth to me and I just couldn't see any reason in going on as Joan Ferguson had become a caricature of herself and Vera, well, do NOT get me started on ineffectual Vera of All The Bad Choices and False Bravado.

I was wrong, there is life in Wentworth Prison after Bea's death and as sad as I am to see Franky heading back to prison, at least it made sense. I can absolutely see the man whose life she affected so greatly being very interested in bringing her down, that I can see. I wish I'd started a bit earlier, but at least I have a whole season's worth of episodes to get caught up on now. Cheers, you lot!