Woo hoo, it's time for OG Below Deck you guys! Who's excited??!! No more amateur hour asea, we have our hardy crew of yachties rolling with our homies, let's meet some new people who will make unfortunate decisions while intoxicated and on camera for our amusement! Rolling S5:E01 The 1 Percenters after the break.

Our beloved chief stew Kate Chastain is back, did you know she wrote a book? Lucky Charming!

And deckhand Nico Scholly, who lost a brother last year...but hashtagged his RIP tweet with #BelowDeck, so

Lots of new peeps too, starting with Jennifer Howell, who we should call Lovey, yes? She has a teeny tiny baby voice and I'm already wincing, so maybe not. 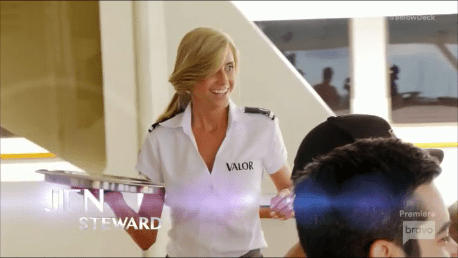 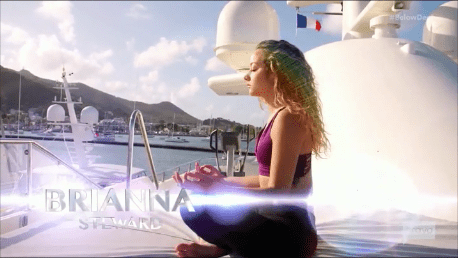 Bruno Duarte of the rockhard abs 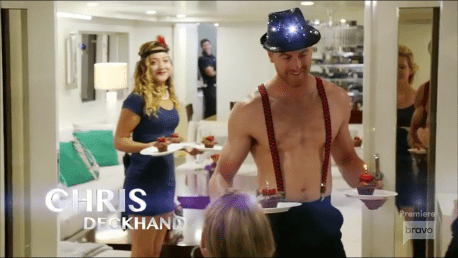 and finally hot chef Matt Burns who is adorable until he opens his mouth and starts talking in promo about licking someone's "balloon knot." You know what they say about those that talk about it all the time..they get cows for free or that dog won't bark. I'm super terrible at animal metaphors. 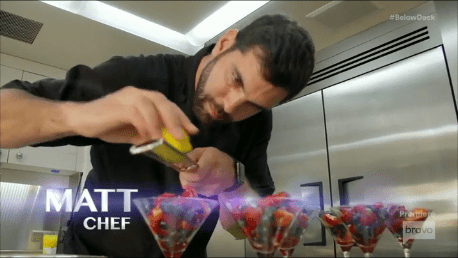 Kate is digging yachting part time, it's more like a recurring fling than a boring old long term relationship. She arrives first on Valor to meet Captain Lee, who calls her kiddo again and stares at how much lighter her hair looks in interview than on the ship. He's got good news and bad news; they're back on Valor so Kate knows where everything is, but all the good crew is gone and she'll have to make do.

But. But. KATE is there and she's the best!

Chef Matt Burns is next aship, he's Canadian! And adorable. And hella tall, he must be 6' 3" at least. Yay adorable Canadian chefs! Kate calls Canada a G-rated country and she's not ascared.

I BEG YOUR PARDON!

Brianna's our hippie dippie below deck, that yoga mat is not just for show! 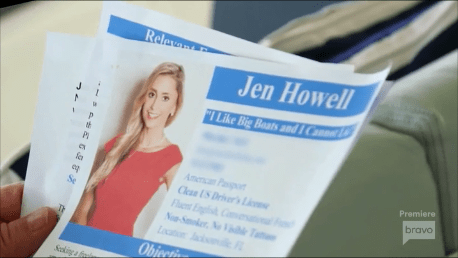 Bruno sets up in the wrong cabin because he knows not his fore from his aft (me neither) but at least he carries his luggage on the boat. Jen uses her teeny tiny baby voice to ask big strong Matt to do that for her.

Dude. She looks like Rachel Drach in a Harlow wig! 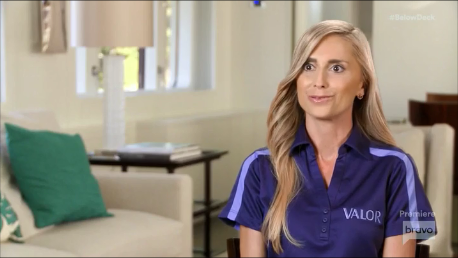 She has an eight year old daughter which they tell us right after we find out she and her foobies think being on a boat is like an orgasm. Um. That's a lot of information at once and now I feel uncomfortable making fun of you because you're a mother. WELL PLAYED, FOOBIES.

Kate finds Bruno in the wrong cabin and sends him away, there's a lead deckhand coming! And by that she means Nico, not He Who Must Not Be Named from last season, yay! He's had some challenges at home, so he's back. Huh. Captain Lee is running without a bosun (Eddie must be still in so much troubbbblllle) so Nico is in charge, but NOT a bosun. Sounds legit.

Montage: Chris Brown arrives and demonstrates his name by making punching motions in the air (just...don't), Nico and Brianna shared a cab once and Chris Brown is STILL introducing himself with two names.

I once had a friend named James Brown, if you didn't believe his Canadian drawl, he's take his wallet outta his boot and show ya! He was always drunk, always in boots and walking truth that rednecks are everywhere.

Baker arrives and everyone gets to work, Matt has to call Kate in to kill a cockroach in the kitchen because he's a baby. I'm with you, Matt, and it's not because we're Canadian, Kate, it's because we've trained our children to be spider hit-squads since they were babies. What, just me? Pfft

Stewardess and deckhand meetings tell Kate everything she afeared was true: nobody knows how to do anything, they're just here for the extra large tips. The deckhands are even worse and I get why they hired pretty Bruno, but maybe not Chris Brown, you know? I always liked 'em big and I mostly dig facial hair but his ginger scrub and missing side tooth are giving me hives.

He was a celibate Christian for the first 26 years of his life, he's here to make up for lost time. It's rare that I find someone so immediately repulsive, but I think it's not just looks but also his tendency to refer to himself in the third person by both his names.

Baker was a southern belle, debuted and everythang! But then she evolved, bought a massive Class A RV and goes to Burning Man now.

Everyone questions each other in pairs, someone better break out two truths and a lie soon or Imma feel gypped! Kate describes her last relationship as a brief mistake, I'd add regrettable in there just because of the jail time but that's just me.

Brianna watches Kate clean for a bit, hey, didja want me to go do the same in the other room? SURE!

Crew meeting! Captain Lee blah blah blahs on while Bruno stares at him: he looks like his grandpa! The gold jewelry, the attitude, just wait until he asks you if your tit is in a wringer! It's gonna be awesome!

By the way, Bruno should totally be inside stewing while Brianna could maybe be outside crewing, yes? He was a bartender and server on a cruise ship, he's made for that stuff! Is it only women who stew on yachts?

Kate can barely believe her ears, Matt wants to plan special meals for the guests IN ADVANCE, ON A MENU, and he's organized. Duh, Kate, we already said he was Canadian. We rock.

Kate explains to the stews how to fold toilet paper ends, for reals, that was a two minute scene, do the diamond, girls!

And we're at the crew mess for a pre-charter meeting. 6 people, no last names. BOOOOOOO

Or has to poop, I'm not sure which

Brianna and Jen switch bunks with two of the dudes so they can have more time to not comb their hair / carefully curl one side like it's 1998. Time for the guests to arrive!

Dave and gang seem nice, but he cracks a joke about Matt's lack of pants #ChefNoPants and is left to laugh all by himself in the corner...Captain Lee has no sense of humour.

Even when the green deckhands allow cushions to blow into the water and almost crash into deck: nothing! Not even a smile!

Matt, come over here, *huddle time* you're a big fancy chef, yes? Why are you serving Denny's chicken ceasar salad to these wealthy people who have to tell each other they're funny?

You're making us look bad, Matt, get out there and throw some kind of cephlopod on a plate for chrissake! You got this! *huddle over*

The deckhands mess with a boat suspended over the deck for a good 5 minutes, what is going on?? Captain Lee is more than happy to show everyone how to do things: ONCE.

The guests flyboat? Where they're in a segway that shoots them up in the air? Imma take a hard pass but purty Bruno is doing a great job keeping the guests happy. Why isn't he a stew again?

Oh Jen. Kate sends her to get the guest's drink orders and she mixes up a gin martini with a gin and tonic, THEN tells the irate-ish guest that it wasn't her mistake anyway, so whatevs. That's just. BAD SERVICE.

Matt serves up some steakhouse fare that the guests love as I fall asleep and Bruno tries to figure out why his legs hurt so much.

The guest are really trying to make NoPants a thing, it's just...not.

Nico and the Captain touch on the death of Nico's brother, he cries.

It's beach picnic time and Matt still hasn't had a meltdown yet. Has he read his contract? Everyone sets up while an exhausted Bruno wonders when all the pain is gonna stop. He just doesn't understand what they're trying to tell him, get thee inside, mister! Kate needs some experienced help.

We're out as the guests hit the beach!

So. We have some really green staff here, it just does not seem fair that they all share the same tip as Kate, ya know? I forgot that Nico was made lead deckhand last season, I don't really remember him standing out at all, except that our Aussie dug the cut of his jib. It's interesting to see Captain Lee again now that I've seen a completely different yachting style care of Captain Sandy Yawn. I liked her empowering style, let's see how Captain Lee does with his old-timey-isms and pounding nails up his bum for contrast. Until next time!