Welcome back to Below Deck where I've already written this twice and WordPress has EATEN IT. Rolling S5:E06 100 Feet From Catastrophe after the break because third time is the charm for weeks-old reality tv recaps!

We open back with lead deckhand Nico Scholly triumphantly explaining to new bosun EJ Jansen how a handbrake has to be disengaged prior to dropping anchor; EJ can't believe Nico didn't do this already. Nico's trying to make EJ look incompetent but just looks petty to me. EJ is wondering if he has to check ALL Nico's work?

Third Stew Jennifer Howell complains about working harder than every person ever in the history of working, it suck to be her because she is Laundry Cinderella.

Deckhand Bruno Duarte comes right out with it and asks EJ who he's supposed to listen to: him or Nico?

Meanwhile, Nico is directing deckhand Baker Manning to doublecheck EJ's work, honestly, Nico. Primary Charter Guest Bradley Summers comes to see Canadian chef Matt Burns about lunch; Mr. Burns supremely messed up dinner the night before so he has some ground to make up. He's going to start by apologizing with lobster for lunch.

Laundry Cinderella has caused both washing machines to overflow from the top and bottom, fellow stew Brianna Adekeye is pretty chill about it. She has more patience than Chief Stew Kate Chastain, who doesn't suffer fools gladly, nor does she enjoy sharing tips with a whiny newb who refuses to learn. Kate gives Jen a laundry soap tutorial while we all sigh.

We're in St. Barths in high season! Do people still go there? Typically if I've heard of it, it's already over.

Deckhand Chris Brown asks Kate for advice: should he move from the crew mess to the bilge? Kate tells him to make that bilge his own, but we all know it's not going to be for long.

Baker is being directed thisaway and thataway, she just wants to work you guys! She's got a great attitude but needs clear direction, dudes.

Matt promised lobster, but doesn't HAVE lobster, so asks Captain Lee Rosbach if someone can go grab some in the tender while Kate rolls her eyes at his lack of preparation. He gets lobsters and does some terrible, terrible things to them to rave reviews from the guests.

Primary Bradley and gang play in the water all afternoon and tell Kate they want a Caribbean tasting menu for supper, sure! Kate and I are worried Matt is gonna mess this up so she explains to him very clearly that Sober Guests + an extra crew member = probably smaller tip, so turn it oot, Burnsy!

Matt's got his game face on, COME AT ME BRUHS!

Captain Lee catches Bruno shirtless out in the dark on deck and flips his skinny Kenny Rogers lid. What if a guest was out there wandering around? Bruno wrings out his shirt and puts it back on and I have to mention how different he looks now. Don't get me wrong, Bruno is still super adorable, but he's gained about a billionty pounds in muscle since he was on Below Deck.

EJ and Nico butt heads (over salty windows. For real) and Jen gets a whole ten minutes to call her daughter. Surely she could figure out how to do her hair and call her daughter at the same time? Never mind, I'm not gonna hairshame, you talk as long as you want, Mama. Being apart from my littles is the hardest thing I have ever done.

Matt is super excited about his tasting menu and the guests rave over it. Kate can't understand where disguy has been?

Casino Theme Night! Kate brings Chris in as a croupier because she feels sorry for him, he thinks his charm will pull him through.

Nico and EJ are called to the bridge to give their opinions of the deck crew, I'm surprised Bruno is brought up negatively for that one time being on deck without his shirt on. Really?

Matt retires to bed, triumphant and wanting to share it with his ex-girlfriend Samantha. I can't tell if she picks up, but I will tell you this is probably not the first repentant phone call she's gotten after a drinking binge.

It's the last day of charter, which means it's almost Tip Time!! The guests are exiting in super fancy fashion, a helicopter is picking them up!

The crew is all drooling over a nearby superyacht: The Maltese Falcon 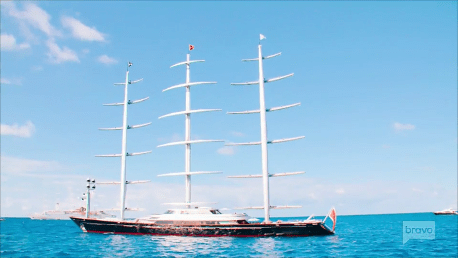 Did I say nearby? I mean RIGHT THERE. Captain Lee is starting to freak out and Kate's noticed it in even in the galley.

Nico cut the tender loose, but didn't take the keys...now I'm wracking my brain: didn't he take the guests for a picnic then not make sure he had keys last season? I'll have to research.

At any rate, it's a massive mistake that everyone on both yachts gets to enjoy as Nico and EJ look like they aren't sure which side is up out on the water. They seriously looked like amateurs out there and since Nico was at fault, Captain Lee isn't about to get rid of EJ any time soon.

Since both of his leads are off the boat, the Captain has to direct Baker on anchor duties. She keeps messing up because she is sooooooo nervous and he is soooooooo angry at his crew.

The only one who is happy is Chris Brown because he is SURE he didn't do anything wrong this time.

Guest leaving time! The Captain can't remember the guest names so Kate reminds him as Bradley hands over a fat, fat envelope. That has to be 20k! This is not going to be a happy sharing, it's all Come to Jeebus later.

Wow, it was $21,000, which means $1,750 each and while we all try to do the math in our heads as to how much the split would have been, Captain Lee tells the deck crew they can party carefully. Baker makes the mistake of speaking while the Great Man is holding forth and gets smacked back in line; it's funny how treating adults like children makes them act like children.

Now we're at the Come to Jeebus meeting with the deck crew and Chris is fired for his inexperience. We all knew that was coming, but as Kate say: it's not as though he lied about knowing anything. He just wasn't a self-starter is all, and complaining about a hangover then hiding in your bunk is never a good look. You can be inexperienced and still enthusiastic, dude. See also: Melia

EJ has handled Nico with kid gloves long enough, he takes Nico aside after the meeting to tell him that whatever he says goes. Nico refuses to accept his authority, everything was awesome before and will be again!

*which is why the Captain had to bring in someone*

Jen spends a lot of time complaining about how much work she does, yes? Do you think she was cast for her facial expressions and then was railroaded into this maid job and just doesn't get it? Brianna finds her in the kitchen and offers to help, to be handed over the entire job Jen was "working on." To her credit, Brianna calls her on it: what are you going to do if I am doing your whole job? She figures she and Jen do about the same amount of work, she just talks about it less.

It's time for the crew to party in St. Barths! Woo hoo! Matt isn't drinking, he's busy texting his ex-gf, still can't tell if she's answering yet. Someone asks EJ for his story, he is TOTALLY Canadian, woo hoo! I've got two representatives aship and THEY BETTER REPRESENT.

Jen's a drink in, so she's slurring "voulez vous couchez avec moi ce soir?" in Nico's direction, which pisses off Briana and all Patti Labelle fans. She has to explain what it means, so it goes from bad middle-school flirting to just...sad. Nico's all ehhhhh and Brianna actually showed emotion for once, whut?

Kate jokes about her crew but Jen is half in the bag and takes it all very personally. Bri is OVER it.

The gang breaks up into smaller groups and wanders around St. Barths, EJ, Nico and Brianna dance and this is gonna get ugggly. Jen refuses to have fun.

Nico is tipsy and the flirting is starting to cross lines, but a late-breaking fight with EJ re-focuses everything.

So I don't know! I can't tell if EJ or Nico is in the right; I want to support Nico because this is our second year together but the Captain wouldn't have brought EJ in if Nico was doing what he was supposed to, yes? Either way, Nico and Brianna are headed for trouble, no way this will be okay with Melissa, the girlfriend back home. Cheers, everyone, Merry Christmas and until next time!