Good morning everyone, it's time for some Top Chef before Christmas! Yay!! Who's ready? ME TOO. Rolling S15:E03 Keep On Truckin' after the break! With this guy: Logan Paul.

We open listening to the cheftestants Monday-morning-quarterback the last elimination, Adrienne Cheatham felt as though departing chef Claudette Zepeda-Wilkins threw her under the bus when leaving. If Adrienne says she's not here to make friends, we'll be halfway to Reality Show Bingo!

Winning chef Carrie Baird is ecstatic to have redeemed herself, now the other chefs will take her "serious."

Laura Cole calls her son Oliver for a little emotional support, he's the one that encouraged her to do Top Chef and she's never ever been away from him this long in his whole life. It's so hard to not have littles around, I couldn't understand more, Laura. 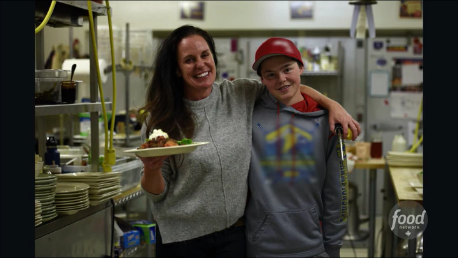 Padma Lakshmi welcomes us in the kitchen, she has Top Chef Master Lachlan MacKinnon-Patterson with her to 'splain the Quickfire Challenge for this week.

Ah but this isn't just a regular Quickfire, this is a Sudden Death and it's on the perfect Denver omelet!

Brown Sugar Kitchen owner/chef Tanya Holland is making crepes (...?) while Adrienne takes a minute to bolster Laura's spirit. Laura's heart and mind are in Alaska and she hasn't even decided what she's making today.

Rogelio Garcia is making Eggs in a Hole (Toad, right?) one of my favourites ever! YUM. Tu David Phu is going with an egg terrine, he loves eggs! Me too! His looks the most interesting so far. Carrie is boring me with her breakfast sandwich, but I can't really say anything since I just about floofed over eggs in a hole.

Also: not a word.

Laura has decided on savoury French Toast at the last minute as Tanya realises her crepe-making abilities are back with her mises - in France.

I will be so disappoint if we lose one of our awesome mature lady chefs. Make of that what you will.

Brother goes Japanese, as he just went to Japan and Bruce does gnocchi, AGAIN. Every time he says "bear" my teeth go right on edge all by themselves.

The favourite dishes were Carrie's, Brother's and Tu (course), and it's Brother who gets the immunity. Yay! It was lovely, I just would have like Tu to get that one because his dish looked amazing. The only thing is that Tu doesn't seem to be a great loser, you know?

HEY WHERE ARE CHRIS'S DAREDEVIL EGGS??? I can't recall them ever leaving out a dish before, I actually rewatched to make sure and nope: not in there. What gives, Bravo??

In the bottom are Tanya, Laura and Rogelio, no surprises at all. They move into the Sudden Death part of the Quickfire and Tom Colicchio shows up to introduce. They're doing a classic French omelet, which sounds simple, but...

For one thing, there are no pans. Tanya lucked out and grabbed the last two, everyone else is in sauciers and I don't like their odds. I'm learning all about French omelets from Brother Luck, and this is what Culinary school will teach you. A French omelet is not stuffed (as everyone loads theirs up) and it's all about temperature control for an even, non-browned exterior. Brother tells us it's "risque" to fill the omelets, which is why those guys cook the omelets and I write about it.

Tanya is struggling, awww man. Oh but it's much worse for Laura.

Alas poor Laura, she's mortified and crying. Fatima Ali is dismayed by Laura's falling apart, she considers Laura to be a giant in the industry: twice nominated for James Beard awards.

Tasting doesn't get any better. 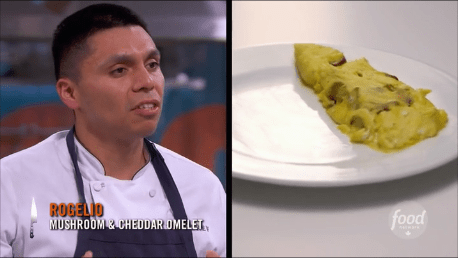 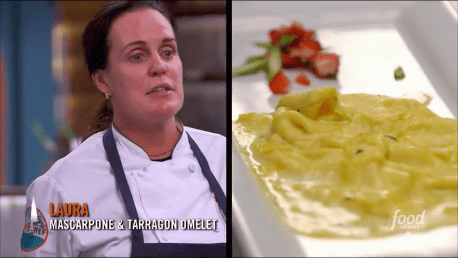 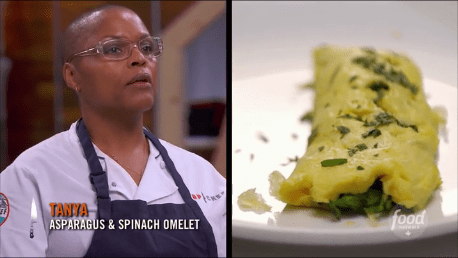 Tom asks "why stuff" and laughs when told that's what all the chefs think is a classic French omelet, I'd bring out his skeptical face from last week but I'm still upset because no way we aren't losing Laura. And we do, she is sent home, embarrassed and we all cry a little bit.

Now it's time for the Elimination Challenge, former cheftestant Hosea Rosenberg will be helping judge this crop. 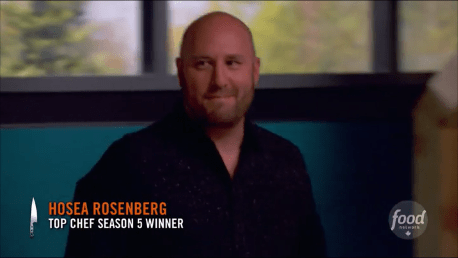 It's all about the food trucks with Hosea, he has an empire!

Four teams will compete to win the hearts and stomachs of 150 college kids and social media influencer Logan Paul will be bringing in the peeps. Who dat? I dunno, but Padma says he has 11million followers, so I'm sure he'll be "interesting". I won't look him up in advance because I prefer to be annoyed in the moment.

The chefs are split up thusly:

Green Team: Brother, Rogelio and Bruce will be providing a Foodgasm

Blue Team: Adrienne, Chris and Tu are doing sammiches, referencing one of my favourite movies of all time! Blazing Sammies!

Black Team: Carrie, Joe Flamm and Tanya will be representing Down the Chin, which makes Tanya and I do this.

It's time to shop at Whole Foods with one thousand dollars, hunty!

Bruce walks us down memory lane (a Bravo trademark), showing us some pics of him in a hair band. He thinks it's hilarious that as a chef, his band's biggest gig was opening up for...wait for it...Meatloaf.

We even see a little Brother Luck background! He was a youth at risk and turned things around when a classmate got a partial scholarship for cooking. Brother got TWO scholarships!

I'm reading Ghettoside by Jill Leovy; that lifestyle is something I can't possibly understand but that I wholeheartedly empathise with. I grew up in small, poor towns and while there were no gangs (hence my not pretending to know), there was rampant poverty and crime.

Sasto III thinks he has a special trick for chicken wings; when he blanches them he adds baking soda to the liquid to affect the surface of the meat. That's something Cook's Illustrated does with almost every one of its proteins and the main reason I didn't renew my subscription.

The chefs are fighting with mechanical issues constantly, especially in the Green Team's truck. It's almost as though trying to fit a whole commercial kitchen into a van is tricky.

And suddenly, it's time! Logan Paul appears, carrying a camera on a stick and followed by a hundred and fifty college students. He's pretty much what I expected.

Gail Simmons shows up as well and they head to Fatima's truck, which has a huge lineup and the judges watching as she sloooooowly scoops whipped cream. I admire her composure but knock it out, sister! Okay, it's the others that are slowing her down.

Seriously, Logan has done something to my eyes, all he has to do is open his mouth and they start rolling. I can see how someone closer to his age would find him charming?

The Blue Team and their matching bread for continuity do not go over well. I'm hearing a lot of "too many carbs" and dry fish. Only Adrienne's sandwich is getting any positive reviews.

And finally the Green Team, who do not fare well, even with Brother working the crowd like a carnival huckster.

Gail calls the honey powder in the dessert "cute but useless", which Logan repeats immediately: like him! Nobody knows where to look but Tom starts to laugh, which is just awkward because Tom is very obviously not laughing WITH Logan. Logan is excused.

To be clear: I don't think Tom was being mean, it was just such an odd comment given how seriously the judges take their work. And the massive age gap.

The team that lured the most students was: Down The Chin!

And the winning team is: The Hangover Cure! Sasto wins for his baking soda wings, good job III.

So it's down to the Blue and Green teams to lose somebody tonight. As mentioned, there was nothing redeeming from the Green Team at all but the judges were baffled by the sandwich truck using all the same bread. They did it to promote continuity, but the judges unanimously saw that as a very bad decision.

I'm concerned that Chris is bearing the brunt of the blame for the sandwich truck fail; he's up against Rogelio of the salad at two temperatures. It's Rogelio who goes home, I'm sorry, fella. All the best and I hope we hear a whole lot more about you!

Cheers, everyone, until next time! Merry Christmas!!