Ahoy yachties, who's ready to meet a new gang of charter guests and probably not even get to see the tip? Me too!! Rolling Below Deck S5:E5 Cool Beans after the break.

It's 27 hours until charter, y'all! Deckhand Chris Brown is hungover again and can't stop talking about it. It's like he doesn't even understand the most important thing about a hangover is to pretend you don't have a hangover! Just like pretending to be sober while completely schwacked. It's complicated.

He's barking up the wrong Lead Deckhand. Nico Scholly just wants Chris to shut up and work. Chris takes selfies instead and we switch to the galley, where Canadian chef Matt Burns is asking second stewardess Brianna Adekeye out on a date.

She hems and haws, he has to remind her that he asked her out the night before and she said yes. Jaysus wept.

Nico video-chats with his girlfriend Melissa and dodges questions about what he got up to the night before, coz what he almost did was Brianna. They're so gonna wreck his relationship with Melissa, you watch, I can't.

Captain Lee Rosbach is watching his inept deck crew and pondering any number of old-timey-isms that describe these yahoos. We ended last episode with the news that the deck crew is in for a shakeup, we all know it's Chris, right? Baker is slow on the uptake but a hard worker, Bruno is a hard worker and Chris, well, Chris drinks a lot and looks for napping spots. Nico complains about Chris to Captain Lee (seems hella bad form to me), who says that while Chris may appear to not care: he will.

Pre-Charter meeting before Matt and Brianna's date!! Bradley and Summer Smith of Smith Family Homes will be joining our intrepid crew asea; Bradley is a chef and nobody drinks. Chief Stew Kate Chastain is bummed but I'm excited to see what a dry cruise looks like! Melissa and Dan Sugulas round out our foursome (half as much as the ladies a while back) and will be celebrating their 10th anniversary aship with fireworks, peez.

Brianna asks Kate if she can go a boating date with Matt in front of Matt, I bet you ten bucks she was hoping Kate would say nah. Kate says sure, just work extra hard for right now and Bri now has TWO things to look forward to!

Kate is more mature than I and reminds Jennifer of the extra time she gets to call her daughter and do her hair and generally; let Kate manage her own people and keep fluffing towels, yachtie.

Matt is getting ready for his date by POUNDING brews. Seriously, I know you're tall and Canadian, but nobody can handle that much in the afternoon, especially since you might want to hold a conversation on your date. We all know nothing else is going to happen, unless you magically turn into Nico.

Matt tries to sober up while packing for their beach picnic. Kate has $50 on a preggers Bri. I will take that bet, Kate!

Matt has arranged to take Brianna to a beach. A nude beach.

Plus, earlier Matt talked about how his gorgeous ex-girlfriend and he broke up coz he just wasn't feeling it? There is no way that's what happened.

Charter Day!  A new young guy pulls up on the dock, Baker is polite as all get out but didn't know anything about getting a new Bosun.

This is EJ Jansen from Vancouver? Is that two Canadians? Nico doesn't care where EJ is from.

The Captain calls Nico up AFTER he already found out, he's pissssed. "Cool beans" says EJ. EJ says that a LOT.

Ahhh and Matt spills the cool beans, his ex broke up with him over his partying, which he wasn't willing to give up.

Nico takes EJ around to meet everyone. Chris gets stuck in the crew mess for sleeping. Um. That's totally not legal.

The crew all gossip about EJ; nobody knows who they answer to now! Hullo Smiths and Sungulas! Crew: you answer to THEM. 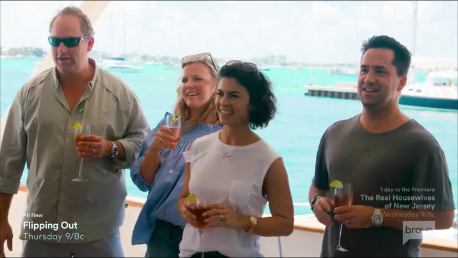 Boat tour time! We get a full minute video of the fancy toilet; Nico and EJ throw down while de-docking.

Primary Bradley takes a skip over the galley, this is a person who loves food. LOVES food. He doesn't like fancy food, just good food and I am slightly worried because Matt is so quiet. If you are a chef and are cooking for someone who calls themselves a foodie, you should probably not act like you hate them.

Bri asks Matt if he's quiet (and peeling vegetables with a chef's knife) because of their "excursion" but he says no. He's definitely reviewing his life choices in his head right now and while noble; this is not the time! He sends out yet another salad with a chicken breast on it, somewhere there's an Earl's missing a line cook.

We all hold our breath until Bradley says it's good, whew!

EJ doesn't understand what Nico's been teaching the crew for the past four weeks, Nico's too busy complaining about EJ being a walking "slap in the face" to do any training right now, EJ!

Supper time! This time it's scallops and risotto, oooh, it's like the Hell's Kitchen challenge! Spoiler alert: nobody can cook scallops or risotto while Gordon Ramsay is watching and in Matt's case; any time. The brussel sprouts risotto (I HAVE TO TRY THAT!! I LOVE BRUSSEL SPROUTS!) is undercooked and the one steak, medium, is very much well done. Booooo. Matt takes the feedback quietly, which makes Kate think he doesn't care, but now we have Bananas Foster to feed everyone, which doesn't have enough ice cream.

Hit the showers, big guy. You had a rough couple of days and you feel bad, but let's get some sleep then focus on the guests paying a hundred thousand dollars for your grub, yes?

The fireworks for the anniversary don't go exactly as planned, but they do fly free at the end, yay! And then the guests go to bed at 9:40 pm. Wow. Dry cruises are kinda quiet, hey? I am choosing to believe that they retired to their cabins to have mad passionate monkeysex, so.

I would be the most boring person ever on a cruise; up on that awesome gym at 6 am then reading on deck all day while having people hold umbrellas over me so I didn't sunburn.

Captain Lee is ready to hear what EJ thinks of the boat crew so far, "lazy-dasical" is not a word, EJ. He blames everything on Nico, we'll see.

Chris finds sleeping in the crew mess a challenge, it's almost as though they're trying to get rid of him without telling him. Allllmooooost.

Jen wakes up 5 minutes late for her shift and spends 20 MINUTES doing that hair while Matt makes coffee for the guests. You're late THEN you curl your hair and ask other people to make sure you curled ALL your hair? Gurl.

Captain Lee asks Nico about EJ; Nico shows just how young he is when he complains about sharing the tip with EJ. Clearly the Captain hired EJ for a reason, and Nico pretending he doesn't understand makes him look dumb.

Awwww, Matt finally fesses up, the comments about his food did hurt his feelings and with everything else going on, he's had a miserable couple of days.

EJ has the crew working hard, but Nico manages to find what looks like two mistakes EJ has made and can't resist crowing about it.

Now I know why the Captain likes EJ; he uses old-timey-isms incorrectly too!! We're out, but I see we finally see who gets fired next week!

Jk, no way it isn't Chris. He doesn't even have a BED. Until next time!