We go to Gilead again (from Fillory, if you know what that means!), where men are men and women are chattel and breedstock; let's find out what atrocities will be visited upon our ladies tonight in The Handmaid's Tale S1:E9 The Bridge.

It's time for Janine / Offwarren (Madeline Brewer) to hand over her baby for good now, all the Handmaids file in to watch.

Aunt Lydia (the brilliant Ann Dowd) watches from close by as Commander Putnam (Stephen Kunken from Billions, hmm, I wonder when that's back on..) and his wife Naomi (Ever Carradine with the most interesting face Ever) recite words they don't mean while gauging whether or not Janine is a runner.

Not to understate: this is incredibly difficult for Janine.

Putnam has to step in and encourage Janine to relinquish her offspring with lots of meaningful eye contact and "Go in grace" which is the Gilead version of "GTFO". The baby is not at all happy with the Putnams.

Janine walks out with her brave face on, ruined only by the sight of Offred/June (Elisabeth Moss) who she excitedly reminds about her affair with Commander Putnam.

Ohhhh, we'd forgotten that Janine thinks Putnam is coming for her and they'll be running away together with their baby Charlotte (not Angela).

Janine walks away and time stands still as June calls out to Aunt Lydia; the audacity of a Handmaid asking an Aunt about another Handmaid slowing existence itself until she replies that Janine is tougher than she looks. They could learn a lesson from her!

Isn't the Patriarchy the org that insists that women are only for bearing children, they're the only ones with bonds and their life exists solely to honour and nourish that bond, especially for their male children? How does that tie in with giving away your kiddos? I'd like to see the workshopping on that one:

P: okay, so we're having women bear children for the Church but how are they supposed to nourish that bond that only they have with their offspring if we make them give the babies away to more suitable parents? WHAT IF THEY WANT TO WORK?

R: calm down, Gary, we've got kitchens, too!

June snatches a moment to ask Alma (Nina Kiri) about Operation Mayday, what can she do to help? Alma shuts her down hard.

I adore the visuals of the Handmaids moving in unison, synchronized in coordinated inhumanity.

Janine is taken right from her baby to her new gig, welcome Commander Daniel and Mrs. Monroe, here's your new concubine! You must be superior! Your house is awfully far away from the Putnam residence, which worries Janine, but she can't really say that to Aunt Lydia, who shoos her towards her new rapists "like an open flower."

Serena Joy (Yvonne Strahovski) walks with baby Angela (Charlotte!) and Naomi, a woman comes up to coo at the baby and is backed up hard by an armed guard. I forgot how few children there are in Gilead and how valuable they are by extension.

Naomi goes back to complaining about "feral cat" Janine and the crying baby, Serena Joy gently suggests maybe she should try being more grateful because that's what I've always found works best for sleep deprivation.

Serena Joy wants a baby more than she wants to breathe, so watching an acquaintance complain about it is like being scratched with roofing nails. Tiny pricks everywhere but you don't feel right about screaming.

At shopping the next day, Ofglen 2.0 (Tattiawna Jones) waxes ecstatic about how lucky Janine is, with her swanky new digs and awesome Mistress. June and I stare at her for a full minute coz sure, all that cost was Janine's bodily autonomy and baby. "Lucky."

Alma grabs June outside by the wall, her assignment with Operation Mayday is to get back to Jezebels and grab a package from Rachel the bartender. TONIGHT.

June waits outside the Commander's office and makes her move, to be rebuffed firmly by Commander Waterford (Joseph Fiennes) before talking her way into his office and laying it on super thick. She just wanted to thank him for the excitement, that's all. *blinkety blink blink*

It works and he suggests later that evening, but I'm worried that he didn't buy it. His face is cold and unreadable after.

Nick (Max Minghella) drives them, of course, listening to June flirt and carry on as never before, his ears HAVE to be up. Waterford encourages June's taunting of his driver, "Nick just needs to chill." When June suggests going to the bar before the room, Nick's knows for sure something is up and warns the Commander when they get to Jezebels.

Serena Joy knits baby clothes by firelight, one of many she stores in a chest in her room. This woman wants a baby so very badly.

She heads downstairs to make herself some tea, rousing Martha Rita (Amanda Bruegel) who thought it was Waterford coming home hungry.

Shhhhhhhhh Rita, are you trying to get June killed??

Rita sees Serena Joy's face and suggests perhaps something a little stronger than chamomile tea? Ooh, even Rita gets a snort! Serena Joy gossips openly about ungrateful Naomi and her complaining; Rita agrees. You can lose a child in an instant; never not be grateful for the time you have. She lost her son at 19 in the war.

Janine is super tense for her first Ceremony with the Daniels, even with Mrs. Monroe's creepily upbeat folksy way. "Scooch over! Hey, we're in this together!"

I BEG YOUR PARDON

Oh man I can't even watch as Janine starts whimpering "no, no!!" and screaming for Daniel to get the fck off her and hiding in the corner.

June gets busted waiting for Waterford to bust, he doesn't seem to mind her stoicness but lets her know that she can be as loud as she wants to the next time: here, she can be free.

June takes a little while to digest that morsel.

She asks again about the bar....he knows why she wanted to come back here, to meet someone. He made arrangements.

He's had sex with Moira (Samira Wiley) too?? Oh thank jeebus, June's able to put the fake sex on the back burner.

Nick's been down checking in the kitchen with Beth (Kristen Gutoskie) who susses out his real interest right away and warns him against falling for a Handmaid. Too late, Beth, but I'll take your Spaghetti Carbonara recipe!

Moira is furious that June is trying to drag her back into the Resistance and putting herself in danger like this, she's just here to serve out her time! BUT MOIRA SAID SHE WOULD HELP JUNE FIND HANNAH!

So Moira better get her shit together and get ready to fight. The sound of the Commander showering has been the backdrop for this whole conversation, it ends and Moira leaves, but June isn't able to pull herself together. She cries wrenching sobs from her toes as Waterford, disgusted, directs her to pull herself together. Sexy playthings aren't so sexy when crying about their stolen children and lives.

It's a quiet ride home, Serena Joy waiting for her husband on the stairs to be put off until the next morning.

They don't sleep together?

June dreams of Luke (O-T Fagbenle) and Hannah (Jordanna Blake) on the beach until she's roughly awakened by Serena Joy: there's a problem with Janine.

Janine has stolen back her baby and is threatening both of their lives, standing on a bridge high above the water. She outs Putnam as having promised her a future (plus illicit beejs), so at least there will be some fallout for him from that. June is there to help Janine "see sense."

June literally tries to talk Janine off the ledge with the offer of a Ladies Night, karaoke even!

I AM NOT WATCHING HER KILL THAT BABY.

She begs June to come with her into the icy water, it can't hurt that much! But June can't, because of her daughter, and Janine has to do what is right for her daughter. Janine hands Charlotte to June and jumps, free at last.

Oh Janine. You were a little bit sweet and a whole lot brittle, you didn't deserve to go out like this.

Oh but she didn't, because she is fished out almost immediately by Eyes in boats and we last see her strapped to a hospital bed under Aunt Lydia's eye.

The lengths that this world will go to preserve a viable uterus is insane.

Even though Putnam was one of the founders fathers of Gilead, he is led away by the Eyes as Naomi and Serena Joy watch. Naomi doesn't want any maternal advice from SJ, thank you very much, everyone knows what happened with her husband and their first Handmaid. Men don't change, doncha know?

That taunt is enough to drive Serena Joy directly into the lion's den in her home; will she find anything there of June's?

June gets the package from the butcher!!

Which means that Moira came through!! 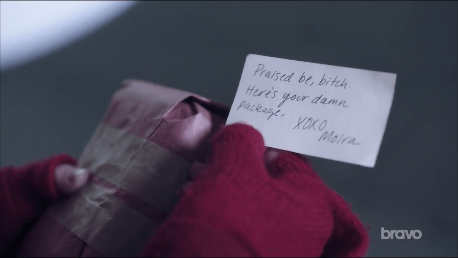 One dead john later and Moira is back in the rebellion, ho no more.

Go Moira! And June! We're out

So here's something I wondered about during; is the sex June had with the Commander this time consensual? The other times: NO, but this time she asked him and indeed went out of her way to make sure there was distracting sex so she could get her hands on the package to get OUT of this nightmare. So: consensual with the overarching inability to give consent in this society?

Somebody help me out here!

Because if we look at it through that lens, her choice to have sex with Nick isn't consensual either, because he has the control of life or death over her. Well. They wouldn't kill her (viable uterus) but they'd certainly make an example out of her.

And what's Nick doing anyway, trying to help the Commander when he sensed that June was up to something? Is he a True Believer reluctantly in love against his best beliefs?

This is the penultimate episode of the first season so I won't shout too much right now, but once again I am struck by the visuals in this show. The movements of the Handmaids and the endlessly grey climate combine to make an iconic-looking show. The blood-red Handmaid's cloaks against the drab always makes me think of fertility, what about you? Until next time.