Hey yo, how's it going? You ready for some more Below Deck under the sea with Sunshine? Me too. Rolling into my recap of BD S8:E07 Runaway Chef after the break, wooooo.

We open where we closed: with Captain Lee Rosbach calling deckhand Shane 'Sunshine' Coopersmith to the bridge for a Come to Jeebus meeting with bosun Eddie Lucas.

Will he be fired? Will he stay? Let's review his work history: he's been late on deck for his shift more than once, he actually took a nap during a shift, he doesn't know much about yachting and he's got a smart mouth.

Oh. But he saves turtles, one paper straw at a time.

Captain Lee takes no pleasure in firing anyone, but sometimes...you gotta do what needs to be done.

Ooh and an ominous warning ahead: 36 hours from now chef Rachel Hargrove is going to call something disgusting, ask for a flight home and tell Captain Lee to go eff himself.

What could make her fly off the handle like that during a Preference Sheet Meeting? That's the most fun we have these days on Below Deck! We get to make fun of trustfund babies calling themselves entrepreneurs and asking for Himalayan pink salt on their sliced avocado toast!

Back in the now, we've got to get Shane off the boat. He still awkwardly defends himself to Eddie (he would have exceeded expectations by the end of the season) so Eddie has to get a little mean: he needed a fully cooked sausage by this time, not a live pig with an expectant air.

Deckhand James Hough grabs Shane's surfboard from storage (like of COURSE Shane had a surfboard) and heads up on deck to say goodbye. Third steward Ashling Lorger is surprisingly affected by Shane's leaving, she's only been there a minute.

This deck crew has gone under a lot of transition in a short period of time! First we lost Avery Russell to a family emergency, now Shane, that's a lot for only three charters in.

Shane hugs everyone goodbye before getting picked up, everyone except Rachel who doesn't want to come say goodbye. She doesn't care.

Shane's chalking this up as a win because. Honestly. Who cares. Goodbye, Sunshine.

Huh. So it's not Shane getting fired that sets Rachel off, hm.

Shane was not the only slow mover aship the fair My Seanna, second steward Elizabeth Frankini doesn't exactly set the world afire with her work ethic. Chief steward Francesca Rubi calls Elizabeth over and over on the radio to get to work, but Elizabeth is too busy gossiping about Shane with Eddie and doesn't hear her. Francesca finds Elizabeth and drags her off to work while Elizabeth's body forms itself into one large pout.

Eddie sits down with James and deckhand Isabelle 'Izzy' Wouters for a chat about Shane, how is everyone feeling? James was surprised but that's not surprising.

Rachel is feeling all mushy about her boyfriend, she misses him. We getta see texts and feel like creepers.

Is that why?? How could that be disgusting??

I feel like this is going to be a long episode.

Francesca calls her team to the sky lounge for a debrief of the last charter, guess who's doing amazing and who still isn't doing enough?? Okay, I'll give you the first one: Ashling, you tell me who sucks and is going to get yelled at again? Hint: she's already swung her hair and sighed four times this episode.

Elizabeth isn't doing guest service any better than she's doing cleaning, she decides to write off Francesca's feedback as being related to Francesca being a Gemini.

These are real adult people working a real job for which they are paid real money.

James finds Izzy crying in her bunk, she's worried she'll be fired next. James lends her a sympathetic ear while working his whole hand up inside his shorts from the wrong way round. 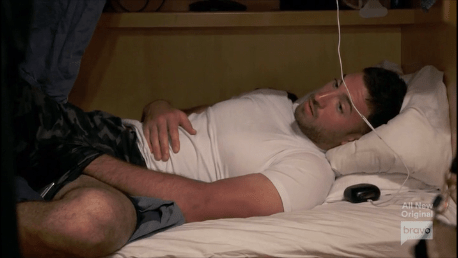 No more time for crying, it's a crew night out! Everyone dresses and gets relatively fancy, by the third charter everyone's feeling rundown and ehhhh. Except Rachel, she's looking hella forward to getting fcked up.

She and Elizabeth get schwasted before the main course even comes up, Elizabeth slowly slinging sexual innuendo at James while Rachel cries because she misses her boyfriend.

It just goes downhill from there, Rachel screaming at Elizabeth to STFU and suck it up, be a yachtie! Who cares!

Rachel grabs a bottle and heads to Eddie's room to ask to switch while James heads up on deck for a workout. I would applaud his commitment to being healthy but I think it borders on unhealthy, mentally. It's past 1 am. He's quite concerned about his body, I'm no expert but I wonder about dysmorphia.

Elizabeth interrupts his workout so he can talk to the friend she videocalled for good vibes, they lay and look at the stars while Eddie finally manages to get rid of Rachel.

I get that. I would probably want to hang out with Eddie too, he's pretty chill and that would probably rub off. I used to have a chill friend but turns out I confused "low effort" and "secretly needy" with chill.

There are a BUNCH of hungover peeps the next morning. Rachel is one; I am on pins and needles watching her, what's going to happen??

Elizabeth thinks she's been in her own head, that's the problem and okay. It's not that you're not doing the job properly, it's that you're overthinking it.

Is it overthinking when you ask your boss how to bleach something, she tells you and you do the opposite? Elizabeth asked Francesca how to handle bleaching a garment and was told to use cold water and place it outside because of fumes. Elizabeth did neither of those things and now Francesca and Ashling are feeling dizzy.

It's not going much better on deck as Captain Lee observes James rewashing something just done by Izzy, Shane just got fired yesterday you guys!

The engineer is called to the crew mess, Mario kicks everyone out and searches for the source of the toxic odour.

For someone telling other people to SHUT THE F*** UP AND DO THE JOB at the top of her lungs, Rachel is really struggling with being away from her boyfriend. I immediately got chills when I realised his name being Vincenzo meant he was Italian, this is directly pre-COVID. Italy was hit terribly and right out of the gates, he brings it up when she calls him begging him to visit.

This was filmed February 23, so a mere three weeks before everything fully caught fire across the world.

Elizabeth hears Rachel's keening and comforts her, the woman who was shrieking at her in much less kind fashion about her pain. Sigh.

Comforting aside, about two hours later when Rachel hears of Elizabeth's transgression with the bleach (as does the Captain, from the chief engineer), she advocates for firing Elizabeth, just like that.

This Rachel is jagged.

Francesca goes to Captain Lee, she would like to fire Elizabeth and get someone better to be second stew, but that couldn't happen before the next charter, only a day away. Captain Lee doesn't want to skid another person so soon after the last (even if that's where Francesca got her idea from) so Elizabeth has one more charter to prove her mettle. And shake her tailfeather, really.

Elizabeth is panicking to Rachel, of all people, when Francesca walks up and hears everything. Sigh. So Elizabeth calls Captain Lee.

James butts heads with Francesca, for literally no reason. Why are people fighting all the time? Oh. Right. halfway through the season.

Whose our Primary coming on board? Bryan Guarnieri and friends SomethingSomething and Wickliff Shreve. Thats's a NAME! Lookit this preference sheet! 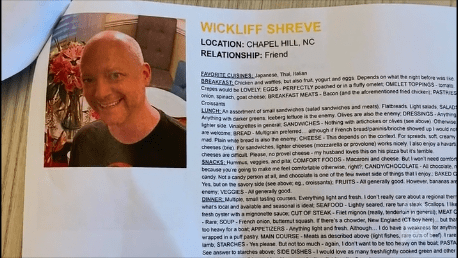 SAHD Morgan Ward's sheet is much less exciting but here it is anyway because it has ducklip. 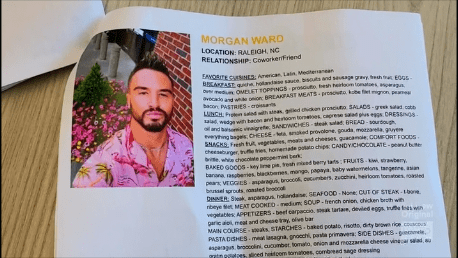 I mean. I knew the preference sheets were bad but I didn't realise they would push Rachel over the edge. That's exactly what they do, she's had it. She'd like a flight home, thanks.

Captain Lee lightly mocks her use of the word ostentatiousness (maybe not a word), she tells him to eff himself and this chef is oot.

Wow. If he thought finding a deckhand or second stew was going to be tough for tomorrow, where's he gonna dig up a chef of Rachel's caliber?

She keeps telling people to eat her cooter and I thinnnkkkk she means the incoming guests but she keeps saying at Francesca and Captain Lee, so I don't know.

Captain Lee calls her up to the bridge for a chat, trying to calm her down. What if they don't give the guests everything they're asking for? Can she just stay for a lunch and dinner? Rachel respects him, but she gotta go. Their conversation is cut short by an alarm ringing without stop,

Rachel is devolving at an alarming rate for someone not actually angry at another crew member, or drunk or either.

We're out with Rachel driving away chanting the legend "eat my cooter" and we're out! To be continued because Captain Lee needs to decide if he's going to cancel this impossible charter or not. Until next time!