This...has been quite the season of Below Deck already. I get why they're drawing these out a little bit *coughCOVIDcough* but I've never seen this many personnel changes in one season of any of the Below Deck franchises, have you?? Let's see if our second stew squeaks through another episode in my recap of Below Deck S8:E09 The Devil You Know after the break!

Where were we...oh yes, chief steward Francesca Rubi doing her level best to talk Captain Lee Rosbach into firing second steward Elizabeth Frankini. Captain Lee isn't on board, he's been dealing with one staffing issue after another and he'd just like to eat his stuffed french toast in peace, fanks.

The breakfast was cooked by the chef who stormed off his ship for 12 whole hours and sent him into a tailspin, returning mere moments before this awesome charter started.

I do MEAN AWESOME too! Primary Bryan Guanieri is super chill and funny for someone with the worst preference sheet of the season, his pal Wickliff Shreve is also fun and it's really just SAHD Morgan Ward that is being typical. He's super conventionally attractive but has already been burned for not being classy.

It's classy OR cute, you guys, come on. You know this, it's not our first rodeo.

Back to Francesca, Captain Lee really really doesn't want her to fire Elizabeth, saying sometimes it's better The Devil You Know..., so she agrees to just demote her. Seeing as she promoted Elizabeth based on nothing, I say why not?

Elizabeth is at a twilight beach picnic with the guests, unaware she's losing a stripe but going for a swim anyway. Deckhand Isabelle "Izzy" Wouters talks her into it, they heard Francesca and steward Ashling Lorger got to go earlier in the day and she's seizing the day, damnit!

I will point out that Francesca asked Captain Lee for permission to do so and the guests were off the boat, but that's probably nitpicking, like that you shouldn't gas your co-workers with a toxic combination of bleach and soap, Elizabeth.

Francesca and brand new deckhand Rob flirt on deck while they wait for the guests to return, it's awkward because he's Canadian and I can say that because I are one.

Izzy jumps in the water with Elizabeth, she thinks she likes to fix people because she has damage and you know what? You're good, Izzy, these are things just for the therapy sessions, as you were. I don't really believe in overthinking but if I did, I'd be making concerned faces in your direction right now.

As soon as they get back, Izzy has to help pull in the slide with bosun Eddie Lucas, she mutters "I hate you, I hate you" under her breath because the deck crew loathes the slide, always have: always will.

It's a French themed supper tonight, why has nobody mentioned that chef Rachel Hargrove serves foie gras every other night? French means tacky plastic fringe, apparently, guaranteed no self-respecting person from France would recognise literally anything going on here.

Rob is making besties with deckhand James Hough, they're going to play boardgames! Rob has a tattoo on his arm from Dungeons and Dragons...or some other game with pugicorns.

Rachel asks both the deck crew and Interior gang to help with plating her fancy meal but Eddie is still feeling the sting of rejection from her walkout two days ago. He pouts and hopes Captain Lee fires her right after this charter.

I will say that initially Captain Lee seemed fairly blasé about the whole business once Rachel came back, chefs, whaddayagonnado?? He wrote it off as a creative type thing. 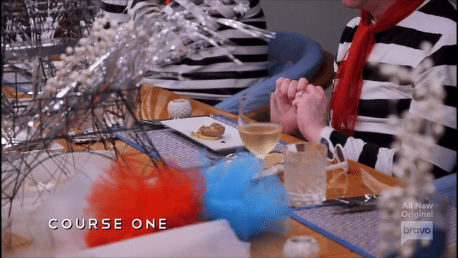 Followed by a french onion shooter? 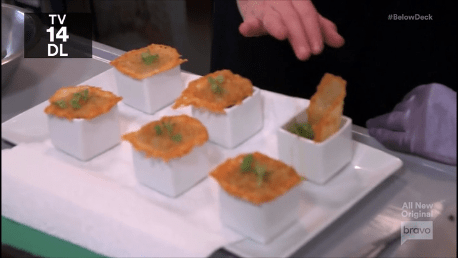 Elizabeth is paying too much attention to James and not enough to the plating, Francesca is getting madder by the second in her ridiculous messy French-ish wig.

Course three is a salad with freeze dried strawberries and champagne vinaigrette. 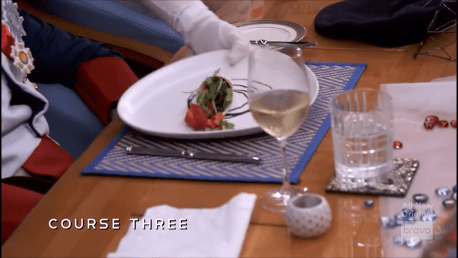 This is a 64 degree duck egg with truffles and oil. 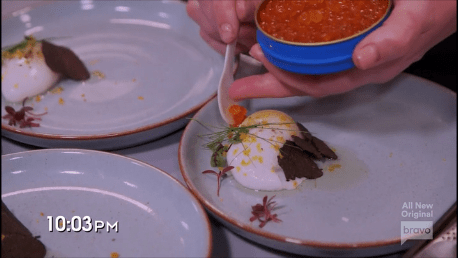 One of the reasons Rachel stormed out was the guests' ridic demands, but they're so appreciative! Lookit Primary Bryan and his fascinator! 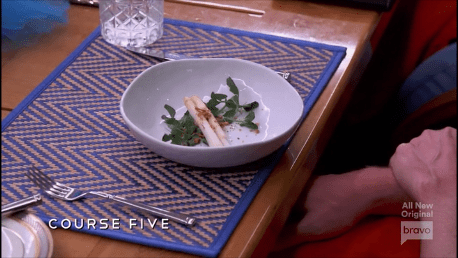 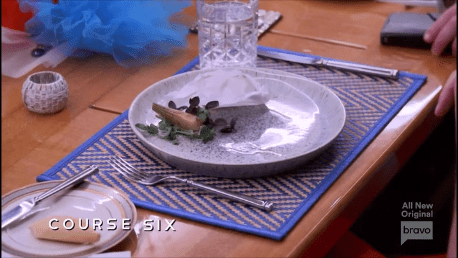 (Now I have to go watch my birthday video again) 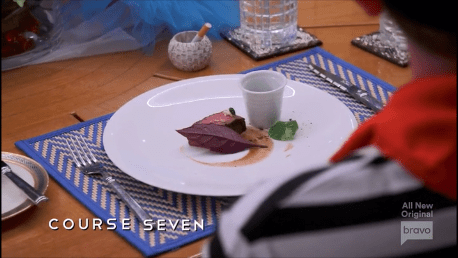 Sous vide duck with a crêpe makes the guests wonder aloud what planet Rachel is from. 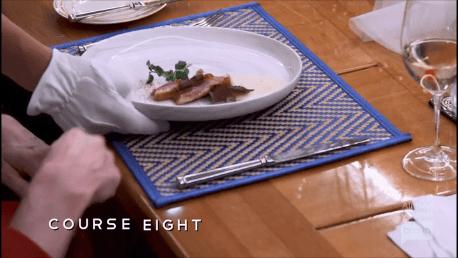 James is ecstatic to have someone around his age, male and into the same stupid stuff he likes (NOBODY LIKED THE SECOND POINT BREAK, JAMES), he's all in with Rob.

Course nine is a palate cleanser of mixed berries and...Pelegrino? Something refreshing. 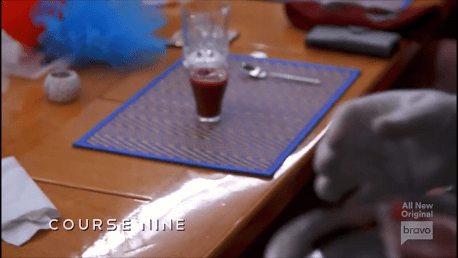 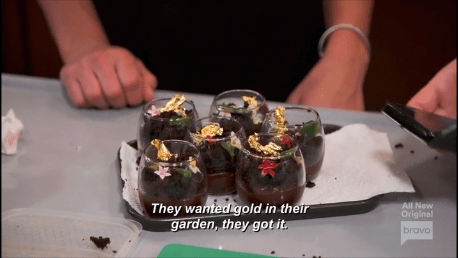 The guests loved everything, of course, we get a fun interlude with James and Rob planning their hot tub date after going out the next day while Primary Bryan and Morgan have a different kind of hot tub date right now. Morgan doesn't wear anything at all, I'm still shocked at how much Bravo shows on screen these days. I mean. I'm just assuming James and Rob won't be having that kind of party, but you know what happens when you assume! You see Morgan's ass.

James and Elizabeth have been slowly working their way through to a flirt, I dunno. She's totally flaky and he's pretty much humping walls at this point. He is conventionally adorable and so is she, though, and they're bored and in a small space together, why now? Bang it out, yell a bit at the reunion and live your life, people.

The guests are up early and quiet, time for brekkie on the last day of this wonderful charter! Why were we so afraid of them? They're not high maintenance at all! Pure lovely, I'd ride an inflatable unicorn with all.

Captain Lee pulls anchor and sets sail for Falmouth Harbour. He's not looking forward to it, he's got to park his big boat in a little slip again with lots of other expensive yachts nearby.

Eddie explains the upcoming manouevre to the crew and us, he's nervous. Captain Lee has to drop two (2) anchors then back into the dock without hurting My Seanna or any other boat.

At least Shane's not there!

Francesca spots another ship she worked on in the harbour and runs downstairs for a cry. This crew is just against her, they don't see her as a person at all. She misses being seen and the camaraderie of her last team.

The docking goes smoothly until we're three feet from tying up, Captain Lee almost hits when random alarms go off and he doesn't hear the three foot call. Yiiiikes.

Awwww it's so cute, Primary Bryan snuck down into the galley to give a personal thanks to Rachel, who says she likes him MUCH more than she liked his provision lists (paraphrasing).

Primary Bryan cries as he says goodbye, he just appreciated everything so much!

It's not long until Captain Lee calls everyone to the crew mess: how much??? Show us the tip!!

In front of everyone, Captain Lee calls Rachel on the carpet for leaving, fair. He tells us she may be the most talented chef he's ever worked with, but he's still feeling cautious. Once bitten, twice Great White.

He offers an afternoon at a dockies sanctuary (??), he may even join!

It is indeed a gaggle of old donkeys squealing in the hot Antigua sun. I love that one uses Captain Lee to lean on, I would absolutely do that. He reminds me of one of my American uncles.

Francesca and Eddie chose to stay aship, he cleans while she does yoga and aligns her chakras. She doesn't want to fire Elizabeth (and doesn't have permission to, anyway) but she needs to find a way to motivate her to execute her job much, much better.

She calls Elizabeth down to the sky lounge for a talk and I hold my breath that she has something positive to say...then she starts in on Elizabeth again and honestly, Francesca, that ain't it. Okay, it's not that you're wrong necessarily in saying her priorities are elsewhere *cut to Elizabeth ignoring Francesca talking to stare at James* but.

Francesca bumps Elizabeth down a stripe, awww, we just saw James saying how awesome it was that she had two!

Izzy is in shock when Elizabeth tells her of her demotion, but Ashling gets it.

Izzy keeps shittalking, loudly and in shared quarters. Giiiirl. You know Francesca is one second away and those walls are like paper.

Of course Francesca hears and confronts them, I'd forgotten for a moment that Izzy used to work under Francesca for one charter so she has a definite opinion.

It's a somber mood getting ready to go out, Izzy shares her history of a breakdown because of a past sexual assault. I just. I can't, you guys. I am glad she feels capable of sharing and taking away the stigma but I just. Those things are terrible and extremely difficult to get over. I wish her well.

Elizabeth and James match each other drink for drink while flirting, but they're no match for Rachel who is pounding cocktails like nobody's business. Eddie has not forgiven her for walking out on them, he's in no mood for her shenanigans.

For the record, Rachel is me in my early 20s when drunk; handsy with Eddie, telling him to relax then running off and joining another table by dancing over weirdly.

SHE DIDN'T EVEN APOLOGIZE. Eddie's feelings are hurt.

They go to a club, Francesca flashing every signal in the world that she's interested in Rob (she likes Canadians!) but he's...not...connecting. She seems much more mature than him, he doesn't like to expose himself...wait. No, he really said that!

It's only 10:30 when they get back to the boat, awww, poor James. He's got a hot tub date planned anyway, but has switched out Rob for Elizabeth. They make out for hours, there's mascara and swimshorts everywhere.

We get a mid-season update of the path forward, I've never seen Captain Lee end a charter before! For why?? Elizabeth warned us that she gets jealous and possessive, looks like she wasn't lying! Don't forget to check out the audiocaps on your favourite podcatcher, where I mostly laugh at my own jokes and try to stop my pug from barking, C'mon, it's fun! Cheers!