We're already in the finale of Below Deck, what??? It must be a shorter season because of COVID, why else did we get three episode of Charley Waters right off the hop? RIGHT? Either way, we're shedding more crew as we go, like tossing out ballast on a balloon ride straight to heck. Rolling into my recap of Below Deck S8:E16 Premature Evacuation after the break!

We open where we left off (last night! I'm so late), with chief steward Francesca Rubi firing steward Elizabeth Frankini under Captain Lee Rosbach's watchful eye. Francesca has tried to fire Elizabeth numerous times, she's so excited! I can't believe Elizabeth is surprised, but here we are.

There are only two charters left (or ARE THEY??), why couldn't she just stay for those? Francesca haaaaaaaaates Elizabeth. Hates her. Francesca and other steward Ashling Lorger are gonna have a great big party once they get rid of the crying buzzkill on the boat.

Elizabeth stops by the galley to say she's leaving, chef Rachel Hargrove and lead deckhand Isabelle 'Izzy' Wouters are shocked. Francesca's not letting Elizabeth have some kind of goodbye tour, she reminds her to pack her shite and GTFO, just as Elizabeth is explaining.

For the record, the only person happier Elizabeth is leaving than Francesca and Ashling is the deckhand she's been banging, James Hough. He's been trying to find a way to end things, thanks Fran!

Elizabeth cries in her bunk as she packs and James beams from ear to ear in the crew mess at the news. 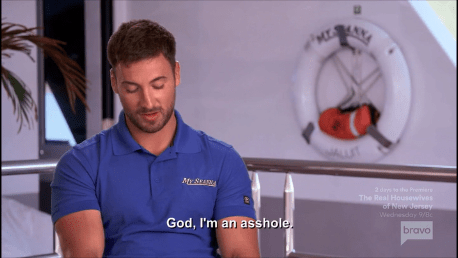 Oh and Izzy and Rachel arranged for a birthday cake to be delivered at dinner for Elizabeth tonight. Yikes. To be fair, Francesca did do her level best to fire Elizabeth on her actual birthday, I guess this is second best for her?

Everyone but her actual crewmates and the Captain line up at the back of the boat to say goodbye to a crying Elizabeth, honestly. Just a bad scene. Rachel and Elizabeth got quite close recently, so our chef is pissed, not least because Francesca and she have butted heads quite a lot lately over poor service and communication.

Who will Francesca blame now that Elizabeth is gone?

The crew finishes up for the day and gets ready to go out, everyone talking about the Coronavirus, including James's mom, who calls as he's waiting for the rest.

James does seem to miss Elizabeth for a second when he mourns the loss of his drinking partner, but rebounds a minute later when he asks Ashling if she can stand in? Not a chance.

More COVID talk at the dinner table, Eddie figures it will get really bad for two weeks, then get better.

That would have been AWESOME.

After supper, who's up for dessert? How about Elizabeth's birthday cake with sparklers on it!? When the server asks, Francesca says they don't need a knife for cutting it up. Rachel says "it's already in someone's back" ooooooooo.

I can't seriously believe that Francesca is eating the birthday cake of the woman she just fired. What an asshole. Celebrating firing someone with their own birthday cake is. That's cartoon villain time, Fran.

Rachel is pissssssssssssed. She takes her own van back to the boat then unloads in her shared cabin with Francesca. She calls her boyfriend to calm down, he's a cutie but it is 5 am in Italy, RACHEL.

The next morning, Rachel talks to Captain Lee about how she feels; he's careful to point out how much Francesca was doing. She was working from first thing in the morning to late at night because she could never be certain that Elizabeth would take care of the guests. Because a few times Elizabeth didn't.

Izzy is having her own fun out on deck with deckhand Rob OfToronto, who doesn't answer, or answers rudely or pretends he doesn't hear her, he's just an ass. A passive aggressive ass.

Sigh. Then we have aggressive aggressive Rachel calling Francesca to the kitchen for a meeting. Yaaaayyyy. They do decide to focus on work, sure, let's do that. Since we're AT work.

It's raining (boy do I miss rain), so outside cleaning of the superyacht comes to a halt 18 hours before our next charter. Captain Lee gets a text that makes him stare at the rain and rub his radio all over his lips for quite some time.

He calls the whole crew to the main salon. Both of the last two charters have cancelled their trips.

The yachties will be flying home tomorrow, hopefully before the borders close. Get some toilet paper and hand sanitizer!!!! James calls his mum with a warning and suddenly: everything makes sense about him.

They rouse enough to have a little goodbye party in the salon, but Captain Lee does not feel like celebrating with them, booooo.

It's very anticlimactic, yes? Like when Hannah Ferrier got fired on Below Deck Mediterranean. It's not like they're going back to a normal world, either, self-isolating has just become a thing so they're staring down the barrel of two weeks quarantine wherever they're going. Rob's taking a circuitous route; he's from Canada but he lives in Australia right now.

Huh. Captain Lee isn't taking My Seanna back to the owners, he's bailing and heading back home to his family. I don't blame him, but don't the rest of the less-camera-friendly crew have families too?

It's a blur of people leaving; Rob is out first after a quick chat with Izzy about what an arsehole he was being. He apologizes, not very sincerely, but who cares? Not he, he's leaving! Plus his buddy James tipped him off that Izzy was planning to speak with him, so it was a 100% a garbage apology.

Next to leave is Ashling, then Rachel, dang!

This is usually a whole episode and now we get a third and we're almost done!

James leaves, but Izzy goes and says goodbye to the Captain, she and Rachel both got some of the last hugs they'll get from a non-family member for awhile.

Okay, then everybody goes and I don't care any more. Boooo. No more rich charter guests, just stupid ACTUAL reality bursting our lovely Reality bubble. Francesca got everyone to sign a chamois for the Captain, she hands it over with a flourish while I whisper "Last day for you, Francesca!" under my breath.

Just when I thought I might make it through without crying, Captain Lee says Eddie is how he would have liked his son to be, had he lived.

Goodbye Captain Lee, we don't know when we'll see everyone again but I hope everyone is healthy and safe and able to concentrate on stupid things like who forgot whose condiments some time soon. Cheers, thanks for reading along this season, it's been a blast if weird and disjointed and ultimately just sad. Until next time!