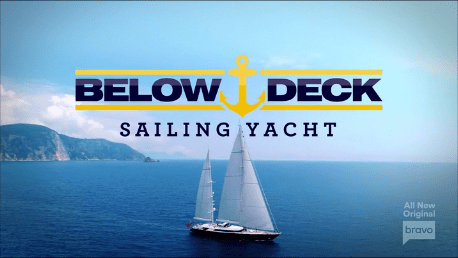 We're in Noak Marina in Corfu with the mostly intoxicated crew of the Parsifal on their first night out. Oh goodness. Chief Steward Jenna MacGillivray and Chef Adam Glick were among the extremely drunk, but Jenna much more so than Adam. She's ready to seal the deal on their mutual attraction, but he's sober enough to know what a horrible idea that would be the first night out.

Which was pretty chill but then

Jenna called herself a control freak, that is totally something I've seen before wherein someone who always has to be in control hands it over to a bottle. A FRIEND, OKAY?? Totally not me!!!

Anyway, Adam calls it for the night and I just want to hug Jenna, who is absolutely positively gonna feel terrible tomorrow. Who hasn't been there? I just thank the gods there weren't any cameras around when MY FRIEND got into such sitches.

Jenna passes out in her bunk in her bikini, nice of Bravo to show all the following shots of her from the perspective of her ass, honestly. Third Steward Georgia Grobler and Second Steward Madison Stalker gossip with Chief Engineer Byron Hissel in the galley, good thing everything stopped! If the chef and chief stew tango and it doesn't work out...

Deckhand Parker McCown isn't participating much, staring at his phone, but Byron is absolutely an instigator. He goes from asking whether Adam and Jenna are shagging to trying to find out why deckhand Ciara Duggan doesn't know where her boyfriend First Mate Paget Berry is right now. Paget's crashed out in his bed, waking up when Ciara gets into bed but doesn't really want to come and cuddle. Until she sighs, probably because there was some flirting and that BYRON stirring the pot just then.

Madison heads for the deck, Parker joins shortly with his guitar. They banter a bit but it's 3 am, so not for long.

It's 6 am and we only have six hours before charter! Jenna does not remember quite a lot of last night. Madison fills her in on trying to go to Adam's cabin and being shut down.

This is going to be a long day.

Jenna makes it into the galley to have the awkward conversation she's been dreading since she woke up, it's not that bad! Adam isn't giving her a hard time or anything, whew. Ciara is just happy she's in a committed relationship and doesn't have to deal with any of this shite. Just be weird about an empty box of cookies in the galley.

Pre-Charter Preference Sheet Meeting! I'm surprised we're doing it so late in the game, don't they have to order provisions based on those? Captain Glenn Shephard calls Adam, Jenna and Paget for a meeting, this is when I find out full guest names, wooooo!

I love it when our Primary Charter Guest is a woman, this time we've got Whitney Thompson Forrester from Tennessee, that sounds familiar...I'll google after we meet. She owns a restaurant Copper Vault with her hubs but Whitney and her cousin Hannah Wilcox are vegan. Lemme see what other names we got...Jeremy Parrish, Katie MacLachlan, who else? Robyn Donnelly's coming too! They're expecting excellent service and a toga party!

Provisions are heyah! And they include a lot of vegan stuff, yay. Jenna is dying in the galley with Adam but holding it together on the outside. No biggie! So I followed you to your bunk, I was lost!

I feel bad for Jenna right until she gives her stews feedback on their service.

It's time for guest arrival, get out on deck with your cold towels everyone!

Whitney looks familiar..brb. IT'S WHITNEY!!!! From America's Next Top Model! She used to be blonde and erm, alternative size! I recognise her eyes and teeth but her colouring and hair is all different! I really liked her, I used to watch that show religiously and I was stupidly happy when a plus model won, but I remember it felt really anticlimactic.

Boat tour! I already love guest Jeremy Parrish, they love the boat and the poor deckhands schlepp in all the luggage. Captain Glenn de-docks with ease, Jenna sets up for lunch and the guests driiiink.

Ciara is not taking any criticism from Paget whatsoever, even any of the warranted constructive type and whose idea was it to put them in a subordinate/boss situation?

Adam serves his first meal, when Georgia tries to hold the plate the way Jenna told her to, Adam takes it away and serves it himself. He calls his food "vegetarian" but he knows the difference between that and vegan, right? RIGHT?

The guests really wanted to sail the first day, but there isn't any wind. Captain Glenn is doing his best, but he can't make wind, Primary Whitney! Wooooo but he gets the sails up and we're cruising along at...3 knots. There is 0 degree heel, which is exactly what you want it you're eating lunch outside on unsecured plates.

Guest Katie MacLachlan insists that Captain Glenn find some wind, she's all over his jock and hey! You read a book on sailing, I get it! She finally gives up insisting that Captain Glenn manufacture wind and he puts down the sails.

Georgia does laundry and Madison listens in horror as Jenna and Adam flirt in the galley.

But but Madison, you don't get it! Jenna feels like 100% shite right now since she was rejected and doesn't even remember it. Adam flirting with her is making her feel like less of an arsehole for throwing herself at him in a blackout. If you're saying noooooo because the whole idea is wrong: totally with you.

Captain Glenn's come up with an idea to impress the guests for supper, it involves lots of chains (Paget's "Bro, do you even chain??" made me laugh out loud) and a cliff. So, basically, Tuesdays. It takes Paget and Parker a full hour with Captain Glenn and Byron watching to get a rock chained in the inlet.

I do not know why they are chaining a rock in the inlet.

Supper time! The guests dress for supper and I remember why it was so anticlimactic when Whitney won ANTM. Her personality is...distant. Gorgeous woman, but always seems removed.

Guest Robyn Donnelly isn't impressed with Adam's first course, a beet salad with vegan Feta cheese and candied nuts. I mean, I wouldn't eat beets on purpose if you paid me, so I get that, but everyone else likes the food.

Georgia and Madison do turndown service in the guest cabins; Georgia's smarting from Adam's dressing down at dinner. He took a plate from her, and she was super clear she thought she could do it and he still took it from her. Rude!

Madison seems really muted this charter, she was totally extra last episode and now she's been very quiet. It's okay, Madison! Jenna will chill out!

The guests are kind of arseholes, they mock Adam's dessert and him personally based on what they think is substandard presentation.

Who doesn't love a blueberry in a raspberry?? Me. I'd like them separated, thanks. Weird.

Jenna's job is to tell the chef when the guests don't like something, but since she's feeling a little uneasy from last night, she doesn't wannnnnaaaa.

What she means is: I won't score if you're all up in your head about your stupid beet salad.

It's nighttime and it's beautiful in Agni Bay, the guests go to bed before midnight, lovely! Madison's supposed to go to bed right after, but she stays up to hang with Parker.

It's a rainy morning, Captain Glenn has some ideas on how to still make this a good day for the guests. It involves some inflated NautiBuoys, which I thought were something else entirely. Ciara is not good at taking direction from her boyfriend/boss, she's ragingly insubordinate back.

Adam is being shitty to third stew Georgia again; why be so condescending, Adam? So rude and uncalled for. Georgia talks to Jenna about it, she thinks Adam is mistaking her inexperience for incompetence. Jenna says she'll talk to Adam about it, there's no reason to treat someone with disrespect in the workplace. Hahaha, just kidding, she tells Georgia to suck it up and deal because that's what she had to do.

I mean, where would Gilead be without an Aunt Lydia or two?

Jenna tells Adam, who defends his rudeness as being too busy for basic human niceties. He's not wasting precious seconds on anybody! Team Schmeam! Adam does talk to Georgia about it, it's his way or the highway. Georgia didn't realise that Jenna was going to tattle directly to Adam like that, now she knows what's up.

We haven't seen or heard much from Madison, except watching her change, which isn't creepy at all, Bravo. She gets up and tries to explain to Jenna why she didn't leave notes and how little sleep she's had, but Jenna ignores her and even talks over top of her to Adam. While Madison is speaking. Then she and Adam laugh.

I...don't think Jenna is a good person. At all. I don't care how good she possibly is at skipping rope and petting puppies.

Jenna stays in the kitchen flirting with Adam while Madison clears the table and tries to help Georgia in the guest cabins. They iron the sheets of every room every morning?? Man, I should probably at least wash mine.

Adam's ready to wow everyone with his food after their snarky comments about his stupid beet salad.

There's a toga party in the office and Georgia has been tasked with sheeting everyone. She wraps Paget in the crew mess while Ciara watches and listens. Ciara doesn't think Paget's flirting because apparently neither her ears or eyes work like yours and mine.

Ciara is not happy she doesn't have a toga, she can't find anything on this boat any more and SHE HASN'T HAD HER COFFEE ON BREAK, Paget!

I can't get a handle on whether Ciara is just a really disagreeable person or something else is going on. She screams at Paget literally every other times she sees him, I can't imagine that's the best relationship ever.

What he means is rottweiler, but actually pitbull, and one with lipstick but maybe there are mythical English creatures called "rockweilers" of which I am unaware.

Georgia togas Ciara, who finally relaxes. But she can't work on deck like that, which is her actual job, so now Paget's wondering what to do. Argue over and over, I guess! So that's what they do until it's time to go. Yaaaaaay and we're out. Until next time! Cheers!