This is it! The end of the world as we know it on Good Omens! How does it turn out? I'm glad you asked! Let's roll into the Good Omens series one finale after the break and find out.

We open in Hell, Beelzebub (Anna Maxwell Martin from The Bletchley Circle!) leading a motley crew including Dagon, Lord of the Flies (Elizabeth Berrington from Yesterday!) and Crowley's old pal Duke of Hell Hastur (Ned Dennehy). It's time to try Anthony J. Crowley (David Tennant), formerly known as Crawley, previously the serpent in the Garden of Eden before that. His crime? Being a traitor, which you'd think would be encouraged, wouldn't you?

I don't mean to split hairs, but there's only approximately twenty six and a half minutes left before the Apocalypse, surely they have other fish to fry, as it were?

A quick review of Crowley's transgressions, never mind, let's go back to where we left off!

The Four Horsemen of the Apocalypse: War (Mireille Enos from The Killing!!), Famine (Yusuf Gatewood), Pollution (Lourdes Faberes) and of course Death (Brian Cox, voice, Jamie Hill, performer) are at the Tadfied Air Force Base doing what they do best: starting a nuclear war. There to oppose them are the Antichrist Adam Young (Sam Taylor Buck) who is supposed to, in theory, be leading them but instead has chosen to be with his young friends Pepper (Amma Ris), Wensleydale (Alfie Taylor) and Brian (Ilan Galkoff).

Out back are Witchfinder Private Newton Pulsifer (Jack Whitehall) and the witch who found him, Anathema Device (Adria Arjona). Rushing in from the north are Witchfinder Sergeant Shadwell (Michael McKean), Madame Tracy (Miranda Richardson) and the angel Aziraphale (Michael Sheen) who has hitched a ride in her body.

Crowley's technically a demon, but he's quite attached to his best friend Aziraphale and is doing everything he can to stop a holy/unholy war, fanks, that's why he's at the Air Force Base. The poor guard (Andre Nightingale) has no idea how to deal with any of this.

Go getta cuppa, love, it'll all be over soon.

Crowley's car has been aflame since he drove through a Satanic prayer circle to get out of London (sounds about right), taking all of his concentration to keep it together and moving and now it's all done. It blows up in front of a devastated Crowley, who doesn't care about getting Armageddon stopped, he's having a MOMENT, AZIRAPHALE!

Aziraphale is the nice one! He can't be doing mean things to Army men who point guns at them! Crowley will not budge, so Az clicks off one tiny miracle that Shadwell assumes once again has come from his finger.

Aziraphale as Madame Tracy warns Shadwell he may need to use his actual weapon shortly, there's a battle ahead!

Six of one, half dozen the other, amirite?

16 minutes until the end of the world!

Tadfield is not just the setting of the End of Days, it's also where the Antichrist grew up and annoyed grumpy old men like R.P. Tyler (Bill Paterson from Fleabag! and Guilt!) on the Tadfield Neighbourhood Watch. Tyler has marched right over to Adam's dad Arthur (Daniel Mays) to tattle on Adam heading to the Air Force base, "Don't blame me if your son starts World War Three!"

We are in a standoff outside the Air Force base with the Four Horsemen facing off against Adam, Pepper, Wes and Dog. Madame Tracy/Aziraphale, Crowley and Shadwell come screeching up, Crowley pointing at Adam. Kill him, Aziraphale!

Inside the Air Force base, Newt and Anathema try to figure out how to stop nuclear annihilation. Technically Newt is a computer engineer, but a very, very bad one. He should do that, then! Try to make it work! That'll shut it down!

Pepper's not having that!

We should mention that Pepper's full name is Pepper Moonbeam Galadriel, she was raised properly, by hippies. She faces down War with "I believe in peace, b**ch" which felt a little mature, didn't it? I mean really.

Then Brian takes out Pollution, "I believe in a clean world"

Famine is taken out by Wensleydale and his belief in healthy school lunches, with an assist from Dog.

All that's left is Death. He steps forward as Beelzebub and Dagon get the troops pepped up in Hell for the War to End All Wars.

Anathema's figured out how to fix the computer problem they're facing, let total shite at computers Newt do his thing. Problem solved!

Death cannot be destroyed because that would wreck the world (for real, read 'Reaper Man' by Terry Prachett, it's what happens when Death takes a vacay) but he peaces out and that's all done, right?

But no. Heaven and Hell are still pretty set on having this war, everyone's been training for eons and nobody wants to go back to pushups yet.

Gabriel (Jon Hamm) and Beelzebub pop in, what's going on?? Aziraphale, Crowley, what's going on? They figure out who Adam is and approach him directly, let's get a restart going, shall we? But Adam doesn't want a war, or a restart OR to rule the world. It's hard enough to figure out fun games for his friends to play. He doesn't care if it's The Great Plan.

Aziraphale steps in: is that The Ineffable Plan too? Wait! Nobody knows! Gabriel and Beelzebub step aside to think this through.

Find yourself one of THOSE.

Aziraphale picks up his formerly flaming sword (it's back!) and holds it over Crowley: think of something! Or else...he'll never talk to him again. Awwww! We're off somewhere quiet with Az and Crowley in wings, explaining what's about to happen. Adam has to decide what will happen next, but he won't be alone.

Adam refuses to accept that Satan has any authority over him.

Arthur Young pulls up, would anyone like to explain what the Sam Hill is going on???

Aziraphale and Crowley review their performance in the aftermath. Imagine if either one of them had been at all competent at all? Az has been thinking about the prophecy that fell out of Agnes Nutter's book, what can this mean? 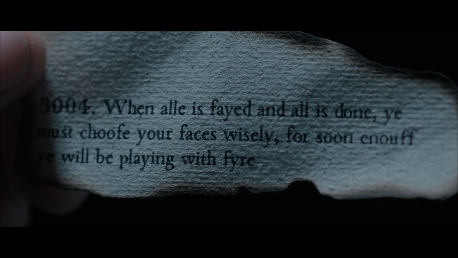 Adam is human again, and hey! Lesley the International Express Delivery Driver (Simon Merrells) whose been brought back from the dead! Hai Lesley! He takes back all the symbols of war, the sword, the scales, the crown; once again Aziraphale and Crowley are left alone.

Where will they go now? Aziraphale's book shoppe has burned down, Crowley offers to let Aziraphale stay at his place, but Az doesn't think his side would like that. But. They don't have a side any more. They have only Our Side.

When you think about it, that's all you really have anyway, if you're lucky enough to find someone willing to stroll over to the 14th century for you so you don't have to.

So. It's the day after the End of Days. The Start of Days? Adam has restarted the world, one giant Cycling of The Power. He's brought people back to life and even restored Aziraphale's book shoppe and Crowley's car!

But Crowley doesn't get into it, what?! He hails a cab instead, is that because he's about to get taken to trial for being a traitor?

Adam's cleaned his room, much to the delight of his mum Deidre Young (Sian Brooke from Guilt! and Doctor Foster series 2!) but he still can't go out since his dad grounded him.

Newt wakes Anathema up with a kiss; she rewards him by asking the question he's been dying to answer since he named his car Dick Turpin. Why?

It's all cuddly and sweet and musical, ehhh whatever.

Queen plays again, this time in the park with Crowley, Aziraphale and a couple of diplomats pretending not to have a meeting.

Neither the Higher Ups or the Downstairs Gang have contacted either of their progeny, but Death pops up - that's meant to be a bad sign! Aziraphale is swept up by Uriel (Gloria Obianyo) and Sandalphon (Paul Chahidi) as Crowley is dragged off by Hastur and Dagon.

Aziraphale is about to meet someone important but first we're back at Crowley's trial getting his punishment from the Archangel Michael (Doon Mackichan) carrying a pitcher of holy water. She pours it into a tub, one quick test with a small and adorable usher and we're in business!

Madame Tracy knocks on Shadwell's door, looking completely different! She's barely painted at all, you couldn't even really call her a Jezebel looking like that. I mean, he still does. She's set a place for him in her Den of Iniquity, would he like to dine there instead of her leaving a plate? He smooths his hair on the way over to his new life.

Newt has a visitor as well, it's Giles Baddicombe (Sanjeev Bhaskar!! FINALLY! I've been waiting this whole time for him to pop up! He's a huge favourite of mine, you can find him in each and every series of Unforgotten) with a small bequest for Newt and his wife! It's a box, his firm has had this bequest for over 300 years! It's a new book of prophecy from Agnes with a letter for Mr. Baddicome himself. Something about a lady on the local council? Hm?

He scoots and Anathema contemplates her new future that looks very much like her past. "Ye saga continues."

Madame Tracy's thinking about switching things up, herself, she proposes moving out of London to Shadwell, two can live as cheaply as one, is that right?

We're back at Aziraphale's reckoning, where he's arguing that averting the war was for the greater good. Gabriel doesn't want to hear it.

This is how they make examples of people in Heaven, by making them walk into flame. Aziraphale is polite to the end.

*Jon Hamm is spectacularly funny, it's too bad he got pigeonholed as a smoking hot effboi.

Crowley sits, not melting, in the tub of holy water as Aziraphale stands unburnt in the holy cleansing fire thingy. Crowley's gone native (okay, whew, it's okay to say), he can't be destroyed in the usual way any more. Aziraphale spits fire at Gabriel, Uriel and Sandalphon as Crowley makes a bargain with Beelzebub. They'll be leaving him alone after this, right?

Anathema considers the stack of papers in her hands, she chooses to feed them into fire instead of being a descendant her whole life.

Adam's friends find him in the garden, where he's been grounded to but the fortuitous and sudden failing of a bush leaves Dog to run out into the park and he has to follow, doesn't he? He spots Anathema and Newt, waving, then steals one of Neighbourhood Watch's apples and heads off to find his friends. What's the deal with apples and people?

Aziraphale and Crowley meet again in the park to switch bodies back, THAT's why they did so well in their punishment! They had chosen their faces wisely as Agnes told them! Best friends again, they head for lunch.

Sigh. And it's over to Tori Amos singing about a Nightingale in Berkeley Square.

I heard a rumour that there's a ship sailing for Aziraphale and Crowley being the local Bert and Ernie, we're loaded for references, aren't we? It seems to be all Aziraphale, though, interpreting things in a super endearing way.

And who can forget

What was that about sharing a body?

I think it would be lovely. Regardless, I've enjoyed the performance, but if I'm honest had trouble fully engaging. Everything seemed very much like a beautiful homage to my beloved Terry Pratchett and I'm not convinced it was acted, rather than lots of beautiful jazz hands at the same time. What say you?

Thanks for reading along, you lovely people, cheers!