We've had some good episodes of Black Mirror in Season 4, haven't we? Definitely been rolling right along with some interesting shows, let's find out what S4:E03 Crocodile has in store for us after the break.

We open in a disco with a young couple licking each other while looking high as f*ck. Then suddenly we're in the mountains in winter, driving through Jasper National Park? They're paying too much attention to the music (playing in disco and car) and hit an animal.

It came out of nowhere!!

Oh but they didn't hit an animal, they hit a person! A cyclist!

Rob (Andrew Gower) insists that they can't tell anyone, they can't go to the police, they're high as f*ck! And he was driving! Mia (Andrea Risenborough) is numb, she doesn't agree but she doesn't stop Rob from weighing the body down in a sleeping bag and tossing it into the water, either.

We're years later watching Mia rehearse a speech about Environmental blah blah and kiss her kiddo and hubs goodbye. No way is Rob her husband, this guy is standard-issue Canadian Cuddly Plaid.

Across the frozen hinterland is Shazia Akhand (Kiran Sonia Sawar) about to be lied to while investigating an insurance claim. She already saw Felicity Carmichael (Ólafía Hrönn Jónsdóttir) hasten to put on her collar and crutches, so. Let's talk about the accident!

Mia is in a hotel room away, guess who's come to see her? NO, GUESS??! Rob looks about the same, more furry but isn't everyone these days? He's also sober, which is causing a problem for him. Once one gets sober (usually, not always), there is a period of dealing with every single thing you drank to not deal with. ALSO: iffin you're in a group with twelve or more steps, one of those might be to make amends with all those you have harmed and yeah: you could say hitting someone with a car and throwing them in a glacial body of water could use a "sorry" or two.

Mia can't have that now, she's on the fast track!

There was a news story, though, Rob brought it for Mia and the cyclist's widow has lived the last of her years waiting for him to come home. It's a real tragedy.

Mia very much does not want to report this now. She did then, but now she's married with a nine year old son and a big job and she can't Rob, she just can't.

I am convinced she's going to murder Rob, most likely with the wine bottle she's holding in her hand.

My god, I could be writing this if I had more imagination and less of a pedantic bent. Mia kills Rob with the wine bottle and stares out the window where someone's been hit by a car. Toss him out onto the street?

We watch Shazia go about her day, investigating insurance claims is probably more fun than it looks, but you have to get used to everyone lying to you all the time.

She's with concert musician Gordy (think philharmonic not Metallica) with a busted hand, there was no CCTV of the incident, now they'll be using a Corroborator, which checks the person's memory of the event. No way that sounds creepy.

Gordy (Joshua James) doesn't remember anything, but no worries, Shazia has brought an olfactory aid: beer! The incident was by a brewery and the whole area reeked of beer.

She sticks something in his head and we're off to the races!

Black Mirror is all about repetition, here they're using the one song they always do: "Anyone Who Knows What Love Is (Will Understand) from S1:E02 15 Million Merits and S2:E6 White Christmas as well. They're not using the ZedEye implants though, this must be before they were standard issue in almost every single Black Mirror episode other than this one.

Shazia isn't able to get a full memory out of Gordy's melon, but she does find another witness she can ask.

Mia is having trouble connecting to her home life again, her husband Simon (Jamie Michie) is solicitous but seems entirely separate from her.

Wow, Shazia moves fast! She's found Noni Harper-Brown (Adelle Leonce) already and we getta see what she saw that day, which wasn't much but was what Mia saw out her window at the hotel! She also saw a dentist doing his thing across the street, guess who Shazia is interviewing now?

The flash that drew Shazia to William (Brian Pettifer) was him trying to take a picture of a naked guy showing his bum in a hotel window, up above we see Mia looking and now we know Shazia is going to find Mia and ask for her memories. I wonder if people can refuse? Mia has been drinking quite a lot today.

Shazia brainstorms with her hawt partner Anan (Anthony Welsh) and decides to track down Mia. I will just say that bracing Mia directly on upsetting things is not a good idea, overall.

I used to really like this song, but now Black Mirror has KILT it for me, fanks very much!!

Oh my bad, I forgot how bloody murderous Mia is, she goes to make a cup of coffee and instead stares at a carving knife. Jesus wept Mia, Shazia's husband knows where she went and haven't you doubled down enough on bad life choices?

Dark clouds roll in as Mia practices her story in the bathroom, it's showtime.

Shazia gets what she needs from Mia's head, but oh so much more. You can see when she starts to realise she's seeing more than even just one murder, I'd be watching out for that giant purple knife! Run, Shazia!

Mia doesn't know what Shazia saw on her little box, so she's not stabbing yet. Shazia keeps her game face on, but I hope her watering eyes don't give her away. She looks terrified.

Ah shit shit shit Shazia almost makes it away but she moves too fast, drawing Mia's ears up and her car won't start. Mia smashes open the window and drags Shazia out.

Mia has graduated to kidnapping and forcible confinement, Shazia begs for her life and suggests what she saw could be kept in private like a confession?

Mia knows Shazia is lying when she says she didn't tell anyone she was coming there, she's trying to protect her husband but Mia gets it out of her with the Corroborator.

Mia presumably bludgeons Shazia to death (after asking her to close her eyes) and heads to the city to quadruple down on the worst life choices ever. Not only is she murdering people left, right and center, she's not at her son's musical.

I feel as though this would be me, completely oblivious to an intruder and probably staring at my phone.

Mia murders Anan in the bath and I accidentally saw. I hate it when I see.

Exhausted, she prepares to leave (musical at 7:30!) when she hears the cooing of a baby. Oh god there's an adorable baby boy wanting upsies in the other bedroom. And she just murdered both of his parents.

Oh but she left a guinea pig who COULD see, what the hell, man?? 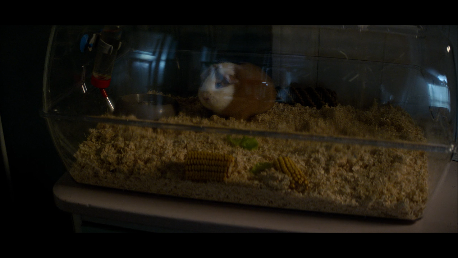 The police detective is Claire Rushbrook but honestly. The police come for Mia just as the musical ends and we are out.

What the hell was that??? Did we really just watch...honestly. Okay who here can imagine a situation wherein you would agree to an invasive interview KNOWING the murder you'd just committed would be front and centre? Let's see a show of hands! Legal requirement or not, anyone would have lawyered the eff up.

AND since when is Mia a coldblooded murderer? Yeah she is a big mucketymuck and responsible married person but surely she could have pled diminished responsibility or blamed the whole thing on Rob or something. The fact that we're to believe she'd rather eviscerate him with a wine bottle, THEN go on a tri-city murder spree...

ALSO: the part about killing the baby...and the extra salt of the baby being blind: screw you, Black Mirror, screw you for using the fictional death of an adorable baby boy to highlight how not-clever Mia was being by not killing the sighted guinea pig. Maybe for some it's just another shock play but for those of us who looked at an adorable baby boy with curly hair looking for his dadda, that was complete and utter gratuitously cruel bullshit.