Hi fellow foodies and welcome back to Top Chef, where we've already been to the Restaurant Wars and camping in winter. Who's ready for what they throw at us next? Me too! Rolling S15:E09 after the break!

We open after the loss of Claudette Zepeda-Wilkins during the Restaurant Wars, Amish soulfood chef Chris Scott is still shaken. He had assigned Claudette the role she ultimately failed at, she called it him abdicating responsibility but I think it was the opposite: he felt responsible for her failure. And he probably just assumed that she would step up into the role because really: that's what they're all here to do: execute service.

Chef Adrienne Cheatham was similarly in the bottom previously with Claudette (who is an excellent, creative chef, btw), she's able to breathe a bit better now. She would label Claudette as "Does Not Play Well With Others."

Baby chef Joe Sasto III calls his girlfriend to talk about his crystal alignment, no, for reals! So it's not just the mustache, y'all.

Chef Bruce Kalman is itching to get home, he and his wife just had a baby via surrogate and he wants to meet the wee lad! I can't even imagine how difficult it must be for him to focus.

They're off to the kitchen to meet host Padma Lakshmi, who tells them that not only is immunity of the table but they're about to roll into a Sudden Death Quickfire with edible flowers. David Kinch is guest judging, Sasto III has worked with him a bunch.

Chef Carrie Baird is not excited about this challenge.

Chris is ready to go but Bruce is making pasta AGAIN.

Chef Fatima Ali is freaked the eff oot but she's rolling with some lamb which, let's just say it: lamb has not fared well for the chefs this season.

Bruce can't make his spirit noodle so he's making one of the noodles he's made before.

Carrie is making toast, but not JUST toast, FANCY toast! Sasto III makes fun of it and works on his squash blossoms.

Everything looks so pretty! 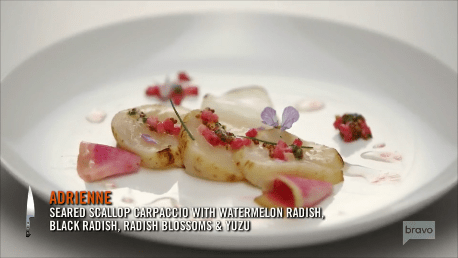 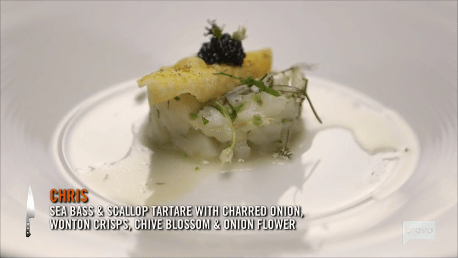 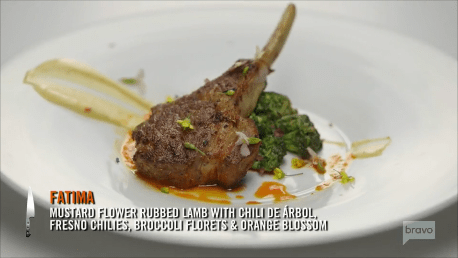 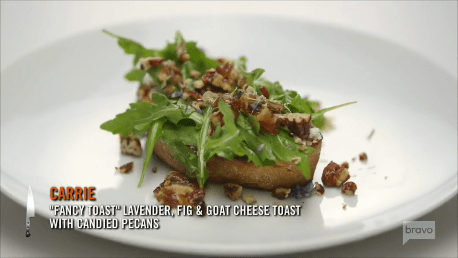 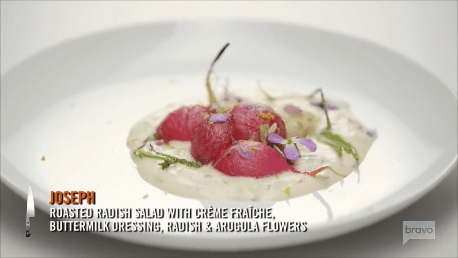 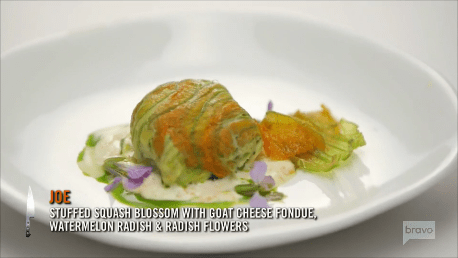 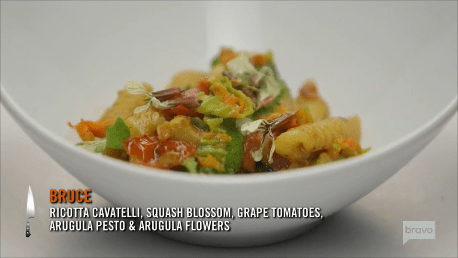 Bruce gets ripped a new one for making pasta AGAIN, but it's Joe Sasto ending up in the bottom after shittalking Carrie's toast that makes me smirk under my mustache.

It's Fatima and Carrie in the top and while I was really hoping for a first win for our plucky Paskistani purveyor of excellent food: it was Carrie's FANCY toast that won the day.

Now the bottom, which is super difficult because we will lose one of these chefs and I don't want to lose anyone!!

Joseph is in the bottom, he didn't roast his radishes long enough. Chris is also read for his pretty dish and Sasto III for his "pedestrian" squash blossoms. Oh man, all three are in a Sudden Death Quickfire and it's Chris vs The Joes.

Tom Colicchio shows up to introduce the challenge: they have to use cauliflower as a substitute in a recipe. We hear a lot about what Chris and Sasto are making, not much about Joseph which sucks for Adrienne. She likes Joseph best!

Sasto says his won't be pedestrian and we can quote him on that but I'm not going to because I like to be difficult.

I will be very surprised if Sasto goes home, he's been a frontrunner but he is on a bit of a downward spiral. 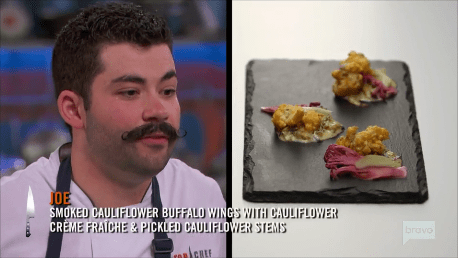 Next up is Joseph 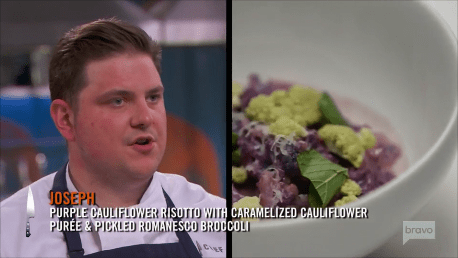 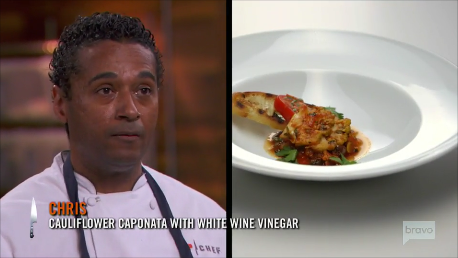 However, Tom hated EVERYTHING. Padma sends Joseph Flamm home and awww, I liked him! Everybody cries, Fatima is particularly upset.

Now we're on to the Elimination Challenge, which is like the Sudden Death Quickfire but first you have to feed 300 people THEN get sent to pack your knives.

Guest judge Adam Perry-Lang is a BBQ master and whose bestie? NO, GUESS??!! Bruce is good friend with this guy, get out!

The cheftestants will be creating a Super Bowl tailgating party, since Carrie won she gets to pick teams for everyone including herself. Who will she choose as her partner?

Chris! She chooses Chris for this challenge! Carrie sets Fatima and Bruce together and Joe and Adrienne.

Chris and Carrie are making green chile poutine and being Canadian (HAVE I MENTIONED THAT ENOUGH YET?) my ears perked right up. I will be watching closely and coaching from afar and the future.

THEY'RE NOT USING CHEESE CURDS

Poutine IS cheese curds. Otherwise you're talking about soggy fries and extra cheese for no purpose.

Tom and Adam walk around and check out the dishes, the amount of time they spend with Bruce and Fatima makes me nervous. Tom asking Sasto III if he actually TRIED the cauliflower makes me laugh.

Fatima comments on how Carrie keeps winning. I don't quite know what to make of Carrie either. There isn't anything wrong with her dishes and in fact her campfire cakes were amazing, but I find a lot of hers...boring. PLUS: NO CURDS. WHAT?

The chefs try to play football where Sasto III can't believe people touch a ball that's been on the ground.

It's a big deal at the stadium (Fatima's never been, well, except for when she went to Taylor Swift's 1989 tour (like OBVS)), the mayor Michael B. Hancock gives a speech and a Top Chef street sign and there are people setting up RVs and face painting and old Broncos and wow I forget how much Murica loves it's football.

I wish I loved anything as much as your everyday Murican loves its football. Well, maybe garlic?

A bunch of the guest judges are big Denver Broncos fans, one is Jennifer Jasinski and Carrie worked for her! See, it's not just Bruce that knows everyone! The White Team is up first: 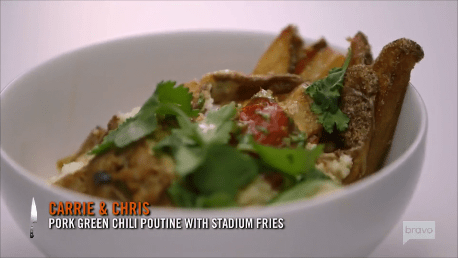 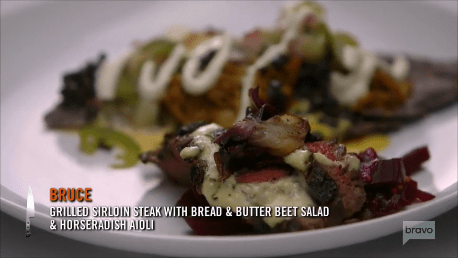 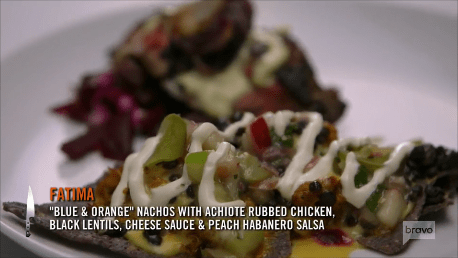 Next up are Joe and Adrienne 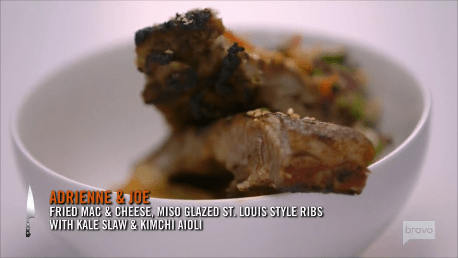 Bradley Roby does not approve of the soggy mac'n'cheese. His grandma would not be happy. Graham Elliot is similarly dismayed.

Everyone else goes around and eats what they missed and we meet some more former football players. These guys look pretty young, what's up with that?

Tom's not happy with anyone's output, he doesn't see a Super Bowl Champion here, not a one.

The cheftestants take a moment to appreciate where they are, how far they've come. Top Six y'all! Chris chokes up thinking about it.

We're in judging! Padma takes a second to tell them they all suck, then on to the good news: the clear winner is the White Team of Chris and Carrie! Everyone else looks sad and steps aside.

Chris and Carrie both won, so they getta go to the Superbowl which is this weekend! Hey, I'd watch commercials or something if they had a Top Chef moment!

Side note: Carrie is the Taylor Swift of Top Chef, always *wide eyes* "Oh I WON??!"

Bruce and Fatima get read for soggy nachos but Tom saves his ire for Adrienne and Sasto III. He gets dadmad and almost shouts about how much more he expected from them! Now go to your rooms! He's very disappointed!

It's between Joe and Fatima and I really don't want to lose Fati!!

Tom brings everyone back in to call Top Chef the SuperBowl of cooking and damnit we lose Fatima. Oh come on. COME ON! Padma looks almost as upset as I am but it's done and she's gone. Until next time, you guys. Have a great SuperBowl, I will be fondling garlic all Sunday.