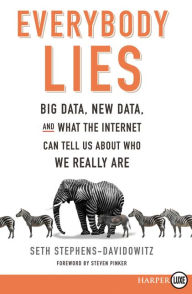 Technically, the book is called Everybody Lies: Big Data, New Data, and What The Internet Can Tell Us About Who We Really Are but YOU try fitting that in a hyperlink! I dare thee! ANYWAY, let's get to it.

In the interest of full disclosure: I loved this book. It was fascinating and I couldn't put it down, but I do have a couple of points that aren't quite so gushy.

The premise of the book is to explain the usefulness of Big Data, and show some very clear examples of how it can be applied in large and small ways. If you're anything like me, you probably think of Big Data being TOO big to be useful (think the 9/11 attacks), but here we see the capabilities of current technology. We can zoom in!

The bulk of Stephens-Davidowitz's research seems to come from Google searches (and Google Trends, they may be the same thing...) although he's used and reported on just about every method of data science known and previously unknown to science. DO YOU KNOW HOW IMPORTANT THE SIZE OF A HORSE'S LEFT VENTRICLE IS?? Now you do.

I do have a theory that it was specifically written to explain the Trump presidency and how poorly the polls performed at predicting voting patterns, but there's enough other stuff in there to please even the most ardent Trump-supporter (WHO ARE YOU??). Specifically, sex.

Stephens-Davidowitz explains in great detail what we really, really want and let's just say: it's both super surprising in some cases and super expected in the other. For instance: men ask a lot of questions about their wobblies. Lots and lots and LOTS of questions, as do women about their wobblies, but more about whether or there's a smell of "bleach"????? Gurl. Get thee to a doctor.

How about that WOMEN are the predominant searchers for "forced" or rape-type fantasy porn? That blew my mind, it literally made me stop what I was doing and gasp, in between locking my bathroom door because I'd just read the point above about mothers. I legit thought violent pornography was strictly for dudes with a strong misogynistic bent, turns out it's women with strong misogynistic bents. Or who knows, really? But it's not men fueling those clicks and that's bizarre. I bet Lindy West would explain that perfectly, but I am not Lindy West and all I can suggest is perhaps an internalization of inferiority. Or maybe: lizard brains don't give a fck what's gross in the daylight.

There are poignant moments, it's not all sex and sex and Trump and sex, the author delved into the question of how many gay men there really are and it's not the number you probably think. His interview with a closeted married man in an intolerant state was touching and tragic and while there are a million things that we could blame it on: the Patriarchy who have deemed pin-ees as weak; Big Religion that tries to control so much of people's sexuality and body choices but really: it's just achingly sad whatever the reason. "He regrets virtually every one of his major life decisions."

A similarly difficult to read passage on how young girls are treated online was shocking only because of the source, you'll see what I mean.

Some of the author's arguments seemed specious at best; for instance his mapping of male sports fans seemed entirely too specific to his particular area (and his sibling) than to be useful, but it was fun to read. I figure I have about 2 months to get my oldest hooked on a sport or all will be lost forever.

There were a couple of cringe-worthy moments, um, why would you compare horses to only black athletes and their lineage, my friend? Doth thou not remember Jimmy the Greek? Better to not compare people to animals and if you do, make it bloody equal.

Back to the main point of the book: how did Trump get elected?? HOW? The polls had Hillary Clinton far ahead, celebrities were declaring it all over but the crying: WHAT HAPPENED? Racism happened and while Donald Trump didn't invent racism or white nationalism, he sure as hell rode it all the way to the White House. In fact, it seems as though the man most responsible for putting the Purple Peach in the Director's chair was...Barack Obama. Just by existing and winning and being president, fires were stoked like never before and people were motivated. Motivated to search for the n-word in record numbers in all those states lost by Hillary, that is.

How about all those rousing speeches about tolerance and awesome Muslims abounding and the brotherhood? They were reported as terrific and they kinda were, terrific at stirring up Islamaphobia specifically.

And that, in the end, is what I liked most about the book. Yes, I dug finding out what freaky deekies we all are, but I'd long suspected nobody likes stirring rhetoric and that racism had a lot more to do with the election than Russia. Because it's one thing to say and promise to vote something, it's another to search for jokes about your least-favourite minority on a regular basis. It's a peek into people's REAL selves! Nobody lies to Google! Google isn't for impressing and honestly if it could help with the rash on your elbow, why not?

One last takeaway: Facebook is bullshit, but we all knew that, yes? We're a buncha National Enquirer reading troglodytes when the lights go down, aren't we? You can't lie to Google!

So have you read it yet? READ IT and tell me what you think! Your library probably has it, ask Google! You know it's on Amazon. I'd love to hear your opinion, what was your favourite part? Or did you hate it? Either way, let's workshop it. Cheers!

*picture credit above Barnes and Noble.