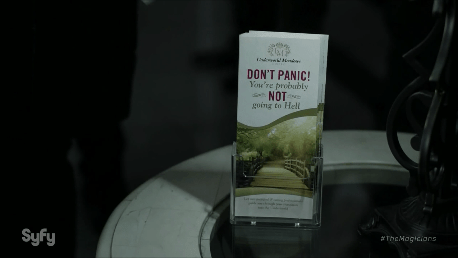 It's starting to look like I might get season two of The Magicians done before the next season starts, can I get an Amen up in here? Yeah I can! We've had some interesting developments lately (honestly, it would explain everything about politics as I know it) but really: The Magicians is just a fun show to watch. Rolling S2:E11 The Rattening after the break.

We're in an alley with Quentin Coldwater (Jason Ralph) and Julia Wicker (Stella Maeve) looking for their portal into the Underworld, since that's where Alice (Olivia Taylor-Dudley) told them they could find Julia's shade.

They gain entrance to the manhole portal using one of Quentin's baby teeth (like...for real, Q) and are soon down in the sewer talking to a dragon. Not like a Game of Thrones dragon, think smaller with an English accent and a tendency to swear a lot. 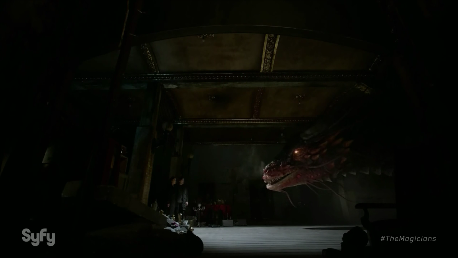 Quentin has to trade his button linking him to Fillory to get a 24 hour pass to the Underworld, their bodies stay there and get et if they don't make it back in time. The first door to Fillory is still open, Q and I don't remember what that means.

They take an elevator down into the Underworld, which looks like a mid-range hotel in one of your fancier midwest towns. A bellhop (Marc Senior) directs them to take a number because apparently death is like Canadian healthcare.

Back in Fillory, Eliot Waugh (Hale Appleman) is nervously awaiting his new groom Idri (Leonard Roberts), who doesn't care about fire dancers, he wants to get this party started! In Eliot's pants.

Quentin and Julia pick up some reading material

And watch a cheesy orientation video, which directs anyone without a shade to tell a bellhop immediately. Julia's packing.

But before they can call attention to it, someone else missing their shade is dragged away by security and Julia and Q decide not to report right away.

Their number is called and they're up to see the Concierge (Graeme McComb) who reassures them about the shades being nice and safe and ELSEWHERE and flags them as having died already 39 times, sooo there's a bureaucratic mixup and it'll take a minute. Do they like to ski? Hold up, Julia knows some recently dead peeps.

We're in the library with Penny Adiyodi (Arjun Gupta), who's practicing "sphincter magic" which is good practice anyway, according to the Head Librarian (Mageina Tovah).

She has another job for Penny, practice your flexing later, fella! He'll be shelving books under Silvia's (Roan Curtis) direction, yay for sulky teenagers!

Eliot and Idri are just getting to know each other

When Idri and a bunch of other people are turned into rats. Why? Eliot doesn't care, he's just figured out his night isn't going to go as planned.

Back at Brakebills, Kady (Jade Tailor) looks like she's having a nap while studying, but really she's having "inceptisex" (sp?) with Penny and strategizing on how best to get into the poison room in the Library to find out how to kill Reynard the Fox (Mackenzie Astin).

Kady suggests Penny find out through The Librarian and what's up with the Senator? Senator John Gaines (Christopher Gorham) has gone back to work, this time with Reynard kicking around in the background.

Gaines is workshopping an upcoming vote with his team, they're one vote away but Reynard knows how to secure that bill. "You look him straight in the eye and tell him plainly, directly." That seems like it should be more complicated, like with candles and pentagrams, etc, right?

Ahh, the gang Julia wanted to see was the one with her when everyone got murdered and she was raped by Reynard. Silver (Bobbi-Jean Charlton) and Menolly (Fiona Hogan) are great to see, but then there's Richard (also Mackenzie Astin), whose face Reynard has been using since the group was annihilated.

He's a big help though, he's been looking for his son (that he accidentally killed while high in his using days) so he's mapped out whatever is around. Hades and Persephone run the Underworld (I love Greek mythology! And Persephone is my favourite name from there, although she didn't have a great life) from Elysium, but nobody's seen them for awhile.

Some Quentin-shaming later, he bowls while tough-as-granite Julia talks to Richard, who has a couple of ideas.

Eliot and everyone else think Fenn (Brittany Curran) is one of the rats, but High Queen Margo (Summer Bishil) knows better: Fenn is with the fairies because Margo promised her baby to the fairies so they would clear the Wellspring of Ember's poop. It's very complicated. BUT. The Fairy Ambassador (Samuel Roukin) says there's another power at work that caused The Rattening, one that acts just because it can. Hmm

Phase One of Penny's plan is trying to bang the Head Librarian, but she's not falling for anything Penny is selling. She's not into emotionally insecure manchildren will admittedly hot bods who cover their shortcomings with volubility and profanity.

Gaines gets Cowden's (Fred Keating) vote, but also makes his opponent's heart stop working, so he needs to work on his technique. Gaines caves and tries to explain to his wife Cindy (Alexia Gilmore) that he's not a human, but somehow in the process he ends up commanding her to and that's not as much fun as making people do what you want by say: spanking them. Get back to me on that, R. Kelly!

Richard's plan is to distract The Concierge while Julia and Quentin run into the back and look through paperwork, they'll need to head to Elysium. Nobody saw that coming.

Elysium is just one big suburban McMansion filled with little kids performing small miracles, that's what shades do as their day jobs. An adorable one named Eugene (Liam Hughes), who looks just like a young Shiloh Pitt, tales them to see Julia's shade, after Quentin makes googly eyes and talks about how awesome young Julia was. I just don't know if I've seen that on this show, Julia is always angry and always kinda mean.

She even yells at a picture of Our Lady Underground, aka Persephone, aka who she and her gang thought they were summoning when they got Reynard.

Eliot's getting to the bottom of this right now, he's slipped everyone truth serum and they're spilling their troofied guts. Tick Pickwick (Rizwan Manji) has been stealing treasury funds, Abigail and Rafe (Sergio Osuna) have been running an escort service and of course: Margo screwed everything up. Eliot has his very best friend and High Queen thrown in the dungeon. I BEG YOUR PARDON??

In Elysium, Quentin's tracked down Julia's shade (Imogen Tear), but she's found Alice's shade (Ava Telek)! I will not lie, I was uncomfortable trying to figure out if he was gonna act inappropriately. Because the shades all look about 10 or 11. He kept it clean, yay!

If Alice's shade is in the Underworld, maybe that's why she was such a raging btch this season! It all makes sense now.

Reynard has had it up to here with his son's complaining, he wants to be president, yes? Apparently anybody can these days! Anybody! Then STFU and do as you're told, dude, unlike that Persephone, who just LEFT! Awww, it wasn't a coincidence that Reynard showed up when Julia et al were summoning Our Lady Underground, it was a targeted attack against Persephone's believers because she rejected him. Men.

Eliot spent almost an hour casting to get Josh Holberman (Trevor Einhorn) back into human (naked) form; Josh suggests forming a democracy to support the efforts and all of a sudden, Eliot's been kicked out of Fillory.

Kady and Penny are intersexing again, but with clothes on and talking when hitchhiker Sylvia pops up. She learned that trick from one of her "legitimate businessman" dad's thugs and she wants to get into the Poison Room too! Penny grudgingly agrees, but Kady's rudely awoken by Senator Gaines's unexpected visit. He's in

Rafe has brought a potion for Margo in the dungeon, it will take her to the land of the fairies. He would go, but..."you're a pussy, in love with a sloth who's currently a rat?" finishes Margo. That's about right.

It's her mess to clean up, and she's gone

Quentin has to leave Alice AGAIN (soooo over Qualice), her shade being in the Underworld was why he couldn't make the math work to bring her back. YET ANOTHER TEARFUL GOODBYE and we're running away from the Underworld with Julia's shade and

or is it? No! Julia's snagged Alice's shade to bring back, this was her one chance and she's spending it on Q. Awww! And we're oot.

This is such a fun show, honestly, watch it if you can. This episode had two things that made me go OH COME ON, but they're the usual ones. 1) please spare me another bloody scene of Quentin and Alice crying at each other and 2) Eliot needs to seal the deal more than we're seeing. He and Idri have zero chemistry, so Imma need to see much more simulated wobbly-smushing. Until next time!