Hello!! It's time to return to Drag Race, this time in my home country of Canada, yay! I am so.excited and I know you are too, so let's check out the fine flock of Canuck superstars after the break in my recap of Canada's Drag Race S1:E01 !

We open in a Canadian workroom!! 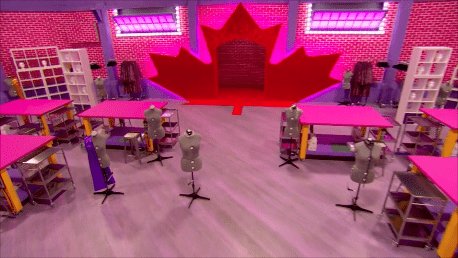 Just like Drag Race but with...a maple leaf...I guess it could have been a polar bear, this is me counting my blessings! 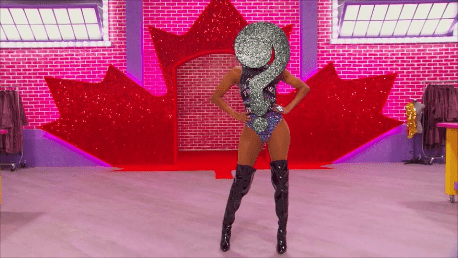 Wait. Who is that? It's Priyanka! 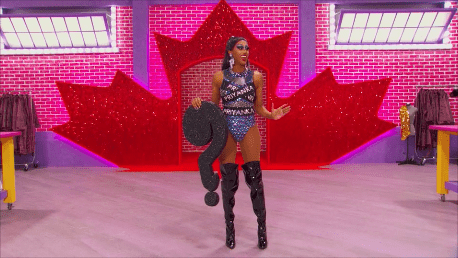 Quick rundown, Priyanka is 28, adorable, from Toronto and has only been in the game for two years. Well. This game. They used to be a children's TV host and I wanna know which one??!! Was it the show where they make stuff with a crazy wall of pipe cleaners? WAS IT? 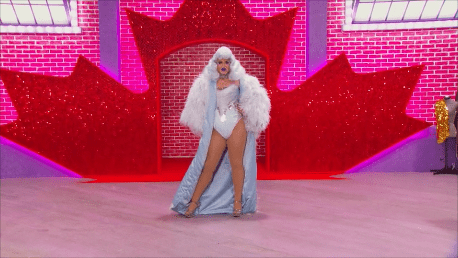 This is Ilona Verley from Vancouver, gurl, just because you CAN get something tattooed on you doesn't mean you SHOULD. She doesn't care what I think, she's here to "let these whores have it" because Vancouver-Canadian isn't really the same as Prairie-Canadian.

She immediately picks a fight with Priyanka by suggesting at least half of her Instagram followers are fake.

Kiara from Montreal walks in next, "en français, s'il vous plait!" She's just a baby, only 21! 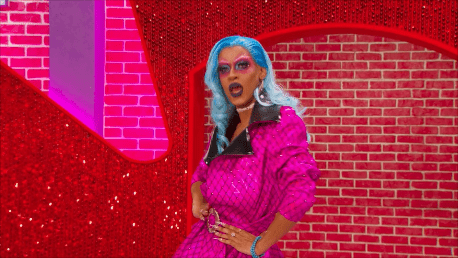 Juice Boxx struts in from Essex, Ontario but of course she lives in TO. I'm just excited to see a queen with freckles! 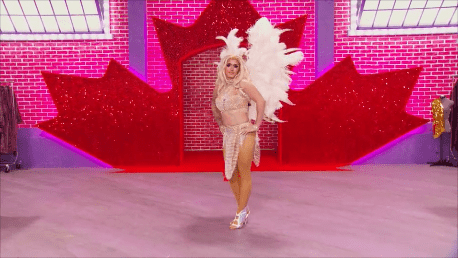 While being 'sensual' and adorable while whipping her hair around, she gets her bracelet caught on her tights and is frozen in place, not sure what to do. She keeps a smile on her face while she begs the girls for help, who laugh and cover their faces because this is not Canada's Best Friend Race!

Oooh we got a grown girl coming in on the runway! Hai Anastarzia Anaquway!

She's a 37 year old pageant queen from Ontario, which will mean TO. All roads lead to Toronto for performing in Ontario, darling. She's the reigning Miss Black Continental and I thought I recognised her!

Lemon walks in, but I'm confused, she's from New York, NY? Which part of Canadia is that? Lemme dig out my map, geography isn't my strong suit. Nope, still not in Canada!

She classy already. Okay, she lives in NY but she's from TO, I guess that's okay....

29 year old Scarlett BoBo walks in and now I know I'm back in Canada, check out this lovechild of Bozo the Clown (said with love) and Lee Aaron?! 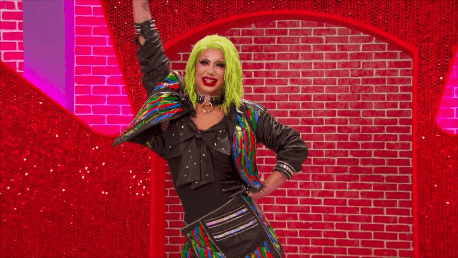 Of course she's from Toronto too, this is like New York and Drag Race!

Oh wait, Kyne is also from the T-dot (nobody says that) and she broke into a Dynasty locker on her way to the show. 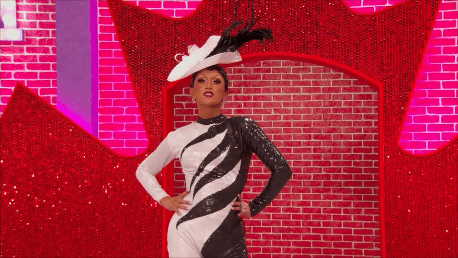 Kyne is a social media queen, okay honey. They have a lot of titles for themselves, huh? Hers is definitely the best, who else can claim the title of "Dancing Diva of the Kitchener-Waterloo-Cambridge Tri-City area"? I mean, who?

I can't stop looking at Juice Boxx, she's so CUTE! 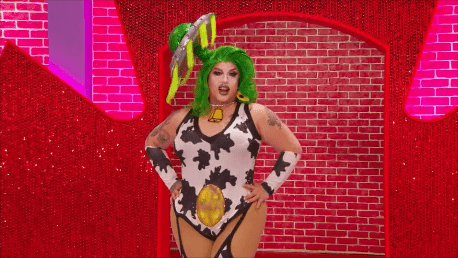 Juice Boxx gives us the backstory, BOA has a bad reputation in TO for being messy and annoying but she's super funny!

That was a very Canadian read, Juicy. 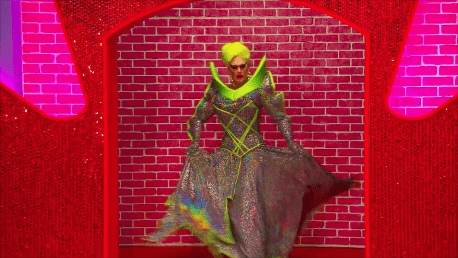 Why do you remind me of disguy?

But don't worry if it's tough to understand Rita.

Um. Jimbo. My mom told me if I had nothing good to say about 37 year old queens from Victoria, I should put it in a recap. What in Mickey Mouse skeleton bad breastplate no colour matching hell? 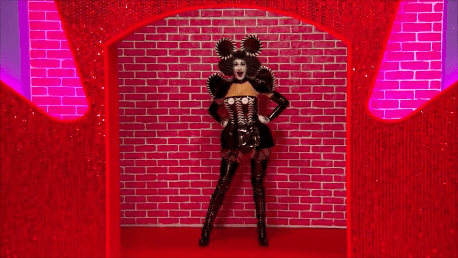 C'mon guys, get it together, you're making us look bad in front of the rest of Drag Race!!!!

We've got our first lookalike on CDR, welcome Tynomi Banks from the T-dot! (Nobody says that) 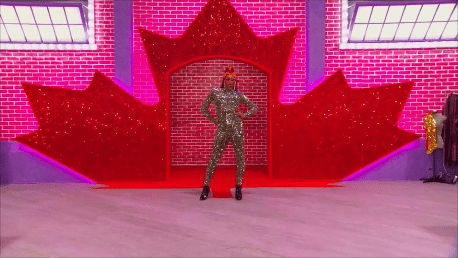 Suddenly, the RuLarm goes off, everyone runs (in heels!) for the announcement. 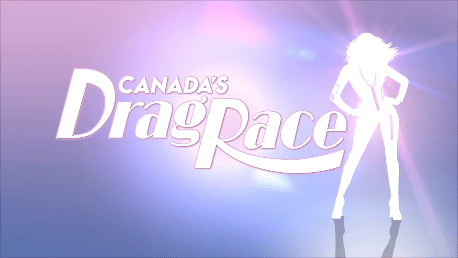 Hahahahahaahah listening to Ru try to speak Canadian was worth the whole price of admission hahahahaha. #Don'tPuckItUP!

The door opens and in walks Stacey McKenzie frommmmmmm America's Next Top Model wooooooo!!! In comes Queen of the North Brooke Lynn Hytes out of drag, she's so cute regardless, uh huh. Finally, we get Jeffrey Bowyer-Chapman from Unreal who looks adorable but whomever is selling these awful pencil mustaches: you need to stop, eh. It doesn't matter, he's so hot, the queens are literally all fanning themSELVES.

Jeffrey, Brooke and Stacey will all be deciding together who goes home, wins and break down the prizes for us; the winner will get a year's worth of hotel stays from Hilton (like, twice? Do they take pets? I have a Dwight who farts a lot) and $100,000.00 CAD, which is approximately $14.87 USD!

Wooooo time our first photo shoot, but erm, it's climbing up the Rocky Mountains to plant a flag in 6 inch heels while the wind blows?

YOU'RE NOT EXACTLY DISABUSING ANYONE OF CANADIAN STEREOTYPES, BROOKE.

I don't care, I love her, she's hilarious.

Matt Barnes is taking the pics, how cute is he?? 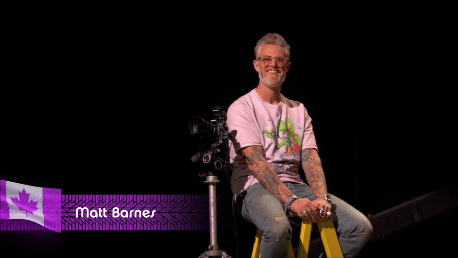 Ilona Verley is up first and she's ready to WERK. By that I mean she loses a nail immediately, strips and slips the flagpole through the giant ring in her nose. That ring flies off when the wind starts, IS THERE BLOOD?? I can't look???!! Ahhhh 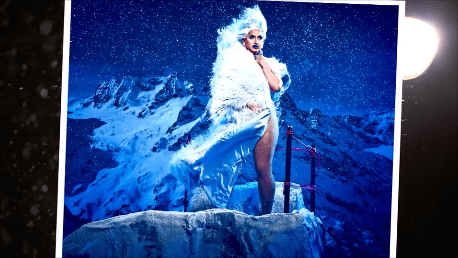 Priyanka skips to the top, she's feeling her oats (Scarlet Envy has a lot to answer for) then the wind machine starts trying to blow her eyelashes down her throat. 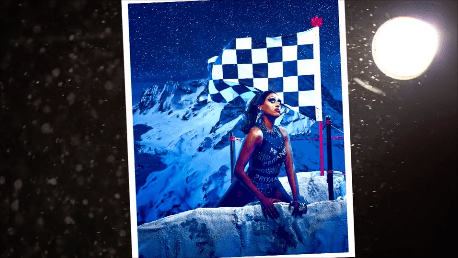 Scarlett BoBo, I love how game she is. LOVE. 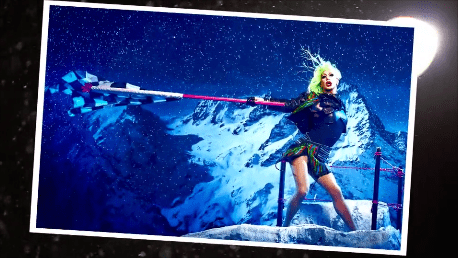 This is not the first peak Rita Baga has conquered. 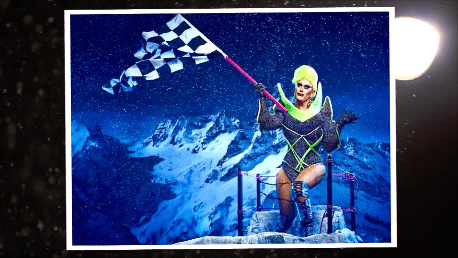 Kiara seems really unsure of herself and a total fangirl but she serves face in a blizzard and you can't hate that. 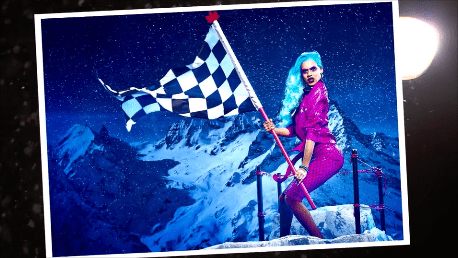 I'm going to have to work really hard to not favour Anastarzia Anaquway coz she's awesome. 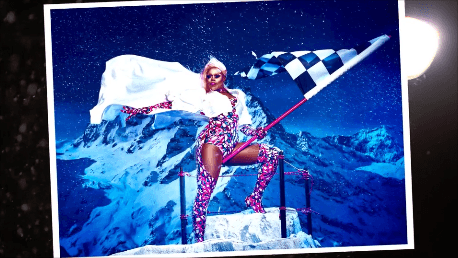 How are we not done even half these betches?? 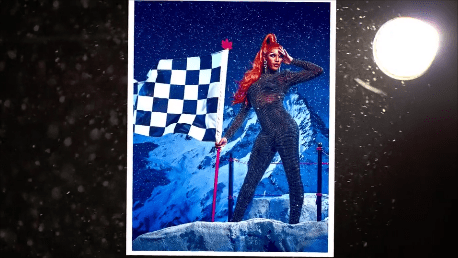 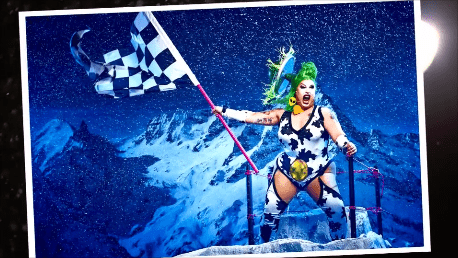 There is no way I'm not going to love Lemon, wherever she lives. She reminds me of Andrew Kannell and she funny. 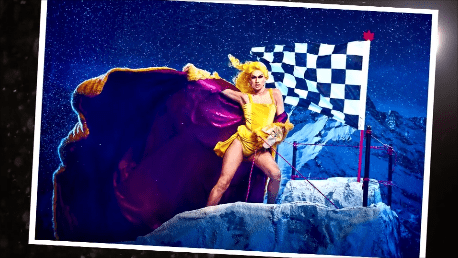 Hahahaha did they not tell Kyne there would be wind?? Why is everyone trying to eat the fake snow? Ah sweetie no. 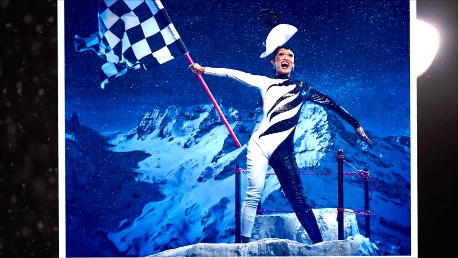 Look how cute Juice Boxx is??? 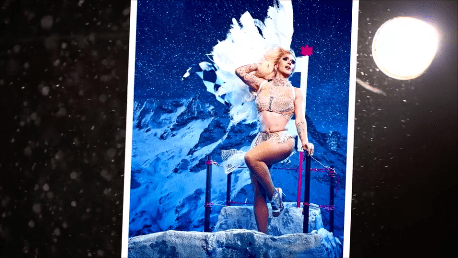 Jimbo isn't used to snow, she's from Victoria! (It's true, the west coast forgets how to drive if it even gets frosty) But she loves scaling mountains in 8 inch platform boots! 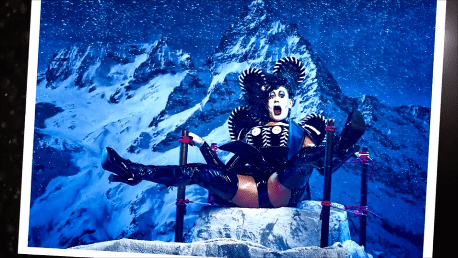 Oh I cried laughing, ohmigod she's so funny. I think the judges peed a little.

Everyone de-drags back in the workroom, Kyne's looking around for cute boys (hello: Lemon/Priyanka/Anastarzia), she's the cutest! (Definitely the trade of the season)

They all watch Jimbo take her makeup off; there could be anyone under all that. Priyanka likes what she sees.

Kyne wins the mini-challenge and a thousand dollars worth of latex couture, yay! Reallytho

We have a Canadian Pit Crew, woooooo!! The girls are very happy but those ginch are too big, amirite? Swimming in them, tsk tsk. 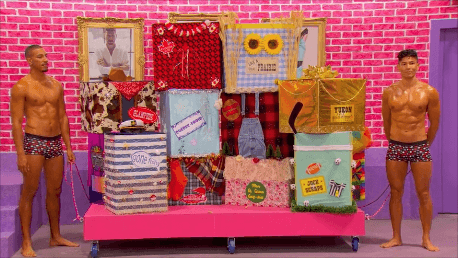 The queens have to make a look out of Canadian drag boxes with materials provided by Roots. Hahahaha 100% flannel and distressed leather baglets. Kyne gets to choose her own box coz she won.

How does BOA not know who Anne of Green Gables is?? You know that's the first citizenship question they ask when you try to enter another country, right?

(IF SOMEONE SAYS POUTINE)

Okay, they don't need to because Rita Baga whips out a package of cheese curds from her box and shares it with Ilone Verley because nobody cares about my stomach on this show. No.one.

I would not have guessed that Ilona Verley is indigenous, but she is and she's here to represent, face tattoos and all! She talks about learning about two-spirit and queer and it reminds me of this fragile homeless indigenous youth I met while volunteering. He looked really intimidating but when I asked him how he identified his sexuality, he whispered "bisexual" and I had to stop myself from hugging him. People are just people.

Hahahahaha watching Juicy try to break a CD in half while Lemon tried to hide was the best thing ever. They have no clue. None. Those edges are sharp, though, cover thyself!

Kyne is definitely Feeling Her Oats, some of the girls are getting edgy about it. Okay, you won a picture challenge (HOW), you don't need to be strutting around acting all American and shite.

WHY DOES KIARA HAVE DUCT TAPE ON HER HEAD? 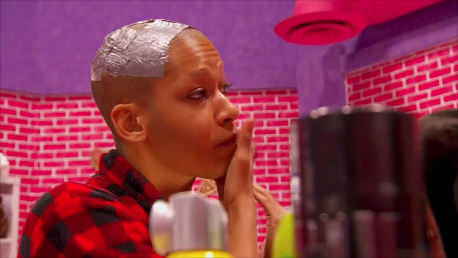 A) it's part of the Canadian challenge, i.e. Red Green

B) her bald head is like a chia pet, she just picks up poplar fluff like a mofo

I also dig BOA and Juice Boxx, both of whom are sober. The mirror never lies, you guys, this is one of the best parts of the show. Juicy cries, she's proud of herself and the better choices she made, honestly, I'm so proud of her too.

Are we positive Kyne is Canadian? Because she keeps talking about winning and it's making everyone uncomfortable but they don't say anything because THEY'RE Canadian for sure.

It's our first runway on Canada's Drag Race wooooo!!

Hahahaha Scarlett said she could get so much d**k at the Calgary Stampede in this getup, you could tell that was literally all she could think about after. She's still thinking about it!

I have been to many, many Much Music Video Dance Parties (hai prom!) but I never looked that cute.

Priyanka is ALL personality and face, she awesome.

Now! Who are the tops and who are the bottoms of who's left?

You don't have to answer that.

Awww, Lemon is in the bottom, as is Kyne which very much surprises her. She was ready to roll on out there on her bell bottoms and collect her prize! She quite firmly defends her look, okay, but. The judges loved BOAs potato getup, I love it when she and Brooke get into a "you're fun!" off.

I thought Rita Baga's act (pulling the cheese curds out of her dress and eating them on stage) and look (high fake snow realness) was okay, but I'm not a judge and they dug it, so there. They also really liked Jimbo's look, I liked that she said she couldn't feel her feet.

Juice Boxx looks so cute, but Jeffrey Bowyer-Chapman goes IN, calling it unfinished and sloppy and her whole look a mess. Juicy has a panic attack on stage and apologizes because she's so embarrassed because of course she does. She regroups in time to hear Elisha's positive feedback, then we're done and it's time for deliberations.

Hahahahaha "just between us Cariboo-boo-boos", Brooke calls Juicy's look "Party City Wilma Flintstone" hahahaha but then she says "bring back our loons" and does a birdcall and I'm at that point of laughing where there's no noise, just dolphin noises and twitching.

Kyne flips out backstage in the Untuck Lounge, she can't believe she's a bottom but she REALLY can't believe BOA is a top hahaha. She comes unglued, "we're living in a world where BOA beat me!!" BOA defends herself, Anastarzia points out that character matters too and it's basically a fight.

My two favourites are up for elimination against each other?????? Juice Boxx and Lemon???? COME ON!!! I demand a recount! Okay, I ask nicely. Please?!

On the other hand, I am super excited to see their performances!

Kyne gets told to find the line between confidence and arrogance and is sent to the back, after collecting all her gold Christmas bulbs on her hands and knees.

Ohhh I love Lemon but Juice is owning that stage in a way Lemon is not, she seems unsure of herself. Then she does the splits and I count her in again. And she wins. Awwwww I'm so happy for her but Juice Boxx was my favourite and now she's gone and boooooooooo.

Until next time, ladies, cheers!