Hi everyone and welcome back to Peter Kay's Car Share! I sure need it, how bout you? Let's see what the Wonder Twins are up to after last week's pukey shenanigans.

We open in the car with John (Peter Kay) on the phone talking with his bandmate Jim about their upcoming gig at a gymkhana (er), you know, right after Dog Agility! Is John bringing his bird, then? If she's fit she can help unload! John's not having any of that, fank you very much!

He takes a minute to feel up the bike Steve's been working on and then there's Kayleigh (Sian Gibson)!

THE 90s lesbian ode to plaid "Damn! I Wish I Was Your Lover" plays softly in the background as Kayleigh wishes out loud that she didn't have to do this today? Do what? Drive 45 minutes out of your way two times daily? Oh. She means go to work, she's gonna pull a sickie, come with her John! Forget old Litchy at the Wigan market, you can email him about your World Foods aisle! As for your Nutribullet, fella, it's life that needs juicing.

Tell me you didn't think of testicles, you big liar!

Kayleigh calls in sick while John listens in horrified amusement; up all night with it coming out both ends sounds super credible, especially when Sandra's been down with the same thing! Slam dunk! 10 bucks says Sandra is gonna see them!

Kayleigh talks a begrudging John into booking off, woo hoo! Road trip! He's got to stop and put air in his tires

TANGENT!! Carry on if you don't want to hear personal blather. This last two weeks has been the most mechanically-inclined and productive in my life: I fixed an air compressor so I could fill up bike tires. That's right; I figured out what fittings I needed, went to the store, bought the pieces and wrenched them into place and I MADE AIR!!!!! I also outfitted a complete tool box for myself, took off and replaced training wheels, I'm telling you: empowerment via grease-monkey-hood is a wonderful thing. TANGENT OVER!

Kayleigh's brought a change of clothes hahahahaha. John, this woman runs circles around you. They're off to the Wigan store! Hey, they have their own Ted2, just as "Push It" by Salt 'N'Pepa comes on COURSE

After a bunch of admonishments for Kayleigh to stay hidden in John's footwell; John's off to see Litchy (David Galbraith) who is veeery good looking. Until he opens his mouth and starts spouting innuendo about John and Kayleigh. John's just in it for the full English breakfast; honestly, Ian: the hand signals.

Let's get a sausage in you indeed! John pops out to find Kayleigh nowhere to be seen; she went for a pee and ice cream, like you would. They're off! John's CITED

And don't make him out to be a misery; he's plenty wild and crazy with his gymkhana rock and roll lifestyle

He's shared a stage with Mark King, he'll have us know! Kayleigh and me:

I think John and Kayleigh's differing approaches to taking an illicit day off is illustrated best by John donning a knitted beanie (those are toques, but I didn't know if anyone else spoke Canadian) and Kayleigh taking a selfie with the safari park mascot.

Kayleigh packed a full lunch, yo! Tuna sandwiches, Pom-bears, the works! John makes fun of the Pom-bears then immediately asks for some, which makes Kayleigh smile at the side of his head.

So. They're carpool buddies and now they're in a drive-through zoo taunting the zebras? I mean. A quick chat about Steve Irwin and they're into the lion preserve, woo hoo! Kayleigh eats a tuna sandwich while the lions eat an outcast; tuna is so meat! Say it isn't to a dolphin!

Moar snacks, more animals, it's like a lazy person's interaction with nature. Then there are monkeys all over the car. I didn't even know John's voice could go that high! The monkey penis might have been just a tetch too much.

They're at the beach now, having a lovely moment so John has something he wants to ask Kayleigh, if she'd be into it, he's been thinking about it..

...to be on John's Christmas team.

Kayleight stammers through a "yaaaaay", John thought she'd be chuffed! She is, she is, honest!

Then pee starts streaming down the windshield. They stole a monkey from the safari park! Out of the car everyone runs and that's it, they've got to get him corralled! Lookit how cute he is!

And then he puts on Sophie's sunglasses 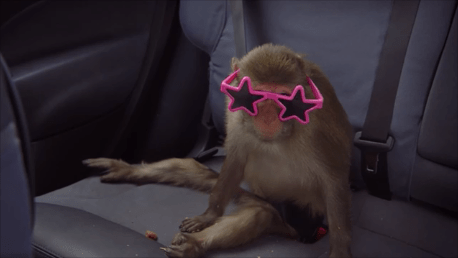 while they wait for the police. He starts to nod off, which is awesome until it starts raining ribbons of pee INSIDE the car. Then it gets a bit shouty.

The monkey is not going to miss you guys, Kayleigh 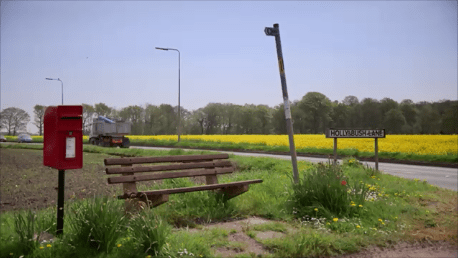 Until next time, you lot! Get a sausage in ya!