Welcome back to Peter Kay's Car Share; someone watched this live on my timeline on Twitter and I STILL have no idea what happens, except there's crying at the end. I don't like the crying! I'm still watching. Join me, won't you?

We open with John (Peter Kay) singing along with a song about cocaine in front of his Nan (Loraine Calvert) right before ForeverFM cuts to a commercial about funeral planning, "for when tomorrow DOESN'T come" hahaha what?

John's dropping his Nan off at his house for the day because a parcel's being delivered sometime between now and 6 pm. That's a load of shite, isn't it? I've been very lucky lately with my online ordering (I'M UNDER A LOT OF STRESS RIGHT NOW); they've been giving me really good two-hour delivery windows and it's brilliant!

That's okay, Nan, there's a quiche in the fridge and Sky's on the telly, have a good day!

He's off to get Kayleigh (Sian Gibson) but oops, Nan calls and the postman's already been round! Right after he left! So now Nan's stuck at his flat for the day, well, er, there's a quiche in the fridge and Sky on the telly! And *quieter voice* a stack of ironing..."oh honestly."

John pulls up outside Kayleigh's place; there's no Steve out front working on the bike and no Kayleigh, except she's calling. She's locked herself in, she can't find the key any place! John's out and problem-solving; has she got a hairpin?

And then he tries to lift her out a transom while the neighbours surreptitiously dial Crime Watch and then he falls.

They're waiting for the locksmith now; she loads up a cuppa with sugar because it's good for the shock, doncha know! You know what else is good for shock? Food! "Can I smell bacon?" Kayleigh laughs and I LOVE it. She makes him a sandwich but not one for her, stress hurts her belly. Except that she ate half of his and has sauce all over her face.

The ($140!!) locksmith has switched out the lock, but now there's just the one key, where will they put it so our Mandy can find it when she gets home? How about under the flower pot- 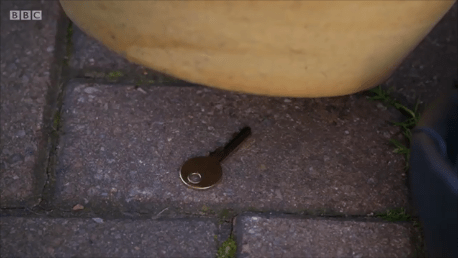 Where the OTHER spare key lives. We must never speak of the $140 locksmith again.

A woman in yellow silk garb from head to toe is marshalling traffic, what an odd outfit! Is it meant to be a super safe high-vis hijab? I don't even care because BUFFALO STANCE FROM NENEH CHERRY IS ON!!!

This is my JAM!! I loved this song back in the say ('89) and still like to throw a "huh sucka" out on Twitter every once in awhile. Kayeigh loves it too, she does a video!

Fun facts: did you know Neneh Cherry's song "Buddy X" is about how Lenny Kravitz is a huge, huge slut? And that Neneh's brother Eagle Eye Cherry sings one of my other favouritest songs ever "Save Tonight"? It featured heavily in my "exciting" twenties life.

I'm watching Kayleigh's video again: is she in blackface? Dude. You can't do blackface

Speaking of inappropriate skin tones; now they're reminiscing about Michael Jackson, whom I ADORED. I understand his later years were somewhat confusing and...non-linear, but he was a musical genius with an incredibly fucked-up childhood, so I focus on the talent.

That segues into a chat about video stores; renting tapes and rewinding fines and the rest of the nostalgia. Kayeligh was banned from her video shop, she never gave Dirty Dancing back!

SIDE NOTE: I rented Dirty Dancing over 100 hundred times as a teenager and: I DIDN'T EVEN HAVE  TV. I didn't! I was raised by a feminist hippie! So I would rent it and bring it over to friend's houses, THAT'S how much I loved Dirty Dancing. I even painted it on my wall in hot pink, my mom LOVED that. I can probably still do it line for line.

John didn't like it. Um. JOHN. He didn't even understand the main scene of the movie, where Patrick Swayze rescues Jennifer Grey from where her parents have stuck her in the corner and says "Nobody puts Baby in the corner." HOW CAN YOU WATCH DIRTY DANCING AND NOT GET THAT SCENE?? It means he loves her, John, come on! John doesn't understand why he doesn't just say it?? Don't talk in riddles, man!

Then he's off blathering on about synthesizers in the music and he really needs to get a grip. Look. I know Dirty Dancing is cheesy AF but it is still one of the best movies of all time and Kayleigh and I don't care how many synthesizers are innit. I once had a former friend use that line to defend me online! I miss my friend.

Then there is the Swayze and the dancing and the lifting, just like what everyone used to do in the baths! Except for her, he shoots out, she's aquaphobic, right? She loves that he remembers things like that about her, she tells him more than anyone.

John picks his teeth for a solid thirty seconds; it's like they've been married 20 years! They may have missed the rush time, but they haven't missed the golden hour, no. Ted 2 (Danny Swarsbrick) is having an ice cream cone.

And then "fucky lake" and while I have no idea what that means, Kayleigh, I'm still hashtagging it.

Time to start the day! John's got mud on his pants, so Kayleigh SPITS ON HIM and then tries to wipe it off. For the love of

After work, a bit of ruckus back home. Steve got home before our Mandy and thought she'd thrown him out so he went to her work with flowers, awww. Hahaha. And then one of their favourite songs is on, Red Light by Billy Ocean.

He loves this he does, holding hands and singing. She does too! And then he ruins it by bringing up that stupid Christmas team. What's the matter? And then we're into it.

She wants other things as well, John, not just the Christmas team, what about us? Is there an Us?

I swear, this conversation has happened so many times in the history of the world that you can hear ghosts whisper it for millennia if you catch the wind right.

Why does Kayleigh need a label though? Why can't they just enjoy it as it is and take it as it is (said every man ever) and not put a label on it? Cos she needs that, John. Cos she does. Just let it be! Don't overanalyse!

Kayleigh's not letting that go.

Does he want to spend more time with her? Is he not even bothered? Well of course he is, he drives out of his way 90 minutes every day, clearly he's bothered.

Kayleigh looks like she's trying not to cry, which is making me want to cry, John! Don't muck this up! She's trying to articulate how she's feeling, so John picks up his phone and starts fiddling with it. As she's talking about her feelings. He's staring at his phone while shouting "you have my full attention!"

They sit in angry and confused silence until Praying for Time by George Michael comes on. Kayleigh's hurt now, she doesn't want a belting song, John! He never even said anything about the song she told him to play! He turns up the radio instead, she turns it back down and we're going down in flames.

He won't admit how he feels, she won't stop pressing and he didn't say anything about the CD because it scared him, allright??!! But it's not all right, Kayleigh can't waste any more time, she's got no time to waste, John. She's going. Out of his car, out of his life.

AHHHHHH!!!! And then he doesn't say anything except "f*cking hell" and she's gone! And his text comes on the radio, it was "Nobody puts Kayleigh in the corner" !!! But she didn't hear it because she was walking down the highway to get into another car AHHHHH!!!!

Bloody hell, John, just SAY IT!! You were right in the middle of a dogfight and you went with cute?? CUTE??

Side note: my ex did exactly the same thing (not in the middle of a fight about "us" however) about the movie The Princess Bride. I would like to think I will someday be able to look back at that "as you wish" with fondness.

Marillions's song Kayleigh plays while John gets out of his car and climbs over a bunch of other cars (now I know it's a day dream, there's a perfectly good road shoulder right there) and I dig the slide!

And especially this bit

But he's not done that, he's sat and watched the van she's in drive away. His nan calls; where did he say that quiche was? Is he done?

Ahhhhh John, no you're not, you're not done! Stop being so afraid all your life, get out there and live! Squeeze every drop of it, and from Kayleigh too. I can't believe he went with adorable and romantic when he was in the middle of a massive row! There's no time for adorable and romantic when the "WHAT ARE WE"s are flying, John! Come on! Bloody hell, now I need to find the next episode right away. Until next time!

Update: there IS no next time, that was the end of this season! I KNOW! Only four episodes and THAT is how they're leaving us??? COME ON!! GHjsvbhjbvsdfhbvsfdfvjf. Oh wait, it's the end of CAR SHARE, there is no more!!

Okay. Maybe I'm too emotionally invested in these characters but I still can't believe they would leave us like this and NEVER have another series of it, why would they do that?? Thanks to everyone who read along with this series, and to EB for suggesting it. Just. WHY, PETER KAY??

I'm off to write a strongly-worded email to whichever intern is answering Peter Kay's mail. Cheers!