Hi guys! So last time we had nekkid guests wandering around above deck on Below Deck Mediterranean, how is the docking sitch looking, Captain Sandy? Has Bobby learned to count to five yet? These questions and more on S2:E4 of Below Deck Med!

Captain Sandy Yawn has been getting increasingly worried about the wind pushing them towards the rocks they're anchored to, let's send the greenest deckhand to push the giant yacht using the tiny tender! In case you don't know what a tender is, it's a dingy with an engine and windshield. THAT'S A GREAT PLAN.

It doesn't work anyway; they gotta do what Captain Sandy calls a "reset" to the guests and what everyone else calls Holy Shit Look How Close We Are To The Rocks. Bosun Wesley Walton explains it to Primary guest Mr. Skin while deckhand Bobby Giancola watches the anchor. You know, since that's his strong point.

They keep working on it while second and third stews Christine "Bugsy" Drake and Lauren Cohen gossip about Bobby below deck. Lauren is making things worse and worse for her, Bobby and chief stew Hannah Ferrier, why not just drop it all now? Just drop it! Don't talk about it, don't whisper in corners then complain that Bobby is whispering in corners: just.drop.it.

Bobby is just now realising that he should not have said ANYTHING to ANYONE. EVER

The guests go naked paddleboarding because of course they do, Captain Sandy is invited to dinner and Bugs is still trying to get used to the fact that her grandma died. Hannah has a fun shirt for Chef Adam Glick but he doesn't wanna wear it.

Wes can't get over how awesome deckhand Malia White is, and yeah, she's super pretty and friendly. He still swore he wouldn't date while working so I probably should have giffed that for evidence when he's trying to convince her to meet up with Eduardo Sanchez in the laundry room.

Captain Sandy tells Hannah and Adam she's coming for dinner, erp, there's a naked lady cake scheduled for tonight and Hannah just hopes her boss will be gone before the debauchery begins.

Bobby can't take this any more, he goes and apologizes to Hannah for jumping to conclusions then they cry and hug it out. Awwww!

Time to get ready for dinner! The guests get fancy, cleavage and feathered hair everywhere, and that's just the dudes. Captain Sandy checks on the anchor watch team (Malia and Wes) while Bobby amuses Max with videos of him pranking coworkers. Lauren cries listening. I mean.

Lauren. Yes, you're isolated from Bobby but that's because of your decision to lie or exaggerate what Hannah said to cover your own bum. We've all been there, thankfully not all of us trapped below deck with said people all at once for several weeks, but yeah! Just keep your head down and ride it out. Things will even out.

Or cry in the laundry room and talk to everyone but the person you lied to. One of those.

Hannah finds her bawling into the spray starch and is gone with barely a word; asking Malia if she can have her for dinner service. She's just gotta clear it with Wes; she's pretty sure she's lost Lauren for the night.

Hannah sends Bugs to do the captain's stuff; Bugs decides to talk to Lauren instead, see if she and her mood / work ethic can be salvaged. She's very understanding until she hears it's STILL ABOUT BOBBY. Here's Bugs, who just lost her grandmother, trying to console someone because they got called on their bullshit. I mean

Adam is excited that Malia's gonna be stewing this evening, he can get to know her! The guests love their tacky, tacky table settings and Captain Sandy's laid-back vibe.

Adam's wooing Malia with food, awww, I make butternut squash soup for my vegan and vegetarian relatives too! Adam's interested but gunshy, he just came off a 7-year relationship with a Middle Eastern woman who never told her parents about him. 7.years. Holy shite. Talk about cultural differences. I kind of think of Adam as Paul-Louis from the last ever season of Girls.

I think it's hilarious that all these guys are weighing and judging their pitches to Malia, who so isn't interested in anything serious. She just wants to have fun! And Hannah probs.

Dinner service is going well, but Malia is also meant to be doing anchor watch, is this where the talk about a boat ending up on the beach was foreshadowing?

The guests question Captain Sandy about getting so close to the rocks, so they DID notice! She placates them but doesn't sugarcoat it, she's good with these peeps. Adam is rocking out all the different food preferences and trying to make the cake and starting to sweat for the first time. Not into the food, dude! Hannah's distributing gag t-shirts to the crew while Adam finishes up the cake and Captain Sandy takes her leave. Whew, Hannah! 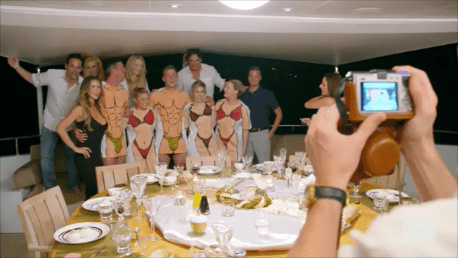 That was a cute idea, Hannah, they totally dig, Adam looks like a total greasball in his backwards hat and dirty apron, come ON. I can't believe he didn't wanna wear the shirt!

The guests get down to their boobie cakes while the crew goes to look at the Mr. Skin website. Then one guest crawls up on the lazy Susan to air out her moneymaker.

She literally sat and spun.

Lauren calls her dad, she's a daddy's girl! I didn't have a dad until I was in my twenties, so I don't know: at what age does that become gross? I'm guessing anything after 8 but definitely before video chatting with your at-least-topless father who is in bed.

Lauren's parents are divorcing too, that's part of why she ran out to Croatia to escape. Divorce sucks. Cannot recommend.

The guests head to bed early while Bugs and Hannah bond on deck. Hannah's been really impressed with Bugs' work on the boat thus far, how is she holding up? Hannah lost her brother when he was ten and she was five, it's affected her ever since. She takes all opportunities and that seemed like it very much meant specifically Below Deck Med just then.

It's the next day and everyone is up early, yay! I love early to rise and early to bed guests, the crew dig the downtime and I get all stabby when people waste their luxury time drooling on a pillow. Biting a pillow=okay, sleeping all over one all morning: you're wasting time, people!!

An exhausted Malia is pulling up the anchor as Captain Sandy notes what the guests said last night; the boat spun around. The anchor chain is one massive chunk of entwined links, they can't get it to retract.

Wes and Max go out and look at it, he recognises the problem right away. They had two anchors down and when the wind pushed the boat in a circle, they wrapped over each other and that's the mess we're seeing. Would a more experienced boat watch person have noticed that and been able to mitigate the issue? It was Malia's first time and she was in the galley more than on the bridge looking at instruments.

The tangled chains are causing another problem; they've got to get the guests back to port asap and they're already 90 minutes behind without a solution in sight.

The stews keep throwing food and drinks at the guests as Captain Sandy sends Bobby away and asks for Malia. His energy is not helpful while:

In fact, Bobby swinging his dick around when they're trying to problem solve prompts Captain Sandy to tell him to stand back if he's afraid. She knows what she's doing, back the eff up, FunBobs.

Now Wes is in the water and the guests are taking the extra time on the boat to shoot another segment of Naked News. This time it's Kat Curtis and she's just happy to be there!

Now we're six hours late for departure and Captain Sandy tells Hannah to call the guests a taxi while she goes down on the tender to work on the anchor chains some more, leaving Max and Malia to follow her commands from up top. They don't understand most of them.

Here's what I love about Captain Sandy. She's so calm. She's working the problem and she's not letting Bobby's hysteria or posturing distract her and she's not holding it against him, either. In lots of cases you'd see a manager avoid a subordinate they'd already disciplined, but she's right in there next to Bobby, not making it awkward at all. Dig.it

It's time for the guests to leave, four hours after they were supposed to and 7 hours after the Sirocco was supposed to be moving, time for a goodbye lineup in the main salon! Mr. Skin gives a great speech, I don't know if it was because they called Captain Sandy a badass or that they were so impressed with the nudie t-shirts, but I ended up quite liking Jim McBride but that's no surprise once I looked him up. This is what he do; he charms people on radio shows and makes creeping through frames of film to find celeb wobblies seem fun and not gross.

ANYWAY, there's a tip envelope, but I couldn't get a good look at it! Imma guess $20,000 because it was a slightly longer stay than the last and they REALLY liked those t-shirts.

Everyone gets a snack and then the crew is back to work, just no longer having to look pretty. Bugsy calls her mom and cries, but isn't coming home. Lauren's finally figured out that crying about Bobby AGAIN is making her look like an ass while Bugsy is showing off some major professionalism; she stops Bugsy to apologize and still makes it about her. I mean

The girls go swimming while the crew continues to work, we got 800 shots of the back of Malia's swimsuit bottom, what there was of it anyway. That was TINY! Adam and me think she has a great bum and almost all of it was on display. Not one person was complaining.

Captain Sandy is starting to get stressed out, now the lines they've been using are tangled in with the chains and they might have to cut anchors. If they cut the anchors off, they'll lose the yachting season, because it's illegal to pull into port without anchors, so she's not leaving them. We are leaving, though, this episode is done and we never even got to find out the tip! Come ON!! Boooooo

Until next week, keep your stick on the ice and your boat off the rocks, yo.Cheers