Woot! It's been a month so it must be time for RuPaul's Drag Race again, all right all right all right! Last week we had a cliffhanger; a final contestant was bring brought back and whomever could it be?? Come thru, henny!

Oh. It's Cynthia Lee Fontaine and her bloody cucu

Why it gotta be blue?

Oh. Sorry, she's back and she's in remission from liver cancer, feel better lady! I love how Shea Coulee wastes no time breaking things down: is this bitch back for REALLY reals? She is indeed! Shea is not happy.

Sweet baby jeebus I know the gurls have already been dragged for their makeup on social media so I won't go far, but can Ru get a Proactiv IV installed stat? Looks like PMS hell up in here.

Peppermint and Kimora Blac are already over Cynthia and her cucu (WITH YOU); especially since I'm pretty sure I can see Kimora's ass from here.

Next day and the queens have the cutest walkin!

Valentina is sooooo prettttty! In and out of drag! She reminds me a little of Rebecca Glasscock in season 1 but even prettier.

Time for RuMail! She's their biggest fan! Well, one of them, anyway, the others are losers

And then Lisa Kudrow walks in and everyone loses their minds

Hahahahaha I love these ladies; hearts on their sleeves, every one. Lisa does a line from her show The Comeback; did you know she's the reason Ru says "hello, hello hello!" everytime he enters the workroom? Now we all do!

And then she's gone, which was...random. And they're into the mini-challenge. Guess who wanted to be a cheerleader while young? NO, GUESS??

Cheer Battle woo hoo!! And it's the main challenge, there's no mini-challenge?

Confession: I LOVED Bring It On but the sequels sucked arse. But I'm A Cheerleader was great!

Nina Bonina Brown and Cynthia are the team leaders, they choose:

Nina: Shea (course! she came to slay after all), Alexis (sooo purty too), Aja (unrecognisable out of drag), Sasha, Jaymes (who she calls an underdog, ohhhh, but then Cynthia calls that community service and it isn't funny any more, if it even was. Huh. Cynthia, you just got there, chill, bae) and Charlie Hides

Cynthia: Kimora (because Cynthia is all about that bass, no treble), Eureka, Farrah Moan, Peppermint, Trinity and gets Valentina as her last pick.

WHY didn't anyone pick Valentina?? Have you not seen how gorgeous this girl is?? She has presence, betches! Out of drag she looks like a brunette Ricky Martin. Eureka thinks its because Valentina has only been doing drag for ten months, but I question that anyway. I've seen some of dose huntys that have only been doing makeup for 10 months, you can TELL. She shrugs it off in interview, this team got the SUPERSTAR.

Team strategizing time, Team Glamzons has a list of adjectives to chose their roles from, Aja wants Sassy! They push Jaymes to choose early, he needs to shine. He wants Floozy, not Snoozy, but so does Alexis Michelle and she's not backing down. The other queens talk her into trying Snoozy, but she's not happy about it. Her skin is glorious, yes?

Is it too soon to call First Going Home?

Even AFTER they switch back with Alexis being Floozy and Jaymes taking Snoozy, she messes it up. Gurl. Everyone is cheering (heh) for Jaymes, she's just gotta step that pussy up.

Rehearsal time with Don Palange! He's there to teach the queens (including Cynthia and her shaking cucu) how to roll it out cheer squad style! It has tumbling, jumping and stunting and Eureka forgets how to breathe.

Farrah and Valentina are the girls hoisted into the middle, Farrah's freaking out by Valentina's faking it until she makes it, henny! Smile! Trinity is next and she basically screams 'NOT THE FACE!!! NOT THE FACE!!' all the way through.

But Kimora's kind of a Debbie Downer anyway; she doesn't want to stone anything and it's like she doesn't know she's a drag queen! I am friends with THE awesome Irish drag queen Onya Becks on Facebook (LIKE SO IT'S REAL LIFE) and she stones EVERYTHING. It feeds Valentina's and Eureka's souls.

There's a weird vibe in the workroom; I don't remember so much negativity between teams before. Kicking asses? Gurl, this is a victory lap so the world can see your Charisma, Uniqueness, Nerve and Talent, don't get it twisted.

Trinity is weirded out by Valentina praying to her Catholic virgin candle? I don't know, I'm a heathen, but Valentina treats it like her drag mom. Which is not at all what a drag mom does; who taught you MAKEUP, Valentina?? A candle didn't!

There's something about Valentina; I can't quite put my finger on it. Stagey? Breathtakingly beautiful, but almost on a two second delay, do you know what I mean?

We're at Makeup Confessionals ladies! First up is Peppermint; who actually was a cheerleader before in high school. She was captain of the cheerleading squad even, but it wasn't with tumbling or any of that shite, just clapping and steps! She got badly gay-bashed by a homophobic member of the basketball team but turned it into a positive experience. Awww, Pepp! All the pictures of her from high school look VERY different, she must have had a lot of work done to her face *coughTrinitycough*

Now it's about Cynthia and her liver cancer diagnosis, which made her sad. I'm trying to focus, because cancer is no joke, but she's putting on foundation and she hasn't shaved or glued her brows so I'm distracted.

And it's time for runway!!! LOOKIT MAMA RU!!

I am telling you: nobody does it better. Nobody

Whew, Michelle's got her bewbs out again, I can relax. Ross Mathews is there too and so are the B-52s! I can't listen to their music without my left eye twitching (SO OVERPLAYED) but they look awesome! 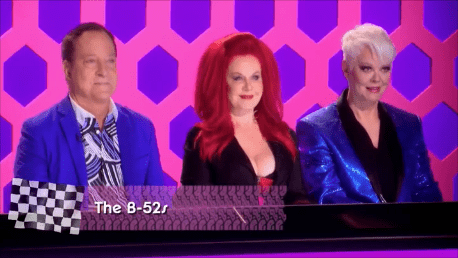 Russ has the best lines so far; "smells like queen spirit! I'm literally gagging" and how come he can't always be on here? I hate him on E! but he's just fab on Drag Race.

Let's get ready to wrassle!

Eureka did a cartwheel AND a flying bagina pound, wooo hooo!! Go big girl!! The tumbling is hilarious, Valentina and Shea turnt it oot! The end pyramid was fun 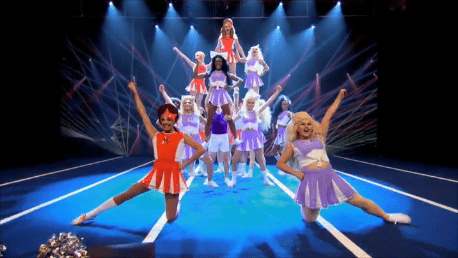 Critiques!! Nina, Alexis, Sasha, Aja, Cynthia, Farrah, Peppermint and Eureka are all safe, who were the top and bottom 3?

Charlie: forgettable - Bottom, but Ross gives her props for her gorgeous runway

Jaymes Mansfield: Michelle compliments her padding and then reads her for literally everything else. Bottom but we knew that

Valentina: gurl, you know she killed it. Ross said it best: you look for her. She's the one you watch. I'd be surprised if she doesn't win the season or come super close. Top

The judges ruminate between squirrel friends after, the only one that stuck with me was the read on Kimora. RuPaul thought her lack of editing of her look meant that Kimora didn't know how to tell a story and I think that is so interesting. True, obvs, but how many hookers have we had on this show throwing accessory on top of accessory without realising they were killing the cohesiveness of their message? *coughJoslynFoxcough*

I call Jaymes and Kimora in the lipsynch, Shea or Valentina to win it.

Woot and I'm right, Valentina wins and Jaymes and Kimora are lipsyncing for their lives. Ooh I'm worried, they're lipsyncing to Love Shack and no way Kimora OR Jaymes knows the spirit of that song. Let's see if they can turn it oot

Oh jesus, we've got two sleepy Pointer Sisters. I mean, Kimora looks cute, for an aggravated sex worker, but it's no bueno. No bueno at all.

Kimora gets to stay, shantay, Jaymes sashays away and we all saw that coming.She reminds us she's human before she sashays and you'll be fine, Jaymes. Mama Ru knows what she's doing and now we all know you!