Well well well, welcome back to Car Share where THEY PUT RIGHT WHAT WAS MESSED UP OR WE RIOT, amirite?? I've heard good things about the finale, though, so I'll stop shouting and reserve judgement until the end. Let's get going, I loved this show and have been looking forward to this for ages!

John (Peter Kay) listens to both a carpet commercial and most of a "Love Juices" advert ("I'm tasting them right now!") when he pulls up in front of Kayleigh's (Sian Gibson) house, but something's wrong! It's dark! Why is it dark? They can't be driving to work if it's dark.

Oh it's early, not late, and he's dropping off an envelope for her, intercepted by her brother-in-law Steve (Gill Garvey). John checks, Kayleigh's heart-light is still in the window, but not lit. Steve hopes it'll cheer Kayleigh up, she's been a mopey muppet.

"Owner of a Broken Heart" by Yes keeps John company as he drives to work, reading the texts he's sent to Kayleigh since she famously walked out on his emotionally stunted arse.

He looks so sad, I can't stand it!

Kayleigh's not looking much better, but at least Steve gives her the package right away, now covered with smudgy fingerprints.

John puts his cell on the passenger seat, opening it up to the wallpaper of their Harry Potter costume selfie, while Kayleigh opens the his present on the bus. It's a walkman, and the walkoff was only yesterday??

Awww, he's recorded a song for her! In one night? It's..."Come Back My Car Share Buddy" or maybe "Won't You Let Me Be Your Ride" and then we're in a black and white video with John singing and hahahah I think Take That are there too! Did Robbie Williams get skinny again? Some highlights

Kayleigh texts back, she loved it!

They smile at each other, we're back on the road, baby! "This is deja vu." "I knew you were going to say that."

She loved the song, it's as good as any Gary Barlow (had to look up, was in Take That! Did I guess right above? Edith??)

She encourages him to share the song with the world, he warns her not to go releasing it on Twitter! That's private! Already they've lost the point, the bit about liking each other. Honestly!

They talk a wee bit, it's just that John got a bit scared, things were moving too fast. But as Kayleigh says, change is everywhere, happening all the time. You roll with it or you miss out. And if it's not worth it, then LEAVE IT ALONE. Half-assed is worse than no-arsed, I tell you.

But what if she got to know John and didn't like him after all? But course she knows him, she's seen him at his best and at his worst.

He thinks the world of her.

She will wait for a bit, but she doesn't want him fobbing her off! So they're car sharing again! Why would she want to go with anyone else, when she can stay with him and have all his babies?

All right, she's joking! But she's picked out a wedding dress and damn right she has.

After work, she suggests they go to a wedding together, stay over? *wink wink* THIS IS HER TAKING IT SLOW, IZZIT?

Wedding chit chat follows, Kayeligh's gotta diet (for...someone else's wedding...) and then literally picks apart the invitation, flicking glitter and (possibly) googly eyes everywhere. And THEN, THEN the poem in the invite, it's "Wrecking Ball"!

Kayleigh tears into John's invite next, surprised to see that he's been invited to the ceremony as well. How well does he know Donna?

*tension in the car*

John worked with Donna's mum and even visited her mum in the hospital when she was dying, I'd say that was pretty close. Not close enough to notice that she got her boobs done 5 years ago, apparently covered under depression by the NHS.

The groom-to-be asked Kayleigh out before Donna, she didn't like him because he was drunk and lech-y. It's adorable watching John pseudo-flex about protecting Kayleigh's honour - this is a woman who can absolutely take care of herself.

Some random talk about people they hope don't go to the wedding and then she suggests his band Compendium play at the reception! Okay, she doesn't call it Compendium, but that's what she means!

Kayleigh's been listening to his song all day on her Walkman, sorry, HIS Walkman, the song was the gift, she's got to give the Walkman back.

How about they grab some coffees and muffins, Kayleigh's treat?

*we all know that Kayleigh does not actually pay for anything*

Turns out, Kayeligh's only got half the money to pay for the food, why doesn't John put it on his card? he's not doing that, he's not some cheese-eating highschool boy! They scrounge and scrounge in the car for the rest of the 5 pounds, but they drop the last 3 2p coins under the car. John reeeeacches will all his arms under the car...

Popping up with a red spot on his face and pays with his card as people honk behind them.

Stopped at a light, Kayleigh spots a hedgehog in the middle of the road and leaps to save it while John shouts "WHAT HAVE I DONE NOW??'

She runs back across; an impatient motorist trying to drive around John swerves into another car while trying to avoid her. John sits, stunned, until someone else takes his door clean off.

They're on the bus. Kayleigh pull's out John's Walkman and

Yay!!! Awwww, good ending. I will take. I read that Peter Kay hadn't intended to make his show a romcom and I get that, but it was just so sweet! I was completely caught off guard when it ended how it did, I hadn't realised that was the end END and let's just say...I was not ready to say goodbye.

I love how they end up on the bus, sharing headphones (which I thought was gross until I had kids and I realised that was practically hypoallergenic compared to what hooligans can throw at you) and equal! He's not driving, she's not beholden to him, he doesn't have to look at the road and she doesn't have to wait to know how he feels any more! Squee! I did very much like.

One more time, for the last time, the best signs of the episode: 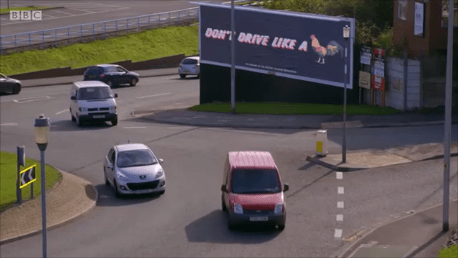 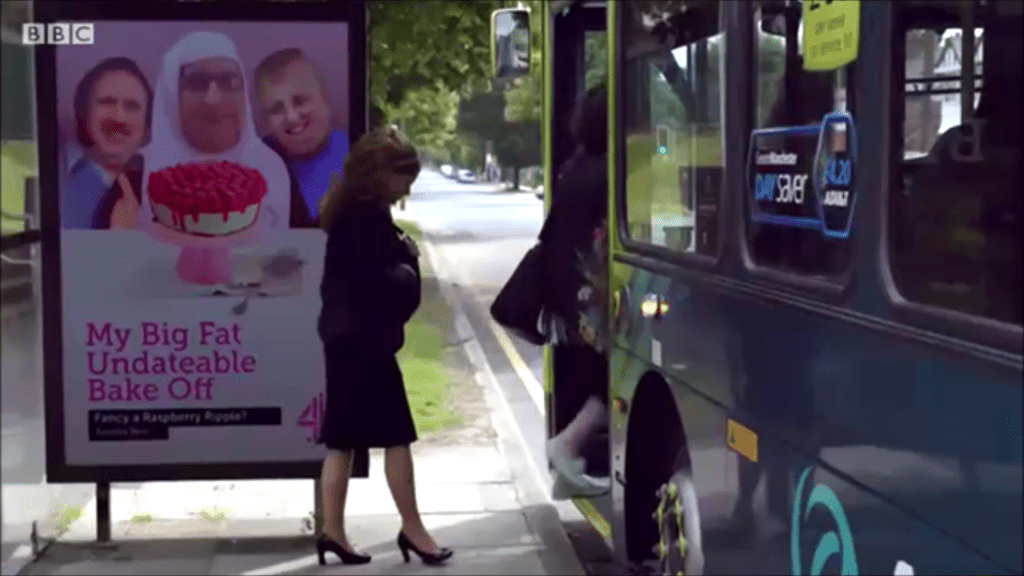 I missed a "Lost Boys - have you seen us?" but it was awesome! Thanks for reading along, and thanks again to EB on The Twitter for the recommendation! Cheers!