Hello fellow Canucklaidians! I found Cardinal to be as compelling to watch as it was to read (if slightly less poetic), let's see how our mystery is rounding out on characters on S1:E2 Delorme after the break.

Speaking of bosses, Noelle Dyson (Kristen Thomson) is outside explaining to Delorme in no uncertain terms that whatever she's investigating on the side for the Mounties will have to wait until Cardinal wraps up this here serial killer. Malcolm Musgrave (David Richmond-Peck from Orphan Black!! Or, well, he WAS) has Delorme checking out whether or not Cardinal's is dirty.

Cardinal's gotta go to Toronto for the autopsy (I AM SO EXCITED I GETTA SEE TORONTO! I love Toronto! Hi sestra!) and Delorme horns her way in, she's got half an hour to pack.

That's half an hour to grab some stuff and say goodbye to her Josh (Alden Adair), who's after her to go spend time with her family. Some tense/awkward dialogue later, she's gone and also: not pregnant so they're gonna keep trying.

The drive with Cardinal isn't a whole lot more comfortable, John tries a little but but shuts down completely when Delorme asks what his wife Catherine does. She basket weaves? Nunya business, Delorme!

Fine, Delorme will just talk about the exact time Katie Pine died then. Katie Pine is the first body that was found, Cardinal had spent weeks (and apparently far too much money) trying to find her before being booted off the case, which was then closed. Delorme did the math and thinks Katie had to be killed between November 8 and 11, which means the killer had to have kept her alive for a week. Yerk.

Cardinal and Delorme banter a bit at a gas station before he heads in to get coffee; he catches her rifling through his bag (two cell phones? One looks pink like the clones'!) and I gotta say: that's pretty amateurish for a detective. Pfft.

Cardinal and Delorme make it to Toronto in one piece to be met by Dr. Len Torres (Ali Hassan) who thinks he's a laff riot and will be performing the autopsy. Just like that I remembered we're gonna see some poor teenager all messed up, I think I'll watch this part through my fingers.

Oooooh okay, they're not doing that, they're leaving poor Todd wrapped and using the xray to figure out what happened to him. Thank the gods and wee fishies.

I think we found cause of death 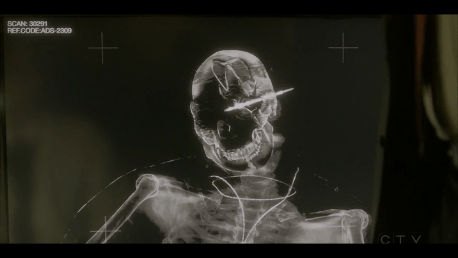 Oh damnit, I spoke too soon. They're going to do it off the scan now, real body time. Totally watching through fingers.

There was a weird smudge on the kiddo's head that they couldn't make out onscreen, that is bunches and bunches of audiotape wound around his melon. Could that be useful? Ah jaysus, they've got the screwdriver handle, that's what was broken off in the picture above. So much torture.

Delorme and I call it quits right then.

Cardinal tells Delorme about his first time watching an autopsy, he did all right with the subway jumper until he saw litter embedded in her cheek. He sends Delorme back to the hotel to wait for the body to thaw, he'll be hanging out with his daughter, who's managed to find time for him. He pulls out that pink phone, calling it his "daughter hotline" and I bet Delorme feels like shite for snooping.

He meets Kelly (Alanna Bale) who asks after her mom but clearly has her own anxiety issues, as Cardinal insists on immediately inspecting her mostly unbitten nails.

(THEY'RE ON COLLEGE STREET!!! WOOOOOOO)

Delorme interrupts with a phone call; the techs have found something on the tape. Kelly gets to meet Delorme (she's hot) before skiddooching off to the U of T(ish) and reminding her dad to run again. He likes it.

They think they've got the murderer on tape, because there's also a little girl talking. There's not much I can hear on the tape but they think someone is taking pictures and just as we're listening very closely to all the white noise a man says clearly "look at me Katie" and we all jump back and look at each other. Then Katie cries out in pain.

So now we know for sure that the cases are connected but not why the killer would deliberately tell them that.

Cardinal explains to Delorme back at the hotel (with impossible room numbers, 480 would never be next to 481, they run odd and even on separate sides. Whew, I feel better now that my inner pedant got some air), Cardinal blurting out his answer to Delorme's question about his wife: Catherine has bipolar disorder. Delorme tries to apologize but John's already gone.

Delorme picks up Cardinal as he's trying to bury that poor dead racoon in his yard; the frozen ground says nahhhhh and it's into the freezer for Rocky R. Racoon. They're off to notify Todd Curry (Dylan Colton)'s dad and ask him why Todd disappeared after telling his parents he was off to see his uncle. Lise thinks that's odd, because a runaway wouldn't bother with an alibi.

They ask the original detective on the case, Peters, but he's too busy being a smug arsehole to Delorme to take her questions seriously. He mostly stares at Cardinal as if to say "do you believe this broad?"

Trevor Curry (Robert B. Kennedy) wants to know how his son died. Cardinal tries to deflect, but Trevor would really like to know. Oy. It's Delorme who breaks the horrible news; Todd was beaten, tortured and degraded. They don't even know which killed him because his injuries were so extensive. Trevor's face.

They search Todd's room, he left behind a laptop and all his things, this kid wasn't going anywhere. Cardinal thanks Delorme for her help with the notification, he used to be good at that.

Cardinal briefs the team about what they know, they're going to have to widen the search to up to twenty years previous and include any case involving torture. Constable Fox (Eric Hicks) yawns at the back of the room (kids have croup, I get it), Cardinal tells him to keep it in this room. People are grieving. They're scared. They don't need to see cops laughing and yawning and being human and checking Facebook at lunch.

Oh hey, Josh has come to see Delorme for lunch, but she can't make it. After he insults her new partner (Lise said you look older than your years, you don't look THAT old), she goes to get her jacket to walk him out, leaving her new old-looking partner with her awkward Josh.

Constable Fox tells Delorme about Catherine, it was he who got the call to deal with a delusional upset person trying to walk on the ice. Cardinal had to put Catherine in a bearhug to get her off the ice and that reminds me that Catherine called Kelly at school about a planned trek out onto the ice, it must have been around the same time. This is why big-city decorated cop John Cardinal is in tiny Algonquin Bay.

It's very much in vogue to use medical terms like "I'm feeling so bipolar" or "my OCD means you must eat that red M&M" so it's easy to forget that these are actual medical conditions and honestly: can be scary af.

We see Lise at home with her hair down for 30 seconds and then a fight with Josh sends her off and running with dat bun again. He told her mom that they're trying to get pregnant  and I'm sure THAT WON'T LEAD TO ANY EXTRA PRESSURE.

Jerry Commanda (Glen Gould) has been talking to people in the community, Wendy (Racine Bebamikawe) saw a man on a snowmobile staring through a window, and now he's asking the man who found Katie's body to take care of some dirt from where Katie was last seen to....I'm not sure.

Delorme is smoking in her car at 2 am when she sees Cardinal zip by alone. She follows him immediately and calls Musgrave, who tells her to back off right now, soldier! It's the middle of the night and dark and snowy besides, it would be very easy for Cardinal to spot her headlights following him.

Delorme ignores orders and tails Cardinal to the casino, where he walks out with a big wad of cash. Delorme is a terrible liar for a cop, but still manages to ascertain that he made a bunch. But. He JUST walked in there? Laundering money?

Delorme explains to an angry Musgrave the next day, who is pissssed she Jenny-came-lately into a years-long investigation and almost blew it wide open.

Ahhhh, it was black market chips Cardinal was buying from that guy in the middle of the night, then cashing them at the casino.

Musgrave literally backs Delorme into her car, hitting her with the door and the only good thing about that was her hissing "asssti" which is a French Canadian curse word meaning "WHAT THE F*CK??" He implies there's a promotion in it for her if she does a good job, but he oozed all over while doing it and I was wondering if she got drunk one night and made an extremely unfortunate mistake.

Delorme gets kudos from Cardinal via Dyson and goes outside to find him staring at her car in the parking lot. Ohhh he recognises her car and asks why she left financial crimes anyway? I've mentioned before that Delorme is not a very good liar.

A young man with a guitar gets off the bus late at night, a ginger bearded stranger watching him closely. We see the young man being approached later in the bar by a young woman with a burned face, the bearded ginger stranger lashes out and is super randomly mean to the burned woman for no reason. Edie Soames (Allie MacDonald) thanks the young man Keith (Robert Naylor) for coming to her aid and asks if he'd please walk her home? She doesn't feel safe with that guy out there. Keith takes a soft pass, he just ordered this drink, but he can call her a cab? She declines.

She walks out and...gets into the van with the bearded ginger stranger, who we will now call Eric Fraser (Brendan Fletcher). He mocks her, aww, did she really think this guy was gonna walk her home like a gentleman? No matter, she slipped him drugs while Eric was distracting him with insults, so the game is on. Eric offers Edie a chance to back out, they can always leave now, drive away without ever seeing Keith again.

And we're out. Hmmmmmm, it's impossible to see a man and woman killing team and not think of Karla Homolka and Paul Bernardo, but it is different in that we're seeing both female and male victims of varying ages and the male half of the couple doesn't seem to be the leader. We shall see.

I can't say anything good about David Richmond-Peck as Malcolm Musgrave, I can't tell if he's directed poorly or his acting choices are making him impossible to watch onscreen. Either way, I'm hoping it shapes up.

I love seeing a Canadian drama done so well, I mean, it has a lot of room for growth (see above) but there are more good things than bad and the story is compelling. I dig Delorme's pushy young female cop character, we're just veering close to caricature in some of the other roles.