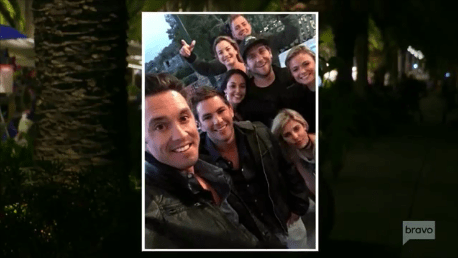 This is it! The end of the second season of Below Deck Mediterranean and as we leave this crew behind (except Hannah, girl is attached like a lamphrey eel. Oh and Bobby, he burnt some fire station bridges too. GEDDIT??), let's reminisce about their heady journey into pop culture semi-stardom as Bravolebrities. Rolling S2:E14 Con-Text is Everything after the break!

Okay, so we all know deckhand Malia White has been in the middle of a love triangle starring her, chef Adam Glick and bosun Wes Walton, right? Last couple of episodes we found out that she was playing both sides suuuuuper hard and while I'm all ehhhhhh, Adam is most certainly not.

In fact, he's gone into his and Wes's room (YEAH!! They share a room!! How gross is that part??) to show Wes the Texts of Doom and now we getta find out what Wes thinks of Malia liking more than one person at a time.

Wes just wants to push through; they all have twelve hours together left and he just wants to not see you, okay, Adam? Just. Just go.

Second stew Christine "Bugsy" Drake went ahead and explained to chief stew Hannah Ferrier why and how much she sucked, Hannah's showing her what a good chief stew looks like, so there!

We've got Jerry Thiebeau, a NFL placekicker named Dean Biasucci and half a dozen yacht girls aship with our intrepid crew for the last time this season. I wonder how deckhand Bobby Giancola dating one of those ladies is gonna go over. Paula Manzanal has a fantastic bum, a professional grade Tinder account and the keys to Bobby's heart.

Paula and her friend Elise are heading out early the next morning, Jerry asks Hannah to arrange for someone to take Paula shoe-shopping before supper because that totally wasn't planned out for dramz.

Bobby reups his cologne and dries his hair, he's ready to go!

Bobby's trying to herd the ladies gently back on the boat, but the hangry dudes are already furious that they've had to wait so long. I bet Bobby bears the brunt of that anger, especially when two women don't make it back with the other four.

Jerry perks up a little when he starts getting food (one giant prawn as a shrimp cocktail? I DON'T UNDERSTAND), but he's still mad at Bobby, grilling Paula as to why she likes him. One of the women says they all love Bobby, he's the only one who doesn't. Hannah pipes up that Jerry's opinion might be the one that counts, Jerry loves it.

Primary Jerry would like to speak to Captain Sandy Yawn, please.

Primary Jerry doesn't like that Bobby lost "two girls" (grown women) and he feels as though Bobby is "taking his role." Paula rolls her eyes in frustration, Jerry, honey: let's just say unless you paying, they straying.

Bobby is stuck on passarelle watch (??), good thing Paula also has to stay in since her and her roommate are leaving early!

Bobby and Paula will be staying on the boat with Bugsy; everyone else, including crew is heading to shore to party.

Jerry takes Bobby aside and tells him he's disappointed in his choices, but he still loves him and he wants Bobby to come party with them. You know, so Bobby isn't left on the boat alone with Paula.

Bobby is pisssssed but I'm impressed he didn't laugh out loud when Jerry said maybe he or his friend Dean wanted to date Paula instead. You know people aren't like shotgun, right, Jerry? You can't call dibs and being there first doesn't mean anything. Just ask Adam!

Hannah's made some arrangements at the club; I don't think Primary Jerry thought this cage ball match through

He does get in a jab, shouting "too bad Paula's not here" in Bobby's ear. Bobby's ready to gtfo.

Poor Primary Jerry is left all alone in the hot tub at 3:30 am, the girls long gone to bed. Then he falls asleep.

Bobby and deckhand Max Hagley rescue him (drowned guests leave shitty tips) and it's off to bed for everyone but Paula, who leaves with super high boots and all of Bobby's saliva. They're actually really cute together and she seems sincere, I wish them luck!

It's the best time of the episode, it's Tip Time!! Primary Jerry says "sometimes the actions of one have consequences for the many" and we all hold our breath and stare at Bobby until Jerry finishes that sentence "that's not how I roll."

Awww, Hannah got the MVP tip this time, like Danny before her last season! She should do some kind of rude dance in Busgy's face but I'm sure she'll be too busy chilling in her bunk texting Jason Ziegler to have time.

Hannah doesn't have to hand over her tip immediately like Danny did, though, but she shares it out equally with everyone anyway. Goodonya.

HAHAHAHA Hannah has a shirt that says "RESTING BAR FACE" awwww, I wonder how Kate Chastain is doing?? Not long until OG Below Deck and her rbf is back!

Last supper together as a crew, last time to sit in separate rooms gossiping about each other!

A lovely supper with Captain Sandy later, time for green shots and selfies!

Hannah throws back her drink, this is clearly the best time to talk to Bugsy about her assertion that Hannah hasn't been pulling her weight this charter season. Clearly.

Bugsy stands by what she said and swears that the whole crew thinks the same thing. They split up and return to their corners, Bugsy grabbing Wes and second stew Lauren being dragged into the fray by Hannah.

Bugsy rings the bell before Hannah's expecting it and now we have a tag-team match.

Okay now remember: Lauren doesn't like conflict. She comes right out and says that she wants Hannah to like her more than she cares about Hannah not doing shite as chief stew this season. Bugsy will not be dissuaded, Lauren said those things all on her own, there was no brainwashing required. Hannah recommends that Bugsy not take a second stew job again and I could not agree more. Like, two hours left guys! Ride it out!

Wes takes Malia aside to ask her about Adam and his Texts of Doom, he's surprised to hear about Malia and Adam knowing each other before coming on board which makes him the only person in the world right now. Honestly.

Malia says nothing happened with Adam, all Wes wants to know is that she likes him, regardless of what happened before. They smile and it's sweet, but you can feel the ghost of Adam's bruised ego hanging over their relationship.

Adam explains the whole thing to Hannah on the boat, she calls what Malia did cheating on Wes and whoa whoa whoa. It is not cheating if they were not exclusively dating. Malia barely knew Adam and what she did find out about him was just alllllll red flags.

Like the fact that he told her he loved her after four days. Yikes. Wes and I aren't sure about that for two reasons: Wes is worried Malia and Adam had more of a relationship than Malia is letting on and I am super worried that Malia boarded a boat with her stalker.

Malia's had enough, she storms up to the galley the next morning to confront Adam directly. Yes, she had feelings for him before the boat, but they changed. And yes, she was wrong to keep texting Adam after starting to like Wes, but she was intimidated and didn't know how to admit that she's lost feels for him. Adam doesn't really answer, except to make snarky remarks, so I'm sure everything will be fine and he will leave Wes and Malia alone now.

Except it's not really funny, hey?

Max is the first to leave, so many hugs! He can't wait to get home to his awesome chick Emily, but he'll never forget his bromance with Bobby.

Lauren is next to de-dock, let's look at her finest moment:

She thinks she's grown as a person, a people pleaser no more! Now Wes is going to leave, but he has laundry to do yet so Adam gets one more shot in. He tells Wes he and Malia were physically involved, which is supposed to explain his completely creepy and irrational behaviour.

Wes wins all the lollipops when he defends Malia's ownership of her own choices, they weren't exclusive, so whatevs. Adam presses a bit more and honestly. I hope any woman Adam dates watches this entire season, all of it.

Bobby makes up with Hannah and then heads out, muscles flashing in the sunlight.

Adam is next, he learned to read the preference sheets this season! Deuces

Malia finds Wes in the laundry room and finds out what Adam said about her, but Wes doesn't really want to talk about it. "It is what it is" and we're on to Hannah and Bugsy's frosty goodbye. Ladies, next time lemme get my lemonade so you can chill it the eff oot! No love lost.

Hannah and Malia have an extremely awkward goodbye, they don't know how they feel about each other!

Malia leaves next, after a good talk with Wes on deck and some smooching even!

Awwww, they lurve each other! Has it been four days?

Wes leaves with all of Captain Sandy's respect, so nothing is left for Hannah but mouth kisses and shade.

That's okay, Hannah's going to search out some therapy while she's off, maybe some pants that are pants too! Just an idea.

So that's it you guys! We've got no more Below Deck until September 5, WHAT ARE WE GONNA DO UNTIL THEN?? If you have any recapping suggestions, I'd LOVE to hear them! You can tweet them @gingesbecray, you can email me at gingesbecray@gmail.com or you can comment below. I dig it the most. Until the next show, thanks for reading along! Cheers