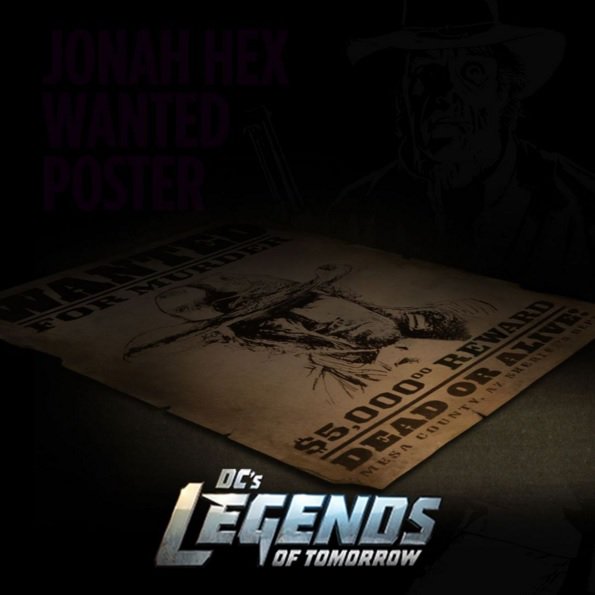 Jonah Hex and the Legends meet in the Wild, Wild West?

Oh man, this is either gonna be brilliant or horrible, so excited either way!

The Waverider arrives in the town of Salvation, Dakota, in 1871. They all suffer time sickness from travelling so far, even Rip. He tells them that there are things called fragmentations in the timeline, temporal blind spots that the Time Masters can't see. Salvation is one of them, and they can hide here for the time being.

Ray is super excited to be in the Wild West, but Rip tells them they have to stay on the ship. Ray wants to go and punch a few doggies and bust some broncos, and convinces the others to go a have a look around. He'll be kicking himself for the rest of his life if he doesn't go.

They suit up in their Wild West finest and era appropriate weapons, to be only used in extreme emergencies of course. Rip isn't coming, even though he dresses as though he loves the era, he's staying on the ship. They promise there will be no trouble, and do their slow motion walk in to town.

They head for the saloon, as you would, and straight for the bar, as you would. Mick and Sara decide to get in to a drinking contest, Sara promises that she'll drink him under the table, it's a speciality of hers. And Mick has been Chronos for a long time now and hasn't seen the bottom of a glass for years.

Martin and Leonard are playing cards, Martin's father was a degenerate gambler, and took him to tables as a child. He wins a number of hands and pisses off the cowboy he's playing against, and a gun is drawn. A shot rings out, and Martin clutches at himself. But it's not Martin who was hit, it's the cowboy, shot by Quick Draw Snart over there.

The entire saloon is now on it's feet, and Leonard defends his shot as clean and fair. Now, I would not choose either word to describe this rabble, and they react accordingly. An oldy timey saloon brawl breaks out, and people are going through tables, and into pianos left right and centre. A gun is fired into the air, and play time is over, and a shadowy figure states that if anyone has a problem with that they can answer to him. Um, and who are you now?

Jonah asks them where they're from, no actually when they're from is what he would like to know. He's seen this kind of thing before, so where is he, where is Rip? They take him on to the Waverider much to Rip's shock. Jonah tells Rip that his coat suits him, and that he was just minding his own business when these guys came in a shot a member of the Stillwater gang. The gang has been raiding the town for months, and they've just made things ten times worse. Ray insists they be heroes and save the town from a marauding gang of criminals.

Jonah takes Ray to see the Sherriff, who clears off when he hears Ray has experience fighting crime, not before making him the Sherriff of Salvation. Sherriff John Wayne, to be precise.

Martin heads back to the saloon and bribes the bartender for information on Jeb Stillwater, the leader of the gang. He agrees to help in exchange for some more greenbacks and heads off to find a map. Martin goes to the assistance of a damsel in distress, and learns that her son is ill upstairs, with consumption. Martin offers to have a look at him, as a scientist, and the boy appears to be at death's door. His mother took him to Salvation as a constitutional, to see the American West, hoping that the change of scenery would help. Martin tells the boy, called Bertie, that he needs to fight, and prove his mother and doctor wrong.

Shots ring out in the street, and it's Jeb and the Stillwater gang come to make someone pay for the death of his friend. Ray greets him as the new Sherriff, and tells him that whatever arrangement they had previously is over, and there will be no more raiding or killing. Jeb tells him he's outnumbered and draws his gun, but Leonard is on the roof and shoots the gun out of his hand. Ray points out the other guns aimed at them right now, and the gang decides to turn tail and leave. Woo hoo, running a gang out of town was totally on Ray's bucket list.

They all head back to the Waverider, and Jonah warns them that they're just poking at the hornet's nest. For time travellers they don't understand the future much, the gang will be back as soon as they leave. And Salvation will end up like Calvert, Jonah makes a point of saying to Rip. Rip asks Jonah for a private word, and the others ask Gideon for information on what Calvert is, turns out it's a place, or was a place, in Oklahoma.

Martin is later busted in the medical bay by Rip and Ray, where he's trying to steal medication. Gideon has unintentionally ratted him out, and Martin tells them that he's had Gideon make him up a synthetic version of the oldest known cure for TB. It's still 70 odd years too early for the era, and introducing new technology and information can have dire results. Just ask Ray, who left part of his suit in the 70's and nearly caused World War Three.

Martin tells Rip they know about Calvert, just not Rip's involvement. He tells them that he lived in Calvert in the 1860's on a mission, and loved the era so much he stayed. He was experiencing Time Drift, and forced himself to leave in order to see his wife and child in the future. They day after he left, the town was sacked and destroyed by a gang like the Stillwaters. Martin insists he has to help Bertie, that he can't live with the regret that he sees so plainly written on Rip's face.

Jonah comes in and tells them that Martin's intel paid off, and they know where the gang is hiding out. Rip still refuses to set foot in Salvation, and the others head off.

Martin goes and treats Bertie, but warns his mother Annie, to burn all the left over medicine and vials after the treatment is finished. Bertie's recovery is almost miraculous, and Annie can't believe how lucky they are.

Mick, Leonard, Jax, Ray and Jonah ambush the gang at their camp and Ray manages to capture Jeb. As they make their escape, Jax is clotheslined off his horse and captured. They have no choice but to leave him there, and hope they can negotiate for his release later.

Back on the ship, they decide that a trade is not the way to go, they'll be back where they started. Jonah tells them that they only way out is a quick draw at high noon, they win they get Jax back, they lose Jeb goes free. Oh, and they'll get shot and probably die. Ray volunteers as tribute, he's a decent shot with an air rifle. Rip is not pleased, but the others tell him that he's not exactly going out of his way to help, so perhaps he should kindly shut his cake hole.

Rip tells them that leaving the Wild West was the hardest thing he's ever had to do, he found the opportunities for heroism enticing. Jonah asks him a question that's been bothering him, would he have left if he had known that the Turnbull Gang would return to Calvert. Rip replies that he did know, he's a Time Master after all, and if he stayed he could no longer be one. But now he is no longer a Time Master, and he'll do the draw.

At high noon, they head out to meet the Stillwater gang, with Jeb still in their custody. He and Rip arm themselves, and take their places. After a lengthy staring competition, and much finger waggling, Jeb makes the first move.

Rip shoots from the hip and takes Jeb down. Jax is released and the gang runs for their lives. The Legends are suitably impressed, until a new gang strides in to the main street. It's the three Hunters, sent by the Time Council to kill them all.

Rip arms Jonah with a laser gun, and hands Ray his suit. There will be no holding back in this one, preserving the timeline be damned. Martin and Jax merge, and Ray and Kendra take flight. Mick and Rory are left to fight with old school guns, and they manage to take the Hunters down one by one. One tells Mick, as he is dying, that they still haven't won, The Pilgrim has been sent after them. A no one survives her, and their deaths are just a matter of time.

They gather themselves to leave, and Rip puts it to Jonah that the town still needs a Sherriff. Jonah tells him that he's not one for law and order, or the staying in one place type. Rip tells him to go well, and perhaps they will see each other again. See ya, Jonah, maybe next time you might get a chance to be more than just a plot device for Rip.

Rip tells Leonard that the people will forget, plus who would believe them anyway? Martin goes to check on Bertie, and finds out that his full name is Herbert George Wells. H.G.Wells. Astonishing, right Martin? Quite an introduction to science fiction there, Bertie.

Back on the Waverider, they all ask Rip what is next. Is there another fragmentation they can hide out in? Instead, Mick tells them about The Pilgrim, the Time Master's most deadly assassin. No one can escape her, she goes back and kills people's younger selves. And she won't stop until they have all been erased from the timeline.

Eh. That was kind of cool, but Jonah Hex was way under used. Hopefully they are just setting him up for a future appearance. He has so much more to offer as a character than just a outlaw cowboy. We didn't really get to see his marksmanship, or tracking skills and the only real mention of something from the comics was his enemy Quentin Turnbull. Anyway! On to next week! I see Captain Lance with a furry friend seemingly living on his head!