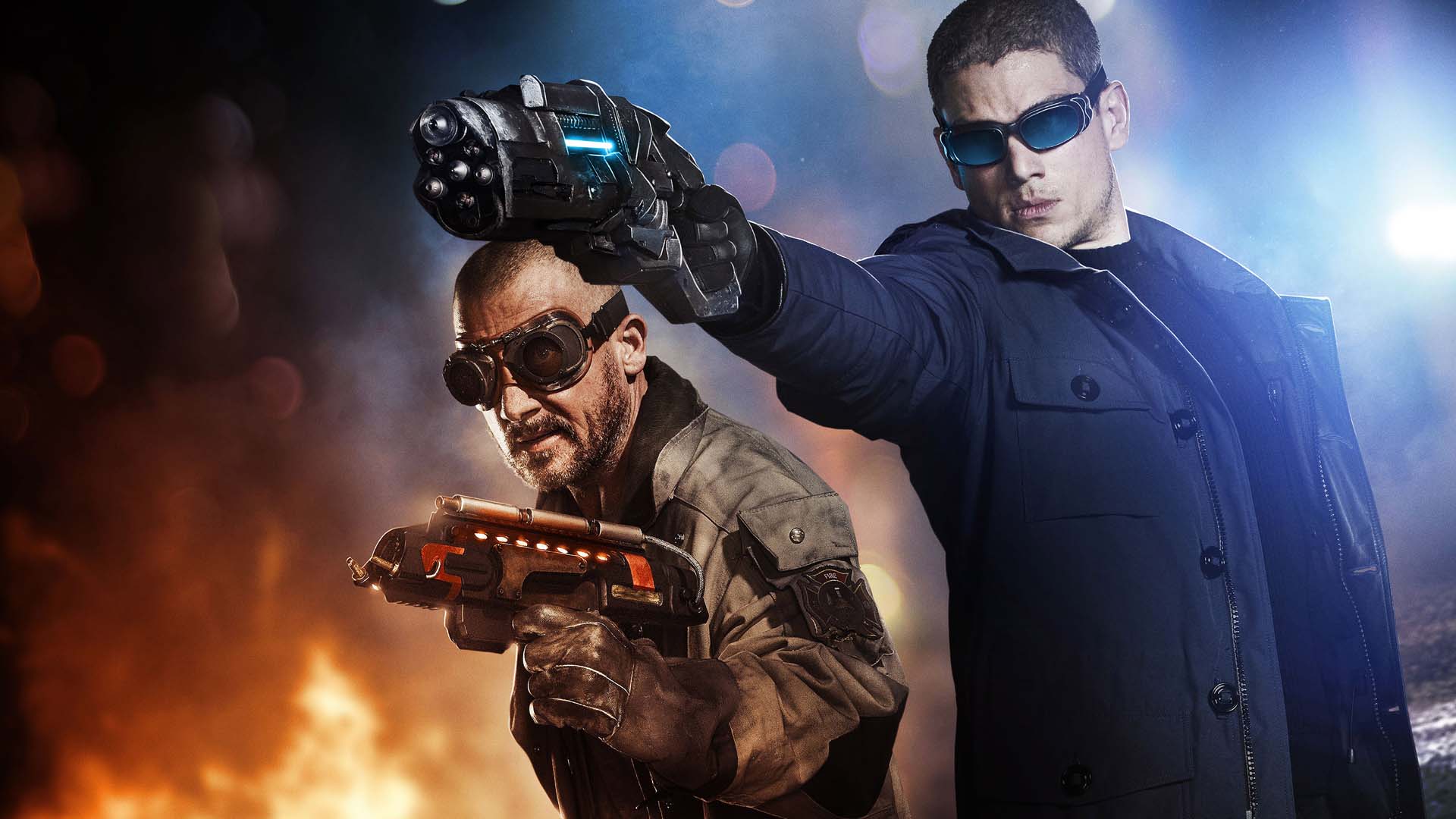 So, two episodes left to beat Vandal Savage and save the goddamn world. That should be plenty of time, right?

We begin with a flashback to the Legends being propositioned by Rip Hunter at the very start of their journey. He shows them the world in 2166 and leaves them to make their decisions. Martin tries to convince Jax to accompany him onto the Waverider, but Jax is not interested. Jax tells Martin to stick it, and leaves. Right on cue the current day Jax appears, and tells Martin that he's from the future and needs his help. The team is in trouble.

Martin, Mick, Rip, Kendra and Ray are prisoners at the Vanishing Point, and current day Martin is increasingly unwell. In order to maintain safe levels of nuclear energy he has to merge with Jax periodically, but Jax is gone and Martin is almost ready to meltdown. Mick is just waiting for the Time Masters to come and get him and turn him into Chronos again. And they arrive as predicted, but also take Kendra.

Rip is also removed from his cell and is granted an audience with Time Master Druce. First he needs to tell them where Sara and Leonard are hiding, or else. When Rip refuses to make a deal, Druce decides to show Rip the true scale of things.  There will be an alien invasion in 2175, and Vandal Savage is the only one capable of fighting them off, as the single ruler of the world. Without him all human life is extinguished. Rip thinks he's mad to believe that, but Druce has another thing to show him.

Leonard and Sara emerge from their hiding place on the ship, and he is ready to make a run for it and leave the others. Sara refuses to leave them, and also refuses to believe that Leonard is still like that. Even when he pulls his gun on her. They face off, and then the oldey timey phone on the side table starts to ring. Sara answers and it's Gideon! She managed to upload into the latency core when Savage took her off line. Gideon gives Sara and Lance the others cell location at the Vanishing Point.

Savage has Kendra prisoner on a time ship, and they're on their way to 2166, and to a date Savage has with Rip's wife and son.

Mick is being prepped to have his brain wiped and rewired back to being Chronos. He was the most feared hunter they have ever had, and they have much more work for him to do. The Time Master starts the procedure and Mick writhes in pain.

Master Druce shows Rip into the Oculus viewing chamber, the source of all their information on the Timeline. Only council members are aware of it and what it does. The Oculus gives them the ability to shape time as they see fit. Nothing that anyone does is of their own free will, everything is guided and preordained by the Time Masters. They've been helping Savage, but so has Rip. Everything he and the team have done has helped Savage along his way, they've been subtly redirected the whole time to get the Time Council the results they want.

Rip places his hand in the light of the Oculus and sees everything that has happened to them in the past, and also catches a glimpse of the future. Events as they will happen, no chance of changing things. The last thing he sees before ripping his hand away is the death of Ray. Druce tells him everything is preordained, including the death of his family. The Time Council ordered Savage to kill them, in order to give a purpose to Rip's anger and tendency to go rogue. They knew this would drive Rip to do the things he has done.

Rip returns to his cell, broken. He tells Ray and Martin that there is no hope, nothing they do will change anything. It's all been a giant waste of time. Ray refuses to believe it, but Rip tells him he saw his death. Martin decides it's time to be realistic, and Ray needs to accept that they are out of allies. Ray still believes in Sara and Leonard and is not giving up hope.

In Central City 2016, Jax and Martin are working on fixing the Jump Ship to enable Jax to travel back to the Waverider. Martin tries to get Jax to tell him what has happened, but Jax is reluctant to tell him too much about the future. He needs to stop being arrogant and only worrying about himself and get back to work!

Mick is still undergoing brainwashing and it takes several more blasts to the brain before he identifies himself as Chronos. Chronos' first mission is to find and kill Sara Lance and Leonard Snart.

Sara and Leonard have left the Waverider, and are making their way through the ship hanger placing charges on each time ship. Gideon manages to get the Time Drive back online, and they make plans to rescue the others. Sara takes the captain's chair and they time jump out of the hangar. Druce sets all available Captains and their time ships after them.

They all fire up their ships and prepare to time jump but the charges go off as planned. All the ships are being overridden by an external program, and each operating system voice starts to sing. The console lights flash in time to the music, and it's Love Will Keep Us Together by the Captain and Tenille. The very song that Leonard watched Sara dance to in a bar shortly after they met. Nawwww.

Druce orders that Rip, Martin and Ray be killed, they are of no use now the Waverider is gone. The soldier ordered to shoot them tells Druce that they have a location for the Waverider, it's in the present. And firing on the very cell where the team are being held. Leonard bursts in and takes out Druce and the soldier, his timing impeccable.

Or maybe not, as Chronos arrives. His Time Master buddy orders him to fire and he complies. But not in the way the Time Council wanted, he turns and shoots the Time Master. Then finishes him off with a boot to the skull. Mick's mind is much more powerful than they give him credit for.

They return to the ship, and Gideon welcomes them all back. There is however a slight problem, they are caught in a tractor beam and are being dragged back to the Vanishing Point. Ray comes up with the idea of using the tech in Chronos's suit to disengage the beam, and it works! Sara is still in the Captain's chair and blasts them out of there.

Back in 2016, Jax and Martin have been successful in repairing the Jump Ship and Jax is ready for lift off. Jax tells him that he has to make sure he roofies him to get him on that ship, it's the best decision he never made.

On the Waverider Rip and Ray explain the Oculus to the others, and that their lives have all been preordained. They decide their only option is to destroy it, and as the Vanishing Point exists outside of time, they may actually have a chance of doing exactly what the Time Council doesn't want. And seize back their destinies.

Leonard goes to see Sara and she is still pissed he pulled his gun on her. He apologises for being a jerk, and asks what she thinks of Rip's plan. She still feels responsible for all her actions, in fact they still keep her up at night. Leonard tells her it's the things he didn't do that keep him up. He thinks about what the future might hold for him, and Sara, and he and Sara together. She tells him that if he wants to steal a kiss from her, he better be one hell of a thief.

The ship heads back to the Vanishing Point, and the plan is to blow up the Oculus. Ray will deactivate the core containment supernova which should result in a very big explosion. They make their way towards the Oculus, but are intercepted by Druce and a team of guards. It seems this was all part of the plan too, it's a trap!

Druce orders they be killed, but before the guards can open fire another ship arrives and takes the guards out one by one. It's Jax in the Jump Ship! He hops out, and hopes he's not too late.

Rip, Mick and Ray head for the Oculus, while the others fight the guards away from the doors. Ray gets to work on the core, and Rip realises that this is where he saw Ray die. Ray tells him that if that's the case, that's okay. All his life he wanted to make a difference. He disengages the core, but there's a fail safe. Someone is going to need to hold it down in order for the explosion to occur. Uh oh.

Ray tells them all to go, but Mick is the one who owes these guys some revenge. He knocks Ray out and grabs hold of the fail safe. Rip decides to let him do it, and shrinks Ray down and puts him in his pocket.

In London in 2166, Savage has tracked down Rip's wife and son. Things take place exactly as planned, and he ruthlessly murders them. Has this all been for nothing?

Rip runs out and tells the others that they are leaving, Leonard asks where Mick is and Rip tells him. There's no way that Leonard's leaving him and he runs back in, and Sara follows. Leonard tells Mick he's not leaving him to die, and then asks for his forgiveness. He knocks him out with the gun, and takes the fail safe. Sara sees what he's done, kisses him goodbye and drags Mick out.

The crew are distraught, and remember him as a hero. Mick is stunned and has nothing to say. Rip asks Gideon to review the timeline, but that's not possible now that the Oculus is gone. There is no information, they're traveling without a map from now on. However news accounts from 2166 confirm that Savage has killed his wife Miranda and son Jonas.

Ray goes to talk to Mick and tells him that the Oculus has been confirmed as being destroyed. From now on in they have free will, and Leonard didn't die for nothing. Mick has killed Druce and they've destroyed everything, but he stills feels a need to kill someone for Snart. Ray reminds him that Savage is still alive, and still has Kendra and Carter.

Savage gets hailed by the Time Masters and they inform him Druce is dead, and the Oculus is gone. Savage is being cut loose, there's no more help they can offer him. Kendra starts to laugh, but Savage tells her that from now on he can do whatever he likes. He now has the ability to change the world.

Firstly, let me just say . . . WAAAAAAAAAH! I love Leonard Snart and his snarky pants. What is going on? The only positive I can see if that the Vanishing Point is outside of time; maybe his death is not really real? Wentworth Miller is contracted for Season 2, but has signed an amazing deal that allows him to be a regular guest across all of Greg Berlanti's CW shows (The Flash, Arrow, Legends). So we haven't seen the last of Captain Cold, but we won't see him as often. Next season Patrick Adams (Suits) comes aboard for a few episodes, as a mystery DC character, but HE'S NO WENTWORTH MILLER OKAY?? When does the Prison Break reboot start? WAAAAAAAH!