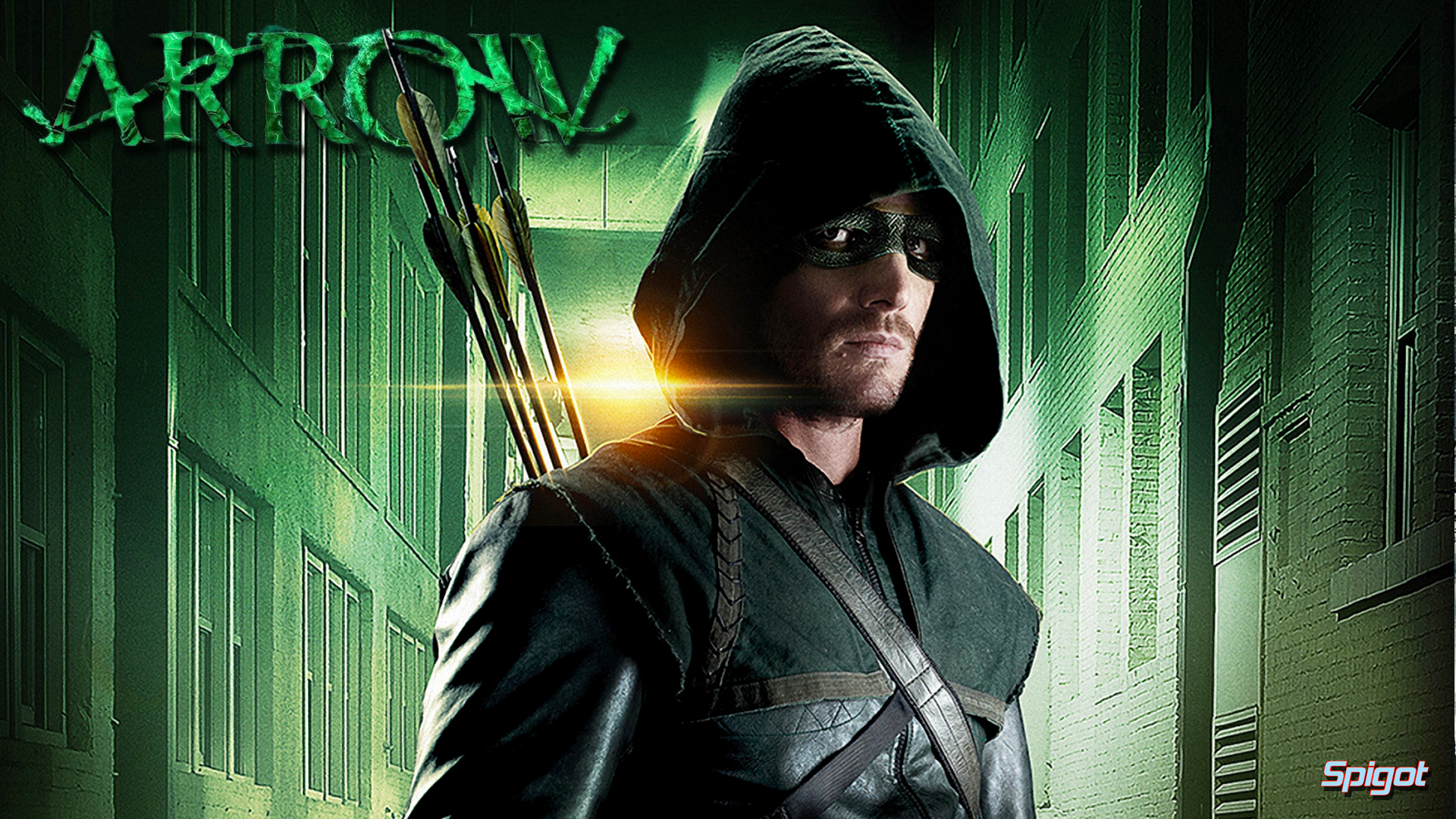 We're getting to the end of Season 4, and Damien Darhk is still making me type his bloody name! Time to put DD away, Ollie!

Damien Darhk has got his hands on Rubicon and is using it to arm all the world's missiles, taking over control of all their systems. Team Arrow has 21 hours of start up sequence time before the missiles launch, and need a world class hacker to override Rubicon. Felicity is a start, but you know who's the best? Her dad Noah, or The Calculator (worst evil villain name ever). He escaped Iron Heights during the riot, so they just need to find where he's holed up.

Oliver checks in with John, and tells him about the nexus chamber that Darhk must be using to make his magic. Oliver has a map and a theory that the chambers are found on ley lines. If they can narrow down a few places based on the theory, they're one step closer to finding Darhk's Ark.

Thea is being held captive under Star City in the Genesis dome, and her father Malcolm has come to see how she's doing. As per usual he tells her he's only trying to keep her safe, but Thea is having no part of Darhk's evil plan. She's shocked that Malcolm is in agreement with Darhk about the world needing a reset, it's crazy pants talk. She demands he take her to see her boyfriend Alex, or deal with her being a total pain in his ass.

Felicity's mum Donna goes to see Quentin Lance, she found an affidavit in his apartment while she was snooping and wants to know what is going on. It states that he didn't know Laurel was the Black Canary, and if he signs it, the force will look past his dealings with Darhk and he can rejoin. Donna tells him that he can't lie about something like this, she's been with a liar before, Felicity's father Noah. She tells him she has faith he'll do the right thing.

Darhk tells Murmur and Brick (Vinnie Jones) that he has a job for them. He wants The Calculator too. Oliver and Diggle are also on his trail, but they're too late. They find his hidey hole, but he's already bolted. Murmur and Brick found him first, and he managed to escape. And judging by the security footage, they don't want his help, they want him dead.

Down in the dome, someone else has made their way in and is taking out guards, looking for Darhk. It's Anarky, or Lonnie Machin, back again after Thea let him escape at Darhk's place earlier on. He was stopped from killing Darhk then by Team Arrow, and he's back on the warpath again.

Felicity's only clue she has managed to get off her dad's computer is a folder called Ravenspur. The name rings a bell, but she can't put her finger on it.

Quentin has changed his affidavit, it now states that he knew exactly who Laurel was and that he thought she was necessary, vital and good. Donna tells him she's proud of him, and Laurel would be too. Seems it's the end of his police career though.

Felicity arrives at Palmer Tech, and the chairman of the board is not happy she has been neglecting her responsibilities. She tells him to wait once more when Donna arrives, and he tells her he hopes whatever is so important is worth it. Donna senses that something is up with Felicity, and she asks her about Ravenspur. Donna tells her it's a cabin that she and Noah used to go when they were together, you know together, together. But she should stay away from anything to do with her father.

Oliver tells Diggle that he's worried that he told Lyla that he killed Andy in self defence. Lying about a big part of your life never works, Oliver would know. Oliver gets a call from Felicity with the location of the cabin.

Once again, Brick has got there first and is after Noah with a team of Ghosts. Brick corners Noah and gives him his gun, to play his favourite game. Brick is famous for letting anyone who can take him down, walk. Obviously no one has succeeded yet. As he goes to hand over the gun, Brick is shot through the wrist with an arrow. Diggle takes out Murmur with a tranq, while Ollie fights the Brick. Noah escapes, and Felicity arrives in the van to pick him up. Oliver and Diggle shoot some flares, and fall back.

Felicity lays it out for Noah, this is business, no feelings allowed. Noah tells her that he knows he's terrible father but he isn't a monster, and he is happy to help. He does need one thing, the quantum subliminal processor that Palmer Tech has developed.

Felicity goes to the lab to lift the processor, but is stopped by the Chairman. The board is unhappy with her commitment to the company, and also with her plans to practically give away their bio-stimulant tech. She's been terminated and he has security escort her out.

Thea finds Alex guiding families to their new homes under the dome, he's still under the influence of Darhk's compliance drug. Malcolm tells Thea about Lonnie, and she's not unhappy about the damage he's done. He's sabotaged the domes air supply, if the nukes blow as things are right now, they will all suffocate. Malcolm needs to use Thea's connection to Lonnie to bring him in and fix the damage.

Felicity tells Oliver and Diggle that she's been fired. Their only option now seems to be to break in to Curtis's lab and steal it. Oliver breaks Felicity and Noah into the building, and to a service elevator. They make their way to the lab unseen, but the codes on the tech safe have been changed after her termination. Noah comes up with a way of frying the electrics, and pretty soon security is on its way. Oliver takes them out, but there's more teams on the way. Felicity can't remove it, but Noah is able to clone the processor and they squeak out before they get busted. Brand new Uber driver Quentin Lance is waiting outside to pick them up.

At the bunker Noah is working on building the processor based of the information he was able to clone. He got about 90% and should be able to work out how to build the rest using glue and Popsicle sticks. Even if they get it up and running, they still need to manually crack each missile code and upload it. They're gonna need a server farm.

Thea goes to the house where the carbon scrubbers are housed, betting that this is place Lonnie is hiding out. Sure enough he has two guards hostage and is threatening to shut the scrubbers down completely. Thea interrupts him, and asks if he remembers her, she's the one that gave him that face after all. She tells him that there are innocent people here, and that she will help him take down Darhk. Just not like this

Malcolm totally ruins the moment as usual and shoots Lonnie with an arrow through the chest. Thea thought she had him but she didn't, the equipment is all rigged with explosive charges, he was gonna blow it all, no matter what.

Felicity and Noah go to the Star City Data Centre, and get to work. Unfortunately, the first thing they do sets off a fail safe in the Rubicon program. HIVE now knows exactly where they are. They have about 90 seconds before they arrive. ARGUS is in position to help, they have gone to Def Con 2. The President being slightly concerned that the fate of the world is in the hands of an IT girl, a hacker and two criminals in Halloween costumes.

Thea and Malcolm disarm all the explosives, and she leaves the house. She finds Alex unconscious on the porch, and Lonnie waiting for her. Once again Thea has screwed up his plan, so he's going to Plan B. He asks her why she is always at the mercy of some guy, she's not a pawn, she's a Queen. They fight, and Alex wakes, shocked to see Thea's fighting skills. Lonnie catches sight of Alex and heads for him, telling Thea that he's going to liberate her. He zaps Alex in the chest with his electric stick (yeah, I dunno what it is), and Thea attacks him and takes him down. But she's too late, looks like poor Alex didn't make it.

HIVE arrives in force, and the plan is to try and buy Felicity and her father enough time. Oliver and Brick fight it out once more, and Diggle tries to stop Murmur from getting in. He gets past Diggle, but they manage to hold off all the other Ghosts. Murmur gets in the lab and shoots at them. Noah dives and saves Felicity from being shot, and takes a hit to the shoulder. Oliver arrives and takes Murmur down, but the distraction was enough. One missile hasn't been overridden and has been launched from Russia.

Felicity is desperately trying to override the missile, while Noah keeps the others from launching. Lyla calls in to report an End Time Event, but there's not enough time to get everyone evacuated. As she works, she gets a notification from the ley line algorithm she set up. A news report has come in the Mayor has evacuated City Hall due to a gas leak. They realise that this is the reason the Ruve Adams wanted to be Mayor of a city they intended to destroy. Access to City Hall, the nexus chamber.

Noah manages to get the remaining missiles on a loop that should hold them for 24 hours and buy them more time. Felicity comes up with the idea of hacking the GPS satellite the missile is working off and shift the location of Monument Point. It works, and the missile shifts its course. But instead of hitting the major city of Monument Point, it makes a direct hit on Havenrock. Maximum yield, tens of thousands of casualties.

Oliver and Diggle get to City Hall and head down as far as they can get. They notice a draft, and open a secret door leading to Darhk's nexus chamber. Darhk is there, and is at the height of his powers after feeding off all the deaths that his nuke just caused. He tells Oliver he's going to need much bigger arrows.

Alrighty. We saw our big bad Damien Darhk twice this episode. But got a whole episode with four other villains no one even cares about. Everyone seems a bit over this storyline, even the destruction of Havenrock failed to stir up much emotion. Two episodes to go, and we better get some Damien Darhk action next week. Enough drawing things out and making things more miserable every week. OVER IT!