Doctor Foster drove me a little over the edge last week, so many conflicting emotions! I'm back with S2:E3, rolling after the break.

We open with Dr. Gemma Foster (Suranne Jones) and ex-husband Simon Foster (Bertie Carvel) in a cafe with their son Tom (Tom Taylor) who has just been expelled from school for beating the ever-luvin shite out of his best friend.

Should we mention that said best friend Max (Frank Kauer) helped get Tom's mom a little bit drunker the other night? And had a super weird chat about Tom hating his mother? Nah, that would just muddy the waters.

It's decided, whatever Simon told his son about Gemma

They'll work together to help their son. We all hate Simon afresh there, don't we? As though it's funny to damage a relationship between a parent and their child(ren) so you can be Number One Parent. THAT GOES FOR YOU TOO, GEMMA. Honestly, you two are exhausting.

This is how much the Fosters hate each other, they can't even agree on who's paying for tea. So much in this one shot: Gemma refusing to let Simon lead, Simon only wanting to lead after he saw Gemma reach for it. Divorce is tough, y'all.

Gemma gets home to find former flame and neighbour Neil (Adam James who is definitely growing on me) collecting his things while estranged wife Anna (Victoria Hamilton) watches and tries to lure Gemma in for a bottle or two of wine. Tom Trouble still carries the day, maybe later.

Gemma chugs a glass of wine then stops herself in time for...Tom to walk in! She's so excited and surprised and happy that we all start fussing with snack trays for Tom so she can settle down a little. She's so happy to see him back! Can she make him something to eat?

He's had a fight with his dad, who wants him to switch schools, just as he's starting to talk the doorbell starts to ring. And ring. Gemma picks up a knife almost absentmindedly at the first bell, which says everything you need to know about how she feels about her ex coming to take her son again.

Simon talks his way into the house, he wants to apologize for upsetting Tom because he doesn't want to hurt him, just HER.

Gemma listens to Simon and Tom argue, there's something with a girl named Isobel (Hope Lloyd) and Gemma just always believes her son. I'm sorry, Simon, but that's kind of her job, and kind of yours too, arsehole.

Gemma freaks us all out by offering Simon a beer, then supper.

He accepts and lies to his new wife Kate about having to work late, don't expect her to believe that, Simon. She heard you make all kinds of those same calls to Gemma back in the day. Gemma runs to set up her cell phone to record but adorable (I mean hawt af by that) James (Prasanna Puwanarajah) calls and RUINS it!

Gemma's "and so it begins" to Simon about "protecting" Kate with lies made us all laugh.

Less hilarious is Simon waxing poetic about screwing Gemma on the counter, she balances a knife and challenges his description of her as a receptacle for his...love muscle? Roots and berries? I dunno, wobblies!

Tom's cell phone has been sitting there tempting both of them the whole time and I will need a reality break for one second. Be right back.

WHAT TEENAGER EVER WOULD LEAVE HIS PHONE IN THE ROOM WITH HIS TWO PARENTS WHEN HE'S JUST BEEN KICKED OUT OF SCHOOL AND HAS SOOOO MUCH TO TALK ABOUT? Ever?? None. Not one teenager would do that, not one PERSON would do that.

I will say that you should never look at someone's cell phone unless you are prepared to see something you will not like. It's the sort of thing that leads to 5 years of pain and a wrenching divorce, or so I hear.

Awkward supper time! Tom's just as weirded out as Simon was: Dad's staying for supper?? And some light chitchat about whether Gemma is an alcoholic and / or a Terminator.

Tom gives an extremely vague excuse for attacking Max. Gemma buys it immediately because it does have to do with Isobel, whom Max likes but doesn't like her talking to Tom. That sounds completely legit to Gemma, who plans to arrange a conference at the school the following day to explain the mitigating circumstances.

Er. You might want to dig a little deeper, there, Gem.

Simon's not paying attention either, he's staring at the water glass he's been given, walking down Memory Lane again.

Y'see, this is why you need to completely redecorate, my lovely Doctor Foster. Break all those glasses into tiny little pieces.

Tom goes to bed and we're at a countdown until Gemma is bent over that counter, yes?

She's managed to set up her cell as camera first, yay! She has to talk him into it a little bit, but it's almost go time when he notices the camera.

But! We're not done?

Are they...fighting? Or fcking? I think both. There's a moment where Gemma steps out of her skirt and it looks exactly as I imagine gladiators looked, sizing up their opponents. And then yes, the fcking. Huh.

They both look very sad and tired after. No witty banter, no eyebrow lifts, just drained at all the hatred and passion expended in one messy fell swoop.

Simon leaves and Anna runs over with her glass of wine seconds later, sometimes a little emotional distance between neighbours is a good thing.

Especially since this neighbour came over earlier and heard Gemma and Simon humping like wildebeasts who hated each other, Anna thinks Gemma has been just waiting for Simon to come back.

Well. She has been living in a timewarp and does think absolutely everything is Simon's fault, so there is that. Anna's moving away, which is why she's being so honest tonight, so, er, fanks? She's not wrong.

Tom pops out of his room just then, whew, thank god for that timing! Anna tells him she's moving, hits him with the divorce and then ask him loudly why he hit Max.

Tom does what we all want to do, walk out on Anna, so she rounds on Gemma: every time her and Simon hurt each other or hump each other, they're destroying their son. And this time she won't be across the street to help.

Oh I'm sorry, was that when you tried to destroy Gemma's career because your husband had a lech for her? That time? When you lied and lied and lied about Simon's affair to cover for him, Anna? Is that the kind of support Gemma can no longer count on from you?

Gemma scrubs herself in the shower and curls up in a ball on her bed, all the hurt in the world in that pose.

Gemma blows adorable James off at school before heading in for another conference with Simon and the principal, it goes about as well as I expected.

Oh, see, Simon sent an email to the principal this morning saying that Tom will be moving to St. Austins, AFTER he specifically told Tom the night before that he would no longer push for that. He apologized! Simon is not to be trusted, y'all.

Simon's not listening to Gemma berate him outside the school either, he just got an email with a video of Tom freaking out and flipping tables at The Courtyard. They race there in separate vehicles, to find Tom, Max and Isobel gone.

It's interesting that Simon is mostly upset because Tom embarrassed him at work, people know he's his son! Maybe if Tom acts bad enough, he'll drop this charade of wanting to care for him and Tom can go back to his mum who actually gives a shit about him and doesn't want to use him for Facebook photo-ops.

Simon insists Isobel is in on things, yelling at Gemma to look at the photos before taking Tom's word for it.

She looks at the photos.

Even though Tom specifically said he and Isobel had never kissed, there are photo after photo of him and Isobel kissing in his photostream and I would love some kind of painless stroke to knock me into a coma for the whole of my boys' teenage years, please. Starting in 4 years and 1 month, fanks.

Ros (Thusitha Jayasundera) is waiting to have lunch with Gemma, her wedding is tomorrow! Gemma blows her off to run after Isobel, which makes me realise maybe Ros isn't the worst. Maybe they're just bad, bad friends.

Oh jayzus wept, they aren't the only bad friends. Isobel explains what set Max off and it's much worse than we had expected. She and Tom had been snogging at the party and he got rough. And then wouldn't stop. He wouldn't take no for an answer and she had to scream and yell and hit him to get him to stop. Isobel only told Max, and that was why he confronted Tom.

Gemma suggests Isobel tell her mum, and lets her know if wasn't her fault, it was Tom's fault and it wasn't okay. Isobel didn't want to get Tom in trouble, that's why she didn't say anything to anyone but Max.

Tom's been hiding at Anna's house, and everyone knew about Isobel. Including Simon, who keeps saying ISOBEL is the problem. What? Oh and the walls in the house are super thin, which I'd suspected.

Tom runs out then, taking a moment to explain to James that his mum and dad are shagging again and everybody older than 14 thinks he's a dick. That seemed...random.

Tom's off to his dad's place with Gemma in hot pursuit, but Kate (Jodie Comer) won't let him in because she's afraid he'll hurt her Amelie. Simon blames it all on Kate but she's not giving in that easily, chirping in with "WE decided!!" in the background.

Oh and here's Gemma. Simon will not allow Tom in the house and he doesn't want to hear anything about Tom overhearing them humping. Gemma warns him that Tom will never forgive him for throwing him out, but Simon closes and locks the door.

Gemma finds Tom watching the video of his blowup and they finally, finally have the talk they've needed since the beginning.

He didn't remember very much about assaulting Isobel, he just wishes they could GO.

Gemma says why not? And so it is, Ros's wedding is attended then the house is on the market and Tom is almost smiling. Goodbye Parminster! A quick text to Simon 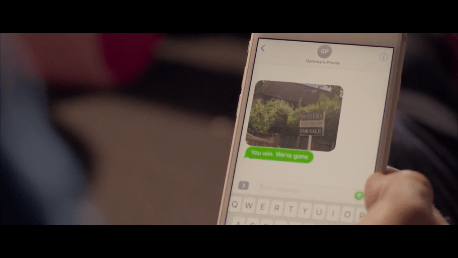 Why...would Gemma do that? She told Tom that she missed Simon "like a husband" but it was only two episodes ago she said she would rather slit her throat. I donnea understand why now it was okay? She seemed..diminished after, and I am pro-sex all the way.

To me, it's worth noting that Simon said "No. Stop" and then had to pull Gemma off of him before they talked things over and decided to bang. If we're talking about consent, there is no way we can ignore that, can we?

Sigh. Life is complicated. Until next time!