Hello!! Can you believe it's week 8 already on the Great British Bake Off?? Me either! I feel like we should have a clear frontrunner at this point but...we don't, do we? Everyone's doing so well, it's like one massive pride of bakers running hand in hand toward the finish line. Let's see who pulls ahead in my recap of GBBO S11:E08 Dessert Week after the break!

Isn't every week Dessert Week on the Great British Bake Off? I mean, really? I'd eat most of it for dessert, or supper, except maybe that stupid green matcha crepe cake. Honestly.

We're off to a rolicking start in the quarterfinals with hosts Noel Fielding and Matt Lucas introducing the Signature Challenge for judges Paul Hollywood and Prue Leith. Our five remaining baketestants will be preparing 12 identical mini cheesecakes.

I used to make an excellent triple chocolate cheesecake regularly for a former partner, I will have all sorts of helpful advice for this one! Yayyy!!

I don't understand what young Peter Sawkins is saying: what does an 'aversion to cheese' mean? Is that like an allergy but just caused by bad taste?

Oh see, what I said about the bakers all being equal is borne out by Paul's math! Every baker in the quarterfinal has been Star Baker and that has never happened before. 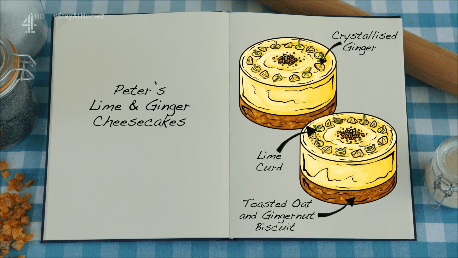 They must have tricky ovens on GBBO, this is not the first time this has happened, even this season.

That happened to our excellent baker who led with Iranian flavour profiles....what was her name...but we didn't get to see it as we did here so I developed a whole conspiracy theory around it.

Good thing Laura has made more of her biscuit bottom! 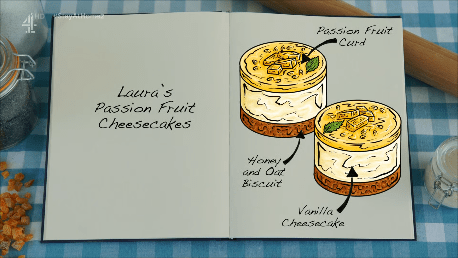 Why is everyone using passionfruit or passionfruit flavouring? I mean, they're absolutely adorable but also inspiring a lot of unexpected...passion in our bakers. Just about everyone is on board, including Dave. 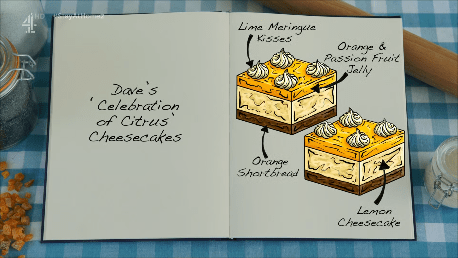 I am all about those lime meringue kisses, what are those going to taste like??

Huh. Hermine's sound an awful lot like Dave's but in jars. 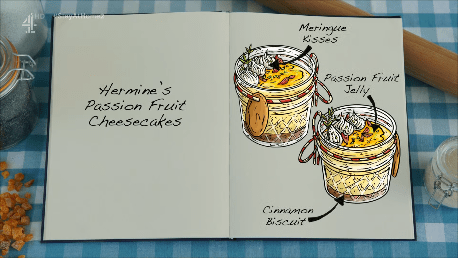 Paul Hollywood says he doesn't even like passionfruit, which would probably have been aces to know previously. Okay, maybe he's joking.

Wait. Where was Marc's design? Did I miss it? Oh there it is, I missed it because Matt was singing and I completely ignored everything on screen. 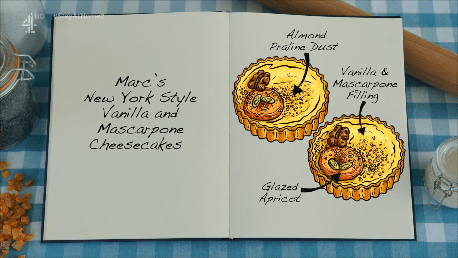 Hm. I may not be a good resource as far as cheesecake commentary goes. There are two methods I've employed to get a lovely cheesecake, nobody is using either here. Either I cook low and slow then let it sit in a cracked oven for an hour or I do that with a water bath. They're using silicone molds, at least one is, and I can't look directly at that baker because I loathe silicone bakeware almost as much as I hate salted caramel.

Okay, Hermine is using a water bath, which is well suited to her tiny jars. Most are also leaving their oven doors open but Dave is inexplicably doing things like throwing his into the freezer. That's literally the opposite of a slow cooling.

Laura's tiny cheesecakes aren't set in their gawdawful silicone molds, even Peter is struggling and that is not the norm for our careful and tidy baker.

I really do favour those, don't I? I can't help it, I've had huge kitchens to tiny kitchens and they all run better if you clean as you go.

I cannot believe how much these people can get done in one single minute, that's when all the decorating magic happens! 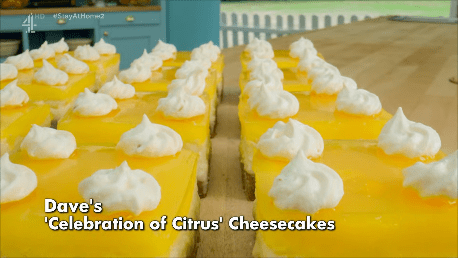 Hermine's are super cute, but there's a part of me that thinks it's cheating to have them served in jars and not free standing like Dave's. His design was much more difficult to execute and her design made her bottom stodgy, so she only gets props for the look of her food. 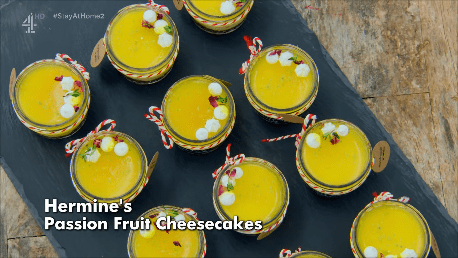 No way Marc's going to get that feedback with his flat discs. It's really his flavours they take issue with, not enough apricot or vanilla. 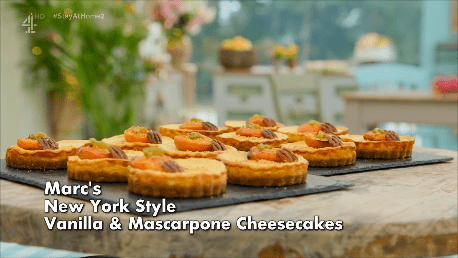 On to these sunken wonders, Peter had to scrap his lime curd and so is short on flavour and cheesecake. Not his best work. 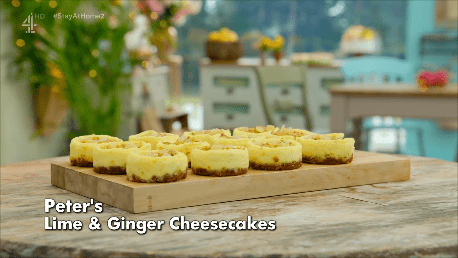 Laura. A mess. Again. And once again she pulls through with excellent flavours but I can't be the only one thinking she should actually complete a whole challenge properly, yes? 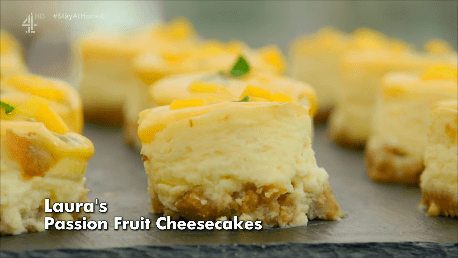 The Technical Challenge this week has been set by Prue, who warns everyone that they will have no extra ingredients to make mistakes with. She's asking them to make two Sussex pond puddings with suet pastry and steamed to a golden brown.

As a North American, I remain bemused by this fascination with steaming things and calling them puddings. 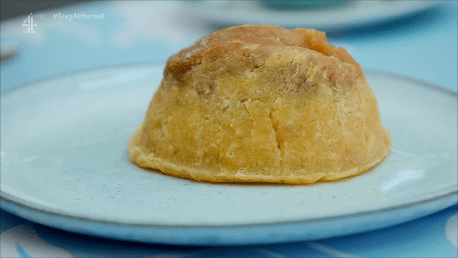 We've got a couple of different methods of pastry making at play, I'm curious to see what comes out ahead. Laura's treating the suet pastry like normal butter or lard pastry, keeping it cold and not overworking it. Dave says he's made suet pastry before and that it needs to be worked a lot until smooth. Interesting!

Eventually, everyone steams their puddings except Dave, who spends a solid 15 trying to figure out how to tie string around a small bowl.

Prue said that everyone needed to steam as long as possible, Dave yanks his out first after going in last. They're a right mess. Ah but so are everyone's, save a single one of Marc's.

Wait. They leave the pricked lemon in there for baking and eating? Gross.

From grossest to bestest, we have:

They were all gross and inedible, hers was just slightly more edible, perhaps because her pastry was better. That answers the question about whether to work suet pastry until smooth, doesn't it?

I wonder what could possibly be the Show Stopper on Dessert Week? Oh. A jelly art design cake. Okay. I guess it's 70s Week too!

Dave is wrong about music and also his state of readiness. 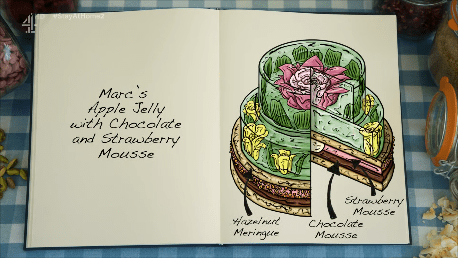 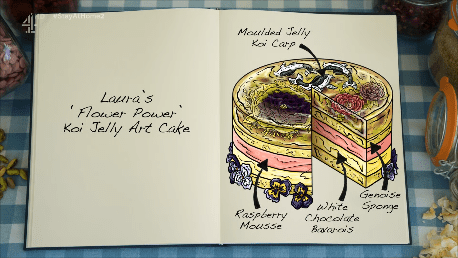 Dave is using chocolate, so I will cautiously approve. 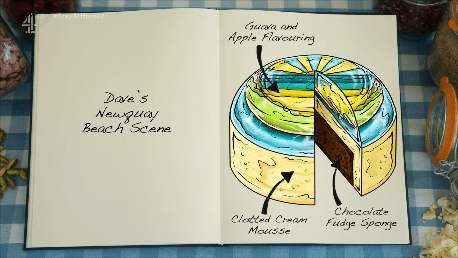 Wait. His dad's dog is named Swayze after Patrick Swayze? I like Dave's dad a LOT.

I don't know why Marc is using a meringue bottom, he's watched them all crack every season on GBBO, right?

Oh no, surely Hermine must have watched too, where using a candied liqueur spells elimination for whichever baker uses it? Oh but I love her design. 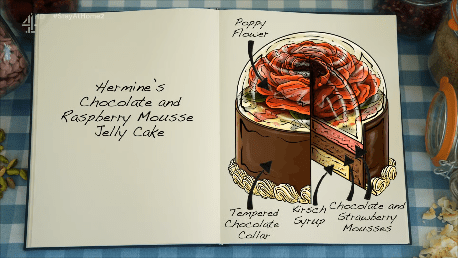 I have been one of Peter's biggest fans all along, but he's sinking this episode and I'm starting to wonder if he's in just slightly over his head? He's got some gorgeous colours picked out. 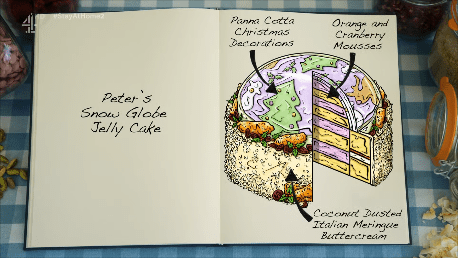 Sometimes language differences can be quite startling.

There's a finite amount of time the outer containers can be set in warm water before removing, will Hermine forget hers for too long?

Oh but the flipping is fraught! We're all holding our breath, aren't we?? Marc has two tiers of the stuff!! Suddenly, time is up and nobody ever has to make a jelly cake ever again, YAY!!!

Do you suppose one of Laura's flowers was supposed to look like a death mushroom? 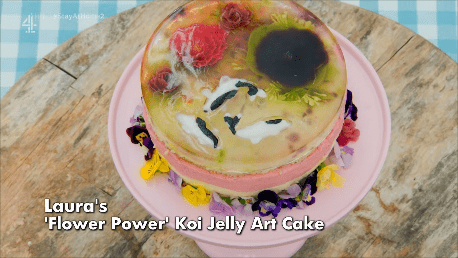 Paul calls it perfect, so what do I know?

Dave's jelly cake matches Prue, hahaha. He's got a fantastic jelly (so he WAS ready for it) but the cake and mousse are not up to snuff. 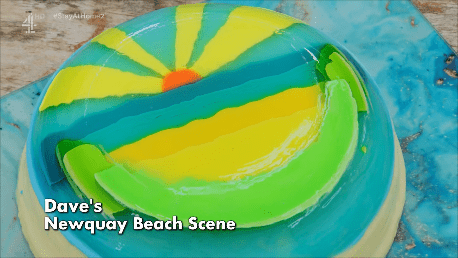 Boy I do not like the look of whatever Peter has done here and unfortunately it's a pastel-coloured dome-shaped ticket home. 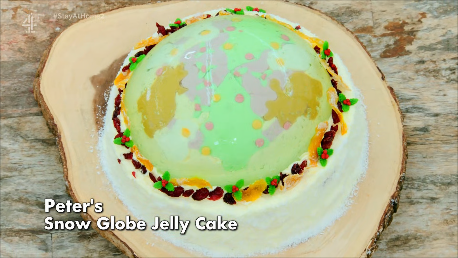 Well. This is quite impressive looking, Marc but it's all bad inside after the wobbly two-tiered bit that will probably save you from going home tonight. 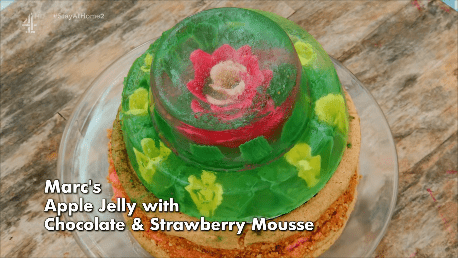 Oh Hermine's was everything I hoped it would be. The judges LOVE her cake! 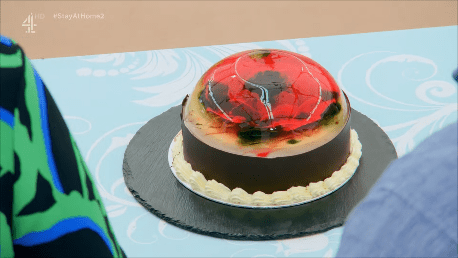 So we know she's probably Star Baker this week and a lock for the semi-finals, who's going with her?

Okay, so she totally is Star Baker, yay!

Leaving us this week: Marc

Oh wow, that caught me by surprise. I thought it was Peter for sure! My goodness. Great job, Marc, I thought you were done for the very first week and you got all the way to a two-tiered jelly cake! Top five in the United Kingdom, Marc, all the best.

Cheers, everyone! Until next time!