We're in the finaaaaalllllleeeee already on the Great Canadian Baking Show, can you believe?? I mean, I've done my part to drag it out (ahem), but we're here and now we're gonna see which one of our top three bakers in Canada (of this season) is going home with the Maple Bacon Toque of Destiny! Rolling into my recap of GCBS S6:E08 Final after the break!

This is it! We're down to our final three bakers of season two: Andrei Gorgova, Megan Stasiewich and Sachin Seth. We went to Vancouver, Leduc and Halifax to gather these lovelies, clear across the country! It really is anyone's game, but I feel as though Andrei has a slight edge over the others for overall proficiency but Megan could take it with her astounding creativity. Let's find out!

Andrei has learned some things:

Megan! Is just happy to be here.

Hosts Dan Levy and Julia Chan are here in the workroom for the last time of season 2 with judges Bruno Feldeisen and Rochelle Adonis. Do you even remember everyone who was on the season in the beginning? I'm going to try to do it from memory:

5th week - Devon Stolz sent home after some smokey butter. Did I tell you guys he emailed me? He's awesome

On to the last Signature Challenge of the year, the baketestants will be preparing 24 mini Swiss Rolls of two different flavours in two and a half hours!

Rochelle explains the most important part: 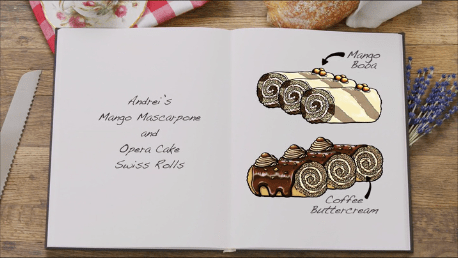 Sure? They sound good, right? 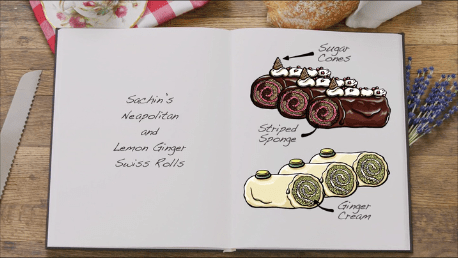 The sponges have to be baked as thin as possible to aid in the rolling process (if Rochelle mentions that swirl again...), Megan has gone for straight pink. 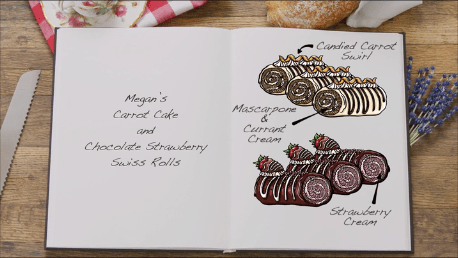 I don't want you three to think you've let me down or anything but.

Baking is done, now it's all about that swiiiirl (no treble). Will they get their cream thin enough to get a tight enough roll to impress Bruno and Rochelle? Can I say anything about this that doesn't sound creepy?

After the rolling comes the glazing and my inner (outer?) fat person is always dismayed by the wasted chocolate pouring onto the racks and sheet below.

Sachin says he's "in the zone" and the universe rewards that confidence with a dropped Swiss roll.

You know I love Megan (and think she should totally win) but she has waaaaaaaayyyyy too much stuff stacked on top of her rolls. Chocolate covered strawberries?? You can't eat those as part of something, there's the stem you have to watch out for, it's...complicated.

Megan's overloaded goodies do well but the chocolate ones are too sweet. 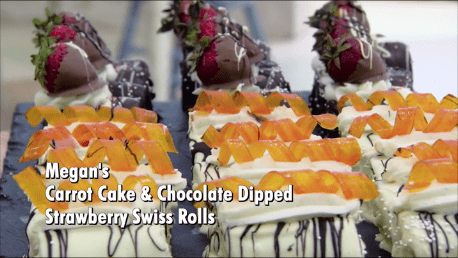 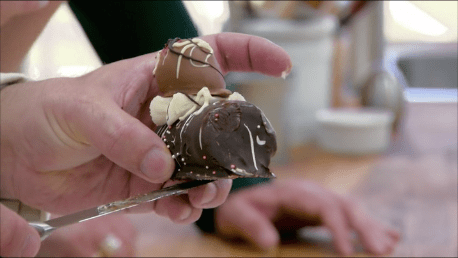 Sachin went minimalist, which really highlights the small mistakes he made along the way. He gets fair to middling reviews. 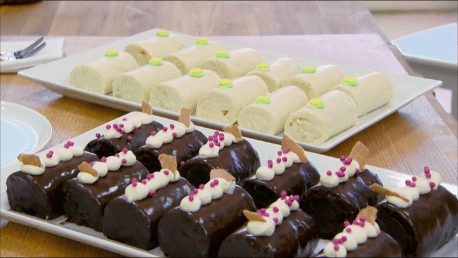 On to Andrei and his dainty goodies are perfectly shaped but lacking a defined swiiiirrllll. 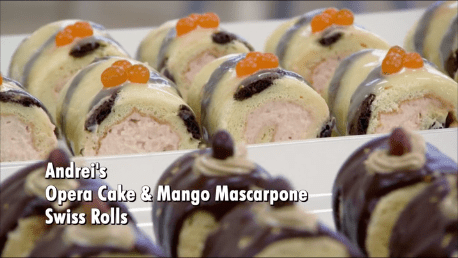 We're not wasting any time getting to the last Technical Challenge of season two of the Great Canadian Baking Show, it's a Swedish Princess Cake! With marzipan. On PURPOSE. 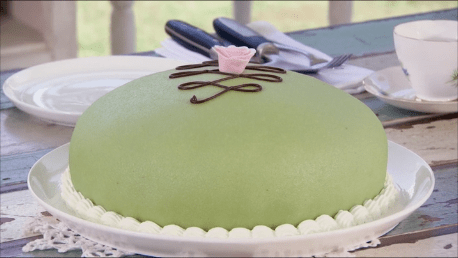 I guess it's pretty if you're the type of princess into mushroom cakes? 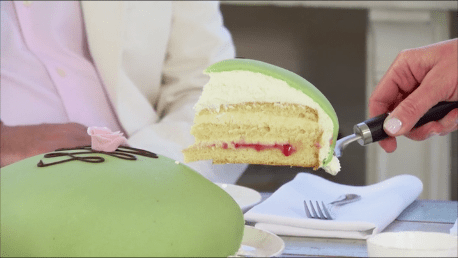 Have I said today that I love Dan Levy? I love Dan Levy. Watching him give Sachin moral support by literally repeating every word he says, but with enthusiasm? Gold.

I think Sachin made his usual mistake of choosing to be *too* subtle with his colouring. I used to call him our Beige Baker but I didn't want anyone to think I was commenting on his skin, which is a lovely tan colour, if anyone cares! It's rather that he tends to make everything sort of beige and boring and he's certainly done that here, muting the green marzipan to barely past yellow.

I think Andrei's is the prettiest green; Megan's is quite...kelly.

Judging! Since there are only three, I can just show you! 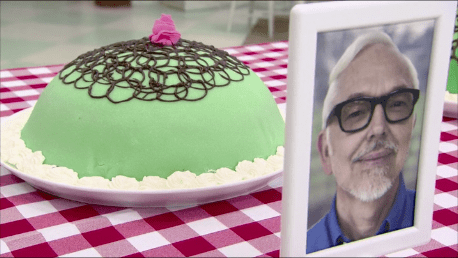 But not quite as well as Megan's gorgeous design. She did that free-hand! 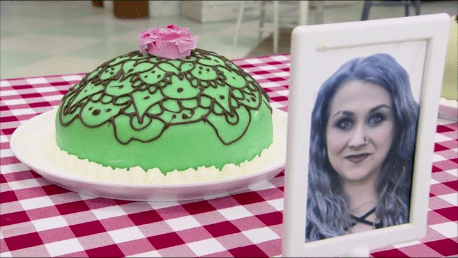 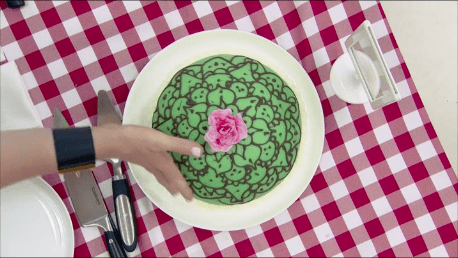 And then Sachin's beige monstrosity. 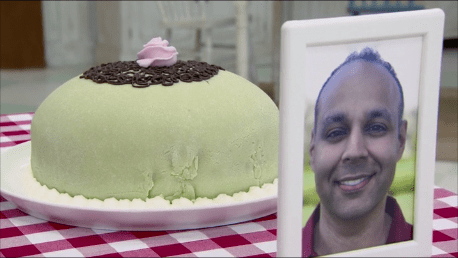 In order of less awesome to most amazing green marzipan-covered atrocity, we have:

We're in our last Show Stopper and last challenge of this weekend, what say you? Let's make a choux pastry tower, sure! At least three stories tall and three flavours? Absolutely! Why not make two different shapes of choux pastry?

In one million years, I would never have thought of an owl sitting on a tree as a model for a choux pastry tower. 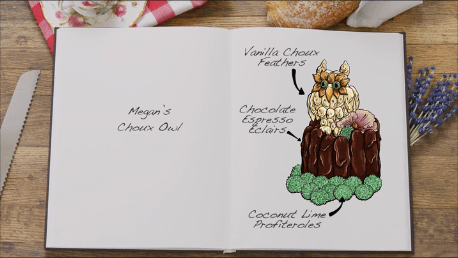 Not even in two millionty years.

Now we're going to cry over watching Megan throughout the competition, she's so young and so traditional and such a good mom and SO MANY TEARS. Her three little boys wishing her luck awwwww man, come on!!!!

See, now here's what I expected to see as a choux tower, Andrei! 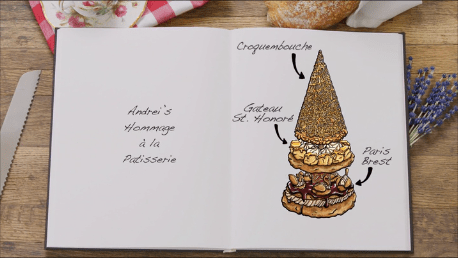 He's using a Paris Brest as the base; someone I work with has said that's his favourite but I've never even heard of it and now I've heard it twice. It's that kind of month!

We get Andrei's much less emotional personal backstory, which makes me feel like a piker. Do I only cry when there are kids?? DO I?? No, wait, I turned into a puddle of mush when Irish Mark L left GBBO a week ago so it can't be that. Maybe it's that Andrei comes across as quite emotionally contained 99% of the time?

Sachin's making an Indian wedding cake to honour his wife and I'm back bawling like a little girl. 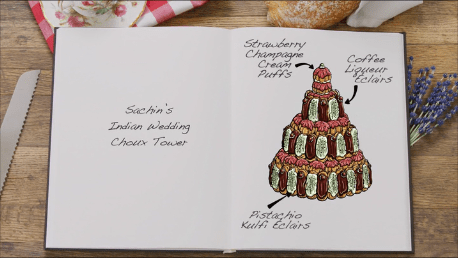 So we cry with his wife as she talks about him being the kindest person she's ever met, "he brings joy" she says as she and we make a mess of our makeup.

It's going to get worse before it gets better, we've got a bunch of family outside, along with previously eliminated contestants like Timothy Fu and my fave Devon Stolz.

Just because it's super hot!

Actually, everyone is back! You remember the candyman, Tim Chauvin and Sadiya Hashmi who was eliminated right.after.getting.Star.Baker, right? Mengling Chan mengles with fellow bakers Wendy McIssac and Ann Marie Whitten who all have differing opinions on who will win.

Before we know it, time is up and we're into our final judging of the season and about to crown Canada's Best Baker of Some Years Past.

Megan's creativity is such that she didn't just take an existing idea and elevate it, she came up with entirely new shapes and ideas and made them into an owl. She just underfilled all her choux buns.

I have to wonder if this can compete with Andrei's traditional and gorgeous effort.

Sachin's wedding cake is lovely, only one filling was slightly underwhelming.

So that's it! Now we find out who won season two of the Great Canadian Baking Show! (Don't tell me if you already know)

The winner is: Andrei Gorgova! Well deserved! He cries and is a loss for words, thank goodness Bruno is ready to step in.

Hahahahaha! Good job, Andrei, all the bakers were amazing but you were like an unstoppable 70s baker extraordinaire!

Until next time, everyone, cheers and full flagons for all!